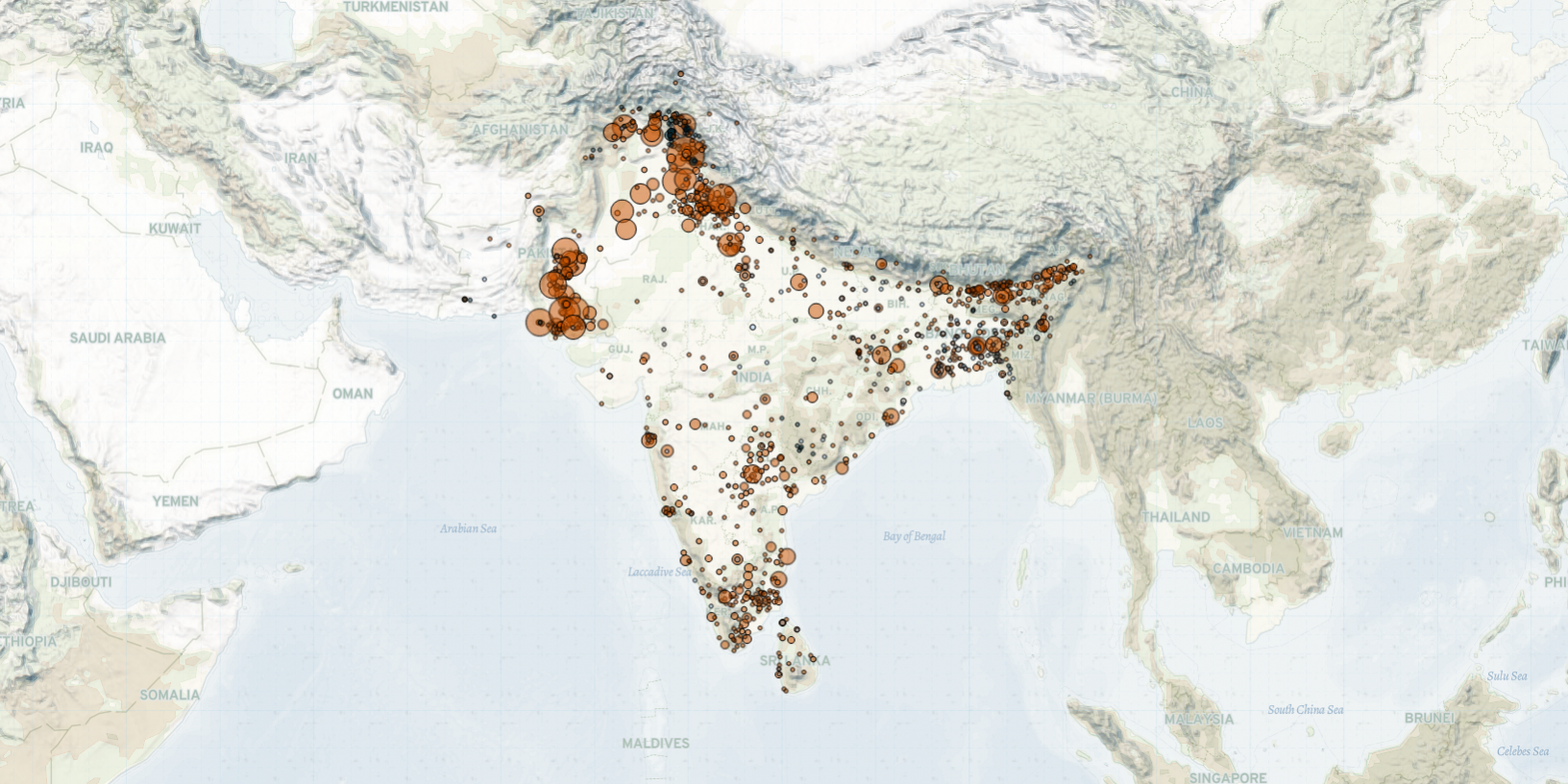 Key trends in South Asia last week include a decrease in cross-border violence between India and Pakistan. There was also a decline in separatist group attacks in Balochistan province in Pakistan. In India, security operations against domestic militancy continued, resulting in the deaths of at least five Islamist militants. Maoist rebels increased their activity in various districts of the Red Corridor and launched attacks on security forces and civilians. Lastly, demonstrations against agricultural reform laws continued in India, leading to the passage of amendment bills in Punjab state to reject the central laws.

In India, security operations against domestic militants continued in Jammu and Kashmir (J&K). Two members of Hizbul Mujahideen (HM) and three Lashkar-e-Taiba (LeT) militants were killed in separate encounters in Pulwama and Shopian districts of J&K during cordon and search operations. Security forces have ramped up operations during the coronavirus lockdown and have killed high-profile commanders from both HM and LeT (for more on the conflict in J&K during the pandemic, see this ACLED COVID-19 Disorder Tracker (CDT) spotlight).

In Balochistan province of Pakistan, separatist group attacks continued though at a decreased level compared to the previous week. At the same time, intelligence-based operations have intensified after Baloch militants attacked an Oil and Gas Development Company convoy, killing at least 14 people the previous week. Security forces carried out an operation based on intelligence, killing four militants from a banned outfit in Mastung district. In Kohlu district, one person was killed and another was injured in a landmine blast. The Baloch Liberation Army (BLA) claimed responsibility for the attack and issued a warning for surrendered former commanders to cease cooperation with the Pakistan army (Balochwarna news, 24 October 2020).

Seven cross-border incidents of violence between Indian and Pakistani forces were recorded last week in J&K, marking a decrease compared to previous weeks. Three Pakistani soldiers were killed during these incidents. The exchanges of fire took place in new locations along the Line of Control (LoC) in the Indian administered Kashmir. These included Malti and Rajpura areas in Poonch and Samba districts, respectively. Despite last week’s decrease in cross-border violence, there has been an overall rise in the frequency of such incidents in 2020 (for more on cross-border violence, see this ACLED mid-year update).

Elsewhere in India, Maoist rebels increased their activity last week in the Red Corridor, targeting both security forces and civilians. In Chhattisgarh state, one Maoist militant and a police officer were killed in two encounters, as Maoists ambushed the District Reserve Guard team. The Anti-Naxal Squad (ANO) and local police teams killed seven cadres of the Communist Party of India-Maoist (CPI-Maoist) during combing operations in Maharashtra and Telangana states. In recent months, ANO and Maharashtra Police have intensified anti-Maoist operations (Orissa TV, 18 October 2020). Last week, Maoists killed two civilians and assaulted two others in Jharkhand and Odisha state on the suspicion of being police informers. One of the attacks may have been related to the recent recovery of seven IEDs planted by Maoists along the Odisha-Andhra Pradesh border. As a result of increased anti-Maoist operations, the rebels have reportedly resorted to targeting local communities to punish police informers (Hindustan Times, 23 September 2020).

Finally, in India, farmer demonstrations continued primarily in the north against three new farm laws. Demonstrators have expressed apprehension that agricultural reforms would lead to a disintegration of the minimum support price system and exploitation by corporations (BBC News, 25 September 2020). Nine farmers have died since the beginning of the demonstrations in mid-September. One of them died by suicide and the others succumbed to health complications during sit-in demonstrations (Indian Express, 20 October 2020). Last week, demonstrations were particularly frequent and large in Punjab state. The Punjab Assembly passed its own amendment bills, rejecting the central government’s three farm laws. The amended bills focus on the protection of livelihoods of local farmers, noting they lack negotiating power in private markers due to the small size of their operations (Indian Express, 25 October 2020).