Religion and Politics: Demonstrations in Montenegro

In 2019, the promulgation of the new Religious Freedom Law sparked mass demonstrations across Montenegro led by the Serbian Orthodox Church. The church felt unfairly targeted by the law, which would potentially enable the state to seize Serbian Orthodox Church property. The demonstrations ultimately led to the victory of a group of opposition parties — consisting most prominently of the pro-Serbian coalition For the Future of Montenegro — in the August 2020 elections. The coalition unseated the Democratic Party of Socialists (DPS), which had dominated the country’s politics for the past 30 years. The DPS is a leading supporter of Montenegrin political and cultural independence from Serbia. The new law and subsequent demonstrations leading to the rise of the pro-Serbian opposition have deepened Montenegro’s ethnic divides and set the stage for further unrest.

Montenegro has a complex ethnic makeup, which has left it vulnerable to the current political crisis. According to the most recent census, around 45% of the population consider themselves Montenegrin, while 30% identify as Serbian (MONSTAT, 2011). However, more people list “Serbian” as their mother tongue than identify as Serbs (MONSTAT, 2011). The Serbian Orthodox Church is continually listed as one of the most respected institutions in the country. The rival Montenegrin Orthodox Church, which is not canonically recognized, is considered one of the least respected institutions in the country. Many view it as a state-building institution rather than a purely religious institution (CEDEM, 2020).

Milo Đukanović, the current leader of the formerly dominant DPS, is a populist who has been in power in some capacity since 1989. His government has been described as increasingly authoritarian by international observers (Freedom House, 2020). Đukanović’s rise began when he became the chairman of the Montenegrin Communist League, then the highest-ranking position in the country in the late 1980s. During the 1990s, Đukanović became president. Since that time, he has switched between the positions of prime minister and president. In 2018, Đukanović won the presidential election by a landslide, with no serious opposition.

In December 2019, the Montenegrin government introduced a bill, called the Religious Freedom Law, which worsened divisions between ethnic Serbians and Montenegrins. The bill gave the state more power to monitor the financial transactions of religious communities, which are currently exempt from taxes. The most controversial element of the new law, however, was the fact that properties owned by religious institutions since before 1918 — when Montenegro obtained official statehood by joining the Kingdom of Serbs, Croats, and Slovenes — would be transferred to the state, unless their ownership by the church could otherwise be proven. The Serbian Orthodox Church claimed the law was a direct attack on them, as they are the only religious group with property that fits the criteria in the law. They also criticized the bill as unconstitutional, as it aims to seize private property and transfer it to the state (RFE/RL, 28 December 2019).

The adoption of the law sparked mass demonstrations across the country (see map below), headed by the Serbian Orthodox Church. The demonstrations continued for months. Though coronavirus restrictions initially led to a steep drop in demonstration activity, demonstrations soon resumed despite the pandemic. They continued into the summer of 2020. Most demonstrations were peaceful prayer processions. 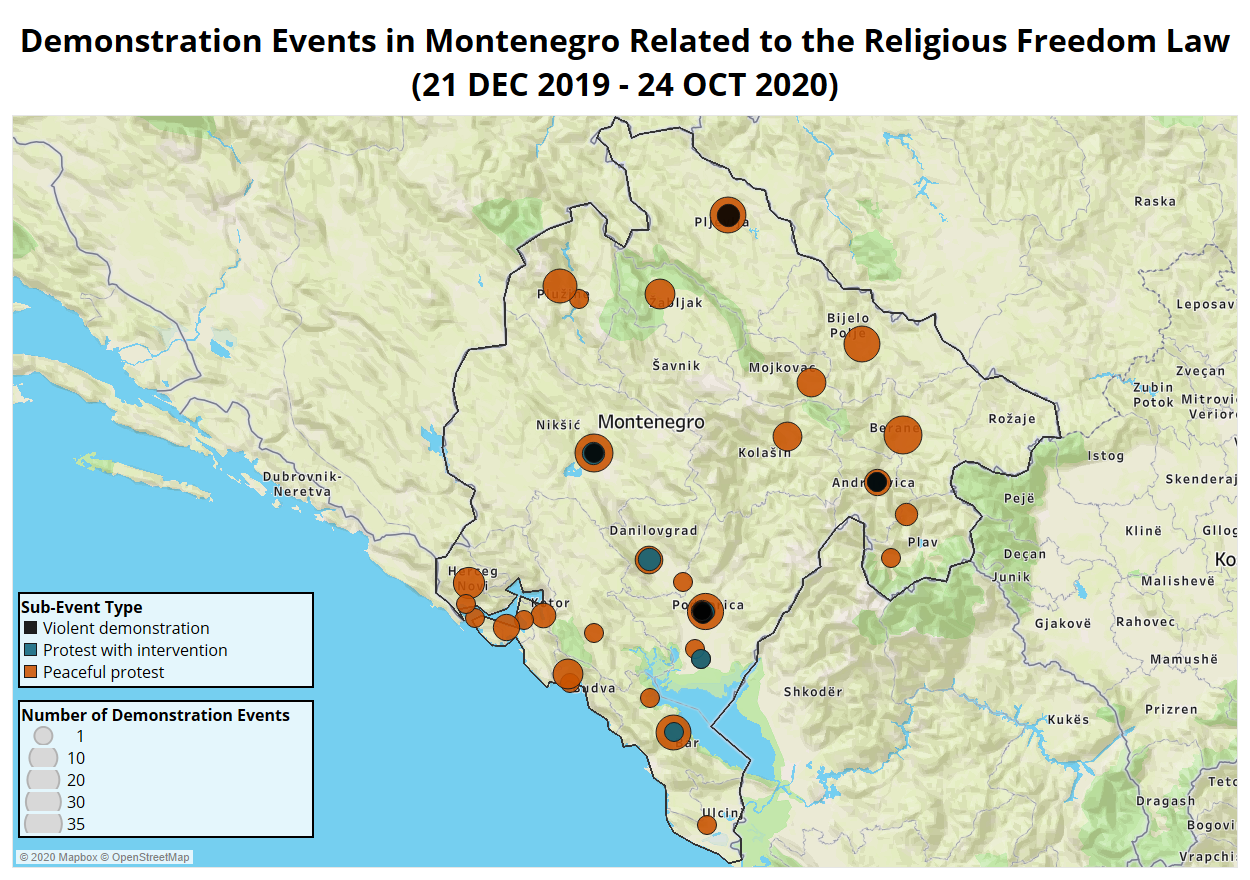 For the first time in its history, the DPS lost power following elections on 30 August, likely due to the Serbian Orthodox demonstrations. Ahead of the elections, a high-ranking bishop of the Serbian Orthodox Church invited people to “vote against evil,” taking an open stand against the DPS. The DPS won 35.06% of the vote, one seat short of being able to form a government on its own. A coalition of opposition parties, led by the pro-Serbian For the Future of Montenegro, began talks around forming a government and promised to annul the Religious Freedom Law. The last demonstration directly related to the Religious Freedom Law took place on 28 August (see figure below). 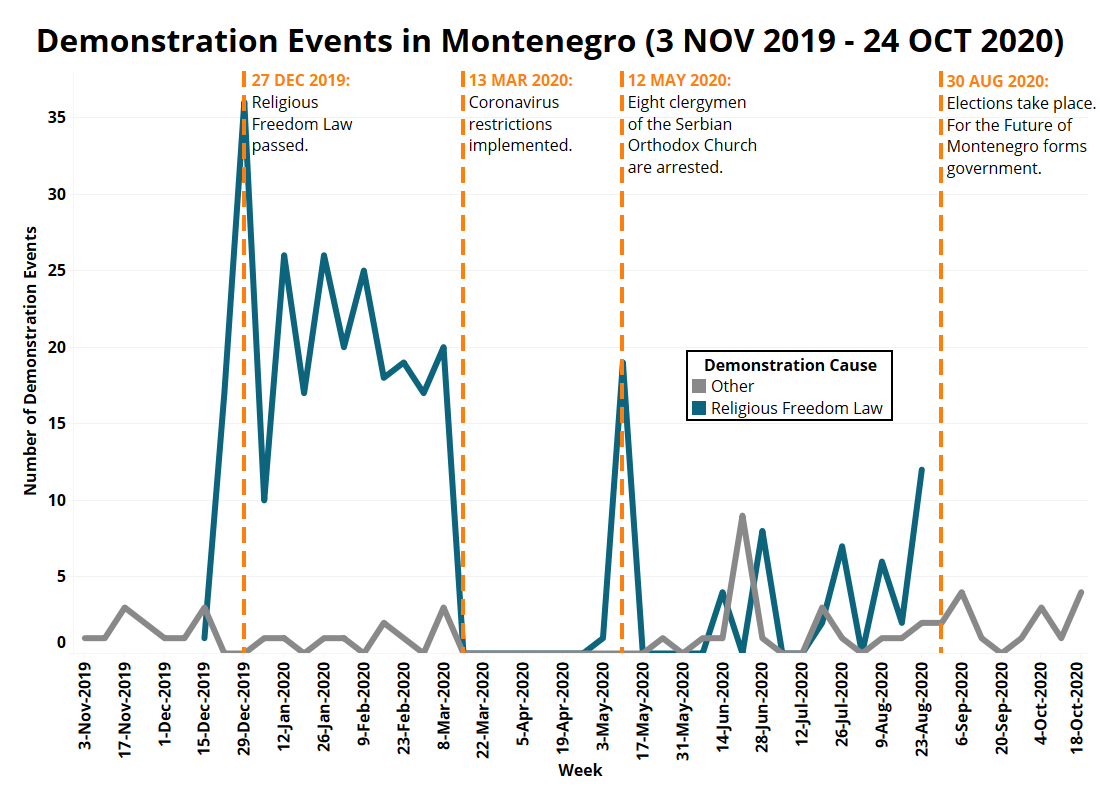 A week after the election, tens of thousands of people opposed to the new government attended a rally for the “unity of Montenegro” and “against the use of Serbian national symbols” (RFE/RL, 7 September 2020). While this large demonstration did not spark a major movement — likely due to the ongoing negotiations over the formation of a new government — it is a potential indicator of a looming public backlash against pro-Serbian forces in Montenegro. However, public opinion is still shifting as the country prepares for its first major democratic change of power.

As shown by the past half year of demonstrations, the political situation in Montenegro remains quite tense. The new government will likely face ongoing political unrest as it attempts to address the core issues around Serbian and Montenegrin identity, as well as the role of the Serbian Orthodox Church in Montenegro.