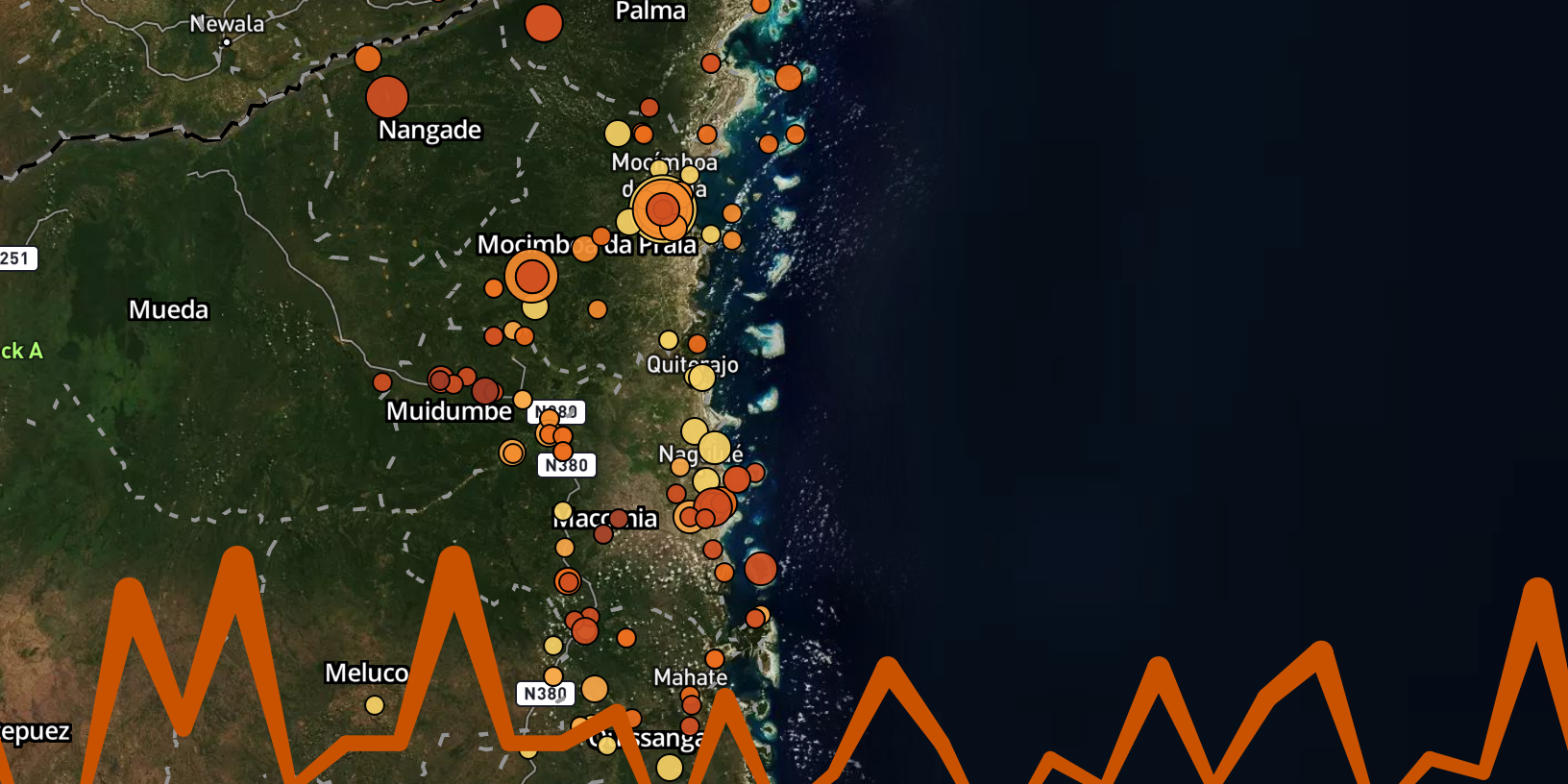 The battle for the road between Palma and Mueda continued last week, starting with a 2 November insurgent attack on Pundanhar, Palma district. Several houses were burned in the attack, and five civilians were kidnapped.

At the same time, insurgents were in the midst of a four-day occupation of Muatide, Muidumbe district. According to a Pinnacle News report, insurgents used Muatide as a base from which they carried out attacks against young men involved in initiation rites. Fifteen boys and five adults from the 24 de Marco village were reported decapitated, and their bodies brought to the soccer field at Muatide. Pinnacle also reported that another 24 youths and six adults from other areas of the district were beheaded during the occupation, and their bodies similarly gathered at Muatide. Pinnacle later reported that many other civilians had been killed at Muatide. There is no confirmed final death toll, and sources can only confirm the targeting of male initiation rites and the initial report of 20 deaths at 24 de Marco.

On 4 November, insurgents raided Nampanha, Muidumbe district, about 10 kilometers south of Muatide, destroying houses and looting food and other goods. Civilians managed to escape the village before the raid, and no one was killed.

The next day, insurgents struck the village of Nanjaba, Macomia district, which sits roughly 15 kilometers northeast of Macomia town, along the road between the district capital and Mucojo. The attackers burned down nearly the entire village, and people who escaped the raid heard that two civilians were decapitated and six — all women — were kidnapped. Despite Nanjaba’s proximity to Macomia town, there was no response from government security forces.

From Nanjaba, insurgents continued eastward to Napala, an important rice production center in Macomia district, in the early morning of 6 November. There, the insurgents burned down homes and killed three people.

Government forces and associated militias were also in action last week, including once against one another. On 3 November, 16 vehicles that had been unable to reach Palma from Nangade due to insurgent attacks near Pundanhar were able to make it through to Palma with support from Dyck Advisory Group helicopters. The vehicles were carrying goods that were much needed in Palma. Resupply has become difficult there since the insurgent occupation of Mocimboa da Praia and attacks near Pundanhar have made the main overland routes to the town dangerous to pass.

Those same helicopters, along with ground forces, evicted insurgents from Pundanhar town after a three-day occupation. The dates of the occupation are not clear from initial reports, but the pro-government website Notícias de Defesa claimed that the operation against Pundanhar took place on 3 November and killed 33 insurgents.

On 4 November, a government-associated militia in Muidumbe district reportedly captured three insurgents in the district. The militias paraded the three men through various villages in Muidumbe, before publicly torturing and beheading them.

The next day, a militia in Lutete, Muidumbe district ambushed a group of Mozambican soldiers, believing them to be insurgents. No casualties were reported, and the soldiers withdrew to Mueda. The incident underlines some of the risks of the government’s increasing turn to arming local militias: government forces have little to no command and control capability over militias, and the level of distrust sown by the insurgency in the conflict so far works against the likelihood of effective cooperation between militias and government troops.

New information has emerged about the 31 October insurgent attack on Muambula, Muidumbe district. Insurgents occupied the Catholic parish church in nearby Nangololo, where they destroyed a community radio station based there. Nine journalists working for the station fled, and are still in hiding and running low on supplies.

A boat carrying 74 refugees from conflict-stricken northern districts to Pemba capsized on 30 October near Ilha Makalowe. Fifty-four people drowned, including 11 children. The incident is the deadliest shipwreck of the Cabo Delgado conflict, but it is hardly the first. As violence has intensified and overland travel has become more difficult, more refugees are traveling along the dangerous coastal route to Pemba. Among other accidents that have taken place, an unknown number of civilians died when a boat leaving Pangane, Macomia district for Ilha Matemo wrecked on 1 October. On 13 August, government forces sank a boat full of refugees fleeing Mocimboa da Praia district shortly after the district capital fell. Forty civilians died as a result.

Despite these dangers, alternatives for refugees are only narrowing. For people who attempt to shelter in place on the edge of the conflict zone, health concerns loom. The government admitted last week that 60 people have died of cholera on Ilha Matemo, where refugees remain as they are still barred from entering the relative safety of Ibo. Government health teams cannot get to Ilha Matemo due to the security situation and insurgents have stolen medicine kits sent to the island, according to a government spokesman. Even among those who have found their way to Pemba, 92 have arrived with cholera, likely contracted from having to stay in overcrowded areas during the journey.

Some people had used a northern escape route to find safety across the border in Tanzania, but now that insurgents are launching attacks into Tanzania, they are not being allowed to stay. Tanzania deported 830 refugees back to Mozambique in early October, and last week reports came through that more refugees were sent back shortly thereafter, taking the total number deported to over 1,000. Eight of the deported refugees tested positive for COVID-19 upon their return to Mozambique. The Mozambican government has made no public objection to the deportations, leaving refugees with one fewer possible destination as they attempt to escape the violence. As more routes to safety close, more people will be forced to attempt the sea route to Pemba.

COVID-19 is hitting soldiers as well as refugees. A new outbreak in a military barracks in Montepuez helped push the number of confirmed COVID-19 cases in Cabo Delgado province to 156. No details of the outbreak are available, but just as the true rate of COVID-19 infection among the civilian population is likely higher than has been reported, the chance that the disease can spread among soldiers living in close quarters is high.

Soldiers and civilians in northern Cabo Delgado also remain without power, Carta de Mocambique reports. The district capitals of Mocímboa da Praia, Palma, Nangade, and Mueda have all been in an effective blackout since the insurgent occupation of Mocimboa da Praia began in early August. Electricidade de Mocambique, the state electrical utility, has twice attempted to fix the power grid, but has been driven off both times by insurgents. Palma is still able to function on solar power and generators due to an emergency fuel supply from natural gas investor Total, but gasoline prices have become very high.

The power grid is so difficult to fix because insurgents still occupy Mocimboa da Praia town and the surrounding area, a reality that the government has been reluctant to admit publicly. However, a new parliamentary report on the situation in Cabo Delgado, which has not been publicly released, acknowledges that insurgents still hold Mocimboa da Praia, suggesting a distinction between the government’s public comments and private assessments of the situation. The report, which was written by the interior and defense ministries, also highlights the many human rights violations insurgents have committed during the conflict. As expected, however, the ministries found no evidence that government forces committed any human rights violations whatsoever, despite overwhelming evidence to the contrary. Renamo members of parliament boycotted the report, decrying the lack of investigation of government crimes.

Opposition MPs also voted against a revised national budget last week, which passed despite their objections. The new budget expanded overall state spending to cope with the COVID-19 crisis and the conflicts in Cabo Delgado and the central provinces. Security services saw the single largest budget increase, with an extra $24.5 million for operations and $73.5 million for “investment.” The added money is both an acknowledgement that the Cabo Delgado conflict is likely to drag on and a signal that Mozambique will attempt to add to its technical capabilities in the near future.

On the international front, Mozambican Prime Minister Carlos Agostinho do Rosário met with Tanzanian President John Magufuli following Magufuli’s inauguration to a second term. Neither disclosed details of their discussion, but Agostinho do Rosário said they touched on the Cabo Delgado conflict and the displacement crisis. According to one source, cross-border security cooperation between Mozambique and Tanzania is improving.

Around 2 November 2020, at least 20 people (including 15 teenagers) were beheaded by insurgents. Their bodies were found in a forest area in the Muidumbe district (Cabo Delgado). The teenagers were participating in a male initiation ceremony. 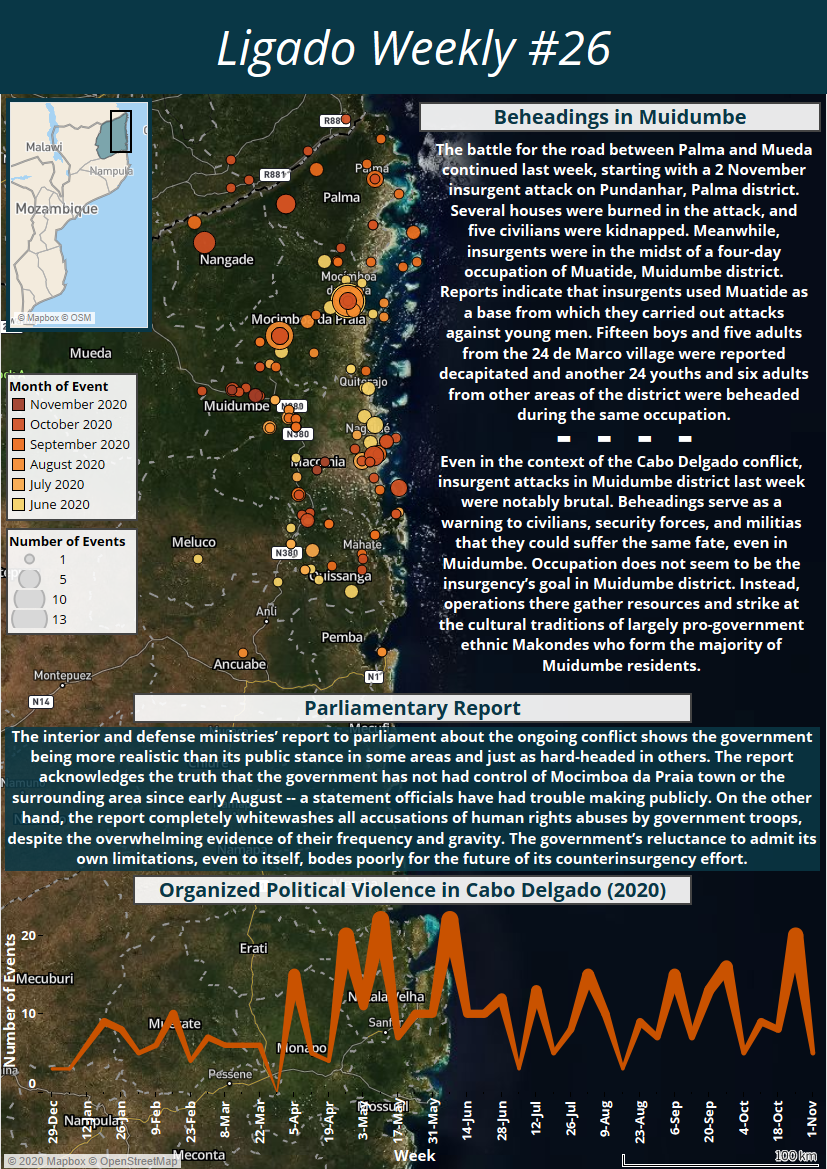