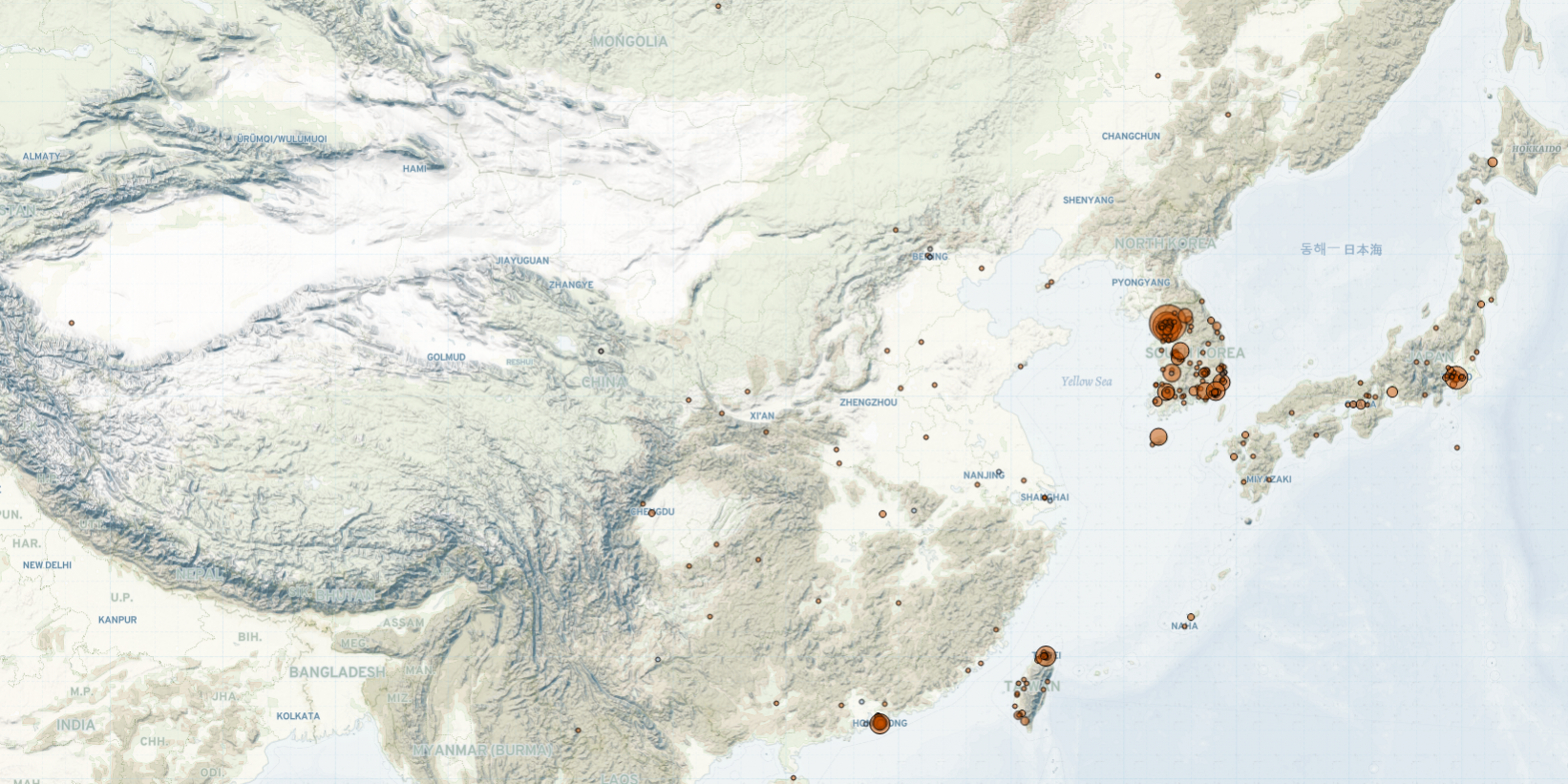 Last week in East Asia, hundreds of supporters and activists gathered outside a court in China for the hearing of a landmark sexual assault case. The court hearing was a rare case of a sexual assault being tried in court since the emergence of China’s #MeToo movement in 2018. In Hong Kong, three pro-democracy activists have been sentenced to jail terms after they pleaded guilty to charges for their roles in organizing an anti-extradition bill demonstration last year. In North Korea, anti-aircraft guns were deployed on the border with China in another attempt by the government to prevent border crossings. In South Korea, protesters called for a harsher sentence for the former president, Chun Doo-hwan, who received a suspended sentence for defaming a witness who testified in the Gwangju Uprising trial. In Japan, people took to the streets to protest against a bill that would increase medical expenses for retirees. Lastly, in Mongolia, business owners urged the government to provide support for businesses affected by coronavirus restrictions.

In China, supporters and women’s rights activists staged a protest in Beijing to show support for a female sexual assault victim, who filed charges in 2018 against a state television anchor for sexual assault during her internship. The case has been credited as pioneering China’s then-emerging #MeToo movement (South China Morning Post, 2 December 2020). In 2018, when the term “sexual harassment” was still a fresh addition to the public discourse in China, the victim’s confessional online post prompted thousands of survivors of sexual harassment to come forward (BBC, 3 December 2020). The landmark case has since garnered considerable attention and the verdict is highly anticipated in a country where it is rare for such cases to be heard in court. Analysts opined that the outcome of the case could define the future of the #MeToo movement in China (BBC, 3 December 2020).

In Hong Kong, three prominent pro-democracy activists, including Joshua Wong, were sentenced to jail terms between 7 and 13.5 months. The trio pleaded guilty last week to charges of inciting people to besiege police headquarters during an anti-extradition bill demonstration last year (The Standard, 2 December 2020). During the hearing, hundreds of supporters gathered outside the court to express solidarity with the trio and their support for the “Five Demands” movement (for more on Hong Kong demonstration trends, see this recent ACLED infographic). A smaller group of pro-establishment supporters were also present at the same time, calling for heavier sentences to be given to the activists (Hong Kong Free Press, 2 December 2020).

Meanwhile, also in Hong Kong, three masked men hurled nine Molotov cocktails into the car park of the Police Sports and Recreation Club. This marked the first such incident after the National Security Law was passed in June (South China Morning Post, 2 December 2020). Police are investigating if the incident was prompted by the arrests of seven citizens and student activists the night before. Arrests had been made after the group staged a demonstration in support of the 12 Hong Kong fugitives, who have entered their 100th day of detention in Shenzhen after being caught while fleeing to Taiwan (The Stand News, 30 November 2020).

In North Korea, it was reported last week that, in mid-November, anti-aircraft artillery battalions were deployed to the northern border in North Hamgyong and Ryanggang Provinces to further prevent border crossings (RFA, 2 December 2020). This move follows previous measures – such as reinforced border patrols, “shoot-on-sight” orders, and landmine deployment – meant to deter citizens from attempting to flee to China amid harsher living conditions caused by the pandemic.

In South Korea, Gwangju citizens and activists staged a rally asking for a harsher sentence for the former president, Chun Doo-hwan, who was found guilty of defaming a witness in a trial regarding the 1980 Gwangju Uprising. The witness testified that civilians were shot from helicopters by soldiers commanded by Chun during the pro-democracy uprising (Korea JoongAng Daily, 30 November 2020). The former president denied the shootings occurred, calling the witness a “shameless liar” (Yonhap News Agency, 30 November 2020). Although the former president was sentenced to eight months in prison with a two-year suspension, demonstrators are calling for a heavier punishment and demand a public apology.

Also, in South Korea, despite a spike in coronavirus cases and government guidelines (BBC, 6 December 2020), the Korean Confederation of Trade Unions (KCTU) and the Federation of Korean Trade Unions (FKTU) held a series of protests over labor rights. The KCTU urged authorities to revise the so-called Jeon Tae-il Three Labor Laws. Meanwhile, the FKTU also urged the government to abolish laws that violate basic labor rights and to ratify the International Labor Organization (ILO) core conventions. South Korea has been under pressure to ratify the core conventions of the ILO, with the EU and the UN Committee on Economic, Social, and Cultural Rights both calling for the country to comply with the international instruments on corporate violations of human rights (The Korea Herald, 7 July 2020).

In Japan, protesters, including senior citizens, gathered outside the Ministry of Health, Labour, and Welfare for three consecutive days to voice concerns over a bill that could increase medical expenses for senior citizens. The ruling Liberal Democratic Party (LDP) plans to double the share of costs paid into the country’s healthcare system by income-earners over the age of 75 from 10% to 20% by 2022. The move comes as the healthcare system is facing increased pressure due to the country’s aging population. Protesters are concerned that the increased cost would place an unnecessary burden on the elderly and detrimentally impact their quality of life (Shimbun Akahata, 5 December 2020). The LDP argues that this is unlikely as the change only applies to those whose yearly income exceeds approximately 1,700,000 Yen (roughly $16,355 USD) (Sankei Shimbun, 5 December 2020).

Lastly, in Mongolia, entrepreneurs and business owners demonstrated in Ulaanbaatar, demanding financial compensation from the government to mitigate the effects of the COVID-19 lockdown on their businesses. The protesters demand that the Prime Minister take concrete actions, including halting required payments for rents, bank loans, and interests (Udriin Sonin, 2 December 2020). The protest comes amid an extended lockdown in the capital and in two other provinces facing a surge in locally transmitted cases of COVID-19 (News.mn, 1 December 2020).