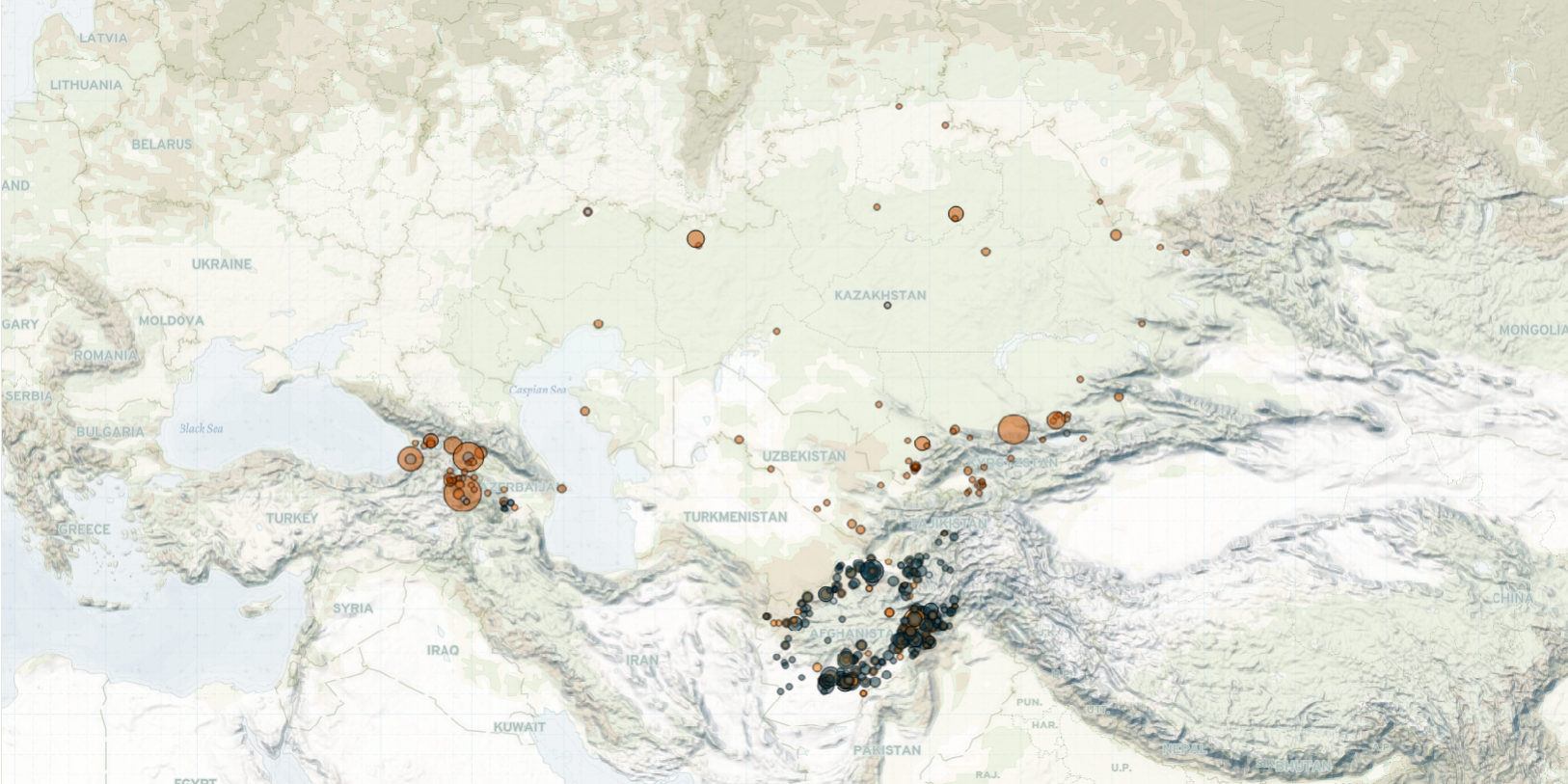 Last week in Central Asia and the Caucasus, US forces targeted the Taliban with an airstrike in Afghanistan. The Islamic State (IS) likewise attacked Kabul with rockets for a second time within one month. For the first time since the ceasefire, the forces of Azerbaijan and the de facto Artsakh Republic exchanged fire over two villages near the former territories of the de facto republic, now seized by Azerbaijan. In Georgia, following the political crisis over the contested election results, the ruling party, Georgian Dream, started the parliament without the opposition lawmakers; meanwhile, in Kazakhstan, the new parliament will be formed without opposition, as no opposition party is going to take part in the upcoming parliamentary elections. In Kyrgyzstan, despite the opposition’s protests, the parliament scheduled a referendum on constitutional changes.

In Afghanistan, the fighting between Afghan forces and the Taliban continued at a slightly lower level compared to the week prior. This is partially due to a decrease in airstrikes by Afghan forces. US forces, meanwhile, conducted airstrikes in Zhari district of Kandahar province last week, where intensive fighting has been ongoing for over a month. Nearly 30 Taliban militants were killed. The Taliban condemned the attack, claiming that it violates the US-Taliban deal known as the Doha Agreement, which was signed on 29 February. The Taliban also state that the airstrikes killed 10 civilians, a claim rejected by the US. The agreement allows the US to target Taliban fighters in defense of Afghan troops (Ariana News, 11 December 2020). Additionally, last week the Taliban recaptured Deh Rahwod district of Urozgan province, a week after Afghan forces had regained control over the district. The district has largely been under the Taliban’s control since 2018, but both Afghan forces and the Taliban have been actively contesting control since October 2020. Deh Rahwod shares borders with Kandahar and Helmand provinces, where the Taliban has also been launching a high number of attacks against Afghan forces.

Meanwhile, IS fired a number of rockets on Kabul city and Hamid Karzai International Airport, where at least one civilian was killed. IS carried out a similar attack on the capital last month, an indication that despite its lack of control over territory, it still poses a major challenge to peace in Afghanistan.

Lastly, the peace talks have been paused for the next three weeks in Doha by the mutual decision of the Afghan government and the Taliban early this week (VOA, 14 December 2020). As the levels of violence fluctuate, yet have remained high throughout 2020, the intra-Afghan talks will be decisive in determining the course of violence in Afghanistan in 2021.

In the Caucasus, for the first time after the ceasefire agreement of 9 November, which was signed between Armenia and Azerbaijan, clashes took place in two villages in the southern part of the de facto Artsakh Republic. Authorities of Armenia and the de facto Artsakh Republic reported that on 11 and 12 December, Azerbaijani forces attacked Artsakh military force positions in Khtsaberd and Hin Tagher villages in the former Kashatagh region of the de facto Artsakh Republic. The region was partially transferred to Azerbaijan after the agreement. However, these two villages have remained under the control of Artsakh forces. Six soldiers were wounded. Azerbaijani officials stated that the exchange of fire was a result of an anti-terrorist operation, claiming that the Artsakh soldiers had attacked Azerbaijani soldiers and civilians in the weeks prior (Ministry Defence of Azerbaijan, 13 December 2020). The fighting stopped as Russian peacekeeping forces negotiated with both parties to end the exchange of fire (EA Daily, 13 December 2020). Following the incident, a protest took place near the Russian peacekeepers’ headquarters in Stepanakert, with demands to protect the villages from Azerbaijani attacks. In Azerbaijan, pro-government media and some politicians blame Russia for taking action in favor of the Artsakh side (Eurasianet, 15 December 2020).

Separately, joint opposition forces continue to protest in Armenia, demanding the resignation of Prime Minister Nikol Pashinyan for signing the agreement ending the war in the de facto Artsakh Republic. Throughout last week, concurrently with those in Yerevan, similar opposition protests also took place in a number of cities; in one case, heads of nearby settlements also joined the protest. Protests in support of Pashinyan were also reported in Yerevan and a number of other cities and villages.

In Georgia, the crisis between the ruling Georgian Dream and the opposition deepened last week after the latter contested the results of the parliamentary elections on 31 October. During the week prior, the two sides had held another round of meetings. While they were expected to come to a compromise, they did not (BBC, 11 December 2020). As such, the lawmakers from the Georgian Dream started the new parliamentary session without the opposition. Simultaneously, opposition representatives signed a joint memorandum to give up their parliamentary mandates, demanding new elections. Following this latest deadlock, over ten protests were organized in Tbilisi and other cities last week, demanding the cancellation of the elections. The rounds of talks between the ruling and opposition parties, which are being mediated by the EU and the US, have failed to deliver a solution to the deadlock, and disorder in Georgia is likely to continue into 2021 (RFE/RL, 11 December 2020).

In Kyrgyzstan, the parliament, led by the acting president, Sadyr Japarov, approved holding a referendum on constitutional changes. The referendum will be organized on the same day as the presidential elections on 10 January 2021. However, the opposition continues to protest against the legitimacy of such changes being made before the acting parliament has been replaced by an elected government (HRW, 21 December 2020)

Lastly, in Kazakhstan, campaigning for the parliamentary elections scheduled on 10 January 2021 started without any opposition parties on the ballot. In November, the All-National Social Democratic Party, the only registered opposition party in the country, announced a boycott of the upcoming election, as they do not believe that the elections will be fair (RFE/RL, 10 December 2020). This development is likely to create a wave of opposition protests in Kazakhstan, where distrust towards the government, along with economic hardships as a result of coronavirus measures, have already triggered many protests throughout 2020.