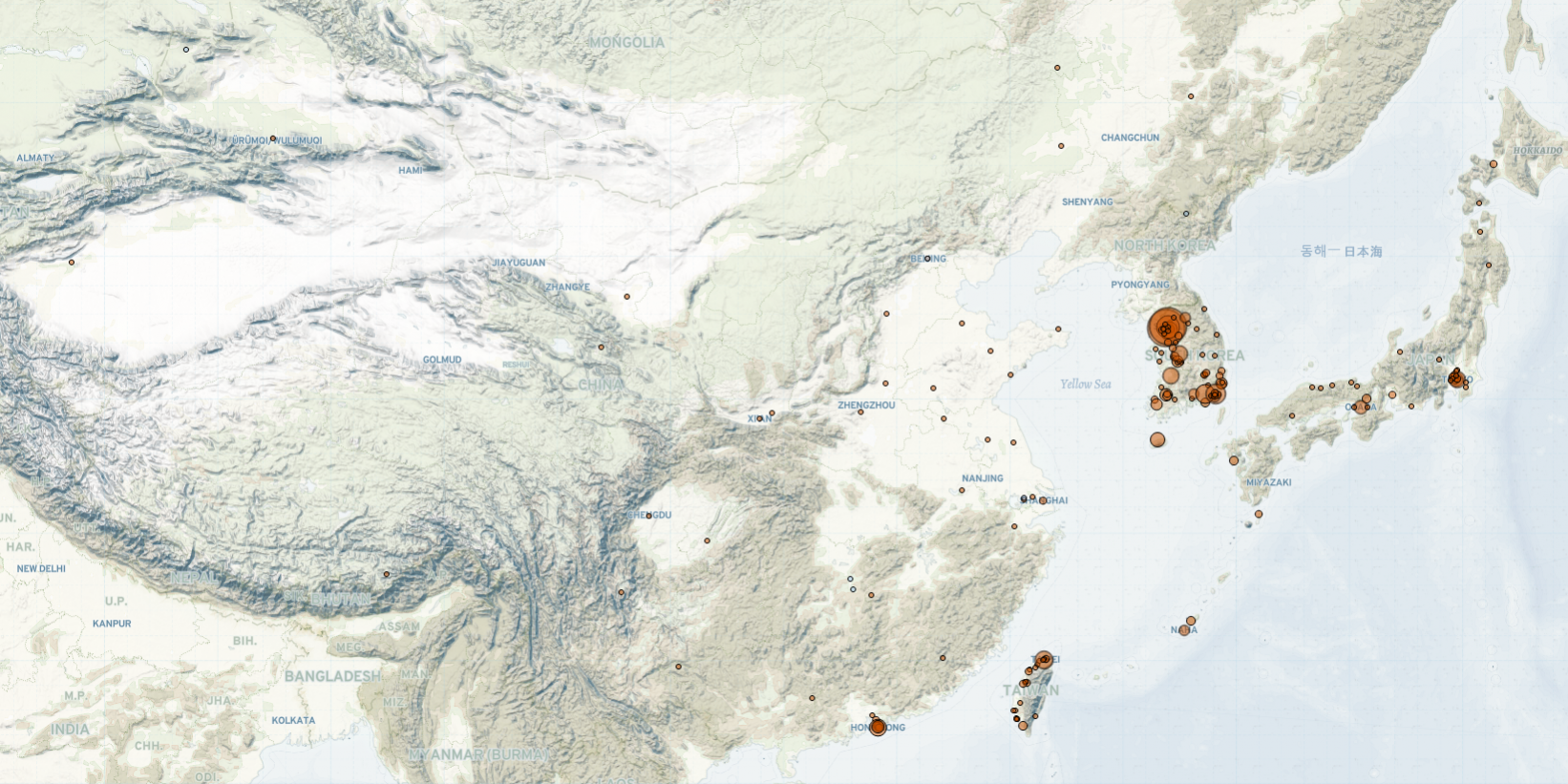 Key developments over the past month in East Asia include a sweeping crackdown in Hong Kong involving the arrest of over 50 pro-democracy politicians and activists charged with violating the recently passed National Security Law. In North Korea, 20 people associated with the nuclear program were arrested in an apparent attempt to instill fear among officials ahead of the Party Congress. In South Korea, business owners protested, criticizing the government’s handling of the pandemic. Labor groups and families of industrial accident victims demonstrated in support of the enactment of the Corporate Manslaughter and Corporate Homicide Act. In Japan, the Prosecutors Office decided not to indict former Prime Minister Shinzo Abe over allegations of unreported political funds. Lastly, in Taiwan, the main opposition party started to collect signatures to reverse the government’s decision to allow pork imports containing ractopamine from the US.

In Hong Kong, the most significant development by far was the arrest of over 50 pro-democracy politicians and activists in a sweeping crackdown on 6 January. Those arrested were detained under the new National Security Law on suspicion of subversion for their role in organizing unofficial election primaries to select pro-democracy candidates to run in the now-postponed 2020 Legislative Council election (HKFP, 6 January 2021). The overarching goal of the primaries was to unite pro-democracy groups into a single coalition and to use strategic voting to secure a legislative majority. Dubbed by pro-democracy groups as the “35-plus plan” and a “10-step mutual destruction scheme,” authorities alleged that the scheme was aimed at paralyzing the Hong Kong government, with a view towards subverting state power (The Standard, 8 January 2021). The “35-plus plan” refers to the pro-democracy camp’s efforts to secure at least 35 seats in Hong Kong’s 70-seat Legislative Council. According to authorities, the “10-step mutual destruction plan” included mobilization of mass-scale riots and calls for international sanctions, which would “result in serious damage to society as a whole” (Hong Kong Government News, 6 January 2021).

The operation has sparked outrage in the pro-democracy camp, which has criticized the arbitrary enforcement of the National Security Law (SCMP, 8 January 2021). The arrests also prompted protests from pro-establishment groups calling for the disqualification of the arrested district councilors. The groups also demanded amendments to the swearing-in process for district councilors, including a requirement to take an oath when they assume office (HKFP, 7 January 2021). At present, under Article 104 of Hong Kong’s Basic Law, the requirement to take an oath to uphold the Basic Law and swear allegiance to the Special Administrative Region does not apply to civil servants or district councilors (RTHK, 12 January 2021).

In North Korea, 20 key persons involved in the nuclear program, including the head of a bureau in charge of the nuclear program, were arrested on charges of possession of foreign materials (Daily NK, 8 January 2021). During multiple raids, agents from the Ministry of State Security found external hard drives containing South Korean movies and TV programs and other devices and materials banned in North Korea. The arrests of these prominent figures may have been carried out to instill fear in party members ahead of the Eighth Party Congress, which convened on 5 January (Daily NK, 8 January 2021).

In South Korea, numerous rallies were staged over the past month in response to the government’s coronavirus guidelines. Business owners, ranging from proprietors of private educational institutions to gyms and ski resorts, protested to voice their concerns over the government’s stringent coronavirus distancing restrictions (The Korea Times, 4 January 2021). They asked the government to provide tax exemptions and financial relief for rent payments. It is expected that the grievances felt by different groups will continue to grow as the government has extended the strict social-distancing rules until 17 January, as the daily toll of coronavirus cases hits a record high in South Korea (KBS, 2 January 2021). Additionally, human rights activists took to the streets to urge the government to improve health services for socially disadvantaged groups, as well as to provide improved free meal services for homeless people.

Also in South Korea, members of the opposition Justice Party and families of industrial accident victims started a sit-in in front of the National Assembly on 11 December (The Hankyoreh, 11 December 2020). They urged the government to enact the Corporate Manslaughter and Corporate Homicide Act, a law initiated by the Justice Party in June 2020, which has until now been shelved due to resistance from corporations. The bill gives companies more responsibility for serious injuries and deaths of employees in the workplace. With around 2,000 yearly deaths from corporate manslaughter (i.e. severe accidents in the workplace) in recent years, the Korean labor community has argued that penalties for the employers responsible are insufficient (The Hankyoreh, 24 November 2020). However, the finalized legislation on 6 January was criticized by both labor and business groups (KBS, 7 January 2021). The Justice Party, along with labor groups, criticized the bill for its exemption of any businesses with fewer than five employees. Organized business groups protested against the legislation due to the increased burden it would place on business owners. Despite this, the bill passed as drafted in the National Assembly on 8 January (The Korea Times, 8 January 2021).

Lastly, in South Korea, the Seoul Central District Court ordered Japan’s government to pay reparations to twelve victims who were forced into sexual slavery during World War II. The Japanese Prime Minister rejected the court’s ruling, stating that the issue has already been resolved (South China Morning Post, 8 January 2021). This development might spark further protests on the issue of ‘comfort women’ in South Korea, as the issue has already been the source of regular protests in recent years.

In Japan, the Tokyo Public Prosecutors Office decided against indicting former Prime Minister Shinzo Abe over allegations of misappropriated funds. Known as the cherry blossom viewing party scandal, the former Prime Minister has been accused of illegally using funds for dinner party receptions for his supporters. The Office announced that it would instead indict Abe’s secretary for violation of the Political Funds Control Law, asserting that he failed to keep proper financial records of the events. The resulting public outrage amongst citizens critical of the former Prime Minister generated over 200,000 tweets in a large online campaign voicing opposition to the Prosecutors’ decision (Asahi Shimbun, 25 December 2020). Though waning over time, the scandal has repeatedly returned to the public eye over the past two years, and it is likely to keep resurfacing (Japan Today, 24 December 2020). The wider complications of the decision may also reach current Prime Minister Yoshihide Suga, who was a close confidant of Abe and has come under fire by many of the same groups, often over similar issues.

Also in Japan, during the first week of January, there was a slump in protests amid the intensifying spread of the coronavirus, especially in the Tokyo capital region. The Japanese government declared a state of emergency in Tokyo and surrounding areas on 7 January, enforcing previously optional public health measures, including business closures. The state of emergency is planned to continue until 7 February (FNN, 7 January 2021). The government is further discussing harsher penalties in cases of non-compliance, which resulted in a reactionary protest in Tokyo on the day of the emergency declaration (Japan Times, 8 January 2021). Protesters insisted that the government should focus on supporting businesses affected by the pandemic instead of penalizing them (Japan Times, 8 January 2021). The emergency declaration is expected to expand to other areas with high infection rates, such as Osaka (FNN, 7 January 2021). If this were to happen, it would likely further fuel protests against pandemic mitigation measures.

Lastly, in Taiwan, ahead of the lifting of the ban on US pork imports on 1 January, the main opposition party Kuomintang (KMT) launched a last-minute bid to lead protests to express opposition against pork imports containing ractopamine. While the controversial feed additive is used in the United States, it is banned in the European Union and China over food safety concerns (Focus Taiwan, 5 January 2021). On 5 January, the KMT announced that they had begun collecting signatures in the second stage (1.5% of eligible voters, or around 290,000 people) needed to initiate a referendum to overturn the government’s decision to lift the ban (The Diplomat, 9 January 2021). As one of Taiwan’s top export markets, the lifting of the ban was considered an important first step in paving the way for a broader trade agreement with the United States.