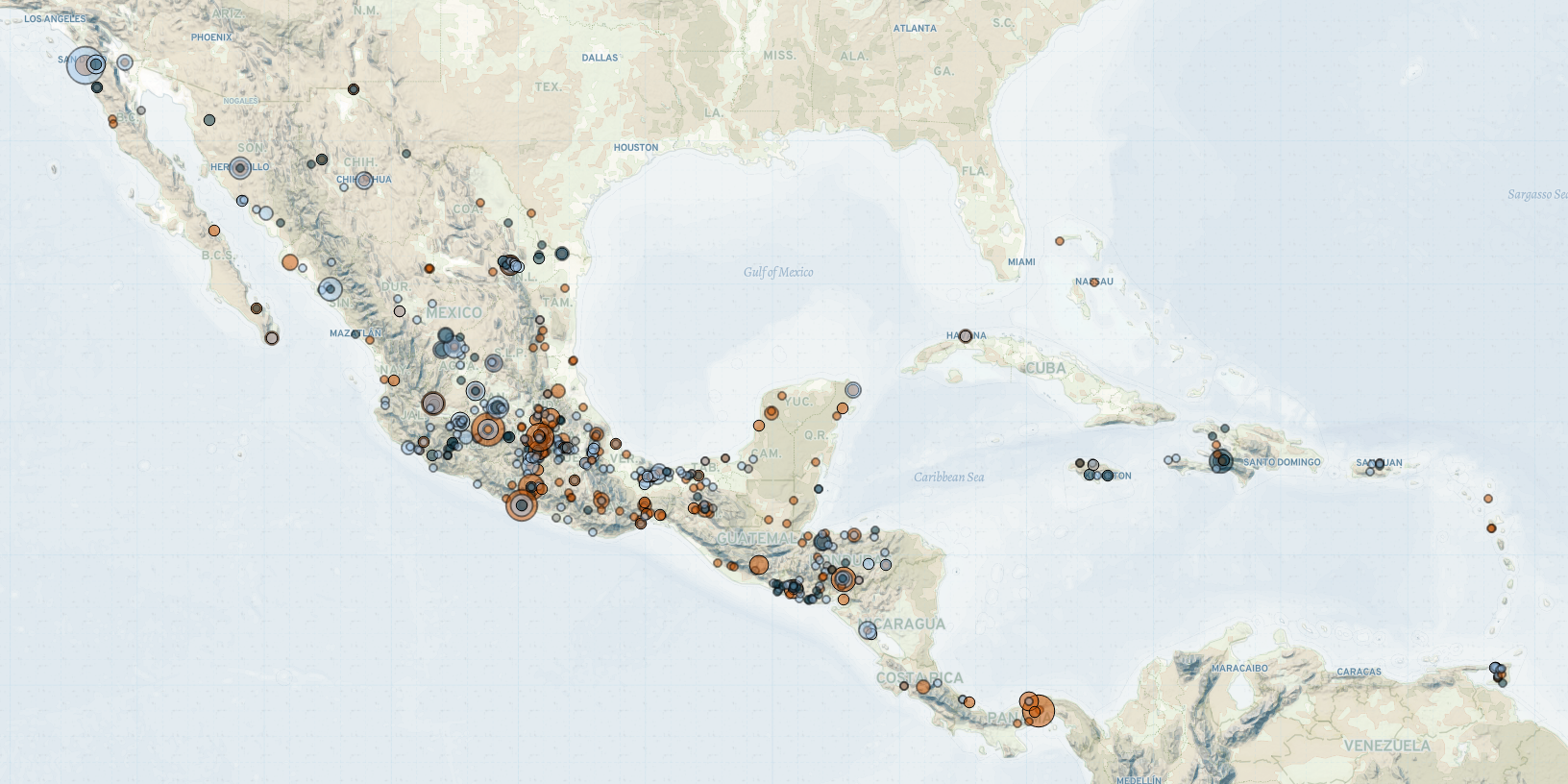 Over the past four weeks in Mexico, Central America, and the Caribbean, political violence and demonstrations decreased. However, attacks against politicians and former government representatives continued in Mexico with the killing of two candidates running for mayor, a former governor, and a former mayor. Meanwhile, in Nicaragua and Honduras, members of the opposition and environmental activists continue to be the targets of direct attacks. In Haiti, law enforcement launched a security operation in the Village de Dieu neighborhood in Port-au-Prince to curb gang violence following the burning of police vehicles. Although there was a sharp decline in demonstrations throughout the region, workers and students demonstrated in Guatemala, Honduras, Panama, and Mexico to demand the payment of end-of-year bonuses and financial support against a backdrop of rising coronavirus cases.

In Mexico, gangs continue to target politicians and former government officers. In recent weeks, a higher number of attacks were recorded in the state of Guerrero against politicians with the killing of two National Regeneration Movement party (MORENA) candidates running for mayor in the Pilcaya and Uxpanapa municipalities by armed men. In addition, the former mayor of Zitlala municipality, who was running for mayor in the Taxco de Alarcon municipality, was shot and injured by alleged gang members in a drive-by shooting. This upsurge of targeted violence is likely connected to the upcoming federal elections scheduled for June 2021. Gangs seek to influence election results through the killing and intimidation of candidates standing against their activities. In the six months leading up to the July 2018 federal elections, ACLED records over 200 attacks against politicians and government representatives.

Reports of assassinations of current and former mayors who either favor or hamper cartel activities are common. Similar attacks were reported in the state of Jalisco, with the killing of the former governor of the state by more than ten armed men suspected to be members of the Jalisco New Generation Cartel (CJNG). During his term in office, the former governor led several security operations against the CJNG (Infobae, 31 December 2020). The state of Jalisco is coveted by several narco trafficking groups for its strategic access, which allows for the shipping of chemical precursors needed for the production of methamphetamines. Meanwhile, in the neighboring state of Michoacan, equally central to gangs’ interest, the former mayor of Aquila was killed by armed men on 5 January. The victim’s alleged ties with the Knight Templar Cartel, a splinter cell of La Familia Michoacan (Infobae, 6 January 2021), likely brought him the wrath of a rival armed group.

In Nicaragua, opposition members and journalists continue to be the targets of attacks perpetrated by state forces and pro-government militias. In two separate attacks, members of the National Unit Blue and White (UNAB) — an opposition movement that emerged during the 2018 anti-government demonstrations — were beaten by law enforcement officers during alleged security operations. Likewise, a journalist was beaten by police officers while another reporter was attacked and interrogated by members of a pro-government militia. Both journalists have criticized President Daniel Ortega’s government and have previously been victims of threats and attacks. Last month, the number of attacks against political opponents in Nicaragua doubled compared to the previous month, with at least eight attacks reported. Repression has escalated in recent months with the approval of a law that prohibits critics of the government from running for president or other public office (AP, 21 December 2020).

In Honduras, violence against indigenous leaders continues with at least two attacks reported over the past four weeks. On 26 December, a leader of the Lenca indigenous group was killed by armed men in La Paz department. Three days after this attack, a member of the Tolupan indigenous group was also killed in Yoro by unknown perpetrators. The member of the Lenca community had previously reported death threats following lawsuits where he represented the interest of his community against mining and hydroelectric companies working in La Paz. Several conflicts over the use of land and natural resources between private companies backed by political elites and environmentalists and indigenous groups have increasingly turned violent. In 2020, ACLED records at least nine attacks against members of indigenous communities and community leaders. In Central America, Honduras is one of the countries with the highest number of killings targeting environmental activists (Global Witness, 29 July 2020).

In Haiti, a law enforcement offensive against gangs continued with a new operation in the Village de Dieu neighborhood in Port-au-Prince. The operation follows several attacks perpetrated by the G-9 gang — a coalition of several gangs, allegedly backed by the government — against police vehicles in the same neighborhood. In response, the prime minister promised increased measures against gangs. The operation led to daily clashes between police forces and gangs during the third week of December, although no arrests nor fatalities were reported. The Village de Dieu neighborhood had previously been controlled by Arnel Joseph, the notorious leader of the Village de Dieu gang who was arrested in 2019 (VOA News, 24 July 2019). His second-in-command, Adisson Maf, was arrested in November 2020 (Haiti Press Network, 29 November 2020). The increased activity in the Village de Dieu neighborhood could be connected to the weakening of the Village de Dieu gang leadership following these arrests, especially as the G-9 gang continues to expand its territory and wage a war on rival gangs who refuse to join the coalition. In April last year, the minister of justice threatened gangs in Village de Dieu with security actions. Former police officer Jimmy Cherizier, the leader of the G-9 alliance, then committed to clean up the area (Human Rights Watch, 28 April 2020).

The government claims that the operation was a success and drove gangs out of the neighborhood (Alterpress, 4 December 2020). Meanwhile, videos of gang leaders rapping were widely shared on social media shortly after the raid (Le Nouvelliste, 7 December 2020), suggesting that gang structures were not threatened and that the security incursion might have been a media stunt.

In Panama, construction workers and members of the Single Union of Construction and Associated Workers organized several roadblocks to protest against the government’s decision to postpone the resumption of economic activities. Since March 2020, the government has suspended more than 270,000 construction contracts as part of measures to prevent the spread of the coronavirus (EFE, 31 December 2020). Similarly, students clashed with police officers while demonstrating against a decree that excludes people under the age of 25 from receiving a bonus as part of a national aid program to support people during the pandemic (La Prensa, 17 December 2020). In recent months, Panama has reached a record level of coronavirus cases and ranks second in the region in the number of cases, after Mexico (Reuters, 14 January 2021). To curb the pandemic, the government introduced new lockdown measures between 4 and 14 January (CNN, 8 January 2021).

Meanwhile, in Guatemala, Honduras, and Mexico, health workers have organized strikes and have protested against their current working conditions. With 2020 ending, many nurses and doctors failed to receive their end-of-year bonus, long promised by their respective governments for their efforts during the pandemic. In Honduras, nurses hired during the pandemic demanded permanent contracts as the Honduras National Association of Nurses reported a staff shortage of around 36% nurses nationwide (Proceso Digital, 28 October 2020). In Guatemala, despite a decline in demonstrations after anti-corruption demonstrations took place in November, the number of demonstrations spiked again in the last week of December as health workers demand payment of their end-of-year bonus.