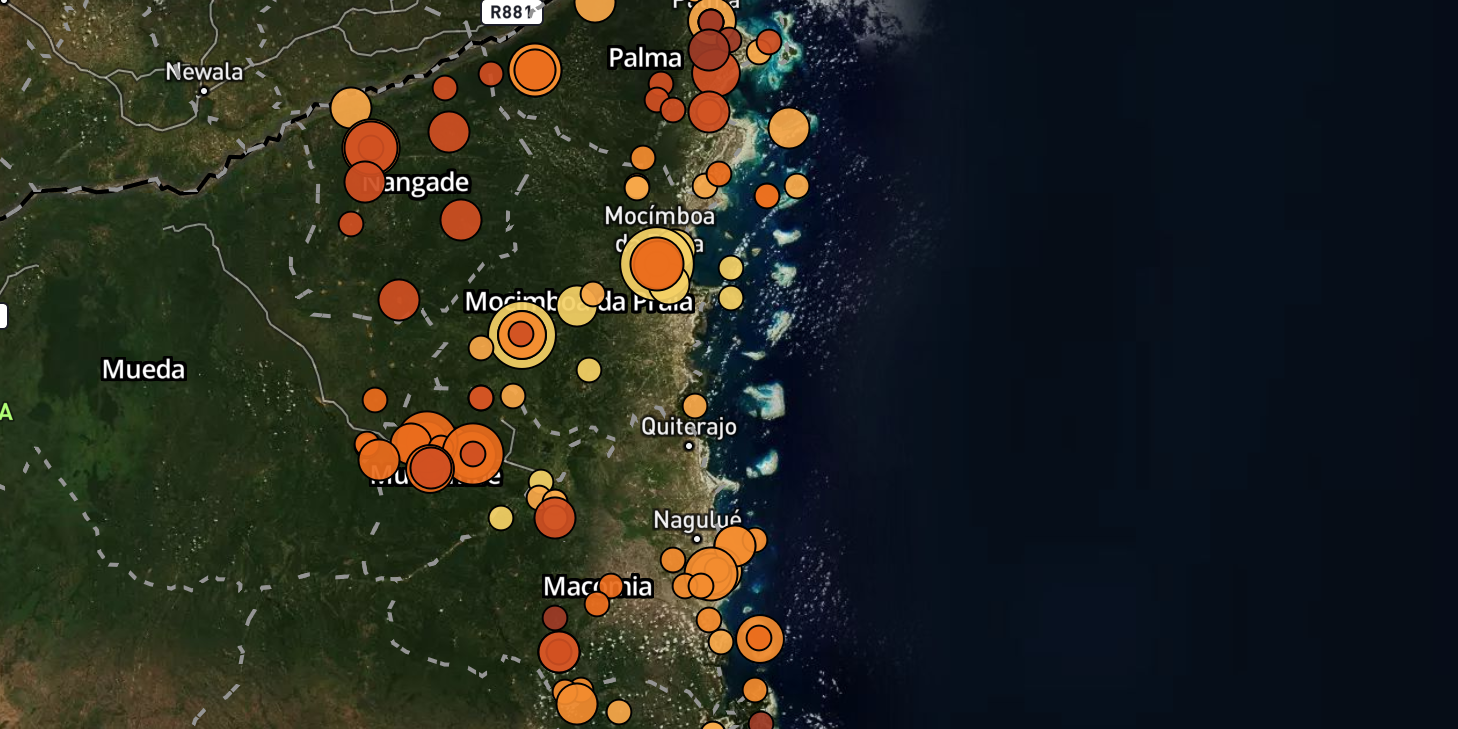 The week covered by this report began with Mozambican security forces killing a civilian from Muagamula, Macomia district on 4 January. The man was reportedly on the road at night when he ran into a government patrol. Apparently unable to ascertain the man’s identity, members of the patrol shot him.

The next day, insurgents were back in action, attacking Ilha Quirimba, Ibo district. The attackers reportedly stole a fishing boat with a full catch. Cabo Ligado sources differed as to the casualty count in the attack, with a local seafood merchant reporting that insurgents killed four civilians, but another source claiming that no civilians were killed.

Insurgents remained active on the central coast of the conflict zone. On 7 January, a band of insurgents attacked the coastal village of Olumboa, Macomia district. There, they captured 13 civilians. Of those captured, two escaped and at least seven were beheaded by insurgents. Two of the remaining abductees were then pressed into service to guide nine insurgents to Ilha Matemo, Ibo district the same day. On Ilha Matemo, insurgents abducted a woman and three children, looted food and other supplies, and stole a motor boat. Helicopters interdicted the insurgents as they attempted to escape, killing four of them. The other five escaped, along with the people they kidnapped.

Many incidents took place during ACLED’s year-end data pause in late December and early January, which are summarized here:

There were also some reports without clear dates associated that came out during the year-end data pause. Pinnacle News reported that civilians around Chai, Macomia district found 12 bodies decapitated in the bush near the town. The discovery followed a 9 December insurgent raid that had been thought to not have resulted in any casualties. The pro-government website Noticias de Defesa carried a 25 December claim by Mozambican national police chief Bernardino Rafael that police operations based out of Macomia had killed 37 insurgents, recovered 21 firearms, and destroyed insurgent vehicles over an indeterminate period preceding his speech.

Mozambican president Filipe Nyusi made a change at the top of the security force hierarchy in the new year, unveiling Mozambican Army General Eugenio Mussa as the new commander of the Northern Operational Command Post — the Mueda base that is the government’s campaign headquarters at this point in the conflict. The base had previously been under police control, in the person of national police chief Bernadino Rafael. Mussa has since also been named as the Chief of Staff of the Mozambican military.

Mussa’s appointment is notable for two reasons. The first is that it is a major blow in favor of the military in its interservice rivalry with the police. Since the end of Mozambique’s civil war in 1992, when the military became a politically integrated force with Renamo and Frelimo officers sharing leadership positions, the police have been the government’s counterinsurgents of choice. Police took the lead in operations against Renamo in the 2013-2016 conflict, and in operations against the Renamo Military Junta since then. The military, by contrast, remained small and under-resourced in the post-civil war era, as the country faced few foreign threats and Frelimo leadership was reluctant to hand Renamo officers significant combat power. Yet, after three years of police leading the government’s counterinsurgency effort in Cabo Delgado with little to show for it, it seems that Nyusi has decided to, if not reverse the statuses of the two services, at least begin to redress some of the imbalances between the two. Mussa, for example, on 6 January became only the second high-level uniformed official after Rafael to speak to the media about the counterinsurgency effort in Cabo Delgado. Mussa also accompanied Nyusi on an 11 January trip to Tanzania for meetings with Tanzanian president John Magufuli.

The second reason Mussa’s appointment bears mention is that it marks a growing assertion of control by Nyusi over strategic decisions in Cabo Delgado. Before he was president, Nyusi headed the defense ministry, which oversees the military. In that position, he would have worked closely with Mussa, who was named army commander in 2012, as well as with Mussa’s subordinate at the time, then-Army Chief of Staff General Bertolino Jeremias Capitine. Nyusi has reunited the two, promoting Capitine to make him Deputy Chief of Staff of the military. Since 2012, Nyusi has kept Mussa close, first appointing him head of Mozambique’s Civic Service shortly after taking office as president, and then giving him a crucial role as the government’s representative to the military affairs commission of the disarmament, demobilization, and reintegration (DDR) process with Renamo. Before the Cabo Delgado conflict broke out, the Renamo-Frelimo peace deal for which the DDR process was the lynchpin seemed to be Nyusi’s major legacy in peace and security. A move to turn operational control of the conflict over to a trusted lieutenant suggests that Nyusi will play a more active role going forward in developing counterinsurgency strategy.

The holiday season brought no relief for displaced civilians in Cabo Delgado. The humanitarian situation there continues to worsen, and the gap between what is needed to provide for those in need and the resources on hand continues to grow. In Macomia district, where no health centers remain operational, local sources report that 10 people died from a cholera outbreak in the village of Liukwe in December. The district administrator acknowledged the outbreak, but claimed only six had died. The disease has also appeared in Montepuez, where one person died and 11 were infected in the last week of December and the first week of January. In Metuge district, the rainy season has caused flooding and muddy conditions in displaced person camps. No reports of sickness as a result of the conditions have yet emerged, but images of civilians in the camps immiserated by predictable weather patterns underline how much effort is still required to give displaced populations sustainable lives outside the conflict zone.

That cause will become markedly more difficult in the coming months if further funding is not delivered to the international organizations that have played the largest role in humanitarian support so far. The World Food Programme announced on 6 January that it faces a $108 million funding shortfall for 2021, having secured only $24.4 million by the end of 2020. WFP provides food for over 400,000 people affected by the conflict in Cabo Delgado, covering up to 81% of their daily caloric needs. As a result of the funding shortfall, WFP warned, food distribution could be severely curtailed as early as the end of March. If the needed funds from international donors materialize, however, WFP is on track to expand their programming to reach 750,000 conflict-affected people per month.

Demands to participate in government-backed militias opposing the insurgency continued in the holiday season. On 25 December, residents of Macomia asked Rafael to issue them weapons and allow them to join a local militia. Rafael demurred, saying that he would leave it up to the local police commander to decide who would be allowed into militia ranks. The episode is yet more evidence of the tight relationship between militias and the police, particularly in Macomia, Muidumbe, and Mueda districts. In areas where police are the main government force on hand, they are the main organizers and utilizers of local militias.

The ongoing conflict and grim humanitarian situation was one of the reasons cited by Carta de Moçambique editor and prominent Mozambican civil society member Marcelo Mosse in a 4 January editorial calling for an indefinite pause on liquified natural gas developments in Cabo Delgado. Mosse wrote that the “exploitation of gas under current conditions does not serve Mozambicans,” pointing to the conflict, COVID-19 outbreaks associated with the projects, and the economic and environmental degradation Cabo Delgado has suffered. Mosse’s position is not widely held, and many still see the economic potential in pushing ahead with the LNG projects. Yet, to have someone of Mosse’s stature publicly arguing for keeping the gas in the ground — an unthinkable position in the Mozambican political mainstream a few years ago — is a measure of how the situation in Cabo Delgado has changed political calculations in Mozambique as a whole.

Mozambican Defense Minister Jaime Neto also made a bold statement recently, claiming to reporters on 6 January that the port facility at Mocimboa da Praia is “not still in enemy hands.” Neto did not go so far as to say that the government now controls the port — it does not — but said that the Mozambican navy has improved its capacity to surveil the port. Increased surveillance capacity, however, is a far cry from Rafael’s rumored pledge to retake Mocimboa da Praia by Christmas.

The government’s lack of progress in retaking Mocimboa da Praia, as well as fighting in Quitunda and possibly Quitupo, doubtlessly contributed to Total’s decision to suspend work on its LNG project and evacuate its workers from the project site in early January. The day after the engagement at Quitunda, which sits less than a kilometer from the company’s fenced-off construction area on the Afungi peninsula, Total sent five flights full of employees away from the project site. The move is a vote of no confidence in a security agreement Total made with the government in August, in which it agreed to provide funding and logistical support for a Joint Task Force of Mozambican government troops who would be charged with protecting the project. Suspending work gives Total huge leverage over the Mozambican government to renegotiate the agreement, since, as hopes for a prompt Final Investment Decision from ExxonMobil have faded, Total has become the government’s best short-term hope of realizing the promised major economic gains from the discovery of natural gas in Cabo Delgado. How Total will use that leverage is not yet clear, but the company will be a major player in deciding the shape of the government’s security policy going forward.

On the international front, both Portuguese and US officials made gestures toward increased military cooperation with Mozambique. Portuguese Defense Minister João Cravinho told reporters that while no definite plans have been made, he expects that Portuguese forces will significantly increase the amount of training they provide their Mozambican counterparts by the end of June 2021. Talks are ongoing between Cravinho’s ministry and the Mozambican defense ministry to work out the details.

On 8 January, high-ranking Pentagon official Anthony Tata traveled to Maputo, where he met with Neto and Mozambican interior minister Amade Miquidade. Tata’s trip follows a visit from US Counterterrorism Coordinator Nathan Sales in December. According to the meeting readout, Tata “discussed potential Defense Department training for the Mozambique military to improve its capability to defeat ISIS and bring stability to the region” and urged the Mozambican government to develop a wish list of equipment the US might be able to provide. Tata has since resigned his Pentagon post ahead of the incoming Biden administration naming a replacement, but his visit establishes a precedent for high-level Defense Department attention to Mozambique that the Biden administration may be loath to overturn.

On 4 January 2021, Mozambican Defense and Security Forces shot and killed a civilian close to Muagamula (Macomia, Cabo Delgado). The civilian was walking during the night holding a lantern.

On 7 January 2021, insurgents attacked civilians in Quirimba (Ibo, Cabo Delgado). The insurgents seized food supplies and a fishing boat. According to some reports, four people were killed, though others report no fatalities. 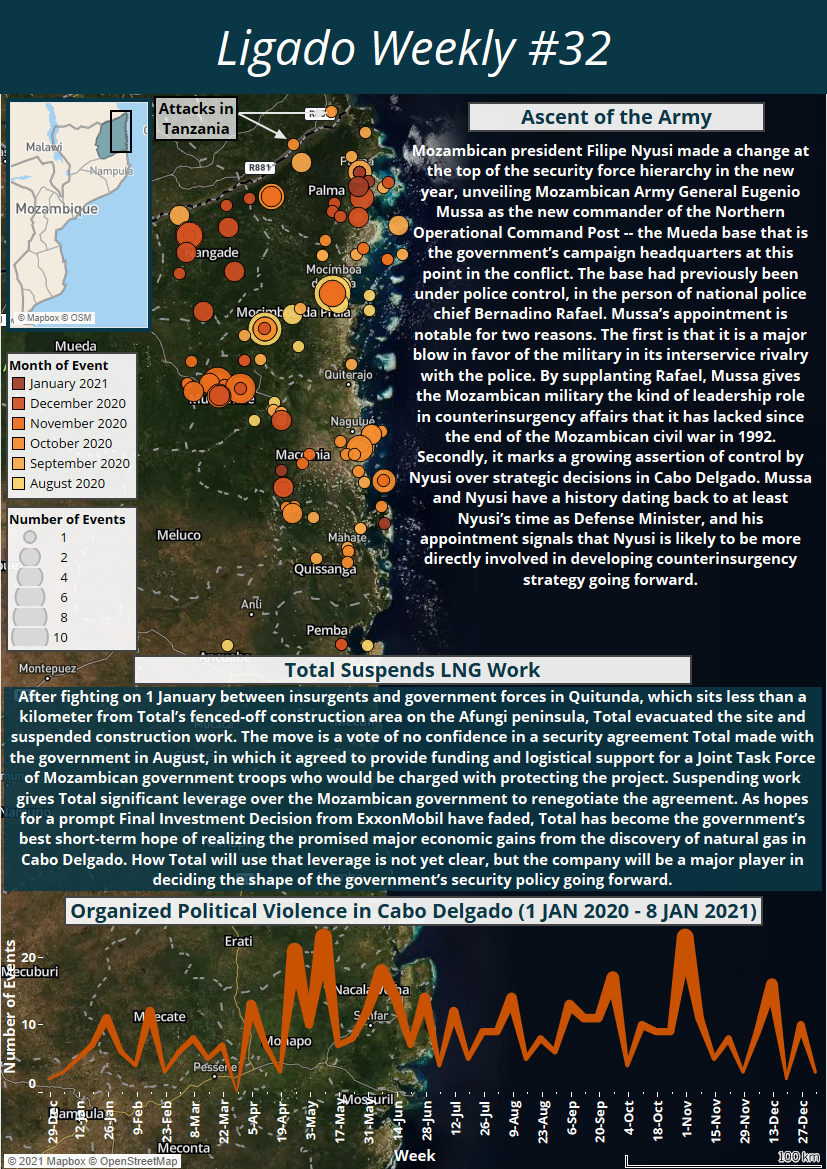