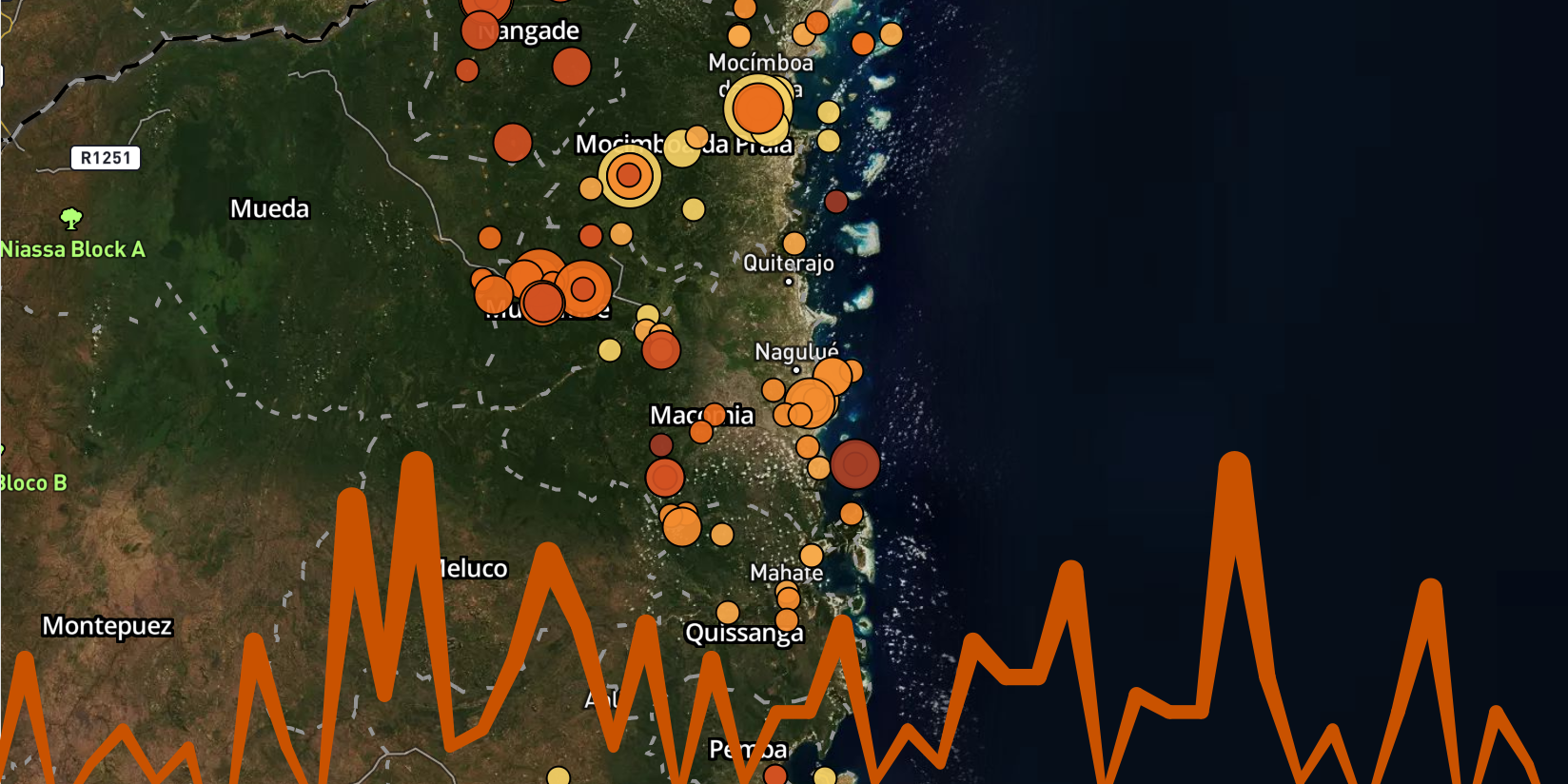 There were few reported insurgent operations in Cabo Delgado last week. Instead, government forces made most of the headlines, both for recovering kidnapped civilians in Macomia district and for ongoing abuses against civilians in Muidumbe district.

On 13 January, Mozambican police chief Bernardino Rafael presented to reporters 15 women and six children who government forces had rescued after they were kidnapped during the 7 January insurgent attack on Ilha Matemo, Ibo district. After leaving Ilha Matemo, the group stopped at Olumboa, Macomia district. According to Rafael, helicopters working with government forces tracked the group to Olumboa and then assaulted the insurgents, separating the 21 hostages from their captors. Casualties among insurgents or hostages are unknown. Speaking to reporters, one of the women recounted that they had been taken by a group of roughly 30 insurgents, who told them that they would be sent to Mocimboa da Praia to study in a madrassa. This account is similar to other reports from people who have lived under insurgent control. Many such reports have described efforts to indoctrinate civilians into insurgent religious and political ideas in areas of strong insurgent control.

Even in a light week for insurgent operations, the road between Nangade and Palma remained an insurgent target. On 15 January, two civilians driving a truck toward Palma abandoned their vehicle after seeing a suspicious motorbike on the road. The drivers were safe, but insurgents looted their truck. The two then returned to Nangade with the truck, telling other truck drivers what had happened.

The next day, despite the truckers’ experience, a soccer team from Mueda traveled the same road in order to play an away match in Palma. Near Pundanhar, the six vehicles carrying the team were waylaid by insurgents. The attackers killed five people and destroyed three of the cars.

Also on 16 January, authorities arrested two men arriving in Mueda with weapons in their car. The car had traveled from Nampula that day.

Government forces also ran offensive operations on 16 January. In Ntuleni, Palma district, government or Dyck Advisory Group helicopters killed an unknown number of insurgents despite the insurgents using civilians in the town as human shields. Civilian casualties from the incident are also unknown.

On the same day, government forces killed an unknown number of insurgents who were hiding out in a mosque in Olumbe, Palma district.

In addition to recovering the hostages from Ilha Matemo, Mozambican police claimed to have arrested a young man on Ilha Matemo who was involved in  the attack there. The 19-year-old man was born in Memba, in Nampula province, and is a resident of Quinga, also in Nampula, according to the police.

Three teens and five younger children who escaped an insurgent camp and found their way to Nangade told sources that insurgent food supplies are running low in the area, and that abducted civilians are not being fed as a result. Their captors, the children said, relied on raids to steal food products in order to eat. Sources reported that the children looked thin when they arrived in Nangade.

In a speech in Pemba on 12 January, Mozambican President Filipe Nyusi made an informal offer of amnesty to young Mozambicans who are willing to abandon the insurgency. Nyusi portrayed Mozambicans involved in the insurgency as victims who had been “manipulated and used,” presumably by foreigners. If they could find a way to contact the security services, Nyusi promised they would be given a peaceful way to re-enter Mozambican society.

Nyusi’s speech offers an intriguing path forward for the government’s counterinsurgency strategy, but there are some major credibility concerns that will have to be overcome before the amnesty offer is likely to have the intended effect of sapping significant manpower from the insurgency. Insurgents are likely to remember that this is not the first time the Mozambican government has promised them amnesty. Back in December 2017, at the start of the conflict, police chief Rafael announced that insurgents who turned themselves over to authorities would be given amnesty. No one appears to have taken him up on the offer. Since then, however, credible reports show that suspected insurgents who have ended up in government custody have been subject to abuses up to and including extrajudicial execution. Video evidence of such abuses came to light last year.

Nyusi tried in his speech to overcome the credibility gap by pointing to the police’s recent claim to have peacefully arrested a young Mozambican who was involved in the 7 January attack on Ilha Matemo. If the government can find ways to actually allow that young man and others like him to re-enter Mozambican society, that could begin to make the amnesty offer more credible.

Recent research on amnesty offers during internal conflicts suggests that another way to help bridge the credibility gap is to make the amnesty program a formal law. By formalizing these programs, governments demonstrate their commitment to amnesty by making it more difficult to renege on their offer. The research also suggests that, while amnesty programs do little on their own to hasten the end of conflicts, they do assist in bringing about negotiated settlements — an outcome that, given the government’s inability thus far to make much military progress against the insurgency, seems likely in the long run in Cabo Delgado.

Relations between government security forces and civilians are still poor in many areas around the conflict zone in Cabo Delgado. Refugees from Muidumbe district who have fled to Mueda report that government forces stationed in Matambalale, Muidumbe district regularly use their position to steal from local civilians. The refugees complained of extortion, confiscation of property, and demands of payment at checkpoints, among other abuses. They also reported that there had been clashes between government troops and local militias, although the dates of those clashes are unclear. Two militia members, and over two security force members died in those clashes, according to the refugees.

Refugees who have made it as far as Nampula do not have to deal with security force repression, but they are facing dangerous levels of food insecurity. Refugees at the Corrane camp say that there has not been enough rain for their crops to grow and that no food aid has appeared to fill in the gaps in their diets. With the World Food Programme saying that they are quickly running out of funds to provide food aid, the cracks in the system of humanitarian support in northern Mozambique are growing wider.

On the international front, President Nyusi visited his counterpart in Tanzania on 11 January, confirming in a speech afterward that they had discussed security issues. He declined to elaborate or to say if they had agreed to any further cooperation. Nyusi appointed Ricardo Mtumbuida as Mozambique’s high commissioner to Tanzania on 11 January, which could indicate closer security cooperation, as social media reports suggest that Mtumbuida is a high-ranking member of Mozambique’s secret service.

French Armed Forces Minister Florence Parly spoke about Cabo Delgado at a parliamentary hearing on 12 January. She called the situation in Mozambique “very worrying” and said that the Macron administration is looking at how it can support the Mozambican military through training. She said that France would prefer to act through its European partners — no doubt a reference to the ongoing preliminary discussions between Mozambique and the European Union about a security and humanitarian support package. She likewise highlighted French forces in the Indian ocean that could quickly conduct training or other operations in Mozambique.

An extraordinary summit of the Southern African Development Community (SADC), which had been scheduled for 17 January to discuss regional security issues including the situation in Cabo Delgado, was postponed indefinitely last week. The summit was scheduled to take place in Maputo, and the stated reason for the delay was an increase in COVID-19 infections in Mozambique. Given that other SADC and Mozambican government business is ongoing despite the virus, it seems that the real reason for the delay may be Mozambique’s continued unwillingness to engage with SADC on possibilities for intervention in Cabo Delgado. 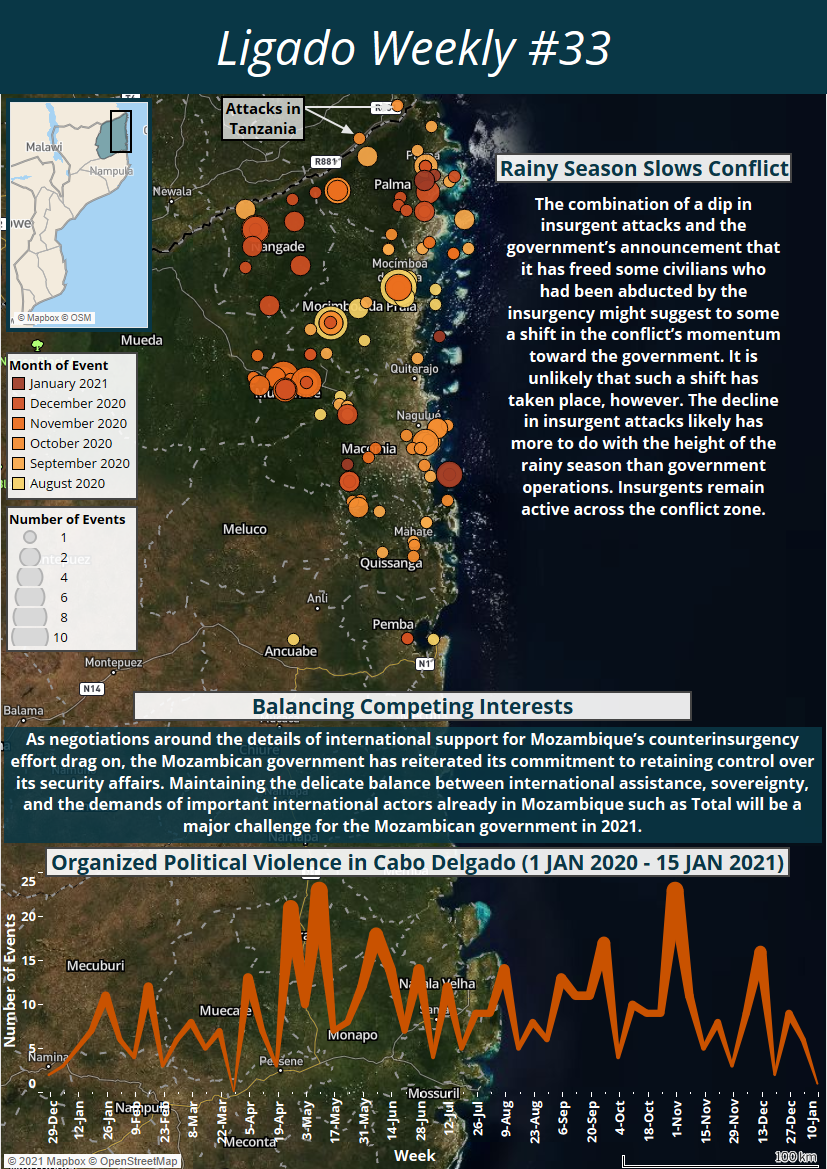