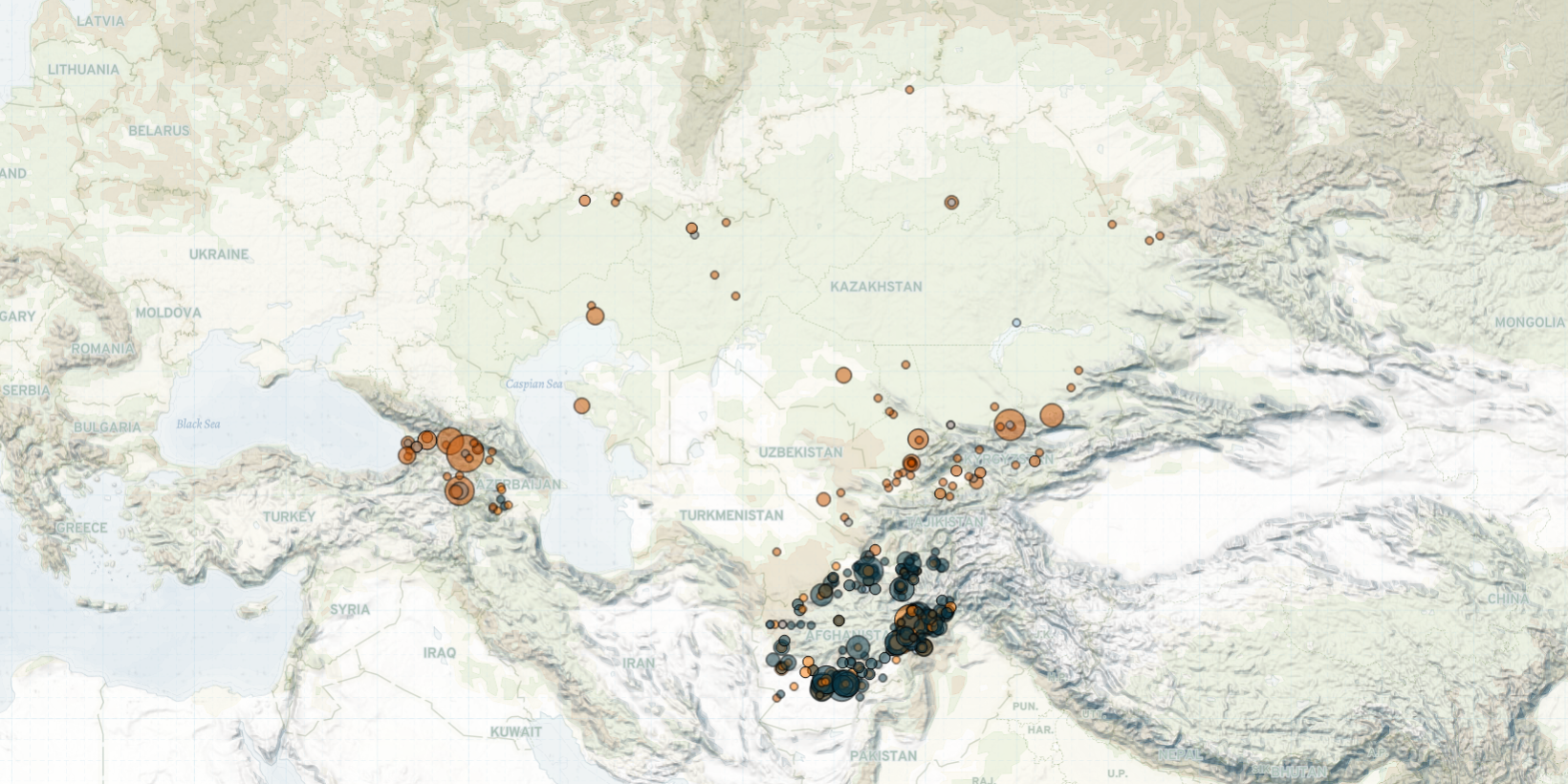 Last week in Central Asia and the Caucasus, the Taliban used drones to attack Afghan forces in Afghanistan, while Afghan forces made territorial gains in Urozgan province. The Islamic State (IS) targeted both civilians and the Taliban, while an airstrike by Afghan forces killed civilians and triggered a rare protest in Nimruz province. Along the Azerbaijan-Artsakh Line of Contact, an unclaimed shooting wounded a soldier from the de facto Artsakh Republic. Landmines remaining from last year’s war in the Artsakh (Nagorno-Karabakh) region also led to casualties. Meanwhile, opposition protests in Armenia calling for the resignation of Prime Minister Nikol Pashinyan continued, though at a lower rate. In Georgia, a brawl between local Muslim and Christian groups highlights tensions between religious minorities. In Kazakhstan, the opposition continues to protest the recent legislative elections, and in Uzbekistan, shortages in natural gas supplies sparked protests in several regions.

In Afghanistan,1 ACLED is currently conducting a review of sourcing and reporting of the conflict in Afghanistan since mid-2020. Afghan forces and the Taliban clashed in a number of provinces last week, most intensively in Faryab, Kandahar, Helmand, and Nangarhar. Additionally, in Urozgan province, Afghan forces regained control over the Gizab district, following days of fighting with the Taliban. Meanwhile, the Taliban used drones to drop bombs onto Afghan military headquarters in Kunduz city; no casualties were reported. The Taliban has used drones since at least 2016, but quite rarely to conduct attacks, and usually for surveillance use (The Diplomat, 22 December 2020). However, possession of such warfare equipment suggests that the group has increased its fighting capacity, despite ongoing peace talks (TRT World 1 January 2021).

Meanwhile, IS killed an appellate court employee in Jalalabad city in Nangarhar province and claimed an attack against the Taliban in Kunar province. Before losing territory to Taliban and Afghan forces, IS had been active in both provinces. Afghan special forces and the National Directory of Security had targeted the IS in Nangarhar shortly before these attacks, killing a total of three militants.

Lastly, at least 18 civilians were killed by an Afghan military airstrike in the Khash Rod district of Nimruz province. As in such recent incidents, the military claimed the airstrike killed Taliban militants while denying any civilian fatalities. This led locals to carry their relatives’ bodies to the provincial capital to protest the airstrike. A day after the airstrike, President Ashraf Ghani offered his condolences (Reuters, 11 January 2021).

Tensions between the military forces of Artsakh, Armenia, and Azerbaijan persisted last week. The de facto Artsakh Republic’s Ministry of Defence (MoD) reported a soldier had been wounded after shooting from the Azerbaijani side over the central part of the Artsakh-Azerbaijan Line of Contact. Azerbaijani military forces deny their involvement. At the same time, parts of the Artsakh (Nagorno-Karabakh) region are still covered by the landmines planted by Azerbaijani and Artsakh forces during the latest war. Following the end of clashes on 9 November 2020, Armenian, Azerbaijani, Russian, and Turkish deminers actively conducted demining activities in the region (ArtsakhPress, 11 January 2021; Azernews, 11 January 2021). However, since then, at least nine landmine explosions have claimed military and civilian lives, with two explosions taking place last week.

In Armenia, opposition protests calling for the resignation of Prime Minister Nikol Pashinyan decreased. Last week, a group of anti-government protesters tried to block Pashinyan’s vehicle in Yerevan as he travelled to a meeting with the Azerbaijani and Russian presidents in Moscow.

In Georgia, a religious dispute turned into clashes between local Muslim and Christian groups in Buknari village in Chokhatauri region. After the Muslim community members bought a house as a place of worship, local Christians complained, triggering a brawl between the two communities. Two people were injured. The next day, local Muslims organized a demonstration demanding their right to pray, as local Christian groups continued to demonstrate against the construction of a mosque. The local government and religious leaders later reconciled the two groups (Agenda.ge, 15 January 2021). Such incidents are rare but sporadically happen in Georgia, where the majority of the population is predominantly Orthodox Christian, with several large Muslim communities (OC Media, 14 January 2021).

In Kazakhstan, following legislative elections on 10 January 2021, the opposition organized protests against the Nur-Otan Party’s long-lasting rule. The Democratic Party and Oyan Kazakhstan led the protests across a number of cities. As in previous weeks, police dispersed all of the protests, detaining many. This comes despite promises by President Kassym Tokayev to ease restrictions on public gatherings (RFE/RL, 12 January 2021).

Lastly, in Uzbekistan, shortages in natural gas supplies sparked protests in Pakhtakor city in Jizzakh region and Altiarik township in Fergana region. In Namangan city, drivers also protested against a limited supply of liquefied petroleum gas at local gas stations. During December 2020, similar protests also took place in Bukhara, Andizhan, and Tashkent regions. The fuel shortages are connected with the extreme cold the country has experienced this winter, although critics blame the government for the lack of adequate preparation, despite early warnings by experts (Eurasianet, 11 December 2021).