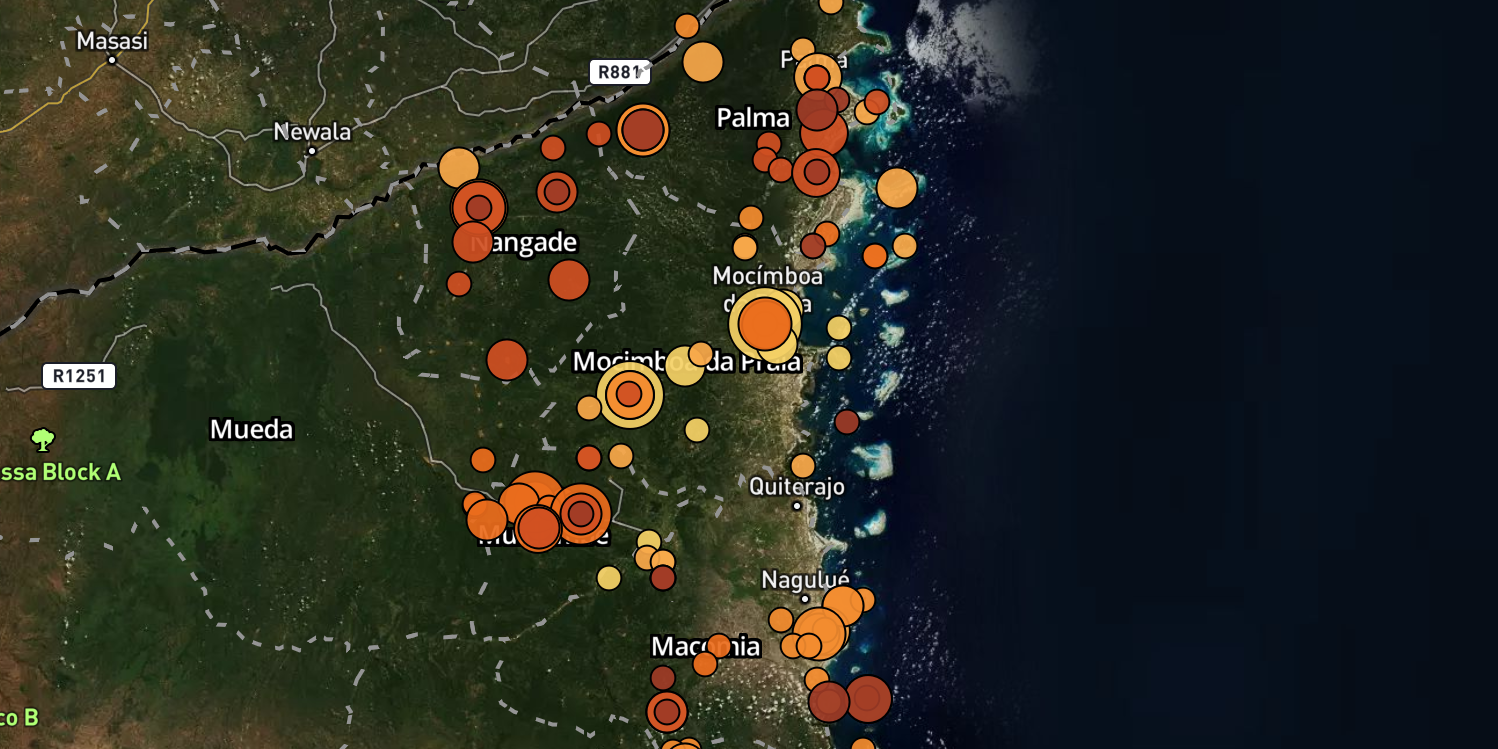 Insurgents continued to menace the R763 road connecting Palma and Mueda last week. Despite two attacks the week before, traffic on the road continued in an attempt to keep supplies flowing to Palma. On 19 January, insurgents attacked a vehicle transporting cans of gasoline to Palma as it made its way through Pundanhar, Palma district. Some passengers managed to flee. Insurgents killed three civilians and burned the car.

Two days later, a small group of insurgents raided the village of Namiune, Nangade district, about 10 kilometers south of the R763 and 25 kilometers southwest of Pundanhar. They beat and then beheaded a village leader and kidnapped four boys aged between 10 and 12.

On 22 January, insurgents arrived by motorcycle at the border guard post near the village of Mandimba, Nangade district, which sits on the R763. The border police ran away without a fight when the insurgents arrived. No one was hurt, but insurgents looted the tents the guards were staying in, taking food and personal effects.

Insurgents also conducted operations away from the Palma to Mueda road, including a 24 January attack in the coastal village of Olumbe, Palma district on members of the government Joint Task Force charged with protecting the liquified natural gas (LNG) projects on the Afungi peninsula. No casualty reports are available, but fighting was reportedly intense and resulted in government troops retreating to Palma. The clash is the second engagement between insurgents and government forces reported at Olumbe in just over a week.

While the date is unclear, at some point during last week insurgents also conducted an operation in northern Macomia district. Insurgents built a wooden roadblock in the village of Nova Zambézia, cutting off northern Macomia from government forces stationed in Macomia town. Afterwards, shots were reported in the village market in Chai, which is in Macomia district north of Nova Zambézia. It is unclear at this point who fired the shots and whether there were any casualties or property destruction as a result.

A report also emerged this week of an earlier attack in Macomia district on or around 7 January on the Macomia coast between Ingoane and Pangane. According to the report, insurgents involved in a 7 January attack on Ilha Matemo also attacked fishermen on the Macomia coast. There are no casualty reports from the attack, but several fishermen who were working in the area are now missing.

When then-US State Department Counterterrorism Coordinator Nathan Sales visited Maputo in early December, one of the areas in which he hoped to improve US-Mozambique cooperation was border security. “The United States,” he told reporters, “wants to be Mozambique’s security partner of choice in strengthening border security,” going on to tout the technical capabilities the US could offer to the Mozambican government to monitor who enters the country. No deal on US support for Mozambican border security has yet been announced, but reports last week suggest that the Mozambican government is undertaking new efforts to prevent undocumented immigration through Cabo Delgado.

On 12 January, Mozambique’s National Migration Service (SENAMI) intercepted 28 undocumented immigrants attempting to enter Mozambique at the Pemba airport. Those detained included 12 Bengalis and 16 Somalis, some of whom were sent back to their home countries on 19 January. A SENAMI spokesman said that roughly 80 immigrants arriving without papers have been detained at the Pemba airport this month alone. A source said that the flight the immigrants were on, which originates in Nairobi and stops in Dar Es Salaam and Pemba before concluding in Maputo, has become a common route for illegal entry into Mozambique. Immigration paperwork for the flight is handled at Pemba where, in the past, it has been relatively easy to bypass security checks.

In a press conference, SENAMI’s Cabo Delgado office declared that interdicting this smuggling route is now a priority. A spokesman noted that the scheme likely requires assistance from employees of Mozambique’s national airline, which operates the flight, and of officials in SENAMI itself. There are no indications that any of those arrested this month are thought to be associated with the insurgency, but, given Mozambican President Filipe Nyusi’s repeated calls to improve border security in response to the insurgency, it is hard to see the crackdown as unconnected from the conflict. Improved security at Pemba airport, however, does little to improve the security of Cabo Delgado’s essentially unguardable land border with Tanzania. As demonstrated this week, even border guards at one of the nine formal crossings between the two countries are prone to fleeing at the first sign of insurgent activity. Improved border controls may improve overall state capacity in Cabo Delgado, but it is unlikely to allow the government to separate the province from the rest of East Africa.

Administrators of districts that have taken on large numbers of civilians displaced by the conflict are calling for added government assistance to allow refugees to access healthcare. Metuge administrator António Valério told Mozambican Health Minister Armindo Tiago that many refugees in his district are living as far as 25 kilometers from the nearest health center, with no capacity to get there quickly. Ancuabe administrator Lúcia Namashulua asked for funding for more community health workers, noting that the workers currently serving her district are not government employees and do not work full time. Tiago responded by promising to fund temporary health centers within refugee resettlement areas.

The need for healthcare, among other services, in the resettlement areas is dire, as demonstrated by the spike in diarrhea cases in Metuge district this year. Metuge reported 270 cases in the first week of 2021, more than triple the 80 cases that were reported in the same period last year. The district medical officer ascribed the increase in cases to overcrowding in resettlement areas and lack of sanitation facilities.

Further north, in Palma, the district government has ordered that all civil servants who have fled the district return to work by 2 February. Response to the order is likely to be tepid, given that the only open land route to Palma town is the R763, which continues to be the target of repeated insurgent attacks. A similar order for Muidumbe district, issued in late October 2020, coincided with a brutal insurgent assault on Muidumbe in which government employees were among those targeted.

On the international front, South African foreign minister Naledi Pandor expressed her concern about the long delay in Mozambique outlining a request to the Southern African Development Community (SADC) for support in Cabo Delgado. Pandor’s comments were pointed by diplomatic standards, saying that the lack of a support request is a “worrying puzzle” and that her government has “made every effort to reach out to the government of Mozambique and to sit with them to decide a support agenda.” She added that her government would attempt to supplement funding for humanitarian efforts in Cabo Delgado through the African Renaissance Fund. The Mozambican government has long dragged its feet on producing a detailed security support proposal, apparently preferring to pursue bilateral support options. The latest delay came in the form of a postponement of a SADC summit in Maputo scheduled for last week, due ostensibly to COVID-19 concerns.

Less frustrated was a European Union (EU) delegation led by Portuguese foreign minister Augusto Santos Silva, which met with Nyusi in Maputo on 20 January, apparently unbothered by the threat of COVID-19. The delegation discussed specifics of promised EU support for Mozambique in Cabo Delgado. In contrast to Mozambique’s dealings with SADC, Santos Silva told reporters that in his delegation’s meeting with Nyusi had been “very clear in identifying the areas in which increased cooperation in the area of ​​security can immediately benefit Mozambique.” The Mozambican government called the meeting a “success” and said the EU had declared its availability to assist Mozambique in “the areas of logistics, health and military training, as well as in other areas that the Government considers important.” No further details of what was discussed have been released, but prospects for EU assistance in Cabo Delgado are clearly brighter than prospects for assistance from SADC.

Nyusi also met last week with Total CEO Patrick Pouyanné in Maputo, a summit also strangely unaffected by the COVID-19 pandemic. The discussion focused on the security situation around Total’s LNG project in Palma district, which remains locked down following an insurgent attack adjacent to the project in early January. The two reportedly signed a new memorandum of understanding covering security considerations for the project, which will help the Mozambican government’s push to get Total back to work. Details of the new agreement are unavailable, but it replaces a previous agreement from August 2020 that established terms for Total’s support of the government Joint Task Force in charge of protecting LNG infrastructure. Total remains adamant that it does not work with armed private security, which means that the Joint Task Force model likely remains in force under the new agreement.

Canal de Moçambique confirmed previous reporting that the new Mozambican high commissioner to Tanzania, Ricardo Mtumbuida, was previously the director of operations for Mozambique’s intelligence service. The paper suggested that he will have the task of convincing Tanzania to offer more concrete security and intelligence support for Mozambique’s counterinsurgency effort. The report also claimed that the Tanzanian government sees the Cabo Delgado conflict as a matter internal to Mozambique that is more about clearing land near the province’s LNG projects than any larger political issue. If that characterization is correct, Mtumbuida will have a long way to go to get the administration of Tanzanian president John Magufuli to embrace Nyusi’s vision of the insurgency as fundamentally an external threat.

On 21 January 2021, insurgents attacked civilians in Namiune (Nangade, Cabo Delgado). One person, the leader of the village, was beheaded and four children were abducted. 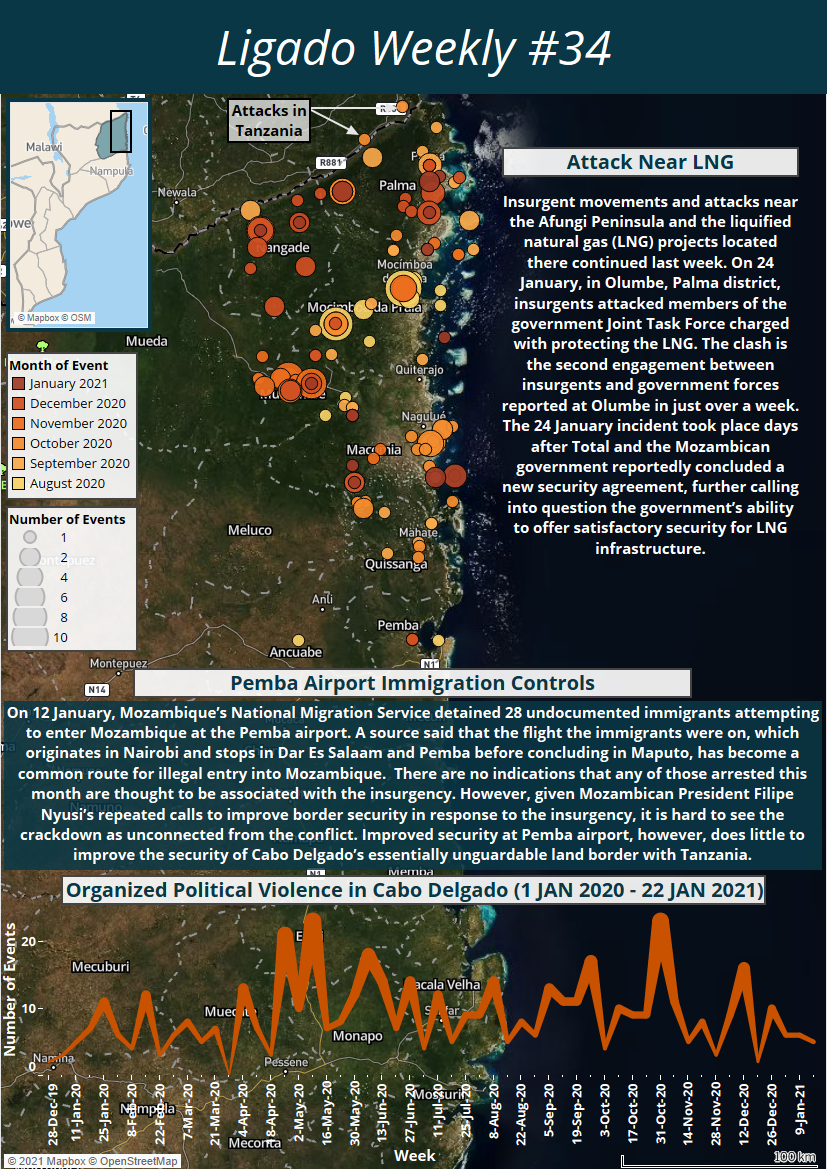