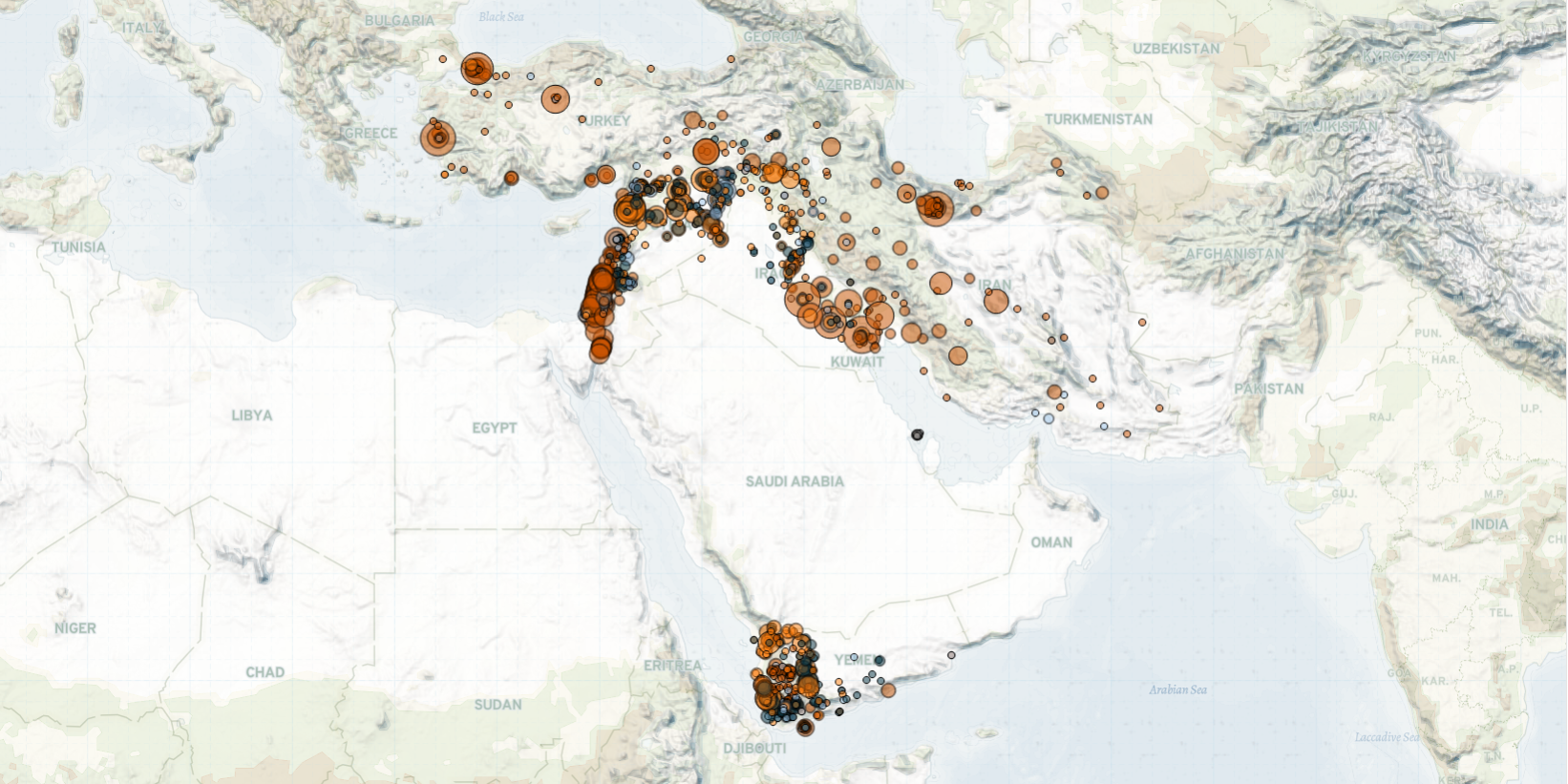 Last week in the Middle East, a deadly sucide bombing was carried out by Islamic State (IS) militants in the Iraqi capital Baghdad. In Syria, fighting between different warring factions continued, while unidentified gunmen attacked regime forces, killing at least two soldiers in Quneitra. In Yemen, intense fighting between pro-Hadi and pro-Houthi forces continued in Hodeidah and Marib governorates. Meanwhile, military forces in Saudi Arabia intercepted a missile or drone targeting Riyadh, reportedly fired either by a new militant group from Iraq or by the Houthis. Finally, police clashed with ultra-Orthodox Jewish citizens in Israel after riots broke out over coronavirus lockdown measures.

In Iraq, two IS suicide bombers detonated their vests at a market in Tayaran Square in Baghdad city, killing over 34 people and wounding at least 100. The first suicide operative claimed to be sick and gathered a crowd before detonating, while the second operative detonated during casualty evacuation (BBC News, 22 January 2021). The event is the biggest suicide attack in Baghdad in three years. Iraqi Security Forces advised people to avoid large crowds, and a decrease in protests was observed in Iraq following the deadly attack. Elsewhere, two mass graves were discovered in the eastern part of Mosul city containing the remains of those killed by IS during the group’s reign over the city. One grave contained 14 remains, the other at least 100 (Basnews, 17 January 2021). Meanwhile, attacks by coalition convoys continued last week in Iraq and were reported in Diyala. Attacks targeting power transmission towers were also reported.

In northwest Syria, Russian warplanes carried out airstrikes on the frontlines in Lattakia, impacting areas in Kabani and Sirmaniyah. This coincided with clashes between regime forces against opposition and Islamist factions along several frontlines in the greaterer Idleb area. Meanwhile, Turkish forces set up at least two additional outposts in the enclave, one near Idleb’s Saraqab and the other in the northern Hama countryside. Separately, a suspected Turkish drone launched an airstrike on Ain Al Arab district in Aleppo, wounding a civilian. In eastern Syria, tensions between the regime and the Kurdish Autonomous Administration continued last week. Asayish forces prevented supplies from entering regime-controlled parts of Al Hasakeh city and Tal Tamer in response to the regime blockade on Kurdish-held areas in northern Aleppo, which prevented the entry of food and fuel supplies. In Quneitra, three attacks by unidentified gunmen against regime forces were reported in the countryside with the use of small arms fire and IEDs. One of the attacks targeted the pro-Hezbollah Golan Regiment, killing two members (Asharq Al Awsat, 18 January 2021). While these attacks are common in southern Syria since the region’s takeover by the regime in 2018, it is uncommon for them to occur in Quneitra province.

Between 16 January and 22 January, the Hodeidah and Marib governorates saw the most fighting. Hodeidah’s most active fronts were in Hays and Ad Durayhimi, with clashes between pro-Hadi and pro-Houthi forces on 17 January resulting in 40 fatalities (Al Amaliqah, 17 January 2021). In Marib, the two groups clashed on the Sirwah, Rahabah, and Jabal Murad fronts, and Houthi forces reportedly captured swaths of Jabal Murad district (Mujtahid News, 16 January 2021).

Elsewhere, in Saudi Arabia, Saudi military forces reportedly intercepted a missile or drone targeting Riyadh that was allegedly fired by a new militant group from Iraq (Twitter, 23 January 2021). Other sources say that Houthi forces are responsible for the attack, though the latter denies any involvement (Al Masdar, 23 January 2021; Aden al Ghad, 23 January 2021). While there were no reports of casualties associated with this attack, three civilians in Jazan were injured by Houthi shelling on 17 January (Khabar News Agency, 17 January 2021).

Lastly, in Israel, riots broke out in Bnei Brak after police raided a religious school that had opened in violation of coronavirus lockdown restrictions. Officers used flash grenades while residents blocked roads and burned trash bins and tires. Earlier in the day, a group of ultra-Orthodox citizens who had gathered against the closure of the school attacked two police officers on patrol, injuring one of them and damaging their vehicle. Since the start of the pandemic, dozens of violent clashes have occurred between police and ultra-Orthodox Israelis, who have been resisting the lockdown measures, continuing to open schools, praying in synagogues, and holding weddings and funerals. Despite constituting only 10% of the population, the community accounts for over one-third of Israel’s coronavirus cases (Euronews, 24 January 2020).