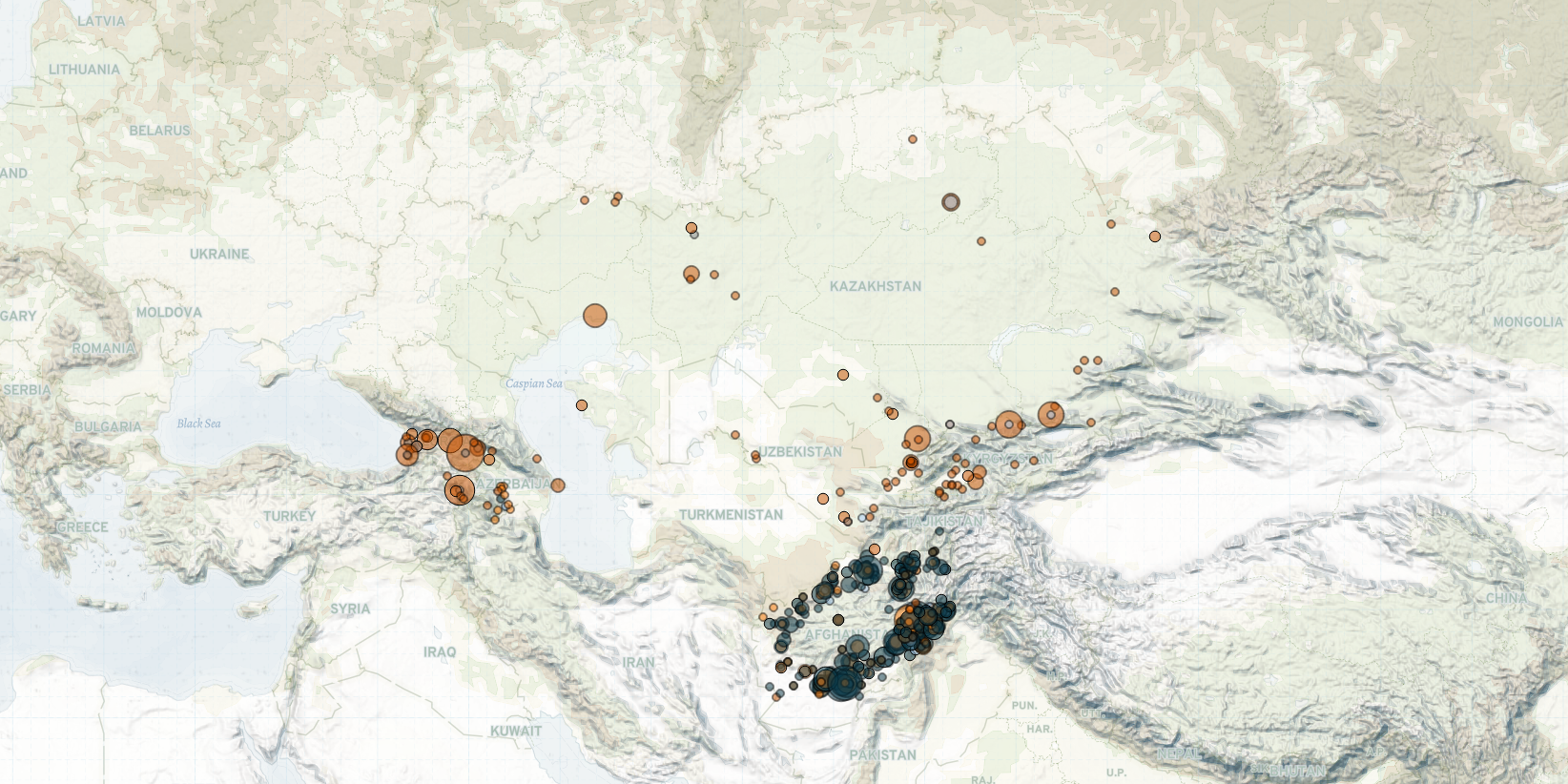 Last week in Central Asia and the Caucasus, key developments included the ongoing violence in Afghanistan between military forces and the Taliban, along with attacks targeting civilians by unidentified groups and the Islamic State (IS). In Nangarhar province, the leader of an Islamist group, Lashkar-e-Islam, was killed in an unclaimed bomb attack. Meanwhile, in the de facto Republic of Artsakh, landmines remaining from the latest war continue to cause casualties. In Armenia, a large demonstration was organized demanding the resignation of Prime Minister Nikol Pashinyan. In Azerbaijan, parents and relatives of soldiers killed in battle protested against the cemetery conditions in Baku. In Georgia and Kazakhstan, restrictions due to the coronavirus pandemic sparked a series of protests. Additionally, in northern Kazakhstan, oil workers demonstrated for the betterment of their working conditions, while in Turkmenistan, dozens were detained on suspicion of Islamist extremism.

In Afghanistan,1ACLED is currently conducting a review of sourcing and reporting of the conflict in Afghanistan since mid-2020. Afghan forces continued to target Taliban militants in many provinces last week, most notably in Kandahar where 60 militants were killed in a joint operation by Afghan Military and Special Forces. Government forces also regained control over a dozen villages in Muqur district of Badghis province. Still, the Taliban conducted a number of small-scale attacks targeting army, pro-government militia posts, and police forces in over 25 provinces. The group also claims to have captured a large area in the Argo district of Badakhshan province. In addition to armed clashes, remote bombs and shelling were widely used by the Taliban and unidentified groups. One unclaimed roadside bomb in Nazyan district of Nangarhar province killed the leader of Lashkar-e-Islam (LeI) militant group, who had a three-million dollar bounty on him by the US (AP, 29 January 2021). Founded as an Islamist insurgency in northwest Pakistan, LeI has been active in Afghanistan since 2015, and forged an alliance with another Islamist group, Tehreek-i-Taliban Pakistan, which is also an ally to the Taliban (The Diplomat, 30 January 2021). ACLED records over a dozen events since 2017 in which NATO and Afghan forces have targeted LeI, mainly in the Nazyan district of Nangarhar, neighboring Pakistan.

Meanwhile, attacks targeting civilians continued similarly to the weeks prior. Many explosions and targeted shooting took place last week, though the majority of them remained unclaimed. IS also targeted civilians in Kabul city using magnetic bombs.

In a separate development, amid high levels of violence and stalled intra-Afghan talks, US Pentagon Spokesman John Kirby declined to commit to a full withdrawal of US forces from Afghanistan by May 2021, as stipulated in the US-Taliban deal (CNN, 29 January 2021). Kirby cites the Taliban’s attacks against Afghan forces as one of the reasons. His statement follows Biden’s National Security Advisor Jake Sullivan’s decision to revise the deal (ACLED, 27 January 2021). Four senior NATO officials have also said that troops would remain after May (Reuters, 31 January 2021). In response to Kirby, the Taliban threatened to resume its attacks against US forces if they remain in Afghanistan past May (VOA, 29 January 2021).

Along the Armenia–Artsakh–Azerbaijan Line of Contact, remnant landmines led to casualties last week, as they have in prior weeks. Last week, two landmine blasts injured a tractor driver in Tartar region and a serviceman of the National Agency for Mine Action in Aghdam region. For more, see the section on cross-border violence in Nagorno-Karabakh despite the ceasefire in ACLED’s 10 conflicts to worry about in 2021 series.

In Armenia, over 2,000 demonstrators gathered in the Government House in Yerevan, calling for the prime minister’s resignation following his signing of the agreement ending the 2020 Artsakh (Nagorno-Karabakh) war. A group of demonstrators attempted to storm the Government House, but were stopped and detained by police. In contrast with previous opposition demonstrations, this incident was not linked to the Homeland Salvation Movement as the organizers of the demonstration — including filmmakers, artists, and cultural figures — deliberately avoided affiliation with political parties (Armenpress, 28 January 2021).

In Azerbaijan, parents and relatives of the soldiers killed in the 2020 Artsakh (Nagorno-Karabakh) war organized rare protests demanding soldiers be buried in another cemetery, as the current cemetery is flooded with groundwater. The protesters blocked several streets in Baku demanding to rebury the soldiers in Baku’s military cemetery.

In Georgia, measures to contain the coronavirus were prolonged last week until the end of February, sparking protests (JAM News, 23 January 2021). In Tbilisi and Kutaisi, gym, restaurant, and hospitality business owners organized protests calling for easing the restrictions due to the economic hardship caused by the pandemic. Members of the United National Movement, European Georgia, Lelo, Strategy Aghmashenebeli, and More Freedom-Girchi parties also joined the protests.

Similarly in Kazakhstan, hundreds gathered at the central square of Kokshetau city to protest the government’s policy to combat the coronavirus, calling for fewer restrictions on their economic and social activities. Meanwhile, in the Temir region, oil workers started a series of protests demanding a salary increase and improved working conditions.

In Turkmenistan, dozens were detained, reportedly due to having long beards, interpreted as a sign of religious extremism. The country’s current regime has been increasing its control over religious groups and organizations (Mediazone,1 February 2021). Arbitrary arrests based on accusations of extremism take place sporadically in Turkmenistan. The victims usually experience abusive behavior by police officers while in detention (Freedom House, 16 April 2020).