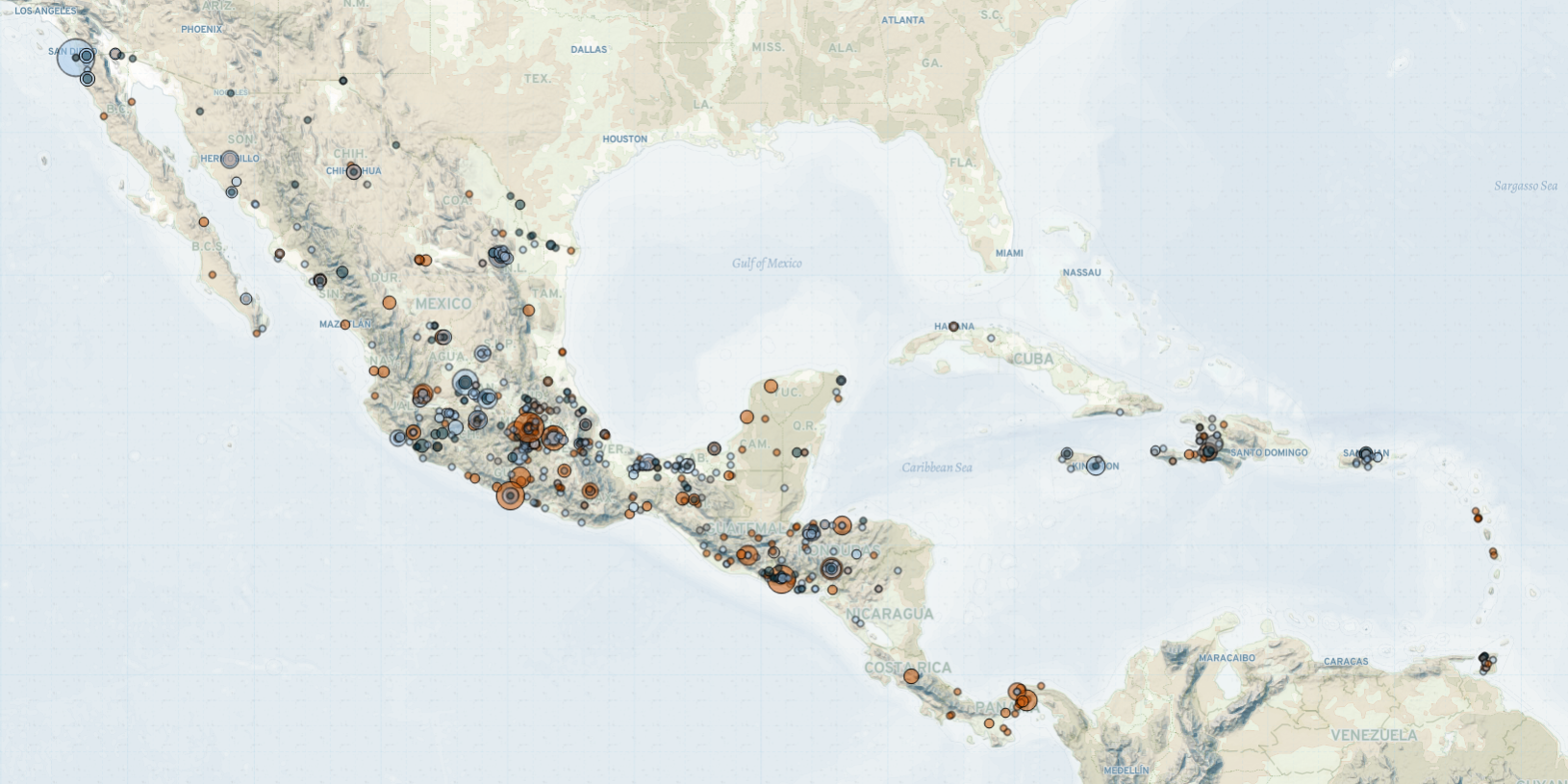 Last week in Mexico, Central America, and the Caribbean, demonstrations continued at high levels. In Haiti, demonstrations against President Jovenel Moise persisted a week ahead of the end of the president’s constitutional mandate. Meanwhile in Mexico, 19 Central American migrants were killed allegedly by the Cartel del Noroeste in the state of Tamaulipas. In Cuba, a group of artists attempted to stage a protest outside the Ministry of Culture but were dispersed and beaten by police and civil servants. In Nicaragua, police forces looted a radio station known for being critical of the regime of President Daniel Ortega. In Guatemala, Panama, and Mexico, merchants and business owners protested against the economic fallout from coronavirus lockdown measures. In Mexico and Panama, health workers protested, demanding vaccinations against the coronavirus. Lastly, in El Salvador, labor groups in the capital protested against the mayor of San Salvador ahead of municipal elections.

In Haiti, demonstrations demanding President Jovenel Moise step down continued throughout the country. Demonstrations were recorded in Port-au-Prince, Cap-Haitien, Les Cayes, and Leogane. Demonstrators erected barricades with burning tires and debris, and stole cars to block traffic. In Port-au-Prince, police intervened, firing tear gas and live ammunition, hitting at least one protester.  Members of the opposition argue that the president’s constitutional mandate ends in February 2021, while members of the government claim that his mandate extends to 2022. President Moise was elected in 2016 after a first election round held in 2015 that was suspended for fraud. He took office for his five-year mandate in February 2017 (Europa Press, 16 January 2021).

Meanwhile, in several neighborhoods in Port-au-Prince, soaring kidnapping rates continued to spark unrest. Members of the G-9 gang alliance, led by former police officer and leader of the G-9 Jimmy ‘Barbecue’ Cherizier, marched in support of the completion of Moise’s five year mandate until 2022. They further protested and denounced kidnappings and insecurity in the capital, even though kidnappings are most commonly committed by gangs. The protest ran its course peacefully, contrasting with law enforcement’s violent response to citizens’ demands for security and democracy. The G-9 march was followed by a National Police of Haiti (PNH) operation into areas controlled by the G-9 to deter criminal activities. Police operations against the G-9 alliance are unusual as Cherizier allegedly enjoys close ties with the ruling elite of Haiti, allowing members of the alliance to act with relative impunity (InsightCrime, 23 July 2020). However in December 2020, the PNH launched an operation into G-9 controlled territory after a coordinated attack on three separate police patrols by the G-9. This prompted Prime Minister Joseph Jouthe to issue a declaration of war against the gang alliance. The Moise administration has been further pressured by the United States to bring Cherizier to justice. Whether these incursions into the territory of Cherizier represent an earnest effort to arrest him or are little more than window dressing remains unclear (For more on increased gang violence amid rising authoritarianism in Haiti, see ACLED’s 10 conflicts to worry about in 2021 series).

Also in Port-au-Prince, on 28 January, around 200 people and journalists attended a protest denouncing police violence against journalists. This follows the shooting of a journalist, and the beating of another two by police, while reporting on a protest in Port-au-Prince the week before. Protesters denounce the worrying increase of violence against journalists. In 2020, Haiti’s ranking in the Press Freedom Index dropped due to physical intimidation targeting journalists covering demonstrations (Reporters Sans Frontiere, 2020). In 2020, ACLED records at least 9 attacks targeting journalists in Haiti.

Meanwhile in Mexico, 19 Central American migrants were found dead with gunshot wounds inside two burning vehicles in the state of Tamaulipas. According to initial reports, 13 of the victims were from Guatemala. Witnesses attribute the killings to the Cartel del Noroeste. Cartels have been controlling human smuggling routes in many parts of Mexico and extorting migrants transiting through their territories (BBC World, 29 January 2021). The Cartel del Noroeste formed out of  internal divisions in the Los Zetas cartel. It has been embroiled in a conflict with the Gulf Cartel over control of the state of Tamaulipas and the US-Mexico border.

In Cuba, artists and activists of the 27N movement protested outside the Ministry of Culture on 27 January, demanding an audience with the Vice Minister of Culture. The group has demanded the cancellation of Decree 349, which restricts artistic freedom through the registration of artists to a state body (Amnesty International, 24 August 2018).  The 27N movement was initiated on 27 November 2020 following the arrest of rapper Denis Solis, and the violent repression of the subsequent hunger strike. The strike was organized by the San Isidro Movement, which is a collective of artists promoting freedom of expression (Museum of Modern Art, 23 December 2020). The gathering of protesters was struck down by civil servants and state security forces. The Minister of Culture, Alpidio Alonso, allegedly assaulted protesters outside of his ministry, and a number of prominent artists and activists were arrested by state security forces before arriving at the ministry.

In Nicaragua, police forces looted a radio station known for its opposition to the regime of President Daniel Ortega. Ahead of the next general elections, scheduled on 7 November 2021, the government crackdown on opposition groups and journalists has increased. This is the second time journalists have been targeted with violence in January. Earlier in January 2021, a journalist was beaten by a militia for reporting on anti-government protests. Similarly, in December 2020, the number of attacks against political opponents in Nicaragua doubled compared to the previous month, with at least eight attacks reported. The rise of violence against journalists and members of the opposition recalls the 2016 elections which were marred by harassment campaigns, stigmatizations, and arbitrary arrests of journalists (Reporters Sans Frontieres, 2020). According to the Inter-American Commission on Human Rights, over 90 journalists fled Nicaragua between April 2018 and April 2020 due to persecution (Human Rights Watch, 2020).

Last week, coronavirus-related protests in the region rose, accounting for over one-third of the total number of demonstration events recorded in the region by ACLED. The number of coronavirus cases in Latin America has been rising, and most countries in the region are still lacking a clear vaccination strategy (Agencia EFE, 8 January 2021). Earlier in January, the director of the Pan-American Health Organization (PAHO) warned that a great number of hospitals in the Americas are at or are running near full capacity due to the number of coronavirus patients (PAHO, 19 January 2021). In Mexico, Honduras, and Panama, business owners and merchants protested against lockdown measures, which have been affecting their businesses. Meanwhile, in the state of Campeche in Mexico, and in at least seven cities in Panama, health workers protested, demanding to be vaccinated against the coronavirus. In Honduras, doctors protested and called on people to respect coronavirus-related measures to prevent the spread of the virus.

In El Salvador, a number of protests were organized ahead of the municipal elections in San Salvador on 28 January. Protesters from various labor groups and unions claim that the mayor has increased tax rates and is planning to privatize various public services at the expense of workers. In turn, the mayor of the capital city claims that the protests were staged by the opposition as a way to influence the upcoming elections.