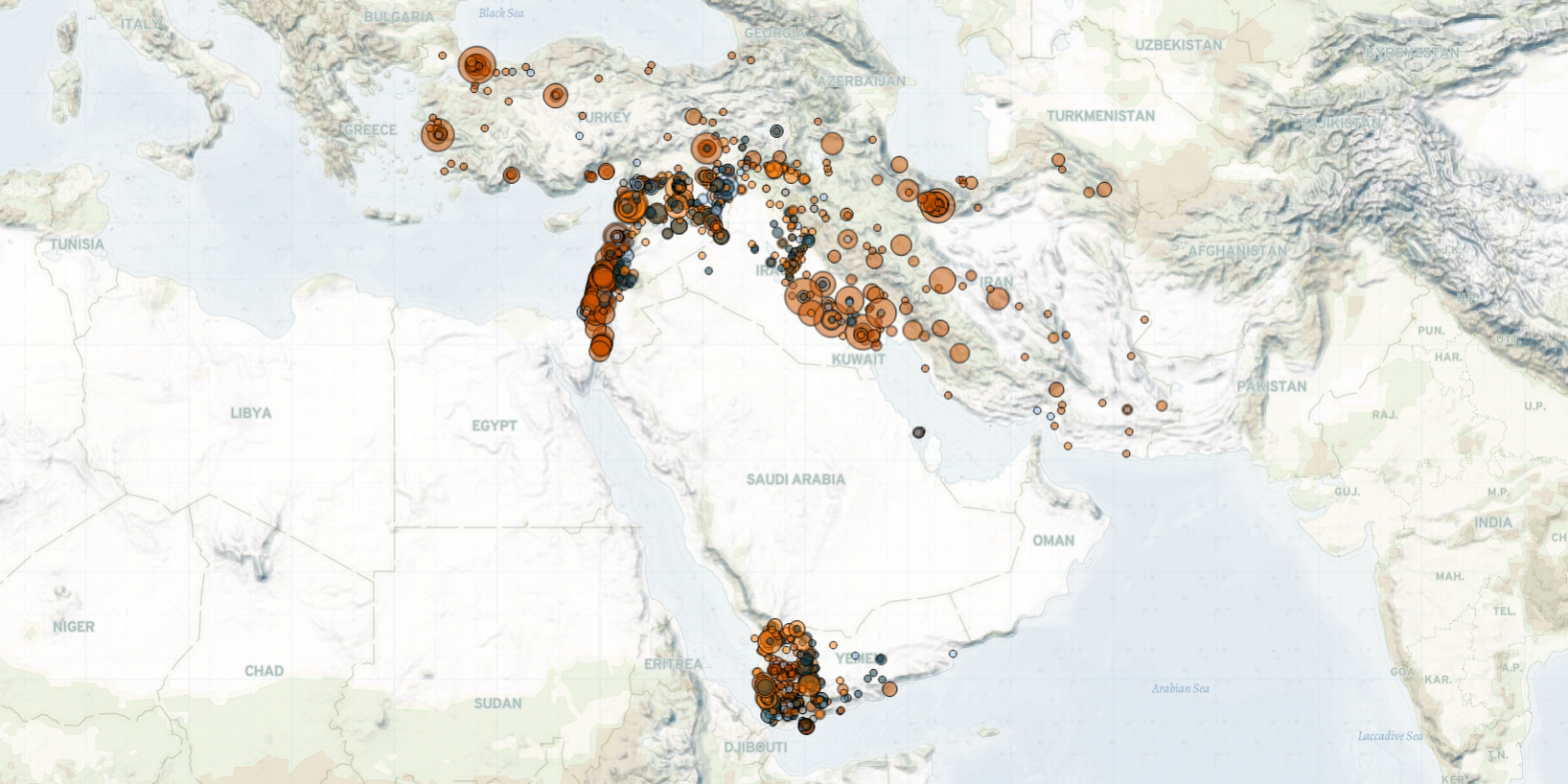 Last week in the Middle East, violent demonstrations broke out in Lebanon over the coronavirus lockdown and the deteriorating economic situation. Mass demonstrations were also staged in Yemen, where people took to the streets in Houthi-controlled areas against US sanctions. Clashes between Houthi and pro-Hadi forces continued in Yemen’s Marib, Sadah, and Hodeidah governorates, while the Houthis also clashed with the Saudi military in the border areas near Jizan’s Al Harth district. In Syria, the Russian military carried out hundreds of airstrikes against the Islamic State (IS), while IS attacked the positions of regime forces, leading to the deaths of 18 fighters from both sides. Elsewhere, the Global Coalition’s airstrikes killed the top IS leader in Iraq on 27 January. Lastly, authorities demolished the foundations of a Sunni mosque under construction in Iran’s Sistan and Baluchestan province.

In Lebanon, there was a threefold increase in the number of demonstration events compared to the week prior. Violent demonstrations broke out for five consecutive days in Tripoli over the coronavirus lockdown that began on 14 January and was extended to 8 February. Demonstrators set fire to government buildings and threw petrol bombs, hand grenades, and stones at security forces, who responded by firing water cannons, tear gas, and live ammunition (Associated Press, 28 January 2021). Two demonstrators were reportedly killed, and hundreds have been injured. Several other demonstrations were held across the country in solidarity with the demonstrators in Tripoli and against deteriorating economic conditions. The large majority of the workforce in Tripoli — Lebanon’s second-largest city and one of its most impoverished — relies on day-to-day income and has been left without income amid the national round-the-clock curfew (Washington Post, 29 January 2021). During the coronavirus pandemic, Lebanon’s GDP has declined by 19% in 2020, leaving half of Lebanon’s population under the poverty line and a quarter in extreme poverty (BBC, 28 January 2021).

Meanwhile, pro-Hadi and Houthi forces clashed, predominantly in the Marib, Sadah, and Hodeidah governorates, with stagnating frontlines except for tiny Houthi advances in the Raghwan district of Marib. Hodeidah saw the most violence, predominantly Houthi artillery operations.

In Syria, an IED went off in Tell Abiad city in Ar-Raqqa in the Operation Peace Spring area controlled by Turkish-backed Syrian National Army (JWS), killing three civilians and wounding seven others. Meanwhile, clashes took place between opposition rebels and People’s Protection Units (YPG) along the frontlines in Azaz district in northern Aleppo. Turkish forces shelled Tall Refaat with rockets, killing four civilians and wounding several others. In the Syrian desert, Russian warplanes carried out hundreds of airstrikes on IS positions in the area. In Sokhneh desert in Homs, IS attacked a regime force position and destroyed a tank using an anti-tank guided missile (ATGM). Additional clashes resulted in the killing of 18 fighters from both sides. Meanwhile, regime forces and allied militia forces were deployed to several areas in Dar’a province in preparation for a military offensive against Tafas. Regime forces and Russia had demanded that six local opposition leaders from the area surrender their weaponry and be relocated to northern Syria. Russia threatened airstrikes on opposition strongholds in Dar’a should they refuse the demands. Reports suggest that at least two of the commanders stated their unwillingness to surrender. They called for another reconciliation agreement with the regime, one that would stop arbitrary arrests by the regime and the expulsion of pro-Iran militia groups from the area (North Press Agency, 26 January 2021).

In Iraq, Global Coalition airstrikes on 27 January near Kirkuk city killed Abu Yasser Al Issawi, the top IS leader in Iraq who coordinated the group’s activities, along with nine other IS fighters (The New York Times, 29 January 2021). The operation, which was conducted jointly with Iraqi forces, came in retaliation for an IS suicide attack in Baghdad two weeks ago.

Lastly, in Iran, the foundations of a Sunni mosque under construction in Iranshahr in Sistan and Baluchestan province were demolished by Iranian authorities last week, sparking demonstrations. The Iranshahr mayor suggested that the demolition was carried out as the construction plan was not approved (RFE/RL’s Radio Farda, 25 January 2020). However, Baluch activists, noting that the construction of two other Sunni mosques in the region was also halted in recent weeks, suggest that the demolishment is meant to put “pressure” on Iran’s Sunnis (Baloch Campaign, 23 January 2021). The Sunni minority — constituting about 10% of Iran’s population — is subject to discriminatory laws and practices, including being refused the right to build a mosque in Tehran. They also face difficulties in repairing existing mosques (UN Human Rights Council, 18 July 2019).