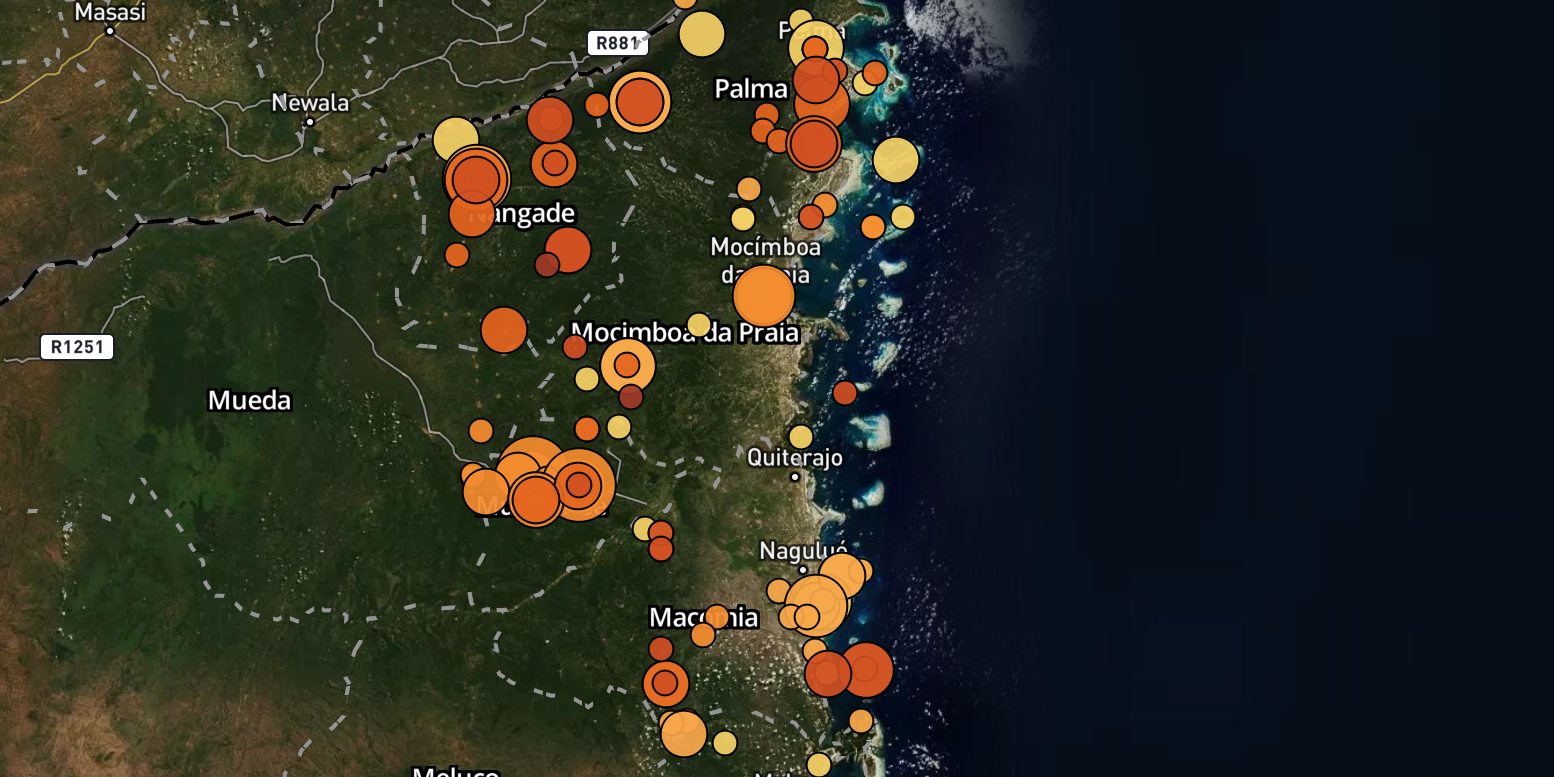 Insurgent activity remained low in Cabo Delgado last week, while actions by government forces and their allies appeared to increase. The extent of government offensive operations remains to be seen, but could end up being quite significant.

On 1 February, insurgents attacked Lijungo, Nangade district. Lijungo sits about 15 kilometers west of Nkonga, where there had been repeated insurgent attacks in the days leading up to the Lijungo incursion. No details have yet emerged about the Lijungo attack. However, reports indicate that most of the civilians in the village had already fled to Nangade town before the attack took place.

On 2 February, in an attempt to relieve the supply shortage in Palma town, a military escort accompanied at least 14 vehicles carrying food on the segment of the R763 that runs from Nangade town to Palma town. The convoy reached Palma without incident, and another convoy of 30 vehicles followed on 6 February. Insurgents have carried out frequent attacks along the road in recent weeks as part of an apparent attempt to cut Palma off from supply routes. Before the convoys arrived, the situation in Palma had become so desperate that civilians were braving the road to Nangade in hopes of acquiring food. Cabo Ligado reported that rice prices were 120 meticais ($1.59) per kilogram on 29 January — already quite high. By 1 February, prices had doubled to 240 meticais ($3.19) per kilogram.

According to a report, a government-backed militia based in Mueda engaged insurgents near Ntchinga, Muidumbe district on 5 February. The source described the insurgent position as a “base,” but no further reports have emerged to confirm the account.

Reports also began coming in on 5 February of a large-scale government offensive in Mocimboa da Praia district. The reports indicate a substantial ground force supported by eight helicopters advanced north from Muidumbe district into Mocimboa da Praia district, making it as far as Awasse. There are no indications yet as to whether the offensive has succeeded in holding Awasse, which has been the major obstacle to previous attempts to retake Mocimboa da Praia town. Road movement is likely to be slow, as rain has finally reached Cabo Delgado’s northern districts.

Further information came to light regarding the previously reported 31 January attack on Nkonga, Nangade district. During the attack, insurgents stole food from the village and kidnapped two girls.

Mozambican President Filipe Nyusi’s reshuffle at the top of his security services hit a major obstacle when General Eugénio Mussa died of an undisclosed illness. Nyusi appointed Mussa both Chief of Staff of the Mozambican military and commander of the Northern Operation Command Post in Mueda in early January, making him the leading figure in Mozambique’s counterinsurgency effort. The move represented not just a change in personnel but a structural shift for the government. Before Mussa’s appointment, it was police chief Bernardinho Rafael who commanded the Mueda base and his police units that took the lead in the conflict with insurgents. Moving control of strategic decisions to the military — and to a general with whom Nyusi had a working relationship dating back to Nyusi’s time as defense minister — appeared to indicate that the president would take a more personal interest in the day-to-day conduct of the conflict.

Mussa’s death, which was rumored for days before being officially confirmed on 8 February, now throws that plan into disarray. No new commander or chief of staff has been publicly announced. Mussa’s deputy, Bertolino Jeremias Capitine, is a Renamo member, and therefore likely poses a political problem for Nyusi at a time when civil society members are already questioning his management of the conflict. Going back to Rafael, however, would return the security forces to a state of affairs that Nyusi found untenable barely a month ago. It seems likely that Nyusi will appoint a new military officer to lead government forces in Mueda. The new appointee will have to overcome the challenge of being a clear second choice to assert themselves in the bureaucratic battles over the government’s strategic direction. This may delay achieving unified command between the police and the military, even if the military ultimately retains the lead role.

The rainy season decline in insurgent attacks in Cabo Delgado has led to speculation that the government has made significant military gains against the insurgency in recent weeks, a narrative that has also appeared in pro-government propaganda. There are encouraging signs for the government on the security front, and last week’s offensive in Mocimboa da Praia has the potential to bring more. However, the lack of insurgent activity in January is not necessarily indicative of government success. Rain and lack of resources throughout the province due to the rhythms of agricultural production is an annual problem around this time of year, restraining insurgent action regardless of government gains. As an example, in January 2020, ACLED records 25 total events involving insurgents resulting in 50 fatalities in Cabo Delgado. This January, there were a comparable 22 total events involving insurgents, resulting in 47 fatalities. Far from predicting the decline of the insurgency, the conflict’s slow pace in January 2020 preceded the insurgent’s most successful year by far.

Among the successes the government can reasonably celebrate, however, is last week’s return of Médecins Sans Frontières (MSF) to Macomia district. The international NGO’s medical work is not linked to government military operations, but its decision to return to the district reflects both the ongoing lack of insurgent strikes near the district capital and the number of civilians who have chosen to return to the area. MSF is providing medical services in Muagamula, on the outskirts of Macomia town, where it is tending to 100 patients per day. MSF teams are also traveling further afield in the district to get a sense of the health challenges civilians there are facing. MSF pulled out of Macomia in June 2020 after insurgents attacked its health center there, citing ongoing insecurity in the district. Since then, Macomia civilians have been forced to rely on security forces for medical care or travel long distances to clinics outside the conflict zone.

That MSF is now able to return to Macomia suggests a major improvement in the prospects for security there. It also represents a major quality of life improvement for civilians in the district. MSF teams have reportedly found significant malnutrition among Macomia civilians — especially small children — as well as a high number of untreated sexually transmitted infections. A flow of medical and, potentially, other humanitarian aid to the district will help address those problems.

The government is ordering civil servants who had fled violence in Palma and Nangade districts to return to their jobs. The Palma order, which was reported earlier, has caused much consternation among civil servants, as the only way to get to the district is via the frequently-attacked R-763. It is unclear whether the convoys that have begun along the road will begin taking passengers in order to allow civil servants a way back to their posts.

On the international front, Nyusi thanked an African Union (AU) summit on 6 February for African countries’ support in the Cabo Delgado conflict and urged the organization to “reiterate its total rejection [of terrorists]… wherever they hide in our continent.” The AU has condemned the insurgency in Mozambique but has taken few steps toward any military intervention in the conflict.

This report has been updated for clarity.

On 1 February 2021, insurgents attacked civilians in the village of Lijungo (Nangade, Nangade). No fatalities or injuries reported.

On 5 February 2021, insurgents clashed with Mozambican Defense and Security Forces near Chinda (Muidumbe, Muidumbe). No fatalities or injuries reported. 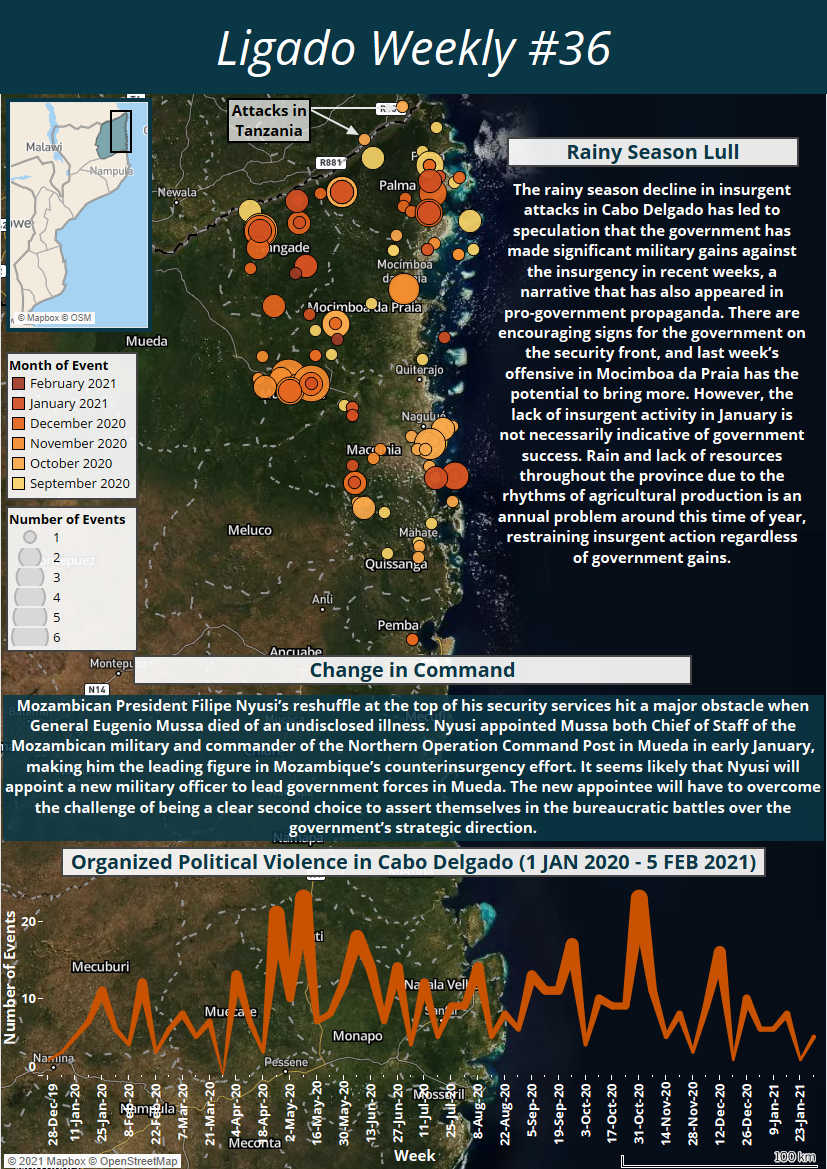