Lessons From the #EndSARS Movement in Nigeria

On 3 October 2020, in Nigeria, operatives of the Special Anti-Robbery Squad (SARS) allegedly shot a young man at Wetland Hotel in Ughelli, injuring him. This incident was filmed and went viral, sparking an outcry on social media against SARS using the hashtag #EndSARS. By 8 October, demonstrations associated with this hashtag had begun to increase in size and number throughout Nigeria, peaking at 26 demonstration events on 13 October (see figure below). On 20 October, Nigerian military forces fired live ammunition at #EndSARS demonstrators in Lagos who had sat down in the road to peacefully protest against police brutality, reportedly killing at least 15. Young Nigerians are still reeling from the shock and after effects of the government’s heavy-handed response. Military officials have rejected claims that they killed unarmed protesters, alleging that soldiers had only fired blank bullets (BBC, 15 November 2020). The reaction has widened the distrust between young Nigerians and the government. This analysis identifies three lessons from the #EndSARS movement and highlights what the government’s response means for Nigeria’s fragile political stability and security. 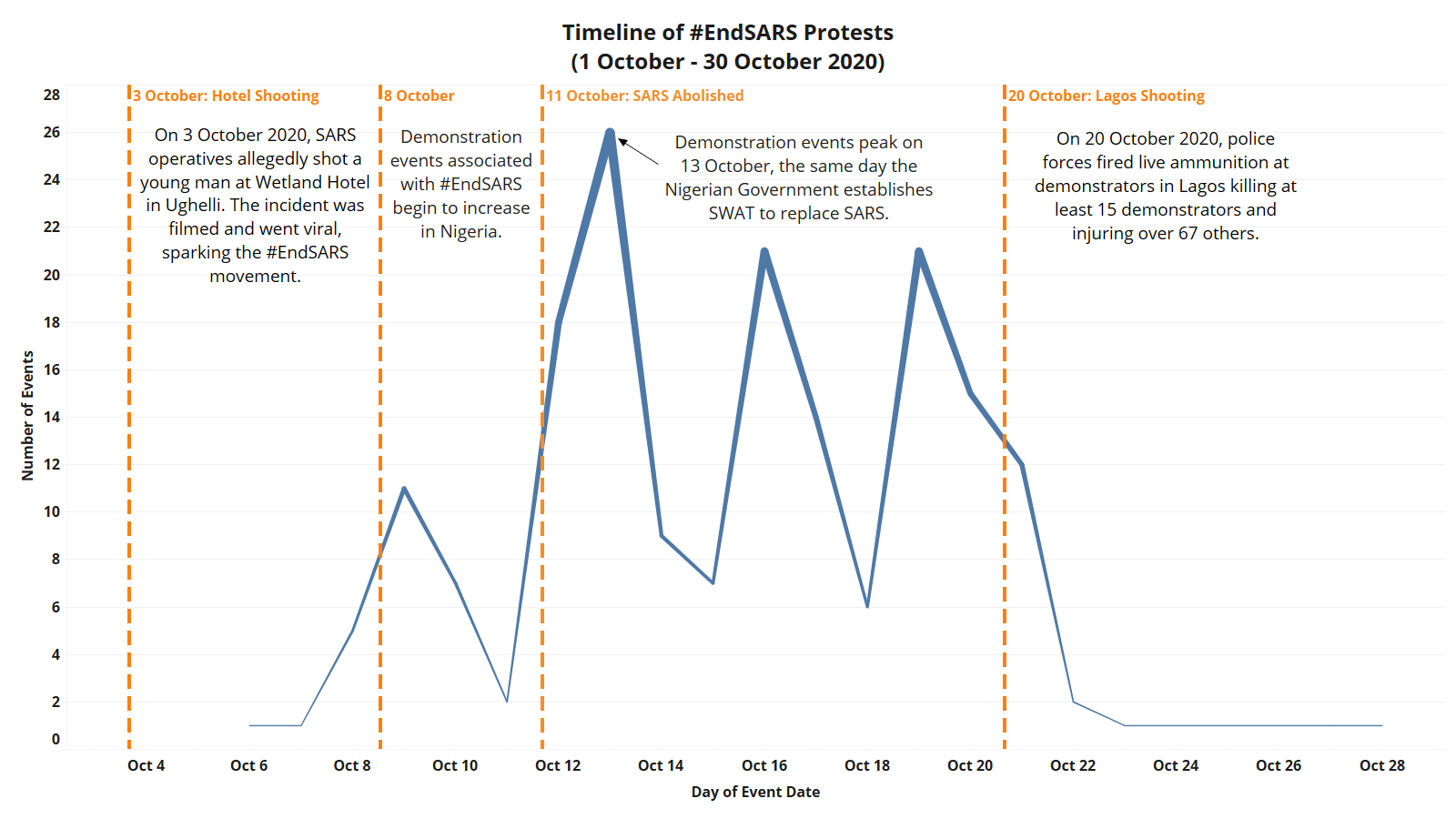 The Special Anti-Robbery Squad, popularly known as SARS, was established as a special police unit in 1992 to tackle increasing incidents of armed robberies and kidnappings for ransom by criminal elements operating across Nigeria (Vanguard, 23 December 2017). Originally set up to operate independently in order to target criminal groups, the unit’s success hinged on its anonymity and mode of operation. SARS operatives conducted covert operations in plain clothes and unmarked vehicles to support police operations responding to community distress calls on armed robberies and other serious crimes. Over the years, however, SARS officials have been implicated in widespread human rights violations and have garnered a reputation for arbitrary arrests, torture, rape, extortion, unlawful detention, and extrajudicial killings.

In recent years, Nigeria has experienced a significant increase in violence targeting civilians by state forces. ACLED records nearly 100 events of violence targeting civilians perpetrated by state forces in 2020 alone (see figure below). The Nigerian government has failed to bring perpetrators to justice despite promises of police reform. This has continued to embolden SARS officials and other security personnel to operate with impunity. After the 3 October 2020 shooting of an unarmed man, for example, police sources denied the incident despite video evidence to the contrary, reporting instead that the victim was arrested and sustained injuries when he jumped out of a police patrol car (Concise, 5 October 2020). 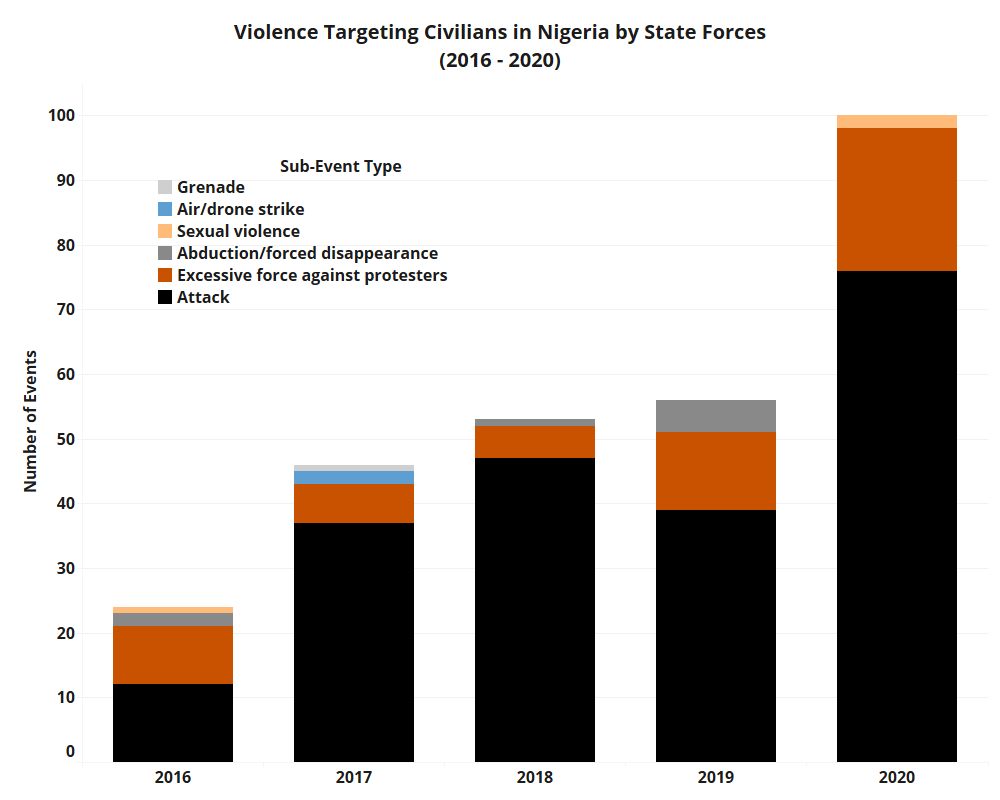 The Nigerian government’s response to the public outcry over police brutality and excessive force against protesters has unfortunately further widened the growing distrust between Nigeria’s young population and the government. During the month of October 2020, ACLED recorded over 180 demonstration events associated with the #EndSARS movement. The majority — 86% — of events were peaceful protests. An estimated 10% of peaceful demonstration events associated with the #EndSARS movement were met with excessive force (see figure below), more than other demonstration events during the same time period. 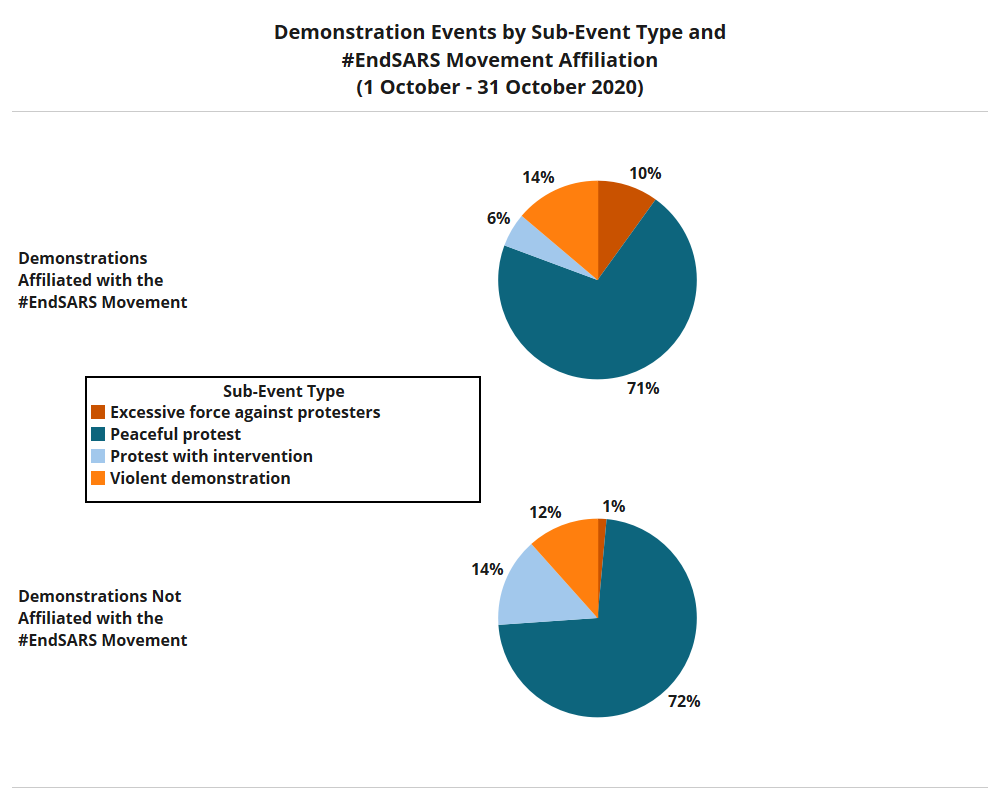 Although the government has tasked all 36 states and the Federal Capital Territory (FCT) with setting up panels of inquiry into public complaints relating to police brutality and harassment, many supporters of the #EndSARS movement have doubted the sincerity of investigations and the government’s willingness to implement police reform recommendations (Premium Times, 9 November 2020). The government, for example, had disbanded the Special Anti-Robbery Squad multiple times within the last five years — first in 2014, then in 2015, and again in 2017. As such, its latest announcement on 11 October 2020 that the police unit had been again disbanded was viewed with skepticism (BBC, 11 October 2020). The establishment of the yet to be deployed Special Weapons and Tactics (SWAT) squad in place of the disbanded SARS two days later also demonstrated to supporters the government’s lack of political will to address unlawful imprisonment, extortion, and extrajudicial killings (Vanguard, 13 October 2020).

Furthermore, considering that #EndSARS demonstrations started in southern Nigerian states before spreading to other parts of the country, northern politicians and supporters of President Muhammadu Buhari have framed the movement as a southern agenda to topple the current northern political administration (Vanguard, 23 October 2020). However, such rhetoric discredits the legitimate grievances of #EndSARS supporters and demonstration events held in Kano, Sokoto, and other parts of northern Nigeria. #EndSARS transcended traditional geopolitical barriers. Framing the movement along a northern-southern divide risks limiting opportunities for the Nigerian government to end the impunity enjoyed by abusive police and to take steps to rebuild confidence and trust.

Three Lessons from the #EndSARS Movement

As noted, demonstration events associated with #EndSARS peaked on 13 October, with 26 simultaneous events across Nigeria calling to end police brutality. This peak coincided with the government’s decision to establish a SWAT unit to replace SARS. However, since the 20 October demonstration in which demonstrators were killed, Nigerian authorities have further clamped down on the #EndSARS movement. Government officials have accused prominent supporters, including businesses, of financing and sponsoring terrorism. They have arrested other supporters and restricted local media reporting on excessive force against protesters by security personnel (Sahara Reporters, 12 November 2020; Premium Times, 16 November 2020; Vanguard, 27 October 2020).

The #EndSARS movement saw Nigeria’s marginalized youth — who make up 35.6% of the total population — participate in one of the largest demonstration movements since the country’s democratic transition in 1999 (National Bureau of Statistics; New York Times, 13 November 2020). The social movement was not only a rallying call for comprehensive police reform, but also became a symbol of hope and change, teaching participants three key lessons.

The #EndSARS movement primarily demonstrated freedom from the ethno-religious tensions that usually plague the framing of Nigeria’s domestic security and political issues. Young Nigerians in all six geopolitical zones united around a common goal to end police intimidation, oppression, and brutality. Demonstrations were held in at least 25 of the country’s 36 states (see figure below), with events recorded in Lagos, Abuja, Rivers, Enugu, Kano, and Plateau. Second, it showed young Nigerians that it was possible to have an accountable and transparent civil society that is responsive to the needs of its citizens. Women’s groups, such as the Feminist Coalition formed in July 2020 with a mission to advocate for women’s equality, offered their platform to fundraise and disburse funds towards social services such as food, shelter, healthcare, physical security, and legal aid in sustaining #EndSARS demonstrations across the country (Washington Post, 4 November 2020). Third, with about half of the registered voters in Nigeria aged between 18-35, the movement highlighted the need for more young people to exercise their civil and political rights to speak out against injustices and to demand change from state leaders elected to serve the needs of the populace (Reuters, 13 February 2019; Punch, 18 October 2020). 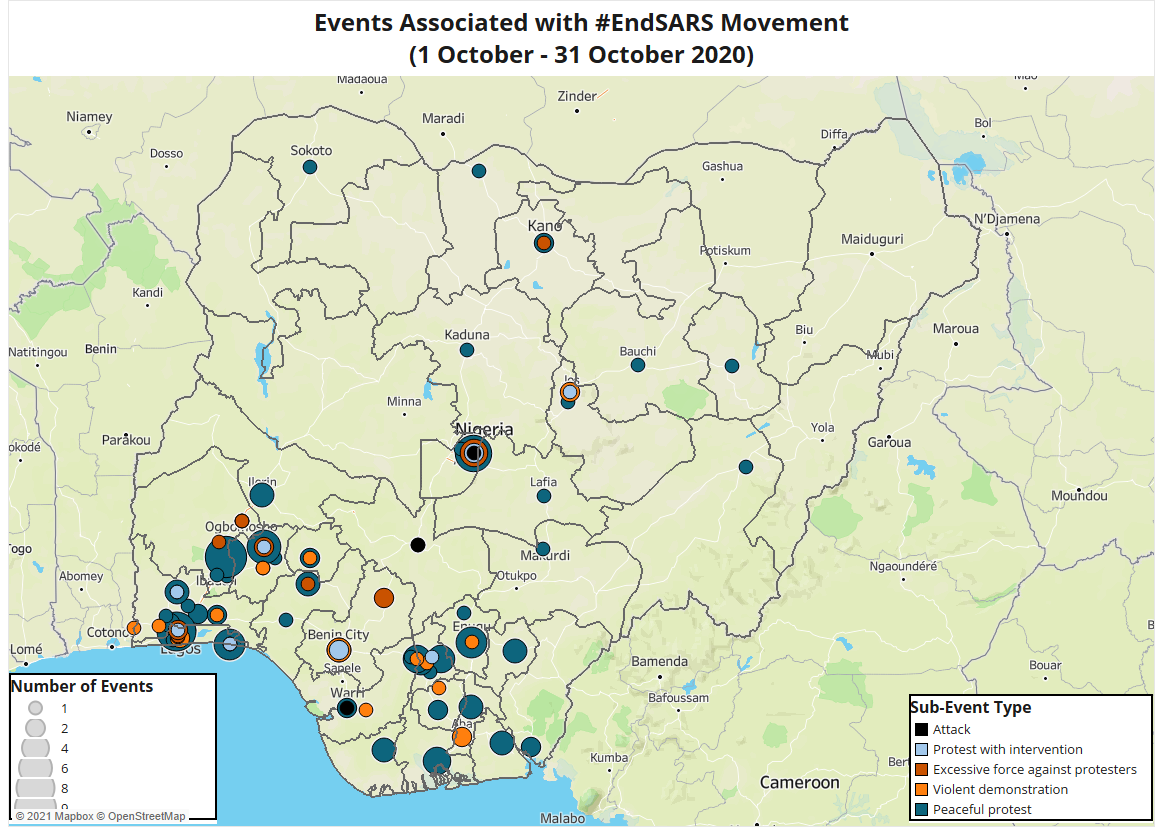 Nigeria has seen a significant increase in violence targeting civilians by state forces over the last five years. Demonstrations associated with the #EndSARS movement against this violence were more likely to be subject to excessive force than other types of demonstrations. More than half of all events of excessive force against protesters by state forces in 2020 were recorded at protests associated with the #EndSARS movement. These acts of excessive force resulted in over two dozen reported fatalities during the month of October, most of which occurred in Lagos on 20 October when Nigerian military forces fired live ammunition at demonstrators. While supporters of the #EndSARS movement staged some demonstrations in November and December, including several at panels of inquiry established in response to the violence, there has been little activity since the end of October. It remains to be seen whether the panels of inquiry set up by the government will result in police reform, and if this will help the government regain the trust of its young citizens.

Dr. Olajumoke (Jumo) Ayandele was a Researcher at ACLED. Her research interests broadly focus on understanding the dynamic relationship and intersection between African conflict, human development, and political stability. She holds a Ph.D. in Global Affairs from Rutgers – The State University of New Jersey, an M.P.A. in International Development Policy and Management, and a B.A. in Economics, both from New York University.