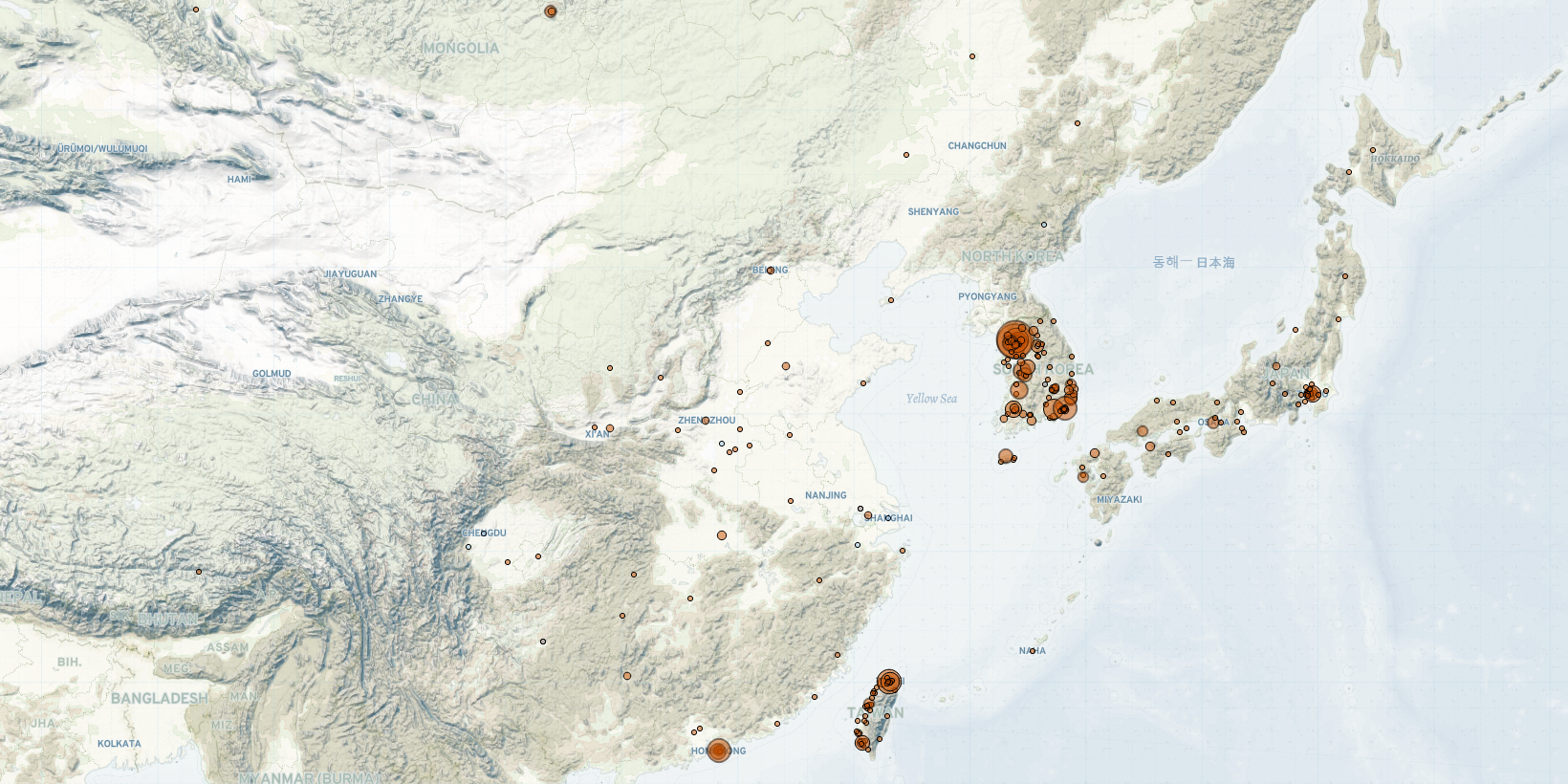 Last week in East Asia, solidarity rallies with the people of Myanmar took place in Japan and South Korea against the recent military coup. In North Korea, the government implemented a strict lockdown in two provinces on the Sino-North Korean border. Also in North Korea, two civilians trying to defect were arrested and subject to torture. In South Korea, delivery workers protested against “unfair” delivery regulations in certain buildings. Small business owners continued to demand compensation and asked the government to loosen the COVID-19 restrictions ahead of the Lunar New Year holiday. Finally, a new law came into force in China permitting coast guards to launch pre-emptive strikes to deter threats posed by foreign vessels in disputed waters that are claimed by China.

Solidarity rallies with the people of Myanmar, which demand the release of the country’s civilian leader Aung San Suu Kyi, were reported in Japan and South Korea last week. In Japan, large-scale protests against the military coup in Myanmar took place in Tokyo and Fukuoka. The largest protest occurred on 3 February, when about 3,000 Burmese people living in Japan as well as Japanese supporters gathered outside the headquarters of the Ministry of Foreign Affairs of Japan to demonstrate against the coup (FNN, 3 February 2021). They called on the Japanese government to push for the release of Aung San Suu Kyi, as well as the other democratically-elected leaders currently detained (Asahi Shimbun, 3 February 2021). In South Korea, students staged a silent march towards the Myanmar Embassy in Seoul to protest against the recent coup and to show their support for democratization in Myanmar (Yonhap News Agency, 5 February 2021).

In North Korea, the government resumed a border lockdown in Ryanggang and North Hamgyong provinces to prevent the spread of the coronavirus (Daily NK, 4 February 2021; Daily NK, 5 February 2021). This new order has been imposed to avoid the border residents smuggling products from China into North Korea and consequently to block the transmission of COVID-19. While previous lockdowns banned travel to other parts of the country, the new order mandates residents to stay home and to not commute even for work. All roads are blocked, and vehicle use is prohibited. It appears that the measures were again triggered by a smuggling incident of goods from China (Daily NK, 4 February 2021).

Separately in North Korea, it was reported last week that on 28 January, two North Koreans trying to defect were arrested by border patrol stationed on the Sino-North Korean border in Ryanggang Province (Daily NK, 5 February 2021). Sources inside North Korea reported that the suspected defectors were regarded as spy agents and hence subject to harsh torture (Daily NK, 5 February 2021). The number of defections has sharply dropped in 2020 as the North Korean authorities imposed strict measures on its borders, fearing the spread of COVID-19. Compared to 1,047 defections in 2019, only 229 defections were reported last year (Al Jazeera, 20 January 2021).

In South Korea, delivery workers affiliated with the Korean Confederation of Trade Unions and Rider Union staged demonstrations against “unfair” delivery regulations of certain residential and office buildings. The workers claim that particular regulations require them to use freight elevators, to remove safety equipment when entering buildings, or to ban motorcycle use, instead urging them to deliver on foot. They asked the National Human Rights Commission of Korea (NHRCK) to investigate the situation, arguing that such regulations are an infringement of their human rights (The Korea Times, 2 February 2021). Since the onset of the pandemic, the demand for the delivery service has increased exponentially, and workers have continued to demand improved working conditions and safety measures.

Also in South Korea, the government extended strict social distancing measures for another two weeks to prevent the further spread of the coronavirus during the Lunar New Year holiday. Restaurants and bars in the greater Seoul area are only allowed to operate until 9 pm, and private gatherings of five or more are also forbidden for another two weeks (Korea JoongAng Daily, 31 January 2021). Hence, small business owners continued to demonstrate against the restrictions, urging the government to provide adequate compensation and to reexamine the current measures. They also filed petitions with the Constitutional Court, claiming that the measures are unconstitutional (Yonhap News Agency, 4 February 2021). In response, authorities announced the possibility of loosening social distancing measures before the holidays if the rate of new infections reduces significantly this week (Yonhap News Agency, 2 February 2021).

Lastly, in China, the government issued a statement in opposition to a US warship sailing within 12 nautical miles of the China-controlled Paracel Islands in the South China Sea on 5 February, a day after it passed through the sensitive Taiwan Strait. While the US emphasized that the mission was in accordance with international law, China viewed it as a deliberate provocation, claiming that the move infringed on its sovereignty (CNA, 4 February 2021; SCMP, 6 February 2021). Amid already heightened tensions between the two countries, this is the first time since US President Joe Biden’s inauguration that US warships have sailed in such close proximity to China and China-controlled areas (Philippines Daily Inquirer, 5 February 2021). The event follows the passage of a controversial new law on 23 January which permits Chinese coast guards to use‭ ‬“all necessary means”‭ ‬to deter or stop threats posed by foreign vessels in China’s “jurisdictional waters”‭ (Straits Times, 24 January 2021). Under the new law, coast guards are authorized to launch pre-emptive strikes without prior warning, including the use of weapons on foreign vessels in disputed waters. Coast guards are also authorized to demolish structures built in disputed areas that are claimed by other countries. The passage of the law has prompted concerns and criticisms from the governments of Japan and the Philippines, and is likely to heighten concern among China’s neighbors about the prospect of more aggressive operations‭ (ABS-CBN, 28 January 2021; The Diplomat, 4 February 2021).