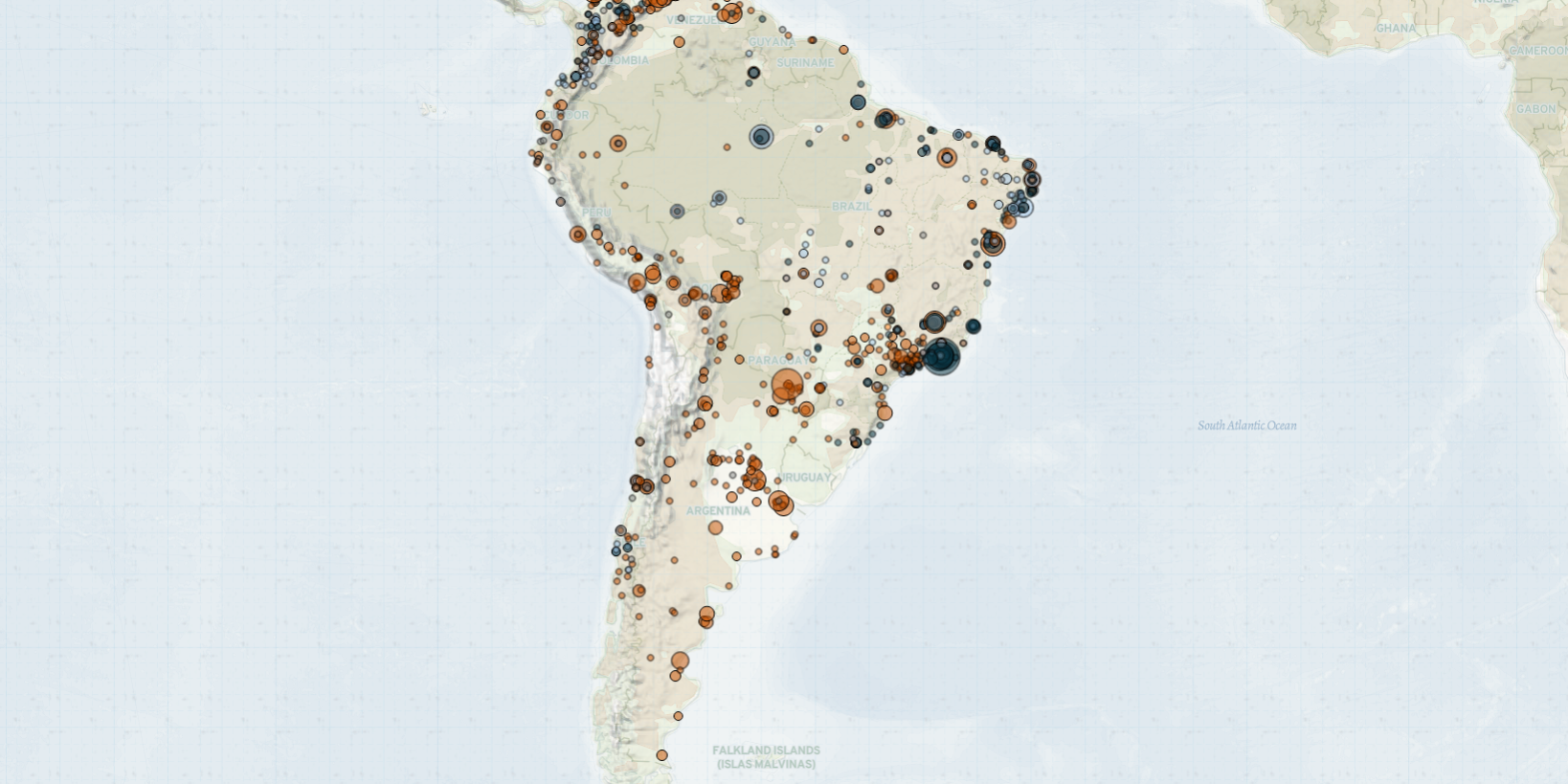 Last week in South America, demonstrations slightly decreased across the region, with political violence levels continuing at similar rates compared with the previous week. In Peru and Brazil, protests were held over the government’s handling of the coronavirus pandemic. In Brazil, intense clashes between organized criminal groups and state forces were reported in the state of Rio de Janeiro. Meanwhile, members of the main opposition party protested in Paraguay, calling for the release of the party president. In Argentina, demonstrators attacked Paraguayan consulates and the embassy to demand an investigation into the killing of two Argentinian girls. In Colombia, fighting between armed groups and state forces continues to be reported. In Chile, citizens rioted after a street artist was killed in a case of police brutality.

Demonstrations related to the coronavirus pandemic were reported in the region, although at lower levels compared to the previous week. In Peru, dozens of citizens and merchants took to the streets for five days in a row in Lima district against the recent total lockdown introduced in 10 regions of the country (Diario Correo, 31 January 2021; Reuters, 27 January 2021). Protesters criticized the measures imposed by President Francisco Sagasti on the grounds that the lockdown constrains their individual liberties. They also opposed the vaccination program against the virus (El Comercio, 1 February 2021). Meanwhile, in Brazil, protests against President Jair Bolsonaro and his hands-off approach in dealing with the pandemic were reported for the fourth consecutive week. The protests were a response to the recent collapse of the healthcare system in Manaus city (O Globo, 31 January 2021). Motorcades were carried out in several cities calling for the president’s resignation, as well as to demand an effective nationwide vaccination campaign as more people outside vulnerable and priority groups are being vaccinated (G1, 27 January 2021).

Also in Brazil, intense clashes were reported in the state of Rio de Janeiro. In São Gonçalo city, nine drug trafficking suspects were killed after exchanging fire with military police officers (O São Gonçalo, 3 February 2021). In the north and west zones of Rio de Janeiro city, the military police carried out several security operations, including in the area of Praça Seca, resulting in the death of ten suspects. The region has been under a violent territorial dispute between drug trafficking and militia groups for several months. The police operation was aimed at repressing constant clashes in the community (G1, 3 February 2021).

In Paraguay, members and supporters of the Authentic Radical Liberal Party (PLRA) protested in Asunción and Ciudad del Este cities, to demand the release of Efraín Alegre Sasiaín, the party’s president. Alegre was arrested on 28 January on charges of tampering with expenditure documents from his presidential electoral campaign of 2018. The PLRA is the main opposition party in the country. Its members accused the Paraguayan President Mario Abdó of conspiracy against the country’s opposition (ABC, 3 February 2021; CNN Español, 29 January 2021). The Puebla Group, an organization composed of left-wing leaders and politicians, including former Brazilian president Dilma Rousseff and former Ecuadorian president Rafael Correa, released a statement repudiating Alegre’s arrest (Grupo de Puebla, 2 February 2021). The statement claims the arrest exposes the legal persecution suffered by politicians in Latin America (Grupo de Puebla, 2 February 2021).

Meanwhile, in Argentina, demonstrations were reported in front of Paraguayan consulates in several cities across the country. Demonstrators called for answers in the two-month disappearance of a girl. They also demanded justice for the death of two other girls, who were of Argentinean and Paraguayan nationalities. The children were killed during a clash between the national Joint Task Force (FTC) and the Paraguayan People’s Army (EPP) on 2 September 2020 in an EPP settlement in Yby Yau area, Paraguay (BBC, 4 September 2020). All three girls were daughters of EPP members. Demonstrators called from an investigation by the Argentinian government on the circumstances of the clash. In La Plata city, demonstrators threw stones and paint at the consulate building. In Buenos Aires city, demonstrators threw petrol bombs at the embassy, leading to a clash with police forces and the use of rubber bullets. Demonstrators were arrested by police and injuries were reported (La Nación, 2 February 2021). The EPP, the main insurgent group active in Paraguay, is a small left-oriented armed organization that aims to reclaim expropriated land belonging to businessmen. The group conducts sporadic attacks on farms along the border with Brazil, but it has also been involved in drug trafficking, extortion, and kidnapping targeting political authorities in recent years.

In Chile, riots broke out on 5 February in the commune of Panguipulli in Los Ríos region after a police officer shot dead a street juggler during an identity check. Right after the attack, rioters built barricades in the streets and attacked police officers and the local police station (Biobio Chile, 5 February 2021le). Demonstrations continued throughout the night, with citizens setting fire to the City Hall. Ten public offices were burned to the ground (Biobio Chile, 6 February 2021, The New York Times, 6 February 2021). Chilean citizens have been calling for police reform in the country since the violent crackdown on the 2019 unrest, when more than 30 people were killed (BBC, 19 October 2020). In October 2019, massive demonstrations broke out across the country against the increased cost of living and inequality (BBC, 21 October 2019).

In Colombia, fighting between armed groups and state forces were reported across the country in at least five departments. In Norte de Santander department, one fighter of the National Liberation Army (ELN) was killed after exchanging fire with military forces in the rural area of Hicari municipality in the Catatumbo region. Armed clashes between different armed groups in the previous days have led to the displacement of at least 50 people in the area (La Opinion, 4 February, 2021). While the ELN has a significant presence in the Catatumbo region, bordering Venezuela, a recent report from the Colombian Army claimed the group aims to expand its activities to other neighboring countries (Vanguardia Liberal, 31 January 2021). According to documents seized from a leader of the ELN killed last year, and made public by Colombian military officers, the ELN allegedly supported politicians in Ecuador and had plans to carry out actions in different Latin American countries (Semana, 7 February 2021). The accusations were denied by both the ELN and the politicians mentioned in the report, including Rafael Correa and Andrés Arauz (Infobae, 30 January 2021).