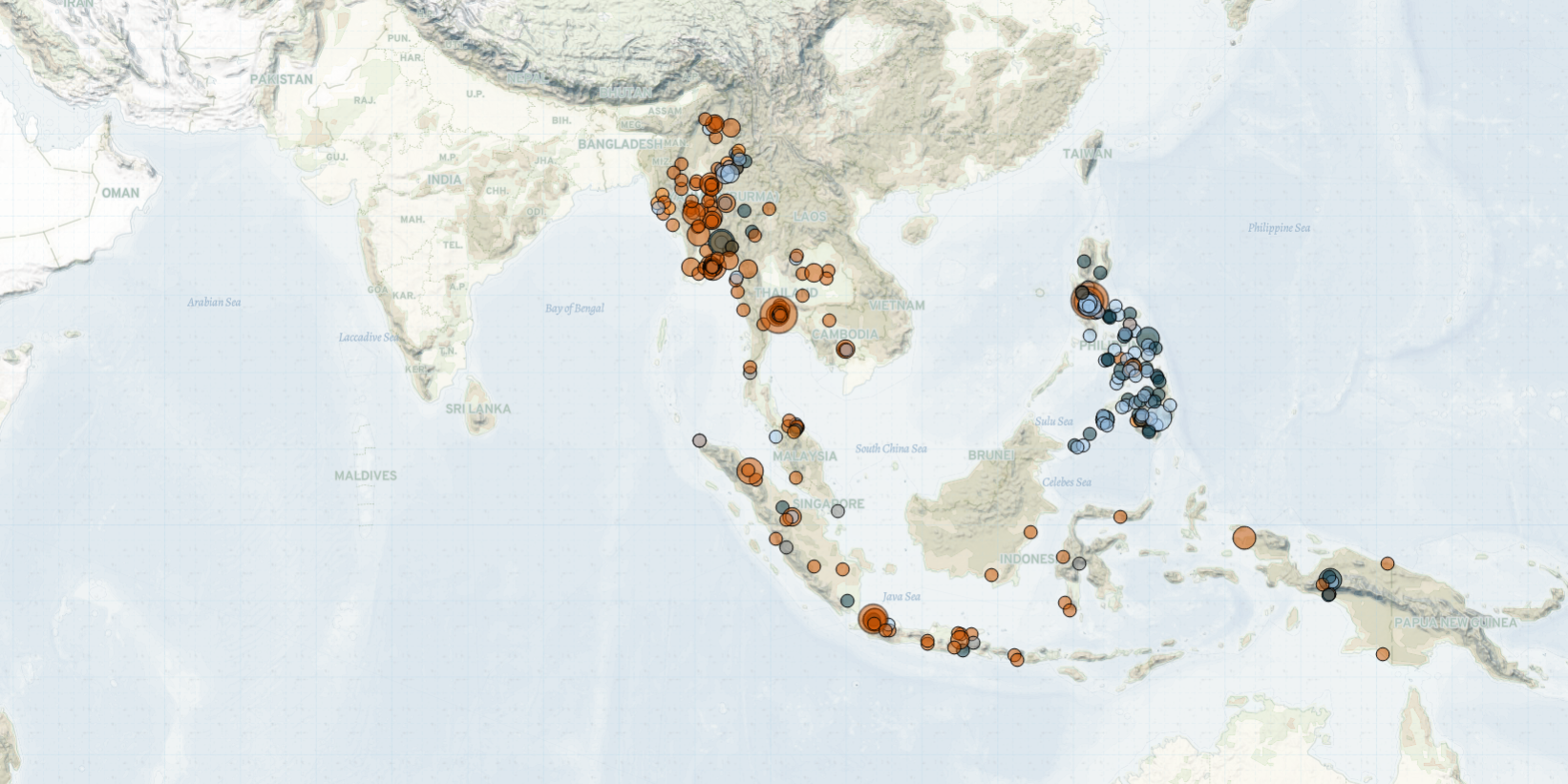 Last week in Southeast Asia, the democratically elected government of Myanmar was overthrown by the military. Following this, protests erupted across the country in opposition to the coup d’état. A civil disobedience movement launched by health workers and other civil servants who have gone on strike has also been quickly gaining momentum since the coup. Solidarity demonstrations against the coup in Myanmar were also held by Burmese and non-Burmese nationals alike in Thailand and Indonesia. Meanwhile, fighting between state forces and rebel groups was reported in Thailand, Indonesia, and the Philippines. In Thailand, violence perpetrated by Malay Muslim separatists in the deep south spiked ahead of previously-postponed peace talks between the insurgents and the Thai government. Meanwhile, Papuan separatists continued to clash with state forces in Indonesia. In the Philippines, fighting between communist rebels and state forces was more lethal last week. Relatedly, people protested both for and against the controversial Anti-Terrorism Act as legal challenges were brought against it last week. The law was passed last year on the grounds that it was needed to curb the communist insurgency.

In Myanmar, the military staged a coup and declared a year-long state of emergency on 1 February, overthrowing the democratically elected National League for Democracy (NLD) government. Top officials of the NLD government, including President U Win Myint and Daw Aung San Suu Kyi, were arrested by military personnel as power was handed over to army chief Min Aung Hlaing. They have since been held incommunicado as many more elected lawmakers, officials, and activists were arrested across the country (AAPP, 4 February 2021). The coup d’état comes on the heels of escalating allegations of electoral fraud by the military and the military-backed Union Solidarity and Development Party (USDP), alongside an increase in protests claiming the same. Such allegations have been dismissed as unfounded by election observers (CNA, 1 February 2021). The military has promised to hold new elections after the state of emergency ends and to hand over power to the winner, but many are skeptical this will occur (Myanmar Times, 5 February 2021).

In the wake of the coup, demonstrations opposing the coup d’état and calling for Aung San Suu Kyi’s release have erupted across the country. In numerous cities, people made noise to express their demands by participating in pot-banging and car honking protests from their residences and on the streets. Meanwhile, health workers went on strike as they launched a civil disobedience movement that was quickly joined by teachers and civil servants, including staff from several ministries (Irrawaddy, 3 February 2021). More than 60 such demonstrations were recorded in Myanmar last week even as bans on social media were imposed alongside disruptions to the internet (BBC, 5 February 2021; CNN, 5 February 2021; AP, 7 February 2021). 1ACLED data are current as of 5 February. ACLED is continuing to source and code events related to the civil disobedience movement. Data will be updated on a weekly basis as per our usual publication schedule.The movement is expected to grow as more people are taking to the streets. Solidarity demonstrations against the coup in Myanmar were also held in Indonesia and Thailand. While these protests largely proceeded peacefully, in Bangkok, a demonstration by Myanmar nationals joined by anti-government demonstrators from the Thai People’s Party movement in front of the Myanmar embassy turned violent as police attempted to disperse the gathering. Three Thai demonstrators were also arrested (Thai PBS World, 2 February 2021).

Meanwhile, separatist violence was reported in Thailand and Indonesia. In Thailand’s deep south, there was a spike in violence by Malay Muslim separatists. In Narathiwat province, five policemen were wounded by a roadside bomb planted by the rebels, while in Pattani province, a civilian was shot dead. Meanwhile, a series of arson attacks were carried out across several provinces. In particular, the rebels targeted security cameras and telecommunication towers (Matichon, 31 January 2021). Messages against Buddhists and soldiers were also found near the sites of the arson attacks in Narathiwat province (Bangkok Post, 31 January 2021). The spike in violence comes just ahead of online peace talks between the main insurgent group in the region, Barisan Revolusi Nasional Melayu Patani (BRN), and the Thai government on 3 February (Khaosod, 5 February 2021). The meeting, which was facilitated by Malaysia, marks a resumption of the peace dialog between the two sides. It was the first such meeting to be held in almost a year after plans to meet last year were postponed due to the coronavirus pandemic (Benar News, 3 February 2021).

In Indonesia, insurgents from the West Papua National Liberation Army (TPNPB) continue to fight with state forces in Papua province. Last week, a rebel was killed during a clash in Sugapa district, Intan Jaya regency. This comes after the rebels killed three soldiers last month. Additionally, it was reported that at the end of January, villagers in Sugapa district were forced to flee their homes following threats from military personnel to “shoot all people” in their village if it was not evacuated (HumanRightsPapua, 3 February 2021).

In the Philippines, there was an uptick in fighting between the communist New People’s Army (NPA) and state forces. The clashes were also deadlier than the week prior, with at least 12 fatalities – including nine NPA members – reported last week. This comes as the controversial 2020 Anti-Terrorism Act comes under scrutiny at the Supreme Court. On 2 February, the first session of oral arguments was held, where 37 petitions by civil society groups against the law were presented (The Diplomat, 4 February 2021). The Duterte administration has insisted that the passage of the law was necessary in order to curb the communist insurgency, which the president claims is the biggest security threat to the country (Philippine Daily Inquirer, 23 June 2020). However, critics of the law, including activists and human rights groups, condemn it as a tool to restrict dissent and free speech, as its definition of “terrorism” is overly broad, and it contains clauses that allow law enforcement to carry out warrantless arrests on grounds of suspicion. Concerns about red-tagging – the labelling of individuals and organizations as communist – becoming even more deadly in the Philippines have also sparked opposition to the law. As the legal challenges against the law were brought forward last week, people gathered outside the Supreme Court to protest both for and against it.