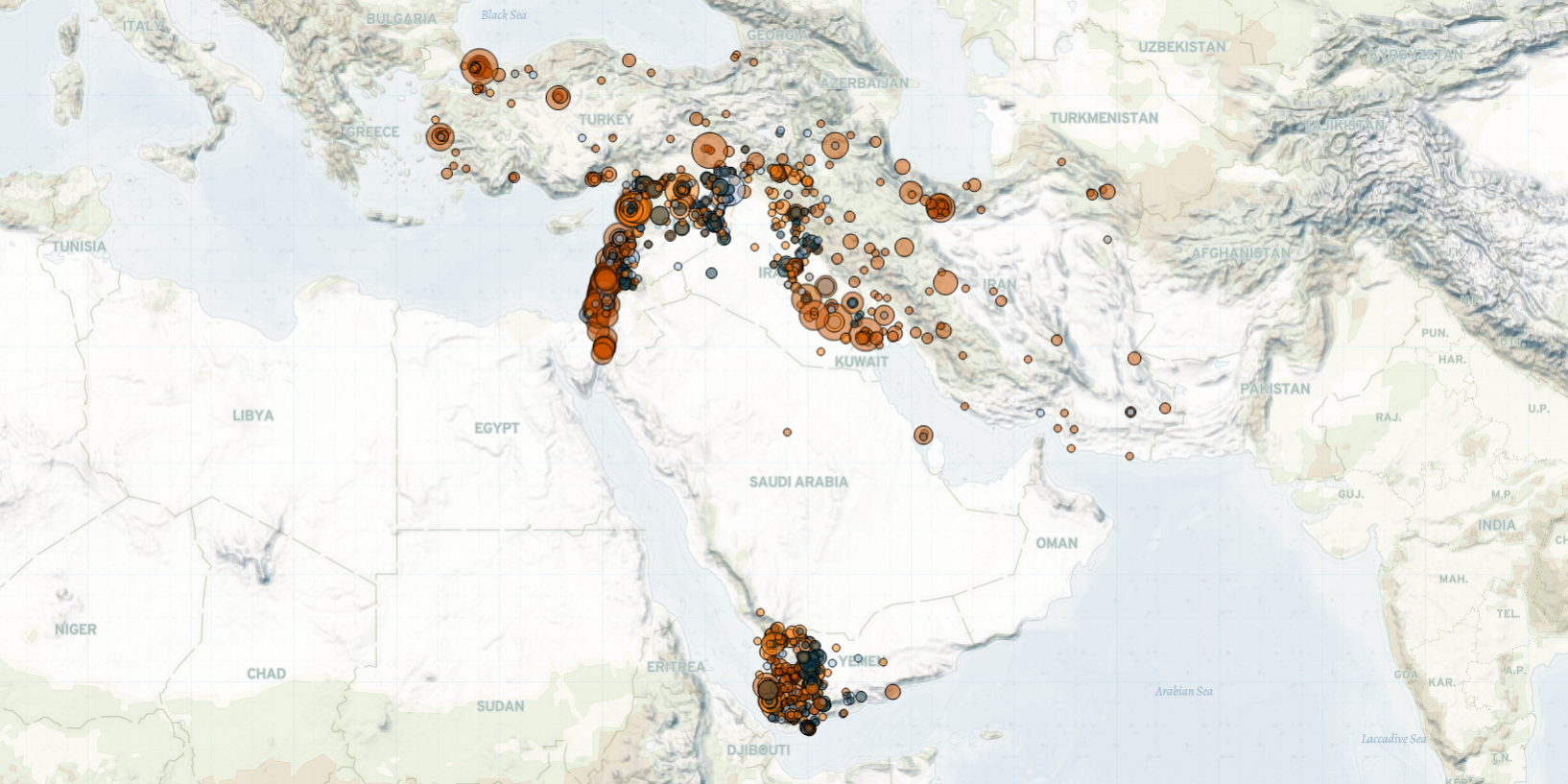 Last week in the Middle East, a major offensive was launched by Houthis in Marib in Yemen, while they also attacked Saudi Arabia’s Asir governorate with drones and missiles. In Syria,  Russian forces targeted the oil refineries in Terhin, while regime forces and their allies clashed with the Turkistan Islamic Party (TIP), as well as with Jaysh Al Nasr. In the meantime,  regime forces reached an agreement with the reconciliation committee in Tafas. In northern Iraq, the Turkish military launched an operation against the Kurdistan Workers Party (PKK) in the Gara Mountain region. Anti-government demonstrations were staged in Iraq, Lebanon, and Turkey.

In Yemen, pro-Houthi forces launched a major offensive targeting Marib city, which is held by pro-Hadi military forces. Offensive military operations predominantly occurred in the Sirwah district; however, a significant number of clashes also occurred in the Marib’s Medghal and Jabal Murad districts and in Al Jawf’s Khabb wa ash Shaaf and Al Hazm districts. The military operations were accompanied by a series of missile strikes on Marib city (Mareb Press, 7 February 2021; Al Harf 28, 9 February 2021) and the deployment of bomb-laden drones (Mareb Press, 7 February 2021). In an effort to stem the advance of pro-Houthi forces, the Saudi-led coalition conducted a significant number of airstrikes across the Sirwah (Ansar Allah, 10 February 2021; Ansar Allah, 11 February 2021). Pro-Hadi military forces redeployed from the Shabwa, Abyan, and Hadramawt governorates to reinforce positions in Marib (Aden al Ghad, 11 February 2021).

In northwest Syria, clashes took place between regime and pro-regime militia forces against the TIP on Ankawi and Al Hallubah fronts following an attack by the former. No advances were made in the clashes, which led to the killing of five regime and pro-regime fighters and three TIP fighters. Meanwhile, Jaysh Al Nasr launched an attack against the regime forces on Al Fatatra front, leading to several regime fatalities. Separately, Russian forces based at Hmeimim airbase targeted the oil refineries in Terhin in the northern countryside of Aleppo with surface-to-surface missiles, killing five people and wounding four others. The strikes caused fires and extensive damage to civilian properties. Meanwhile, an IED reportedly planted by Al Tali’a Al Muqatilah (Fighting Vanguard) on the M4 highway in Idleb went off targeting a Turkish military vehicle. No casualties were reported.

In southern Syria, regime forces and the regime’s 4th Armored Division reached an agreement with the local reconciliation committee in Tafas in the countryside of Dar’a on 8 February under the supervision of Russian forces. According to the agreement, the 4th Armored Division will not carry out a military operation in the western countryside of Dar’a and will not displace six former opposition commanders to the Syrian north. In exchange, former opposition fighters shall withdraw from governmental headquarters, and government buildings and institutions will reopen.

In northern Iraq, Turkish forces launched an operation dubbed ‘Claw-Tiger 2’ targeting the PKK in the Gara Mountain region (Chiya-e Gara) in Dahuk on 10 February. A number of Turkish troops were reportedly air-dropped via helicopters while accompanying airstrikes hit several PKK targets in the area. On 11 February, PKK militants attacked Turkish army helicopters attempting to air-drop more troops in the area. Turkish helicopters were reportedly forced to retreat due to the heavy PKK fire (Basnews, 10 February 2021). Turkish officials said on 14 February that the PKK allegedly executed 13 kidnapped Turks, including military and police personnel, already at the start of the operations. According to Turkish Defence Minister Hulusi Akar, the victims’ bodies were found in a hideout which was captured by Turkish troops during the offensive (Al Jazeera, 14 February 2021; Reuters, 14 February 2021). The PKK, on the other hand, claims that a Turkish airstrike targeted the detention cell in which the prisoners were being held (Morning Star, 15 February 2021).

In eastern Iraq, hundreds of rioters blocked Al Najeed street and the governor’s office building in Kut city with burning tires. The rioters demand the dismissal of the local government and governor and call for accountability for those who killed protesters in the city. The rioters clashed with police using Molotov cocktails, small arms, and knives. The violence in Kut led to 150 people injured, including rioters, police, security guards, and municipal employees. Wasit Police Directorate arrested an individual carrying a gun, as a bullet from their weapon killed at least one rioter, claiming he was an infiltrator who intended to target police. An unspecified number of rioters were also arrested (Al Mirbad, 2 February 2021).

In Lebanon, several demonstrations were held demanding the release of anti-government activists detained following riots in Tripoli last month. In Beirut, demonstrations turned violent on four days as security forces clashed with demonstrators who attempted to block roads and hurled rocks. Over 30 demonstrators were arrested on riot charges in the wake of the unrest in Tripoli, including for torching the municipality building (The961, 4 February 2021). The Tripoli Bar Association has filed a petition over infringement of the rights of the detainees, including denying the presence of their lawyers, and for their “unjustified arrests” (The961, 10 February 2021).

Lastly, in Turkey, demonstrations against President Recep Tayyip Erdogan’s appointment of an academic with ties to the ruling party as rector of Istanbul’s Bogazici University continued for the sixth consecutive week. While academics have held daily protests on the university campus, at least 10 other demonstration events have been held across the country in solidarity with the Bogazici demonstrators. Police intervened in seven of these events, using tear gas and detaining a number of demonstrators. Over 600 people have been arrested in connection with Bogazici University demonstrations since 4 January — some were detained following raids of their homes (Reuters, 7 February 2021). Although most have been released, at least 11 have been jailed or put under house arrest, pending trial (Ahval, 10 February 2020). In Istanbul’s Kartal district, a ban was announced on 8 February on all demonstrations for one week after calls by various political groups to demonstrate outside the Istanbul Anadolu courthouse. Amid Erdogan’s announcement of the establishment of two new departments at the university — a move the demonstrators see as an attempt to cement his efforts to appoint government loyalists (Foreign Policy, 9 February 2021) — demonstrations are likely to continue