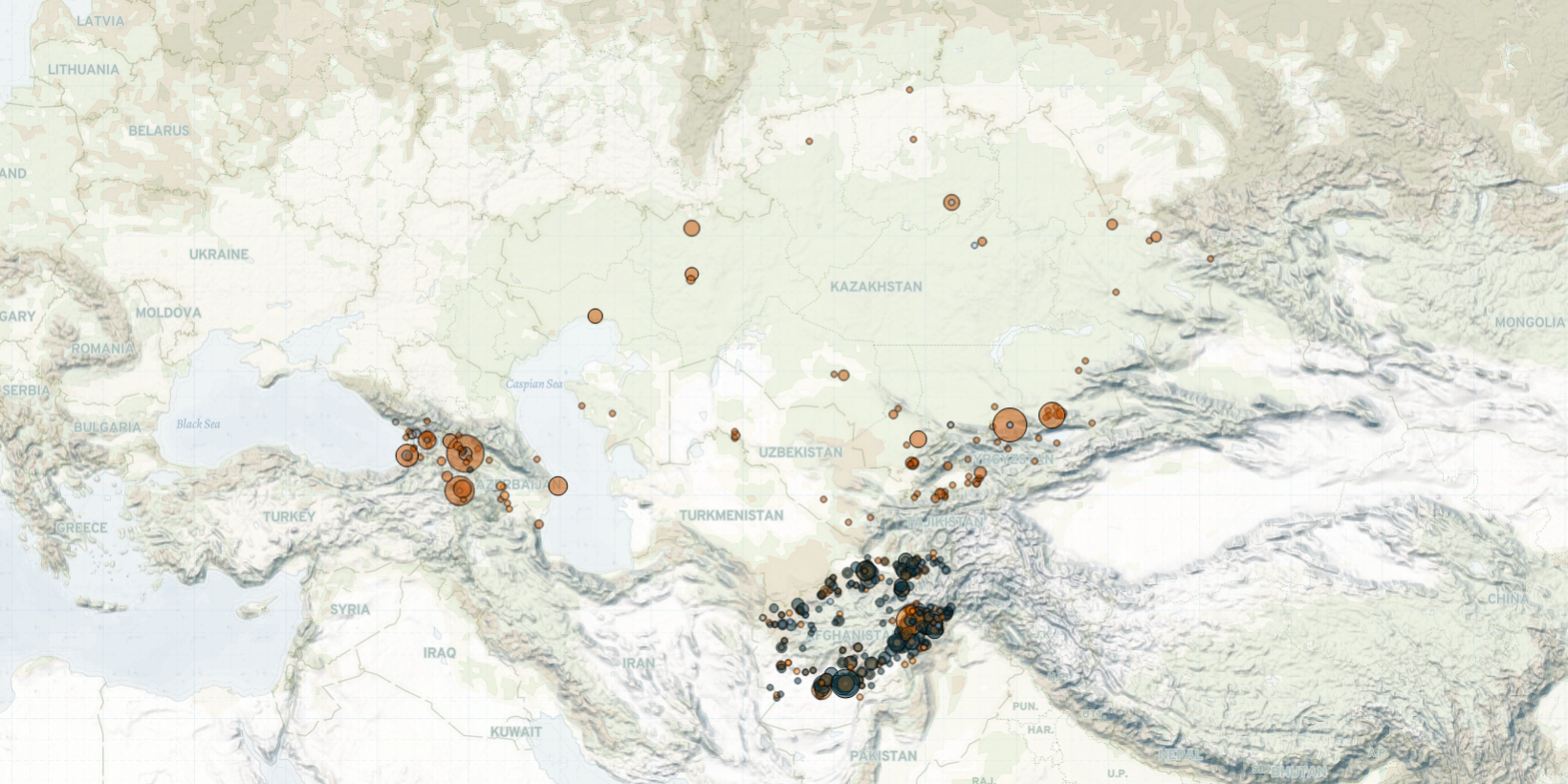 Last week in Central Asia and the Caucasus, violence continued in Afghanistan with lethal offensives between Afghan forces and the Taliban, while the Islamic State (IS) also conducted attacks in its previous stronghold of Nangarhar province. In the de facto Republic of Artsakh, landmines remaining from the latest war again caused casualties. In Azerbaijan, women protested, demanding all political prisoners be released and condemning oppressive policies towards the opposition. In Georgia, the arrest of a prominent opposition leader sparked opposition protests and resulted in the prime minister’s resignation. In Kyrgyzstan, anti-corruption demonstrations took place after a former public official’s lenient court sentence due to corruption. Lastly, demarcation efforts on the Uzbek-Kyrgyz-Tajik borders continued to exacerbate tensions among locals.

In Afghanistan, clashes and airstrikes between Afghan forces and the Taliban continued last week, with most of these attacks taking place in Kandahar, Balkh, Helmand, and Nangarhar provinces. Afghan forces made territorial gains in the Surobi district in Kabul province and Arghandab and Maywand districts in Kandahar province. Arghandab district has been an especially active battleground in February, with numerous air and ground operations carried out by Afghan forces. Another airstrike in the Nawa-e-Barakzayi district killed 16 Taliban and Al Qaeda militants. The Taliban has previously agreed to cut ties with Al Qaeda according to the deal signed with the US back in February 2020. However, such events continue to raise doubts about the Taliban’s commitment to the agreement (NBC News, 17 February 2021). Last week, Taliban insurgents carried out lethal attacks, both using remote explosives as well as through members infiltrating Afghan Security posts. A suicide attack also targeted police forces in Arghandab. Meanwhile, a training exercise gone wrong resulted in the deaths of 30 Taliban militants, who died during a training on making remote bombs in Dawlat Abad district in Balkh province. This incident resulted in the highest number of fatalities resulting from such an incident since 2019.

In a separate development, IS claimed four attacks against Afghan forces and government officials in Jalalabad city in Nangarhar province last week. They claimed to have killed 20 Afghan commandos in one of the attacks. Afghan intelligence responded with operations against IS in Nangarhar, killing eight militants in Jalalabad city. Nangarhar used to be a stronghold for IS, and the continuous attacks in the province signal that the group has been increasing its offensive capabilities (VOA, 9 February 2021). The persistent IS presence in Afghanistan is also a stark reminder of the risk it poses to peace, especially as the intra-Afghan talks have been in a stalemate thus far (Afghanistan Analysts Network, 14 February 2021). .

Along the Armenia-Artsakh-Azerbaijan Lines of Contact, one civilian was killed by an anti-tank landmine explosion in the Azerbaijani-controlled part of the de facto Artsakh Republic. The incident adds to the rising number of remnant landmine victims in the region following the 2020 Nagorno-Karabakh (Artsakh) war. (For further information about the 2020 Nagorno-Karabakh war, see ACLED’s Ten Conflict to Worry About in 2021 series).

In Azerbaijan, women, including the wives of detained journalists and members of the opposition Popular Front Party of Azerbaijan, demonstrated in Baku, demanding that all political prisoners be released. Law enforcers intervened and detained two demonstrators. At the same time, five local activists of another opposition party, the Musavat Party, were detained by police in the Surakhani district of Baku during one of their meetings (Meydan TV, 15 February 2021). The reason for the arrests was presented as violating quarantine rules; however, Azerbaijani authorities have previously been criticized for using the pandemic as a pretext to increase repression against the opposition (IWPR, 12 August 2020).

In Georgia, a court ruling to place the head of the United National Movement (UNM), Nika Melia, in pre-trial detention sparked demonstrations last week. Melia was accused of organizing the mass demonstration on 20 June 2019, when a group attempted to storm Parliament during the visit of a Russian lawmaker (RFE/RL, 17 February 2021). The main opposition force in the country, UNM, denounced the decision as politically motivated and demonstrated in front of Parliament, resulting in clashes with police and 20 arrests. The ruling also led to Georgian Prime Minister Giorgi Gakharia unexpectedly announcing his resignation, citing his disagreement with his party over Melia’s arrest (Reuters, 18 February 2021). The unrest continues into this week as Melia was arrested on 23 February during a police raid on UNM headquarters (BBC, 23 February 2021).

In Kyrgyzstan, activists demonstrated in Bishkek city, demanding anti-graft reforms and investigating corruption allegations in the country’s customs agency. The protest was triggered by a court ruling the week prior, ordering a mitigated sentence for a former customs officer, Raimbek Matraimov. The decision was seen as a lenient sentence, triggering a mass protest in Bishkek. Matraimov belongs to a renowned wealthy family in Kyrgyzstan that holds critical public functions and is frequently associated with corruption (OCCRP, 2 October 2020). The reactions to his sentence caused Kyrgyz authorities to rearrest Matraimov, sparking protests held by his supporters in Bishkek and Kara-Suu this time, demanding his release.

Lastly, border issues continue to spark tensions among residents along the Kyrgyzstan-Tajikistan-Uzbekistan borders. Locals gathered in the border area in Kyrgyzstan’s Batken region, Jalalabad region, as well as in Bishkek city last week. They called for the resolution of the border disputes with neighboring Tajikistan and Uzbekistan following demarcation activities on the borders with both countries. The border demarcation has long been endeavored in the Ferghana valley, where these three countries’ borders converge and most riots occur. However, as locals are mostly concerned with their share of arable and pasture lands, the demarcation activity further triggered discontent that is likely to continue until its completion (RFE/RL, 21 February 2020). (For further information about demonstration drivers in Central Asia, see ACLED’s joint piece with Oxus Society for Central Asian Affairs, Understanding Disorder in Central Asia).