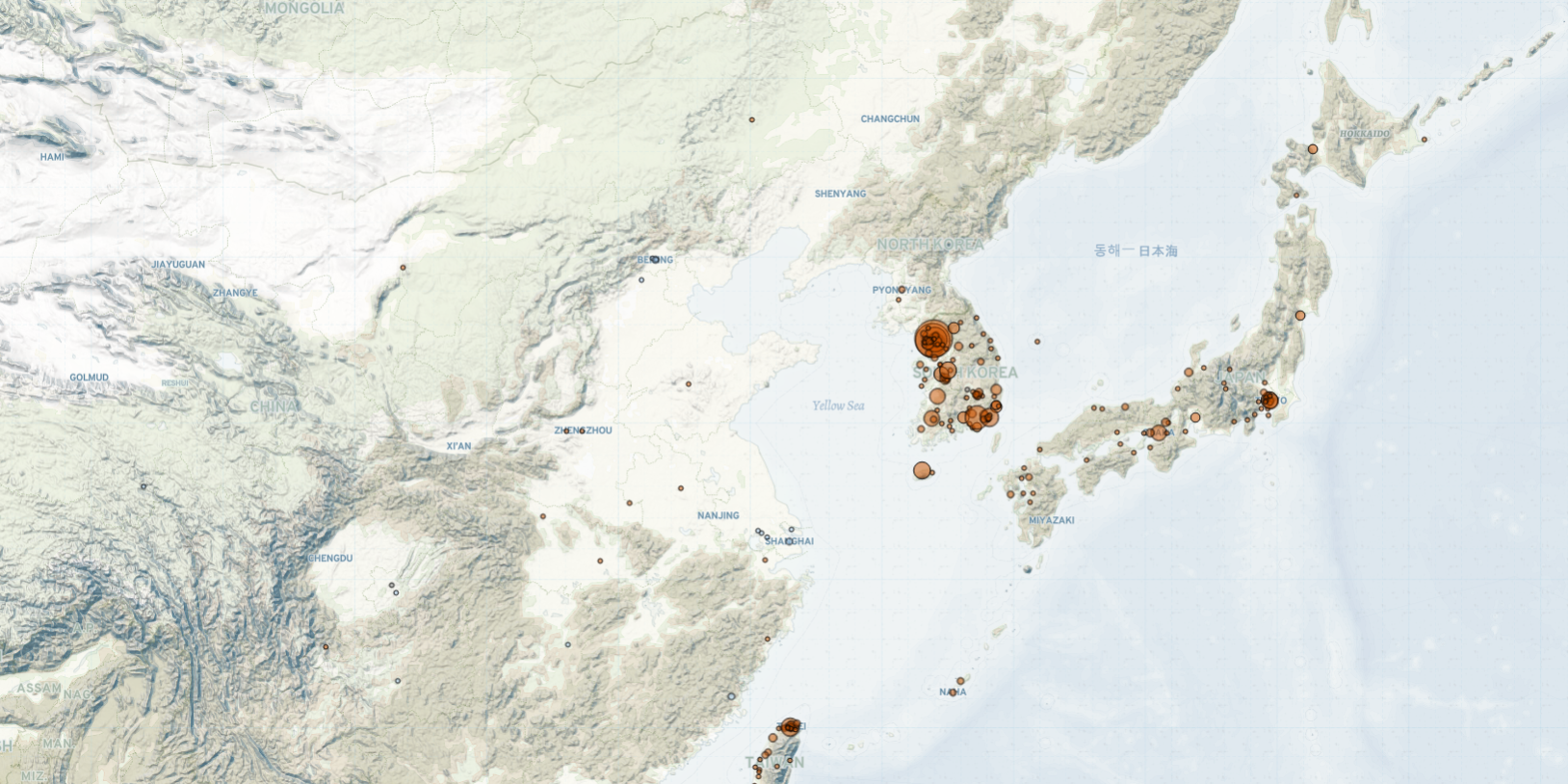 Last week in East Asia, authorities in Hong Kong detained and charged 47 pro-democracy politicians and activists under the National Security Law for organizing and participating in last July’s primary elections for pro-democracy parties. Students from Taiwan and Hong Kong staged a protest in front of the Legislative Yuan in Taipei, asking the government to take concrete action to protect political dissidents from Hong Kong. Solidarity demonstrations against the military coup in Myanmar were held on 28 February in Hong Kong, Taiwan, South Korea, and Japan amid increased tensions between demonstrators and state forces in Myanmar. Protests related to ‘March 1 Independence Movement Day,’ which marks the beginning of the 1919 Korean uprising against Japanese colonial rule, were reported in South Korea and Japan. On the day of the uprising commemoration, the South Korean president held a speech suggesting that his administration might be willing to put historical issues between South Korea and Japan to rest. Lastly, in South Korea, the death of a transgender soldier who was forced to leave the army triggered a series of anti-discrimination protests.

In Hong Kong, police charged 47 pro-democracy politicians and activists under the National Security Law for their involvement and participation in a primary election for the now-postponed Legislative Council election in July last year (HKFP, 28 February 2021). While they were originally scheduled to report to police on 8 April, all of them have now been denied bail and have been detained. They have appeared in court for their trial, which began on Monday. These developments sparked the biggest pro-democracy demonstrations in Hong Kong since the passing of the National Security Law; about 1,000 citizens disregarded social distancing measures to gather outside the court to demand their release throughout the days-long trial (The Guardian, 1 March 2021). Critics view the developments as an assault on Hong Kong’s democratic freedoms and space for meaningful political participation (HKFP, 4 March 2021; The Guardian, 5 March 2021). The unexpected detentions were announced amid high-level symposia in Beijing and Shenzhen about electoral reform in Hong Kong. At these events, Chinese officials emphasized the importance of “patriots” governing the institutions of power (SCMP, 25 February 2021). It was also reported that changes to Hong Kong’s electoral system that “could further neuter opposition” are expected to be introduced at the annual parliamentary meetings — also known as the Lianghui or Two Sessions — which opened in Beijing on 4 March (HKFP, 3 March 2021).

In Taiwan, students from Hong Kong and Taiwan protested outside Legislative Yuan, calling for the Taiwanese government to take concrete steps to protect Hong Kong political dissidents (Focus Taiwan, 2 March 2021). The protest comes after Hong Kong authorities charged dozens of pro-democracy figures under the new Chinese National Security Law. The Taiwanese government can legally provide ‘necessary assistance’ to people of Hong Kong or Macau facing political persecution (Focus Taiwan, 2 March 2021). However, the current Taiwanese legislation does not detail how the help should be provided, which raises concerns over how political dissidents can actually seek assistance.

Solidarity demonstrations against the military coup in Myanmar continued last week across East Asia. In Taiwan, around 300 Taiwanese and Burmese students protested in Taipei, denouncing the military coup in Myanmar and calling for a return to democracy (Liberty Times, 28 February 2021). The protesters showed solidarity with their counterparts in Myanmar as part of the ‘Milk Tea Alliance’ movement on 28 February. The Milk Tea Alliance is a transnational online network and also a hashtag that enables demonstrators — mainly from Taiwan, Hong Kong, Thailand, and Myanmar — to share protest tactics and to show support for democratization (Taiwan News, 2 March 2021). Similarly, in Hong Kong, Myanmar nationals and Hong Kong residents held a protest at the top of Victoria Peak to express their solidarity. In South Korea, Myanmar nationals, and Korean supporters, rallied in Seoul and Daejeon to protest against the military coup, seeking Korea’s support for democratization in Myanmar (Korea JoongAng Daily, 1 March 2021; Yonhap News Agency, 1 March 2021). In a noteworthy move, Myanmar nationals staged a protest in front of the Russian Embassy in Seoul to denounce the Russian government for allegedly supporting the coup in Myanmar after calling it “a domestic affair” during a UN General Assembly meeting (Yonhap News Agency, 28 February 2021). In Japan, large rallies were held across the country. Myanmar nationals, including students, alongside Japanese supporters, marched to show solidarity with the people of Myanmar and mourned the Myanmar protesters who have been killed during demonstrations against the coup (Okinawa Times, 1 March 2021).

In South Korea, various groups held rallies on ‘March 1 Independence Movement Day’ — a holiday marking the first nationwide political protest on 1 March 1919 for Korean national independence under Japanese colonial rule. Some far-right groups positioned themselves throughout Seoul to circumvent coronavirus restrictions and held a series of anti-government rallies to denounce the current administration (The Korea Herald, 1 March 2021). Liberal groups, meanwhile, picketed in Seoul to urge the Japanese government to apologize for the forced labor and sexual slavery committed by the military during Japanese colonial rule (Yonhap News Agency, 1 March 2021). On the same symbolic day, Korean President Moon Jae-in stated that his administration “is ready to sit down and have talks with the Japanese government anytime” (The Korea Herald, 1 March 2021). His speech, seen by some as a possible diplomatic turning point, is a departure from the usual harsh condemnation of Japan’s war crimes during colonial rule (Geopolitical Futures, 1 March 2021; The Straits Times, 1 March 2021).

In response to the Korean president’s forward-looking friendly gesture, the Japanese government expressed hope for South Korea’s concrete proposals to resolve issues between the two countries (Nikkei Asia, 1 March 2021). The stalemate between the two countries has continued since a ruling in 2018 ordered Japanese companies to compensate groups of South Koreans for forced labor during Japan’s colonial rule. This new development can be seen as a step towards a possible resolution of the issue.

Protests related to the ‘March 1 Independence Movement Day’ were also held in Japan. Protesters gathered in Tokyo to commemorate the event and to condemn discrimination (National Union of General Workers Tokyo Nambu, 1 March 2021). Additionally, citizens protested in Otsu city to criticize their prefectural government over their public opposition to a Seoul Central District Court ruling. The ruling requires the Japanese government to pay compensation to 12 Korean women over their wartime suffering as ‘comfort women’ — women who were forced to work in Japan’s wartime brothels. The protesters argue that further discussion is required to pass judgment regarding the ruling (Kyoto Shimbun, 5 March 2021).

Lastly, in South Korea, the death of the first openly-transgender soldier, who was discharged after having gender confirmation surgery, ushered in a series of protests led by human rights groups. After her surgery, she was forced to leave the army following a decision that found her “physically disabled to serve the army” (The New York Times, 3 March 2021). Protesters asked authorities to enact an anti-discrimination law and to promote the rights of sexual minorities (Hankyoreh, 5 March 2021; News1, 5 March 2021). This development might lead to further protests related to the anti-discrimination law, as the issue has continuously been a subject of debate between conservative and progressive groups in the country.