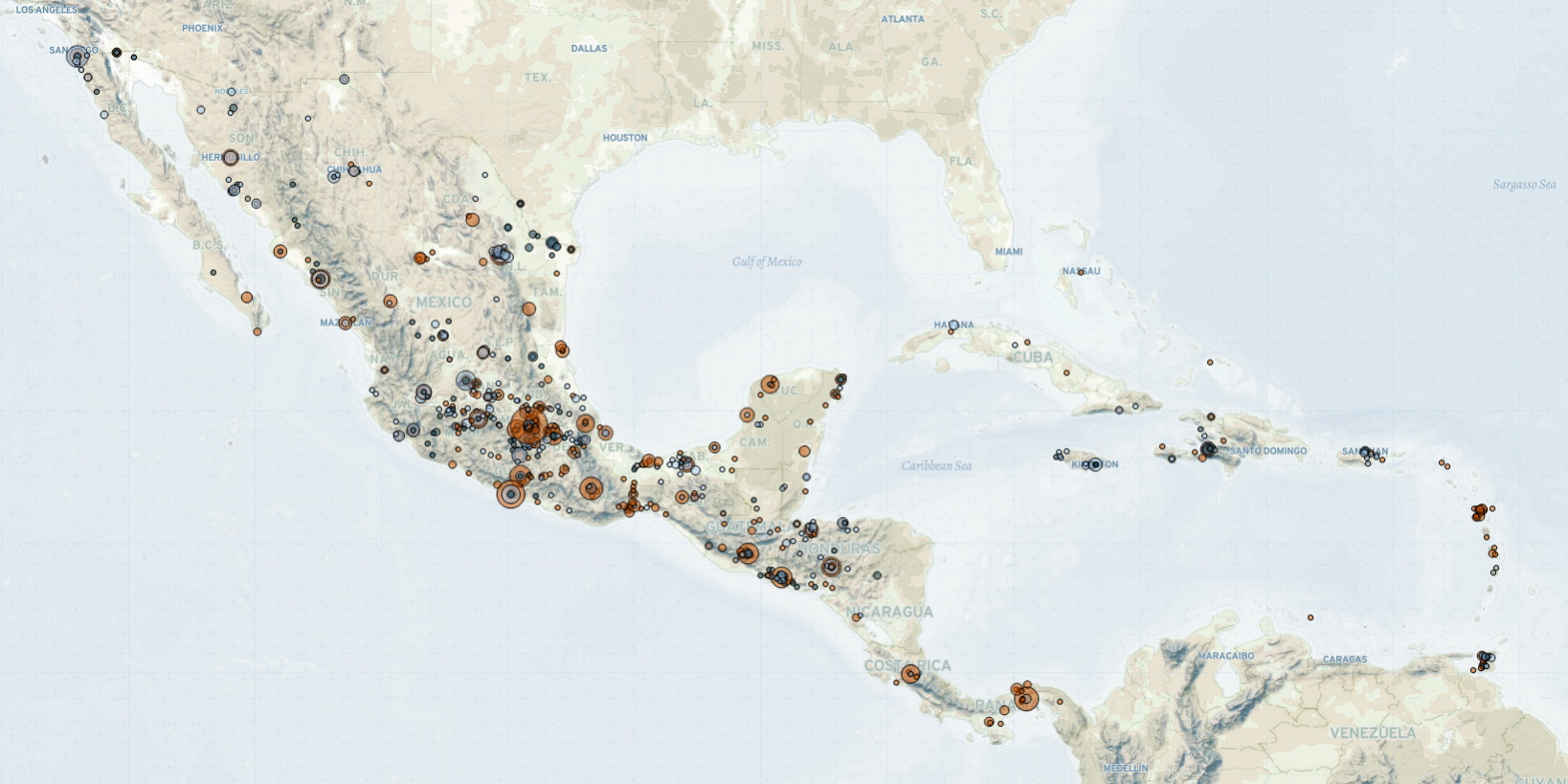 Last week in Mexico, Central America, and the Caribbean, gang violence remained high. In Mexico and Haiti, several police officers were killed in clashes with gangs. In Haiti, the deaths of at least six police officers led to demonstrations throughout the country. As part of these demonstrations, police officers of the dissident Phantom 509 faction took over two police stations. They released at least four police officers that were previously detained by law enforcement on alleged political grounds. Elsewhere, the upcoming elections in Honduras and Mexico continue to spark protests and violence. In Honduras, supporters of parties running in the primary elections protested against alleged electoral fraud. In Mexico, two mayoral candidates of the National Regeneration Movement (MORENA) were attacked by armed men; one of the victims died.

In Mexico, clashes between gangs and police forces intensified last week. On 18 March, at least 17 police officers were killed in the state of Mexico in two different ambushes perpetrated by members of La Familia Michoacana. This cartel controls the southern municipalities of the state of Mexico that connect with the neighboring states of Michoacan and Guerrero. The area, also known as Tierra Caliente, is a hotspot of criminal activities such as drug trafficking, extortion, and illegal logging activities (El Pais, 2 March 2021). As part of La Familia Michoacana’s effort to maintain control over its territory and to avoid the expansion of the Jalisco New Generation Cartel (CJNG) (El Universal, 13 March 2021), the cartel has been waging a war against police forces. The ambushes were allegedly organized in response to police operations to deter La Familia Michoacana and its operation (Infobae, 18 March 2021). According to state forces, La Familia Michoacana operates in 55 out of 125 municipalities of Mexico (Animal Politico, 24 September 2020).

In Haiti, the deaths of police officers during an anti-gang operation in Port-au-Prince sparked unrest throughout the country last week. On 12 March, at least six officers were killed in a clash with gang members. The police were attempting to deter gangs controlling the Village de Dieu neighborhood in the capital. This neighborhood has been controlled by several gangs and has become a no-go zone for authorities. Gang members published videos on social media in which they displayed and humiliated the bodies of the police officers who had died in the clashes (VOA, 13 March 2021).

Following this event, locals and members of the dissident police faction Phantom 509 demonstrated, demanding the recovery of the officers’ bodies. Phantom 509 is a faction of the Haitian police force that formed around labor demands. They participated in violent demonstrations in 2020 over poor police equipment and low salaries (Haiti Libre, 15 September 2020). Although the government announced that funding for police would be raised, police forces are outgunned by gangs (Reuters, 15 March 2021; Le Nouvelliste, 6 June 2020). Currently, the Hatian Police Force counts on about 14,900 officers to guarantee the protection of around 11 million habitants, amid soaring gang violence (Miami Herald, 17 March 2021).

Police officers, including Phantom 509, and civil society organizations have held the government and the police chain of command responsible for the failure of the security operation. They accuse the leadership of under-estimating the risk of the operation and relying on erroneous intelligence (VOA, 19 March 2021;, Le Nouvellist, 16 March 2021). As a part of the demonstrations last week, members of Phantom 509 broke into two police stations and released four police officers who were jailed on the premises. All four police officers were allegedly imprisoned for political reasons (US News, 17 March 2021). One of the released officers had been jailed for shooting a gang member who had ties to a political leader. Other rioting police officers claim that the released officers were arrested for allegedly trying to overthrow president Jovenel Moise during anti-government demonstrations on 7 February (StartTribune, 17 March 2021). Demonstrators further decried the jailing of a police inspector shortly after the operation. They fear the government is planning to silence the inspector to avoid the leaking of information on the raid (VOA, 19 March 2021).

In response to the failed anti-gang operation, the president declared a state of emergency, allowing him to restrict freedom of movement and communication in certain areas (RFI, 19 March 2021). This raises concerns that the government might be taking an authoritarian turn. The president has been ruling by presidential decree since February 2020, amid allegations of collusion between political elites and gangs. (For more on increased gang violence amid rising authoritarianism in Haiti, see ACLED’s 10 conflicts to worry about in 2021 series).

In Honduras, accusations of fraud during the primary elections triggered protests in the capital of Tegucigalpa. On 14 March, primary elections were held to elect presidential and congressional candidates running for the National Party of Honduras, the Liberal Party of Honduras, and the Liberty and Refoundation Party. Following the announcement that results would be delayed, candidates of the three parties denounced fraud in the vote-counting process, calling on their supporters to protest (Associated Press, 17 March 2021; La Prensa, 17 March 2021). The National Electoral Council, the institution in charge of organizing elections, has opened investigations into over 1,000 ballots on suspected fraud (Swissinfo.ch, 21 March 2021). This event further weakens the population’s trust in the electoral process. The primary elections have been taking place amid the controversial revelations of a gang member linking several politicians and former presidents to gangs, corruption, and money-laundering schemes (Associated Press, 15 March 2021).

In Mexico, candidates running in the upcoming federal election scheduled for 6 June continue to be the targets of violence. In the municipality of Chilon, Chiapas, a mayoral candidate, his son, and another person were killed by armed men who shot and set the candidate’s vehicle on fire. The victim was a candidate of MORENA, a party that has gathered the most support in pre-election polls (El Pais, 21 March 2021). Local authorities argue that the candidate might have been killed for denouncing corruption involving the current mayor of Chilon, affiliated with the rival Institutional Revolutionary Party (El Universal, 17 March 2021; La Jornada, 18 March 2021).

Further, another MORENA mayoral candidate running in the municipality of Nacajuca, Tabasco, was injured in an attack perpetrated by three armed men. The day before the attack, the candidate was part of an internal party dispute (Milenio, 18 March 2021). Local MORENA supporters have protested in recent weeks against the imposition of ‘parachute candidates’ by the national party structure (Infobae, 3 January 2021), which refers to when national party authorities have sent candidates to run in local municipalities in which they are not living. In 2021, ACLED records at least 30 demonstrations organized by members of MORENA in 14 different states against the party’s internal candidate selection process.