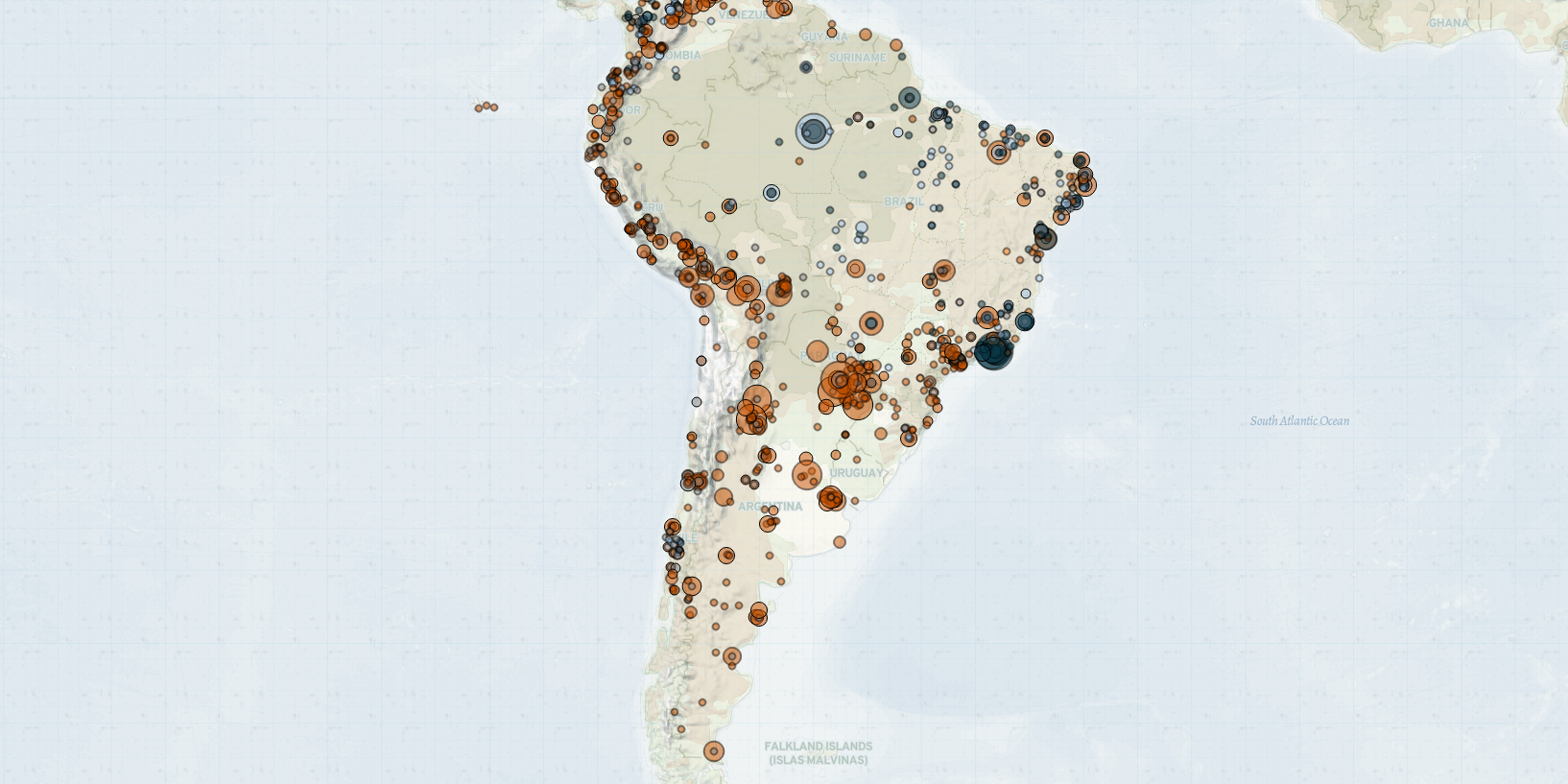 Last week in South America, demonstrations increased compared to the previous week. Anti-government demonstrations continue to take place in Paraguay, while thousands protested in Bolivia following the arrest of former interim President Janine Áñez (Bolivia.com 16 March 2021). In Peru, demonstrations were reported across the country as transport workers went on strike to demand a decrease in gasoline and toll prices. In Colombia, demonstrations continued for the second consecutive week against the government’s decision to resume aerial fumigation of coca fields. Meanwhile, in Brazil, armed clashes remained at similar levels compared to the previous week. Protests against lockdown measures continue to be held in the country amid an increase in the coronavirus death rate.

In Paraguay, anti-government demonstrations continued for the second consecutive week. Citizens took to the streets to call for the impeachment of President Mario Abdo Benítez and Vice President Hugo Velázquez, due to their mishandling of the pandemic. Demonstrators claim that the response to the coronavirus health crisis has been aggravated by widespread government corruption. On 17 March, demonstrators broke into the building of the National Republican Association (Colorado Party) — the party of the president — and set fire to it. At least 27 people were arrested and several others were injured (ABC, 18 March 2021). Indigenous people also took part in several of the demonstrations across the country, demanding the resignation of employees and the president of the Paraguayan Indigenous Institute, accusing them of not providing assistance to indigenous people during the pandemic.

Demonstrations increased significantly in Bolivia last week compared to the previous week. Thousands of people took to the streets after the former interim President Jeanine Áñez and other former government officials were arrested on charges of “terrorism and sedition” (Bolivia.com 16 March 2021; The Guardian, 14 March 2021). They were arrested on the grounds that they were part of a coup to remove former left-wing President Evo Morales from power in 2019. Supporters of Áñez claim the arrests are illegal and amount to political persecution since the current president, Luis Arce, is from Morales’ party, the Movement for Socialism (MAS). Meanwhile, MAS supporters also demonstrated in support of the arrests, claiming justice is being served.

In Peru, hundreds of transport workers went on strike and staged demonstrations by blocking highways across the country (Diario de Chimbote, 17 March 2021). Demonstrations increased by over fivefold last week compared to the previous week, with 150 events reported. The nationwide demonstrations were called by the National Union of Transport Workers of Peru (UNT) to demand gasoline and toll prices be reduced. While most of the demonstrations were peaceful, demonstrators set fire to tires and flattened the tires of drivers who did not join the strike on some highways. Demonstrators clashed with police in the provinces of Arequipa, Lima, Junin, and Puno. On 20 March, the UNT reached an agreement with the government and demonstrations were suspended (Andina, 20 March 2021).

In Colombia, tensions between rural communities and the government continue over the announcement of the resumption of aerial fumigation of coca crops with the herbicide glyphosate. Demonstrations were reported for the second consecutive week, with farmers, indigenous communities, and Afro-Colombian groups protesting in 10 municipalities of the Nariño department. Similarly, farmers and indigenous groups in the Cauca department demand that the government comply with the Peace Agreement of 2016, which includes the introduction of alternative livelihood programs for families who economically depend on illegal crops. Protesters blocked the Pan-American highway, which connects the south of the country with the capital city of Bogotá, in at least three areas (Vanguardia Liberal, 15 March 2021).

In Brazil, violence against civilians events decreased by a quarter last week compared to the previous week, while armed clashes remained at similar levels. In the North Zone of Rio de Janeiro city, civil police officers carried out an operation against drug trafficking in the Barbante community in Governador island, an area controlled by the Red Command (CV). A shooting broke out between the police and the CV, with three suspects dying. In June 2020, the Supreme Court of Justice prohibited police operations in the favelas of Rio de Janeiro, in an attempt to protect civilians quarantining in violence-affected communities. While the operations were initially suspended, police operations continue to take place on a weekly basis, putting civilians at an increased risk of being caught in the crossfire (DW, 12 March 2021).

Meanwhile, demonstrations increased by over two-thirds last week in Brazil compared to the previous week. Demonstrations against the enforcement of stricter municipal quarantine measures took place in several cities across the country. With the lack of financial assistance for small businesses, workers and business owners took to the streets calling for the reopening of non-essential activities. The government’s mishandling of the pandemic has also motivated protests calling for the resignation of President Jair Bolsonaro, as well as for mass coronavirus vaccinations. On 22 March, Brazil reached 295,000 deaths, with an average death toll of 2,200 deaths per day for the past seven days (G1, 22 March 2021). Public health experts have warned that the surge of new virus variants, coupled with the lack of effective measures put in place by the federal government, will further exacerbate the health crisis in the country and will pose a significant threat to the world (The Guardian, 3 March 2021; The Washington Post, 9 March 2021).