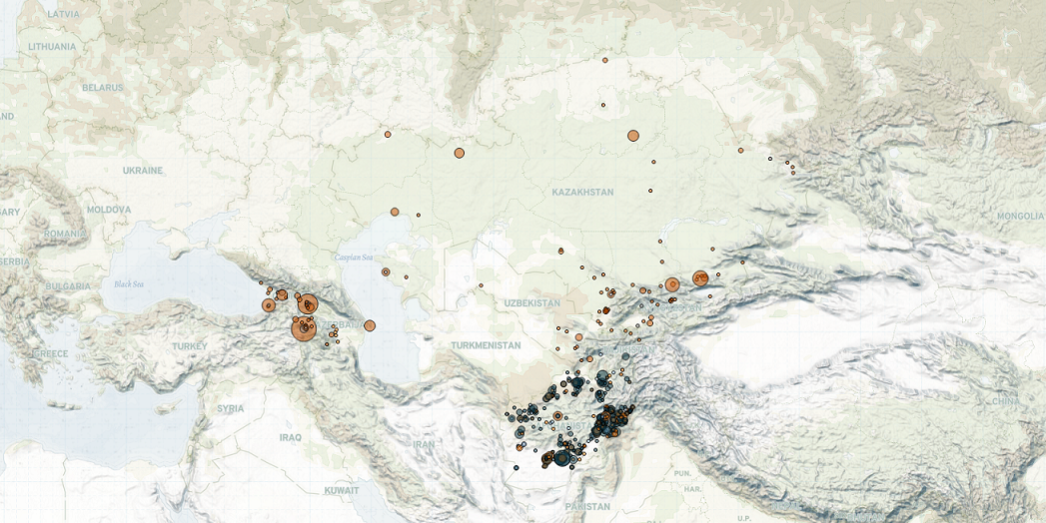 Last week in Central Asia and the Caucasus, violence continued between Afghan forces, the Taliban, and the Islamic State (IS). A protest against the night raids of the intelligence forces in Faryab province was also reported. In the de facto Republic of Artsakh, remnant landmines again inflicted casualties on civilians. In Armenia, the ongoing anti-government protests yielded the announcement of snap parliamentary elections. In Kazakhstan, the persecution of ethnic and religious minorities in the Xinjiang region of China continues to spark discontent among ethnic Kazakhs. In Kyrgyzstan, a protest by local villagers over a Russian-sponsored gold mine highlights both the potential environmental damage of mining projects and Russia’s political interest in the country.

In Afghanistan,1ACLED is currently conducting a review of sourcing and reporting of the conflict in Afghanistan since 2020. Afghan forces’ operations were mostly concentrated in Kandahar, Nangarhar, and Helmand provinces last week, with dozens of Taliban fatalities reported. Meanwhile, the Taliban targeted Afghan forces mainly in those same provinces as well as in Balkh province, where police forces were ambushed. The US has also launched a number of airstrikes against the Taliban in Kandahar province, the first of such attacks reported since 12 January 2021. Meanwhile, Afghan intelligence forces, the National Directorate of Security (NDS), continue their operations against IS militants in Nangarhar province, killing one bomb maker last week. NDS also conducted operations in Faryab province, arresting 15 people with links to IS (Pajhwok News, 15 March 2021). Locals held protests in the provincial capital of Maymana following these raids in which many people were arbitrarily arrested, claiming that they took place at midnight without the provincial attorney’s authorization.

Meanwhile, the Afghan government and the Taliban agreed “to accelerate peace talks” during a summit held in Moscow last week (Reuters, 19 March 2021). Despite this promise, no progress has been made on any specific issues, including a ceasefire. Following the summit, the Taliban reiterated its expectation of a US withdrawal by May. US President Joe Biden says that the withdrawal of troops from Afghanistan by 1 May will be “tough” (Al Jazeera, 19 March 2021). As the deadlock continues, another summit in Turkey has been confirmed for April (TOLO News, 20 April 2021).

Along the Armenia-Artsakh-Azerbaijan Lines of Contact, remnant landmines continue to cause casualties among Azerbaijani civilians. Two civilians died, and four others suffered injuries, after stepping on landmines in the Azerbaijani-controlled part of Aghdam and Khojavend regions of the de facto Artsakh Republic last week.

In Armenia, anti-government protests took place almost daily last week, demanding the resignation of Prime Minister Nikol Pashinyan. The protests have been ongoing since the agreement ending the 2020 Nagorno-Karabakh war was signed on 9 November 2020. The agreement has drawn negative reactions from the opposition due to Azerbaijan’s territorial gains. Nevertheless, there was a potential solution to the ongoing political crisis last week, as Pashinyan announced snap parliamentary elections to take place on 20 June 2021 (Civilnet, 18 March 2020). This decision received mixed reactions from the opposition — ranging from a willingness to participate to distrust towards the government’s ability to organize fair elections (AP, 18 March 2021). Previously, Pashinyan pledged to hold snap elections, but they were cancelled due to an alleged lack of demand among the general public (Eurasianet, 8 February 2021).

In Kazakhstan, relatives of ethnic Kazakhs imprisoned in China’s Xinjiang region continued demonstrations that have been ongoing since 8 February 2021. Protesters demand that Chinese authorities release their family members from the facilities in China officially known as reeducation camps (BBC, 15 January 2020). Meanwhile, an activist who has been organizing solo protests in Nur-Sultan reports that he was threatened by Kazakh authorities last month while under custody. The authorities warned him that “his heart might stop” if he does not end his actions (RFE/RL, 18 March 2021). Previously, several other activists had claimed to have experienced similar pressure by authorities on the same grounds (FT, 27 December 2020). This highlights Kazakhstan’s difficult balance between anti-China sentiment and reluctance to harm its relations with its major investor in the country’s economy (The Asan Forum, 23 October 2020).

In Kyrgyzstan, a protest was organized in the village of Kara-Oy of the Talas region, demanding that the Kyrgyz President Sadyr Japarov address villagers’ concerns over the environmental impact of the Jerooy gold mine in the region. The protest was triggered by the official launch of the mine on the same day following an agreement between Russian President Vladimir Putin and Japarov, outlining Russian investment in the project (RFE/RL, 17 March 2021). The mine was scheduled to start operations last year, but this was postponed due to post-election unrest. (For further information about demonstration drivers in Central Asia, see ACLED’s joint piece with Oxus Society for Central Asian Affairs, Understanding Disorder in Central Asia). Russia’s economic aid is significant to its policy of retaining influence in Kyrgyzstan, which is increasingly contested by China’s massive infrastructure projects in the country (The Jamestown Foundation, 8 April 2019).