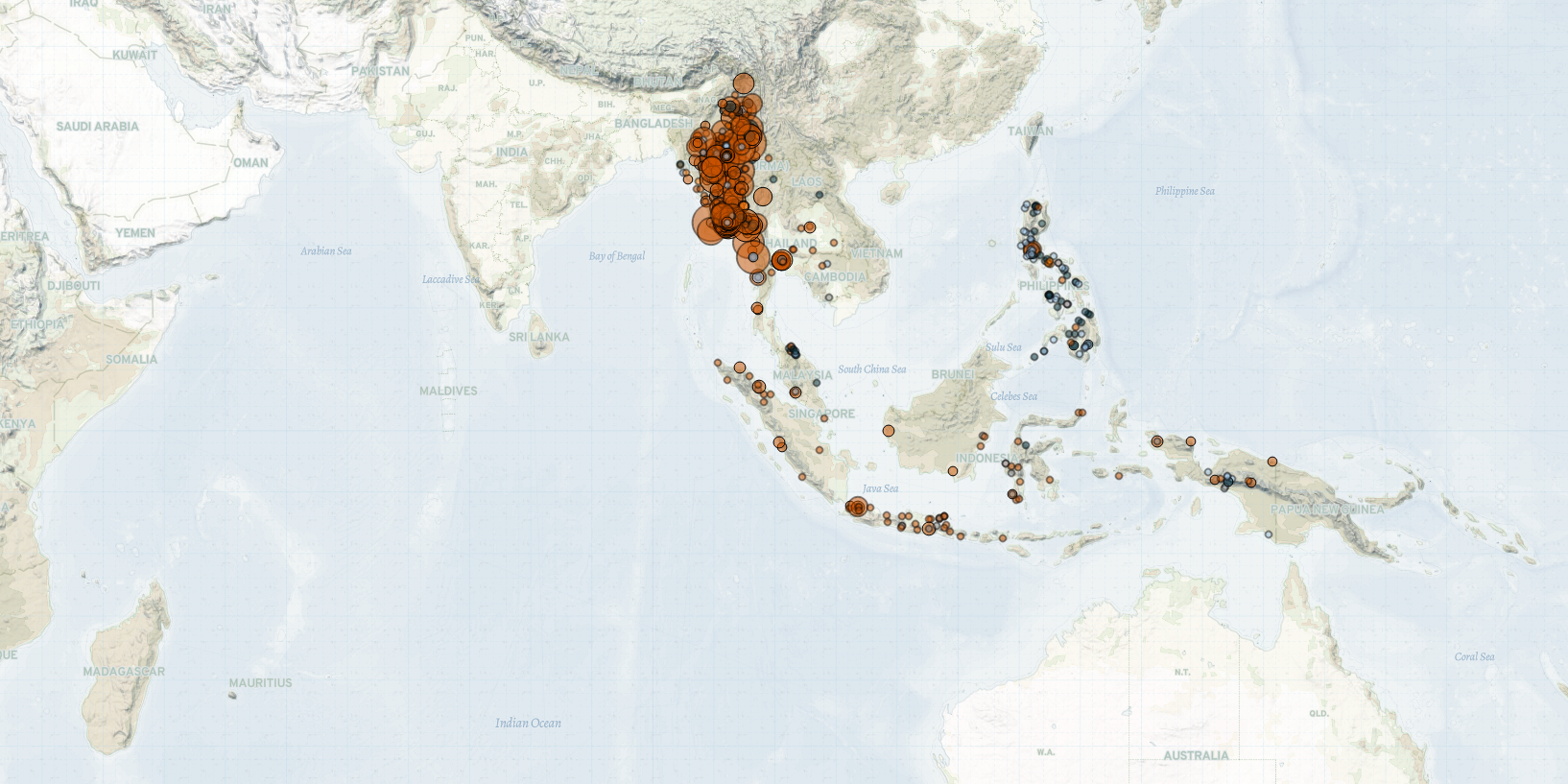 Last week in Southeast Asia, security forces in Myanmar intensified their efforts to quell anti-coup demonstrations. A particularly harsh crackdown took place on 14 March in Yangon, resulting in the deadliest day of violence since the 1 February coup. Amid rising anti-China sentiment, there were also reports of Chinese-financed factories being set ablaze with the military and demonstrators trading blame for the fires. Meanwhile, fighting between rebel groups and the military increased in both Myanmar and the Philippines. In Kachin state, Myanmar, clashes between ethnic Kachin rebels and the Myanmar military intensified amid rising public support for the insurgent group. In the Philippines, the uptick in fighting comes as the anniversary of the founding of the communist New People’s Army (NPA) approaches. Elsewhere, demonstrations were reported in Indonesia, Malaysia, and Thailand. Protests calling for increased Papuan autonomy continued in Indonesia. In both Malaysia and Indonesia, environmental groups called on their governments to declare a climate emergency. Lastly, anti-government protests continued in Thailand as protest leaders continue to be held without bail.

In Myanmar, the military junta intensified its efforts to quell the ongoing anti-coup demonstrations, with heavy deployment of security forces, notably in the country’s largest city of Yangon (VOA, 19 March 2021). On 14 March, security forces launched a large-scale crackdown on demonstrations. This  resulted in the deaths of over 80 people in Yangon, including at least 49 people in the industrial suburb of Hlaingthayar township, according to figures tallied by the Assistance Association of Political Prisoners (AAPP, 19 March 2021; Guardian, 17 March 2021). This marks the deadliest day of violence since the coup began on 1 February.

On the same day, a number of Chinese-financed factories in the industrial zones of Hlaingthayar township were set ablaze, prompting strong condemnation from the Chinese government. The arson attacks come amid rising anti-China sentiment in Myanmar, which has intensified due to China’s failure to publicly condemn the coup. Chinese state media alleged that “incite[ment]” by Western countries resulted in Chinese-financed factories being targeted (Channel News Asia, 19 March 2021). The response from the Chinese government prompted angry comments from the Myanmar public for its failure to acknowledge the deadly violence on Sunday (AP, 15 March 2021). The controversy was followed by another incident at a Chinese-owned factory two days later, where security forces shot and killed at least six workers during a salary dispute between workers and the employer (Myanmar Now, 17 March 2021). While the accounts of the incident remain disputed, it has further fuelled anti-China sentiment in the country.

Following the violent events on 14 March, the military junta placed Hlaingthayar and five other low-income townships in Yangon and parts of Mandalay under martial law (Guardian, 15 March 2021). Mobile data services were blocked nationwide beginning 15 March, under orders by the military junta. This has seriously impeded access to information and other services (Myanmar Now, 20 March 2021). Facing increased insecurity and the ongoing shutdown of many factories, thousands of residents in Hlaingthayar township — mostly internal migrants — fled the city to return to their native towns (Frontier Myanmar, 16 March 2021).

Elsewhere in Myanmar, tensions between the Myanmar military and Kachin Independence Organization/Kachin Independence Army (KIO/KIA) flared up last week in Kachin state. Notably, an attack launched by the KIO/KIA against a Myanmar military base resulted in several fatalities (RFA, 18 March 2021). The intensified clashes come amid increased public support for the KIO/KIA by anti-coup demonstrators in Kachin State (Al Jazeera, 19 March 2021).

Meanwhile, the Committee Representing Pyidaungsu Hluttaw (CRPH) — made of up ousted elected lawmakers — issued a statement announcing the removal of all ethnic armed organizations (EAOs) from the government’s list of terrorist organizations or unlawful associations (Network Media Group, 18 March 2021). This, combined with the CRPH’s earlier labelling of the Myanmar military’s State Administration Council (SAC) as a “terrorist organization”, leaves the SAC alone on the list (Myanmar Now, 17 March 2021). Prior to the coup, the Arakan Rohingya Salvation Army (ARSA) and the United League of Arakan/Arakan Army (ULA/AA) were the only two groups on the list. Ten other EAOs had previously been delisted after Myanmar’s democratic transition as part of the peace process. The delisting of the armed groups as “terrorist organizations” follows weeks of talks between the CRPH and a number of EAOs, which have taken place amid growing calls by the general public for the establishment of a federal army to overthrow the military junta (Myanmar Now, 20 March 2021).

Fighting between government forces and rebel groups was also reported in the Philippines last week. There was an increase in clashes between state forces and the communist New People’s Army (NPA). Fighting was heaviest in the Cordillera Administrative Region where more than a third of the events took place. Nationwide, ACLED records at least eight militants killed in separate incidents (Philippine Daily Inquirer, 13 March 2021; Philippine Star, 14 March 2021; Manilla Times, 18 March 2021). The increase in violence comes as the anniversary of the NPA’s founding approaches on 29 March. Clashes between state forces and the NPA are expected to increase as the date draws closer.

Elsewhere, in West Papua, Indonesia, there has been a lull in violence involving Papuan separatist groups this month following consecutive weeks of violence earlier in the year. Nonetheless, it was still reported last week that on 12 March, the West Papua National Liberation Army (TPNPB) forcefully boarded a regional airline in Puncak regency and held the pilot and three passengers hostage. The rebels demand part of the village funds be given to them as ransom (Tribunnews, 14 March 2021). This is the latest incident where TPNPB forces have targeted civilian aircraft. Earlier, in January, Papuan rebels shot at a civilian aircraft that had allegedly been used to transport goods and personnel for state forces. No casualties have resulted from these incidents thus far.

Also in Indonesia, protests against the creation of a third province in West Papua continue alongside calls for the government to pass the Indigenous Peoples Bill. The bill, which was introduced in 2012, was included in this year’s national legislation program (Prolegnas) once more after deliberations on it failed to move forward in 2017 (Jakarta Post, 25 January 2021). Aside from being able to provide recognition of indigenous peoples’ ownership of customary land, advocates of the bill also consider it to be a safeguard against the controversial Omnibus Law on Job Creations that was passed last year. The passage of the Omnibus Law, which critics consider to be overly pro-business and detrimental to indigenous and labor rights, sparked weeks of violent demonstrations last year.

Additionally, environmental groups in Indonesia and Malaysia took to the streets on 19 March to call on their governments to declare a climate emergency. The coordinated protests appear to be a response to the call for a global climate strike — the first this year — launched by environmental group Fridays for Future (Green Matters, 14 January 2021).

Finally, in Thailand, anti-government protesters set up camp near the Government House on 13 March to step up pressure on the government to meet their demands (Bangkok Post, 13 March 2021). The protesters had marched 246km from Nakhon Ratchasima province to Bangkok — called the Dern Talu Fah (“Walk through the Sky”) march —  the previous week. They continue to call for the release of detained protest leaders, the repeal of the royal defamation law, constitutional reform, as well as the resignation of the prime minister. Protest leaders from the People’s Party group, which has played a leading role in the anti-government movement, continue to be detained without bail. One of the protest leaders has started a partial hunger strike in opposition to their denial of bail (Bangkok Post, 17 March 2021). Concerns over the protest leaders’ safety in custody have also been rising following allegations that prison guards had attempted to move some of them to an unknown location at night (Prachatai, 16 March 2021).