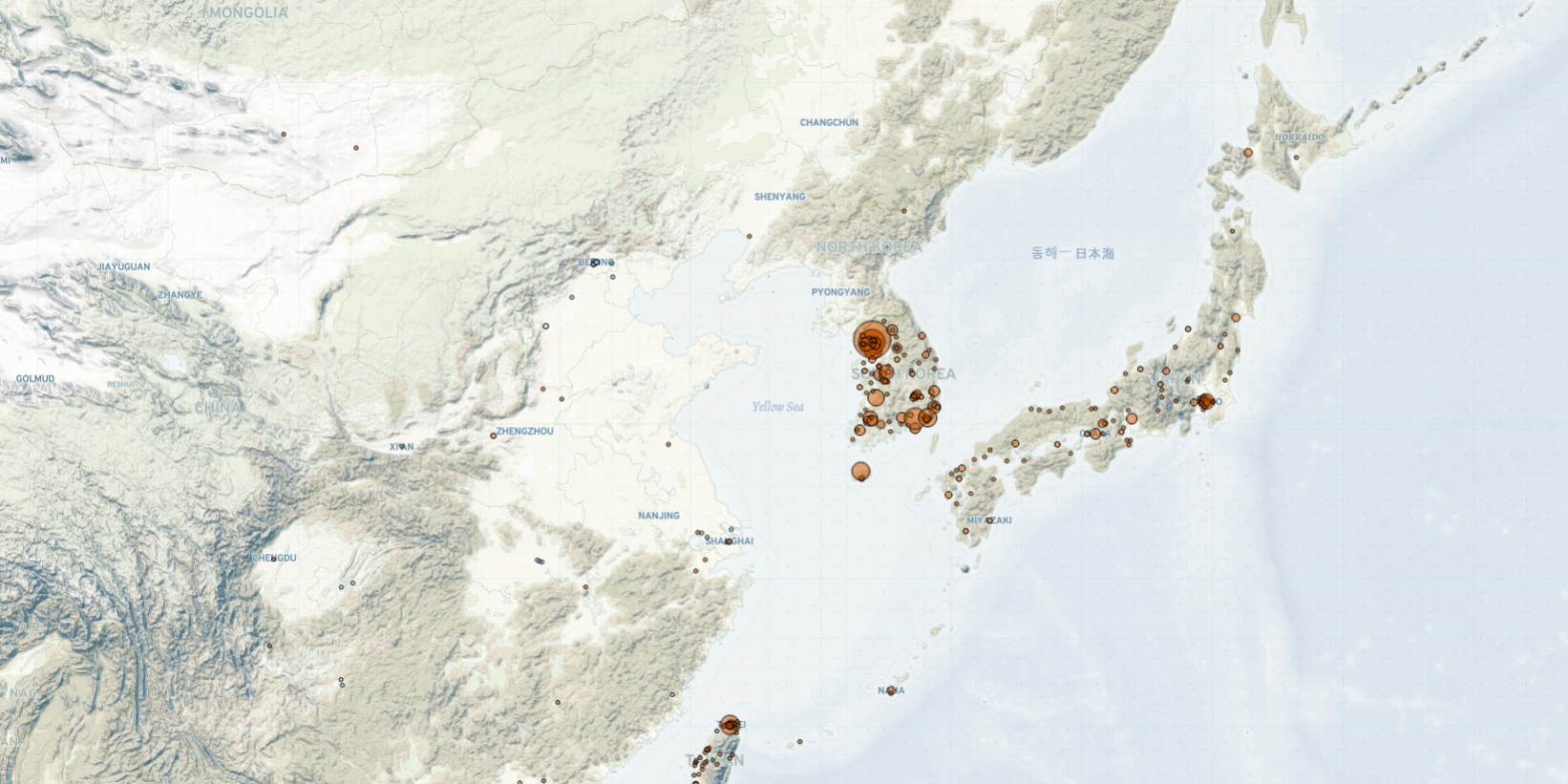 Last week in East Asia, two ballistic missiles were fired by North Korea into the Sea of Japan. This marks the first time such a test has been conducted by the North Korean government since US President Joe Biden has assumed office. Meanwhile, in South Korea, protests were held last week related to the upcoming mayoral elections and a land speculation scandal involving a state-run company. In Japan, people demonstrated in Tokyo against a series of digital reform bills that raise concerns about privacy rights. In Mongolia, people gathered in Ulaanbaatar to demand the president dismiss judges suspected of receiving bribes. In China, the trial for a former Canadian diplomat caught in the center of a US-China diplomatic feud began, with dozens of diplomats from other countries gathering to express solidarity. In Hong Kong, a new ruling states that all individuals can be convicted under the Public Order Ordinance if found to have been involved in the 2019-20 anti-extradition bill demonstrations, even if they were not physically present in a protest. Lastly, solidarity demonstrations against the military coup in Myanmar continue to be held in Taiwan, South Korea, and Japan.

On 24 March, North Korea fired two ballistic missiles that landed in the Sea of Japan, outside of Japan’s exclusive economic zone (RT, 24 March 2021). According to experts, the test missiles appear to be a new type of short-range ballistic missile, displayed during the January 2021 military parade (NK News, 25 March 2021). This comes after the North Korean government launched two short-range cruise missiles on 21 March, weapons which are not covered by the UN Security Council testing ban (Al Jazeera, 24 March 2021). However, the ballistic missile launch on 24 March represents a violation of the UN Security Council resolution. The tests, which are the first conducted during the Biden administration, come amid increased tensions between the US and North Korea. Kim Jong-Un’s sister, often believed to be one of most powerful figures in North Korea, recently warned the US against “causing a stink” if it wants peace (BBC, 16 March 2021). She also expressed anger at the joint military exercises involving US and South Korean troops, which took place in South Korea between 8-16 March. President Biden has stated that the US will “respond accordingly” if North Korea chooses to escalate (AP, 26 March 2021).

In South Korea, various groups continue to protest ahead of the April mayoral by-elections for Seoul and Busan. As the by-elections have been marred by alleged sexual harassment incidents committed by former mayors, women’s groups protested against the lack of gender equality policies on current mayoral candidates’ agendas (Hankook Ilbo, 24 March 2021; Yonhap News Agency, 25 March 2021). In addition to the usual party-staged protests, health, anti-nuclear, and environmental groups demonstrated in Seoul and Busan as well. They ask the mayoral candidates to come up with policy pledges to reduce carbon emissions and to strengthen public health services (Yonhap News Agency, 25 March 2021). More protests related to the by-elections are expected up to election day on 7 April.

Also in South Korea, national outrage over a land speculation scandal involving public officials continued last week. Lawmakers, social activists, and students held nationwide protests. They urged authorities to expand their investigation, which currently focuses only on officials of the state-run company involved in the scandal, to focus on all government elected officials (EDaily, 22 March 2021; Yonhap News Agency, 26 March 2021). The civic groups that have uncovered the corruption among representatives of a state-run company urged the National Assembly to enact and revise five bills that would prevent corruption among public officials (Munhwa Ilbo, 23 March 2021). This development may bring additional protests during the upcoming mayoral by-elections.

Meanwhile, in Japan, two protest events occurred in Tokyo over privacy rights related to the My Number system, a tax and social security ID system first rolled-out in 2015. While the system has been a heated issue amongst protest groups before, the issue has generally remained dormant during the pandemic, as more pressing issues have arisen. Opposition to the system appears to have been renewed by a series of recent bills aimed at digitizing the system, which are expected to go through the lower house of the Diet soon, and the creation of a department focused on the development of government cyber capabilities. Both are seen by protesters as eroding individuals’ rights to privacy and exposing the data of Japanese citizens to unnecessary risk (Shimbun Akahata, 25 March 2021). This comes after the revelation that LINE, Japan’s biggest messaging platform, has been silently sharing user data with Chinese entities (Japan Times, 17 March 2021). As discussion of the bills proceeds, this issue is likely to become more salient amongst protest groups.

In Mongolia, thousands of people gathered last week to demonstrate in the central square of the capital, despite tighter coronavirus restrictions in Ulaanbaatar, which ban gatherings and demonstrations (Shuurhai.mn, 26 March 2021). The protesters demand that the president dismiss judges who are suspected of receiving bribes in exchange for influence over judicial decisions from a lawyer who works closely with the President’s Office. The lawyer is also believed to have assisted the accused judges of procuring sexual services from prostitutes in a scandal which came to light in February (Udriin Sonin.mn, 23 February 2021).

In China, close to 30 diplomats from over 20 countries and jurisdictions gathered outside a court in Beijing to show support for the former Canadian diplomat and businessman Michael Kovrig who is on trial for espionage charges (Globe and Mail, 21 March 2021). Michael Kovrig was one of two Canadians arrested in China days after an executive of China telecom giant Huawei (also the daughter of the founder) was arrested in Canada at the request of US officials in 2018 (Guardian, 19 March 2021). The detained individuals have since been caught in the crossfire of the ongoing diplomatic spat between China and the United States. While Kovrig’s arrest is widely regarded by Western countries and international media as a retaliatory move by China, China alleges that Kovrig had been “stealing and spying on sensitive Chinese information and intelligence” (Reuters, 4 March 2019).

Meanwhile, in Hong Kong, the Court of Final Appeal ruled that anyone who encouraged or promoted an “unlawful assembly or riot” could be convicted under the Public Order Ordinance, even if they were not physically present at the scene of the protest (HKFP, 26 March 2021). Under the new ruling, individuals who are involved in supporting protests — whether in prominent or more minor roles — are criminally liable. This includes those deemed to have “masterminded,” funded, or promoted an unlawful assembly, as well as anyone who has provided “back-up support” or driven a vehicle to help protesters evade arrest (RFA, 25 March 2021).

Demonstrations of solidarity with the people of Myanmar amid the military coup continue to be held in Taiwan, South Korea, and Japan. In Taiwan, up to 1,000 protesters rallied in Taipei in solidarity with Myanmar protesters as the military junta intensified its efforts to crack down on ongoing anti-coup demonstrations (New Bloom Magazine, 21 March 2021). Several politicians also called for action from the Taiwanese legislature to assist Burmese democracy activists (New Bloom Magazine, 21 March 2021). In South Korea, Myanmar nationals, as well as labor, student, environmental, and religious groups, continue to hold solidarity rallies across the country (KBS, 25 March 2021). In Japan, people gathered in Tokyo and Hiroshima to protest against the Myanmar military coup (Twitter, 22 March 2021; Tokyo Shimbun, 23 March 2021). In Tokyo, Myanmar nationals held a 48-hour hunger strike in front of the United Nations University (Twitter, 22 March 2021).