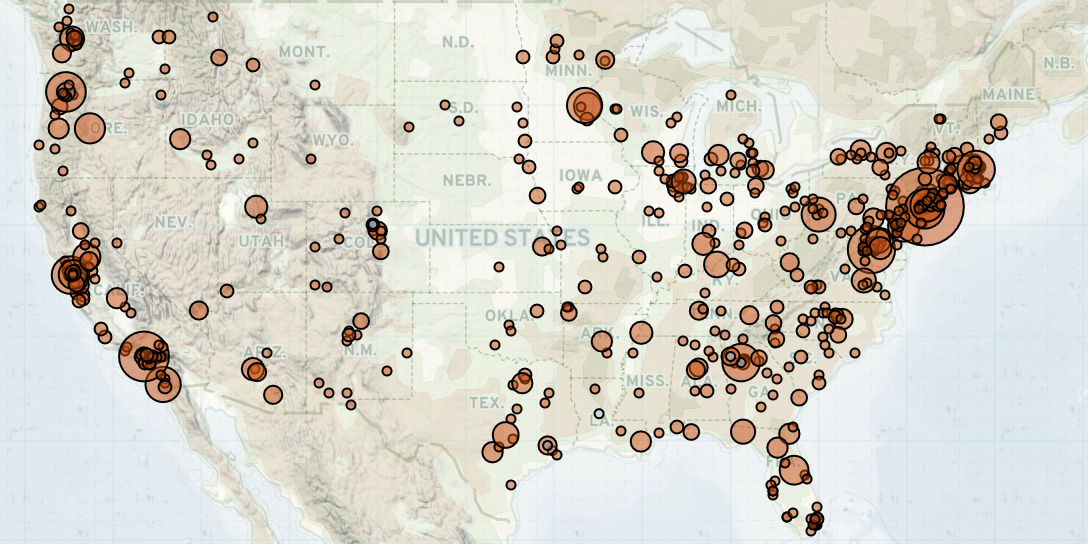 In the aftermath of the mass shootings in Atlanta, Georgia and Boulder, Colorado, demonstration events in the United States surged last week, continuing an upward trend for the third consecutive week. Vigils and demonstrations against gun violence were held across the country in the wake of both shootings and a thwarted shooting at a grocery store in Atlanta, Georgia on 21 March (The Atlanta Journal-Constitution, 25 March 2021). Additionally, demonstrations in support of Asian American and Pacific Islander (AAPI) communities continued to increase amid the ongoing wave of anti-Asian attacks. Although a similar number of demonstrations connected to the COVID-19 pandemic were reported last week relative to the week prior, demonstrations against pandemic-related restrictions decreased by approximately 15%. Notably, demonstrations associated with the Black Lives Matter (BLM) movement significantly declined, as many anti-racist activists have at least temporarily shifted focus to protesting violence targeting AAPI communities.

A deadly mass shooting in Boulder, Colorado on 22 March came less than a week after the Atlanta-area mass shooting on 16 March. A gunman, Ahmad Al Aliwi Alissa, walked into a grocery store and opened fire with an AR-556 pistol, a short-barreled variant of the AR-15 rifle, for 58 minutes, killing 10 people including a police officer (Denver Post, 27 March 2021). The shooter was arrested at the scene and charged with 10 counts of first-degree murder. The motive behind the shooting has not yet been released and an investigation is ongoing (ABC News, 26 March 2021). The Boulder shooting occurred only 10 days after an assault weapons ban, which likely would have included the AR-556, was overturned in the Boulder District Court on 12 March (Washington Post, 23 March 2021). Immediately after the Boulder shooting incident, President Joe Biden released a statement on 23 March in which he urged Congress to pass bills that would help prevent gun violence and tighten loopholes in the background check system (White House, 23 March 2021). Numerous vigils and demonstrations against gun violence, often calling for stricter controls on gun purchases, were held in Colorado and across the country (USA Today, 24 March 2021).

Vigils and demonstrations demanding an end to violence against the AAPI community also increased last week around the US (NPR, 20 March 2021). Demonstration events in support of Asian Americans more than tripled last week compared to the week prior. In New York City, three different unprovoked attacks against Asian Americans were reported in one day on 21 March (NBC New York, 23 March 2021). In San Francisco, a man struck three Asian Americans in the street in an unprovoked attack (KTLA, 24 March 2021). In response to the rising violence, some Asian American groups began patrolling to protect AAPI communities. In Chinatown in San Francisco, California, the Asian Firefighters Association and off-duty firefighters, along with San Francisco police personnel and the sheriff, patrolled the streets on 23 March (KPIX, 23 March 2021). In Japantown in San Jose, California, unarmed citizens launched a foot patrol around the community on 22 March (NBC Bay Area, 22 March 2021). Meanwhile, President Biden announced a broad set of actions to “advance safety, inclusion, and belonging for all Asian American, Native Hawaiian, and Pacific Islander communities” on 30 March (White House, 30 March 2021).

Demonstrations related to the coronavirus continued to account for a sizable portion of demonstrations amid reports of an incoming fourth wave of new COVID-19 cases in the US (Forbes, 25 March 2021). These demonstrations accounted for approximately a quarter of all demonstration events reported last week. With the majority of students now in schools that offer daily in-person classes (Washington Post, 29 March 2021), demonstrations calling for reopening schools have dropped precipitously — by approximately three-fourths compared to the week prior. For more on the pandemic’s impact on protest trends, see ACLED’s new report: A National Emergency: How COVID-19 Is Fueling Unrest in the US.

Demonstration events associated with the BLM movement declined by approximately 45% last week compared to the week prior. The immediate decline in BLM demonstrations after the Atlanta shooting incident appears to be in part caused by anti-racist demonstrators focusing on recent attacks on AAPI communities (ABC7, 28 March 2021; Washington Post, 24 March 2021). Additionally, several BLM leaders participated in demonstrations in support of AAPI communities as an act of anti-racist solidarity (North Jersey.com, 25 March 2021).