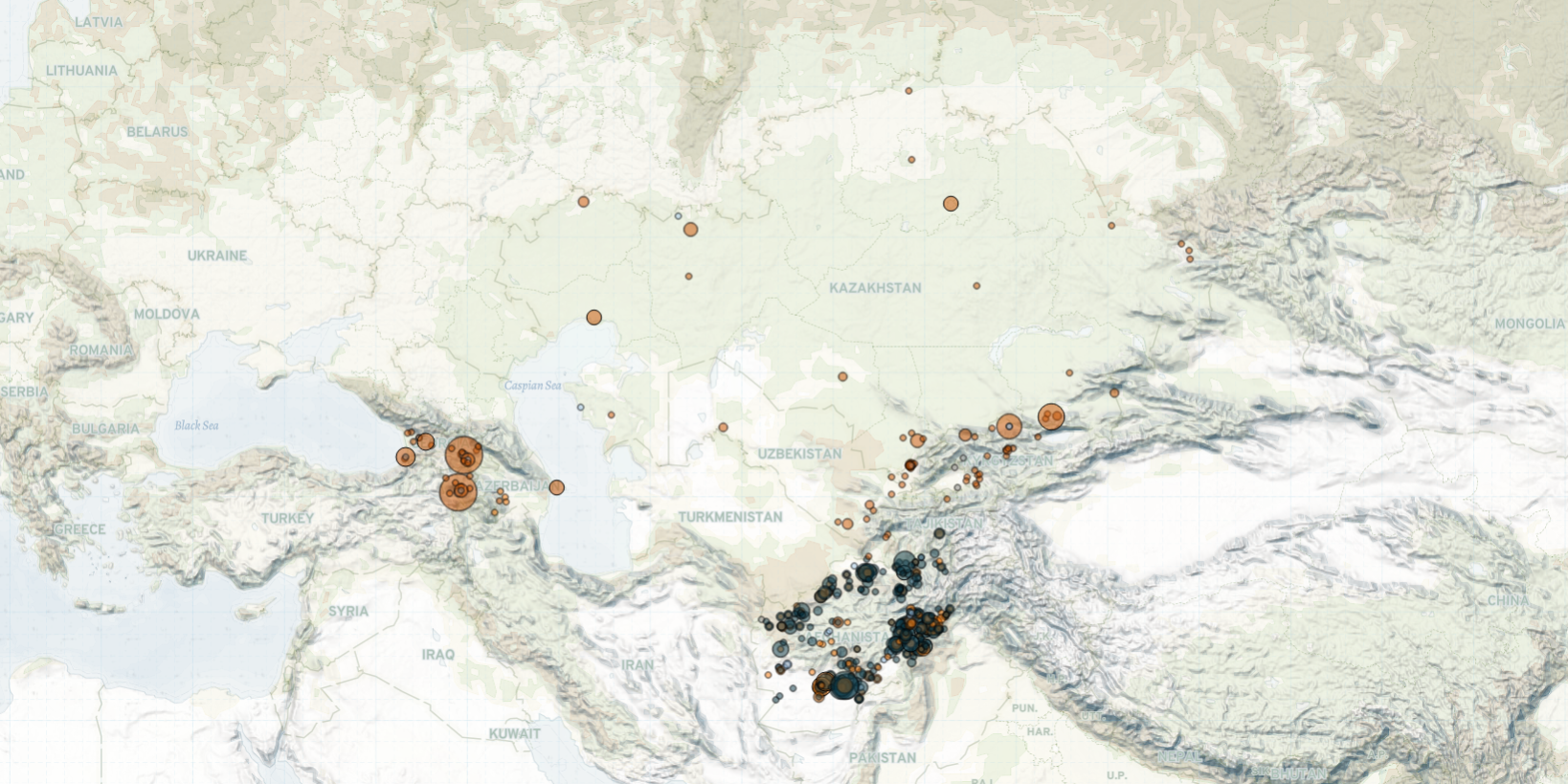 Last week in Central Asia and the Caucasus, violence continued between Afghan forces and the Taliban. Afghan forces expanded attacks on the Taliban to include their affiliate, the Haqqani Network. In Kazakhstan, protests took place in several cities against the increasing economic influence of China in the country. Protesters also denounced the treatment of the ethnic minorities in China’s northwestern region of Xinjiang. In Uzbekistan, an activist who has publicly defended LGBT rights was attacked by unidentified assailants.

In Afghanistan,1ACLED is currently conducting a review of sourcing and reporting of the conflict in Afghanistan since 2020. Kandahar province was once again the most active battleground for clashes between Afghan forces and the Taliban, followed by Helmand province. Afghan forces regained control of villages in the Imam Sahib district of Kunduz province from the Taliban. Meanwhile, three Afghan forces were killed in an Afghan military helicopter crash. The Taliban claims that they gunned down the helicopter — a claim that the Afghan Ministry of Defense has rejected (Pajhwok Afghan News, 1 April 2021).

At the same time, Afghanistan’s intelligence agency, the National Directorate of Security (NDS), continues its operations to target and kill Islamic State (IS) militants in Nangarhar province. The NDS has also reported attacks against the Haqqani Network, which is affiliated with the Taliban.

Meanwhile, during an operation against the Taliban, Khost Protection Force (KPF) — Afghan militias trained and overseen by the US Central Intelligence Agency (CIA) — reportedly killed at least two civilians in the Sabari district of Khost province (AP, 29 March 2021). KPF has previously been accused of war crimes against civilians and of operating without accountability (Foreign Policy, 16 November 2020; Afghanistan Analysts Network, 21 January 2019).

In addition to attacks on civilians by the KPF, civilians continue to face other threats as well. Assassinations, for example, continue to be committed at a high rate, mostly carried out by unknown groups. Despite peace talks between the Afghan government and the Taliban, there has been an increase in assassinations against government officials, journalists, and religious scholars (France 24, 1 March 2021).

Furthermore, Pakistan’s military shelled Afghan areas in Nangarhar and Kunar provinces. A similar attack also took place the week prior in Kunar province. It is unclear whether there were civilian casualties. Such shelling usually occurs along the Durand Line, a highly contested border line between Afghanistan and Pakistan (Eurasia Review, 29 September 2020).

In Kazakhstan, hundreds of opposition activists protested in several major cities against China’s economic expansion, calling for the Kazakh government to roll back Chinese investment projects in the country. The protests, organized by the unregistered Democratic Party of Kazakhstan and the banned Democratic Choice of Kazakhstan party, led to the detention of several activists by the police. Activists also called for the release of ethnic Kazakhs kept in internment camps in China’s Xinjiang region following the weeks-long protests near the Chinese consulate in Almaty by the relatives of ethnic Kazakhs. The alleged persecution of indigenous Turkic-speaking Muslims, including ethnic Kazakhs and Uyghurs in Xinjiang, began in 2017 (Council on Foreign Relations, 1 March 2021). ACLED records 31 demonstration events over this issue since 2018, with most of them taking place this year. Meanwhile, joint production and technological projects with China and initiatives by Kazakh authorities to attract Chinese investment have also been on the rise, sparking protests against China’s economic influence (Carnegie Moscow Center, 30 October 2019).

In Uzbekistan, an independent blogger-activist, Miraziz Bozorov, was attacked and severely injured by unknown masked men outside his residence in Tashkent city. The incident happened after he publicly called for decriminalization of the LGBT lifestyle in Uzbekistan on social media (RFE/RL, 28 March 2021). Days later, Bozorov’s friend, another activist, was also assaulted by officers at a police post in Tashkent after being summoned for questioning (RFE/RL, 30 March 2021). Prior the attack, an anti-LGBT demonstration was staged in Tashkent. The attack was met with immediate reaction from international rights groups who have expressed their concerns over violence against the LGBT community in the country (HRW, 31 March 2021).