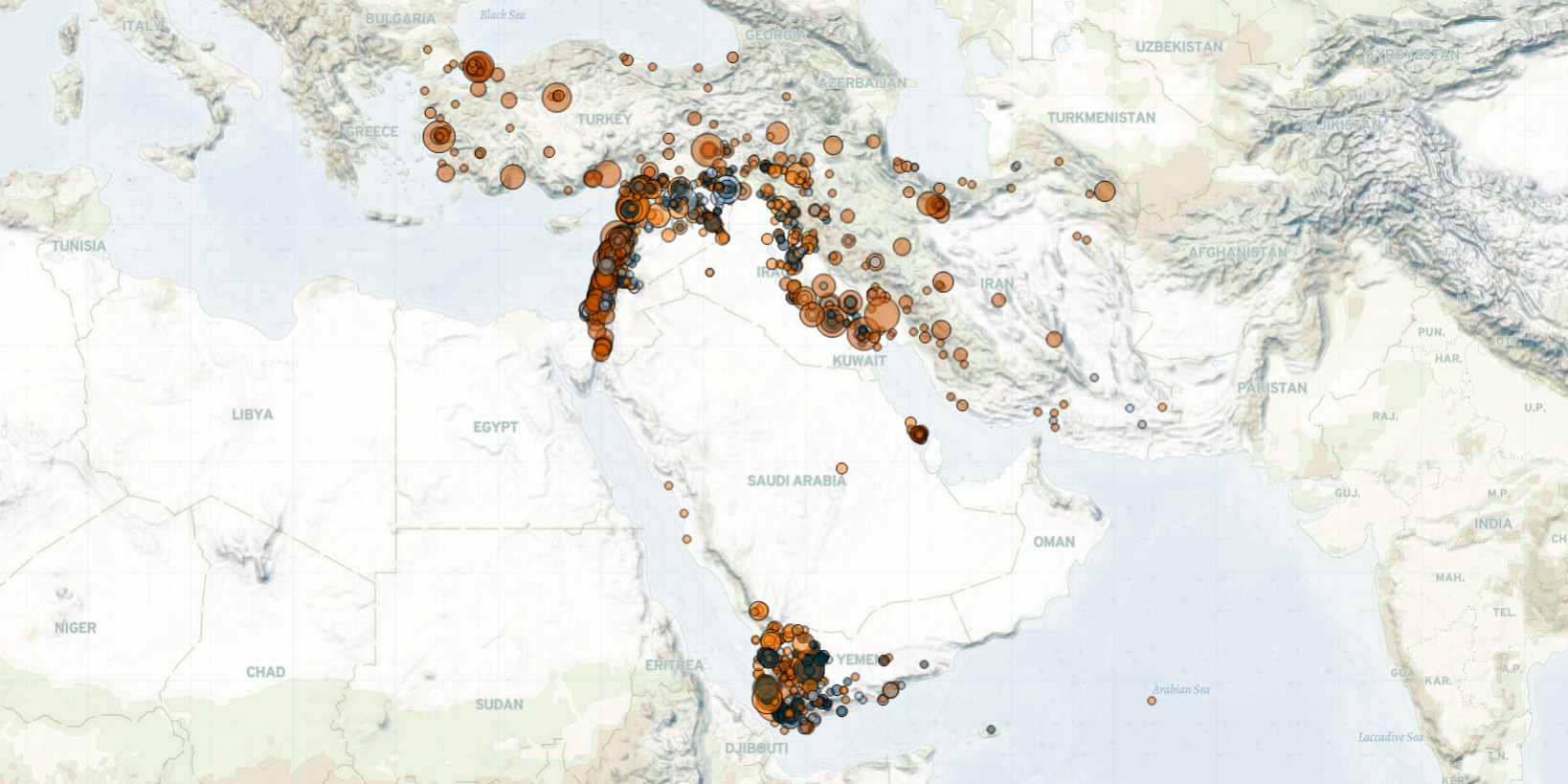 Last week in the Middle East, intense fighting was reported in Yemen’s Marib and Hodeidah governorates, whereas clashes decreased in Taizz and Hajjah. Meanwhile, Houthi forces claim to have targeted Saudi Arabia with four drones. In Bahrain, demonstrations spiked over concerns for prisoners amid an outbreak of the coronavirus at Jaw Prison. In Syria, a large scale security operation was launched by the Syrian Democratic Forces (QSD) in Al Hasakeh. Elsewhere, convoys contracted by the US-led Coalition forces were attacked several times by unidentified groups in Iraq. In Lebanon, riots were reported at supermarkets over subsidized items. Lastly, several demonstrations were staged in Iran over the China-Iran Strategic Cooperation Agreement.

In Yemen, Marib and Hodeidah were focal points for conflict between 27 March and 2 April. In the Marib governorate, there was an over 80% increase in violence from the previous week, driven largely by an increase in airstrikes. The majority of this increase in conflict was concentrated in the Sirwah district. Houthi forces advanced further towards Marib city and are now only eight kilometers away (Twitter, 5 April 2021).

Meanwhile, there were significant decreases in violence in both the Taizz and Hajjah governorates last week. The frontlines have shifted from the Hayfan district to the Maqbanah district, and pro-Hadi territorial gains have largely stalled as military forces have not seen the same type of gains that they have in previous weeks. In Hajjah, there was a notable absence of any major military clashes reported between pro-Hadi and Houthi forces. Pro-Hadi forces have been unable to make any territorial gains since the first thrust of their offensive in the Abs district. The offensive has largely failed to draw Houthi resources away from the offensive in the Marib governorate.

In Saudi Arabia, there was a notable decline in Houthi drone and ballistic missiles last week relative to previous weeks. Saudi military forces reported that they intercepted Houthi drones in the Khamis Mushait and Jazan areas. Houthi forces reported that they successfully struck Riyadh with four explosive drones (Twitter, 1 April 2021), though there has not yet been any independent confirmation.

In Bahrain, dozens of protest events took place all across the country last week amid an increasing number of coronavirus cases in Jaw Central Prison (Al Wafa, 1 April 2021), where many political dissidents and prisoners of conscience are imprisoned. Among them is Sheikh Zuhair Ashour, who was recently assaulted by a former soldier (see the latest ACLED-Religion Overview for more). Last week saw more protest events in Bahrain than any other week in 2021 thus far.

In Syria, clashes and shelling barrages continued between opposition rebels and the People’s Protection Units (YPG) along the frontlines in the northern Aleppo countryside, though no fatalities were reported. In eastern Syria, QSD launched a large scale security campaign in Hole camp in Al Hasakeh. An estimated 120 people, including 20 Islamic State members and more than 35 women, were detained during the five-day operation (BBC, 28 March 2021).

In Iraq, several attacks by unidentified groups targeted convoys contracted by the Coalition forces, mainly in central Iraq. One convoy was hit twice during the same day, while another was targeted with a sticky-bomb, though no fatalities were reported. Meanwhile, hundreds of students across the country continued to protest throughout last week in opposition to in-person exams, citing the risks involved due to the coronavirus pandemic and social distancing measures. Students demand that all or some of their exams be held online (Shafaaq News, 1 April 2021).

Similar to recent weeks, riots were reported at supermarkets in Lebanon as scuffles broke out between citizens and retail staff over subsidized goods. Lebanon is a net importer of food, and there is up to 100% reliance on items such as refined sugar, rice, and vegetable oil for domestic consumption (Executive, 11 April 2020). Amid the plummeting value of the currency, Lebanese people are facing the highest food prices in the Middle East and North Africa region (Alarabiya, 27 March 2021). With the Central Bank having requested to gradually lift subsidies — scaling back subsidized items from 300 to 100 goods (VOA, 2 April 2021) — fears of shortages have triggered panic buying and hoarding. Many supermarkets have started to allow one subsidized item per customer, leading to fights. Angry shoppers accuse grocery stores of hiding stock to sell later at higher prices (The National, 4 April 2021).

Lastly, sporadic demonstrations were staged in Iran against the Strategic Cooperation Agreement between Iran and China, signed on 27 March. The agreement aims to bolster economic cooperation between Tehran and Beijing, including in the Belt and Road infrastructure project, which stretches from East Asia to Europe (Anadolu Agency, 30 March 2021). Demonstrators have denounced the secrecy around the pact, accusing the government of “selling” Iran’s sovereignty (Iran New Wire, 1 April 2021). Iranian officials suggest that the document is a roadmap rather than a legally binding international treaty or agreement, and its content has not been published at China’s request (Iran International, 30 March 2021). Some Western analysts have expressed concerns that the deal threatens US interests in the Middle East (The Diplomat, 6 April 2021). Many experts, however, believe that the agreement is largely aspirational and its significance has been blown out of proportion (The Guardian, 30 March 2021).