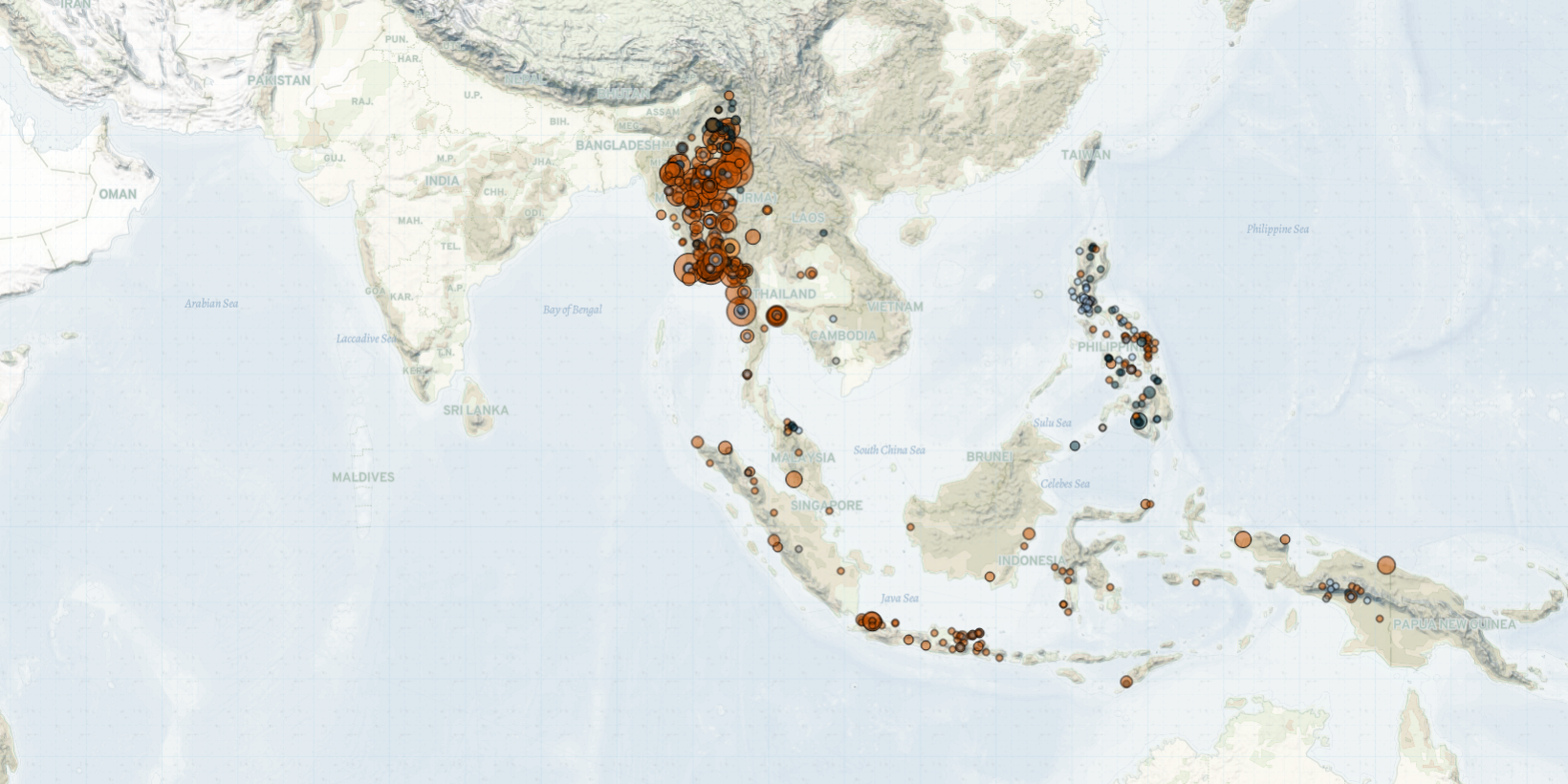 Last week in Southeast Asia, the violent crackdown by security forces on anti-coup demonstrators in Myanmar turned even more deadly than preceding weeks amid increasing reports of battlefield tactics being used against demonstrators. Meanwhile, as support for the anti-coup movement by ethnic armed organizations (EAOs) continues to gain momentum, clashes between the military and EAOs intensified in both northern and southern Myanmar. Meanwhile, protest activity increased across the region last week: anti-government protesters in Thailand stepped up their calls for the release of detained protesters; protesters in Indonesia condemned violence against journalists; and government-aligned groups in the Philippines protested against the communist insurgency in the country. Lastly, violence by Islamist groups increased in Indonesia last week ahead of the Easter holiday.

Two months after the military coup in Myanmar, the military junta intensified its crackdown on anti-coup demonstrators and civilians, as supporters of the anti-coup movement continue to resist military rule. Last week, security forces increasingly resorted to using heavy weaponry, with reports of hand grenades and rocket-propelled grenades, in addition to heavy machine guns and snipers, being used against civilians (UN, 1 April 2021). A day before Armed Forces Day, which is commemorated annually on 27 March, the military declared on state-controlled television that they would shoot protesters in the head if they continued to protest. The ensuing violent crackdown by the military junta on 27 March culminated in the most lethal day of killings since 1 February, with over 100 demonstrators and civilians killed by security forces across two dozen towns and cities (Channel News Asia, 27 March 2021). This marks, by far, the highest death toll in a single day.

Meanwhile, the military expanded their offensives against EAOs last week. In southeastern Myanmar, the conflict between the Karen National Union/Karen National Liberation Army (KNU/KNLA) and the military escalated, as the military launched its first air strike on the KNU/KNLA in more than 20 years, also on Armed Forces Day (Frontier Myanmar, 2 April 2021). The air strikes, which continued on a near-daily basis last week, have forced thousands of refugees to flee into the jungle or across the border into Thailand (RFA, 30 March 2021). Reports by local advocacy groups that Thai authorities forced the Kayin refugees to turn back sparked an outcry, but the Thai government insists that the refugees left voluntarily (The Straits Times, 30 March 2021). Elsewhere, in northern Shan and Kachin states, battles between the Kachin Independence Organization/Kachin Independence Army (KIO/KIA) and state forces increased. Notably, the KIO/KIA launched simultaneous attacks on four police stations in Hpakant township on 28 March, which resulted in dozens of police officers being killed (Myanmar Now, 28 March 2021).

Meanwhile, more EAOs have publicly declared their support for the anti-coup movement to oppose the military junta (Eleven Media Group, 31 March 2021). During the week, the Brotherhood Alliance — an alliance of three EAOs — broke their silence and issued a statement pledging to fight alongside citizens if the Myanmar military does not stop killing civilians (Myanmar Now, 30 March 2021). The Brotherhood Alliance includes the United League of Arakan/Arakan Army (ULA/AA), which the military junta removed from the Myanmar government’s list of designated terrorist organizations just two weeks ago. The alignment of more EAOs with the anti-coup movement comes amid greater calls by the Myanmar public for the Committee Representing Pyidaungsu Hluttaw (CRPH) — the civilian government formed by lawmakers ousted by the military coup — to work with EAOs to establish a federal army to overthrow the military junta (Guardian, 20 March 2021; Irrawaddy, 23 March 2021).

Other key political developments last week include the announcement by the CRPH that the military-drafted 2008 Constitution has been abolished. The CRPH also presented a new charter that outlines plans to set up a “national unity government” and to draft a new Constitution to establish federal democracy in Myanmar (The Straits Times, 1 April 2021). The announcements were well received by supporters of the anti-coup movement, who symbolically burned physical copies of the 2008 Constitution during demonstrations (Myanmar Now, 1 April 2021). Pundits remarked that while the latest moves by the CRPH are “more symbolic than practical,” they may serve to strengthen the anti-coup movement’s alliances with EAOs to resist the military junta (AP, 1 April 2021).

Separately, the ousted State Counsellor, Daw Aung San Suu Kyi, met with her legal team for the first time since she was detained on 1 February. Her chief lawyer later revealed that the military junta has brought a fifth charge against her under the official secrets law, which carries a maximum jail term of 14 years. This marks the most serious charge brought against Daw Aung San Suu Kyi to date. Meanwhile, the military junta ordered all wireless broadband data services in Myanmar to be suspended starting from 2 April until further notice. In addition to the blockade of mobile internet services since 15 March, the new directive may edge the country towards a near-complete information blackout (AP, 2 April 2021).

Elsewhere, in Thailand, there was an uptick in anti-government protests last week following mass arrests of protesters. The arrests took place on 28 March, when more than 60 anti-government protesters who had been camping out at the Government House in Bangkok for over two weeks were dispersed and arrested. The protesters had previously marched for over 100km from Nakhon Ratchasima province to Bangkok to demand the release of arrested protesters, the resignation of the prime minister, as well as reforms to the constitution and the monarchy. After they regrouped later the same day to continue protesting, police arrested yet another 30 protesters, bringing the total number of arrests to almost 100 (Reuters, 29 March 2021). Protests later in the week condemned these arrests and called for the release of the detained protesters. As well, calls to release protest leaders being detained without bail have increased.

Meanwhile, in Indonesia, protests condemning violence against journalists increased last week. This comes after a journalist was physically assaulted and held captive by security guards while on assignment to report on alleged corruption involving a former government official. The incident comes a couple of weeks after another journalist was also physically prevented from carrying out his assignment by a government official’s security detail, while yet another was beaten up by police (Tribun News, 17 March 2021; Kompas, 19 March 2021). Protesters, who were largely also journalists themselves, criticized the trend of increasing aggression towards journalists and expressed concern over the state of press freedom in the country.

In the Philippines, there was a dramatic increase in protests opposing the Communist Party of the Philippines (CPP) and its armed wing, the New People’s Army (NPA), on 29 March, the 52nd anniversary of the NPA’s founding. Many of these demonstrations were either sponsored and/or supported by the government. Military, police, and government officials also participated in some of these protests (Philippine News Agency, 30 March 2021).

Relatedly, following the particularly lethal clashes between the NPA and state forces the preceding week, there was no increase in fighting between the NPA and the government last week in the lead-up to and during the NPA anniversary. In fact, the number of fatalities decreased last week relative to the week prior.

Similarly, violence linked to Islamist groups in the Philippines was also muted last week after a week of unusually heightened activity. In contrast, however, there was a spike in violence by Islamist militants in Indonesia as the Christian Holy Week began. On 28 March, a couple from the Islamic State-backed Jemaah Ansharut Daulah (JAD) carried out a suicide bombing at a church in Makassar city after a Palm Sunday mass. The attack left 20 people injured, with some in critical condition (Jakarta Post, 29 March 2021). JAD members have carried out similar attacks in the past, with the most notable being the series of coordinated attacks targeting three churches in Surabaya city in 2018. In response to last week’s bombing, authorities carried out coordinated raids and arrested dozens of alleged Islamist militants across the country (Kompas, 31 March 2021). Nonetheless, yet another attack was carried out just a few days later in Jakarta, when an Islamic State-inspired woman fired shots at Indonesian police headquarters. The assailant, who was allegedly a lone wolf, was killed by police during the incident.