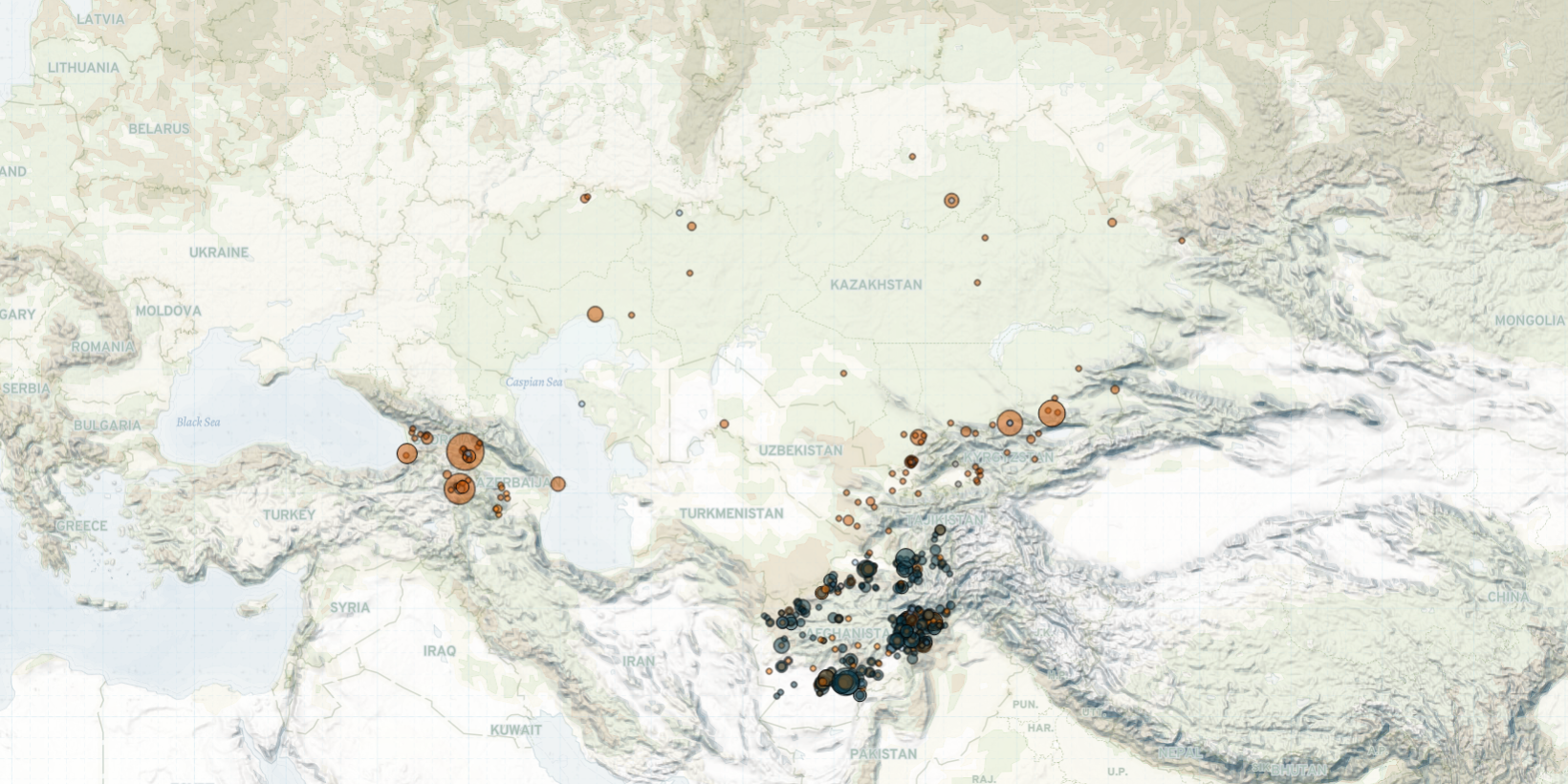 Last week in Central Asia and the Caucasus, clashes continued between the Taliban and Afghan forces, with large military operations and territorial gains made by both parties. The Taliban also shelled a NATO base in Kandahar province, attacking international troops for the first time in more than a year. In the de facto Republic of Artsakh, five Azerbaijani servicemen were injured by remnant landmines. Meanwhile, relatives of missing soldiers and prisoners of the Artsakh (Nagorno-Karabakh) War protested in both Azerbaijan and Armenia, demanding that the two governments return the captives. In Georgia, anti-government demonstrations over the curfew hours imposed as a result of the coronavirus pandemic increased, as did pro-government protests. In Kyrgyzstan, activists protested against bride kidnapping, a traditional practice which they believe promotes violence against women.

In Afghanistan,1ACLED is currently conducting a review of sourcing and reporting of the conflict in Afghanistan from 2020. clashes between Afghan forces and the Taliban took place mainly in Kandahar province last week, similar to previous weeks. Afghan forces also conducted ground and air operations in many regions, clearing Arghandab district of Kandahar province and parts of Taywara district, Ghor province of Taliban militants. At the same time, the Taliban captured a key military base in Nahri Saraj district of Helmand, another province with a high activity level. The Taliban also overran more Afghan bases and checkpoints in the Ghoryan district of Herat province and Sar-e Pol province.

Meanwhile, the Taliban claims to have shelled a NATO base in Kandahar province last week, though no casualties were reported. The US retaliated by launching airstrikes against the Taliban in the province, inflicting around 60 casualties. The last time the Taliban conducted such an attack was in February 2020, shortly before the US-Taliban deal was signed. The group agreed to end its attacks against international troops at that time (RFE/RL, 7 April 2021).

These tensions occurred at a time when the US troops’ withdrawal from Afghanistan, set by the US-Taliban deal, was less than two weeks away. However, earlier this week, US officials announced that all US troops in the country will be withdrawn by 11 September 2021 (The Washington Post, 13 April 2021). The decision comes after weeks of speculation about US negotiations with the Taliban, with differing opinions amongst American lawmakers and intelligence agency reports advising for and against extended US presence in Afghanistan (New York Times, 4 April 2021; VOA, 13 April 2021). Meanwhile, a nationwide ceasefire and a power-sharing agreement between Afghan forces and the Taliban was to be discussed at the Istanbul Conference on 16 April (Afghanistan Analysts Network, 1 April 2021). However, as the Taliban has stated that the group has not yet finalized its agenda for the summit, and has refused to attend the conference on the proposed date (Al Jazeera, 13 April 2021), the conference has been rescheduled for 24 April (Anadolu Agency, 13 April 2021). However, it is unlikely that the Taliban will be cooperative given that the group believes it has gained leverage over the Afghan forces that will soon lack US support (New York Times, 13 April 2021).

Along the Armenia–Artsakh–Azerbaijan Line of Contact, five Azerbaijani servicemen were injured by landmines last week in the Kashatagh and Martakert regions of the de facto Artsakh Republic, which are now under the control of Azerbaijan. Since the end of the Artsakh (Nagorno-Karabakh) War on 10 November 2020, ACLED records at least 26 landmine explosions in the region, resulting in 19 reported fatalities, including 13 civilians. Azerbaijan blames Armenian authorities for not providing them with the maps of planted landmines, while Armenia claims that Azerbaijan makes such demands as a bargaining tool in exchange for Armenian prisoners of war (POWs) (Eurasianet, 9 April 2021).

Meanwhile, in both Azerbaijan and Armenia, relatives of missing soldiers from the war protested last week, calling on their governments to take urgent steps towards finding the soldiers. Protesters gathered in Baku for two days in a row, claiming that their relatives are in captivity in Armenia as POWs. Similar protests took place in Armenia by the relatives of POWs and missing soldiers. In Yerevan, a group of demonstrators tried to break into the Ministry of Defense headquarters, demanding a meeting with high-ranking government officials. Demonstrators also blocked highways and railways leading to the Shirak region as many POWs were from there (A1+, 9 April 2021).

In Georgia, anti-government protests against curfew hours imposed due to the coronavirus pandemic on 28 November 2020 increased last week.  The increase is related to an event that took place on 7 April where four residents of the de facto Abkhazia Republic drowned when crossing a river to enter Georgian territory illegally, in order to avoid the five-day quarantine imposed on Abkhazians (RFE/RL, 7 April 2021). The rule was previously criticized as discriminatory towards the residents of the breakaway Georgian state, and was lifted by the government earlier this week (JAM News, 14 April 2021).

Meanwhile, elsewhere in Georgia, demonstrators gathered for pro-government rallies, with the largest one being organized in Tbilisi by a former singer and politician, Utsnobi (Gia Gachechiladze) (JAM News, 9 April 2021). The demonstration featured anti-opposition messages and conservative rhetoric, such as the need to protect the Georgian Orthodox Church and traditional values in general (RFE/RL, 9 April 2021).

Since Georgia has been in the grip of a political crisis after parliamentary elections in October 2020, opposition groups have organized many anti-government protests in recent months. However, last week’s increased pro-government protest activity might be partly explained by the Georgian ruling party’s attempts to create demonstration leverage. Reportedly, the regional municipal authorities organized transport for state employees to the pro-government demonstration in Tbilisi last week (OC Media, 9 April 2021).

Lastly, in Kyrgyzstan, activists demonstrated in several cities last week, including in Bishkek and Osh, against bride kidnapping and violence against women in the country. Demonstrations were sparked by a 27-year-old woman being kidnapped on 5 April in Bishkek. She was found dead in the city’s outskirts some days later (RFE/RL, 8 April 2021). The abduction of women for marriage is illegal yet widespread in the country. Some view it as a tradition, which often leads to marital rape and domestic violence (BBC, 12 December 2012). The Kyrgyz government has previously come under criticism from international rights groups for its failure to protect women’s rights and enforce relevant laws (HRW, 28 May 2019).