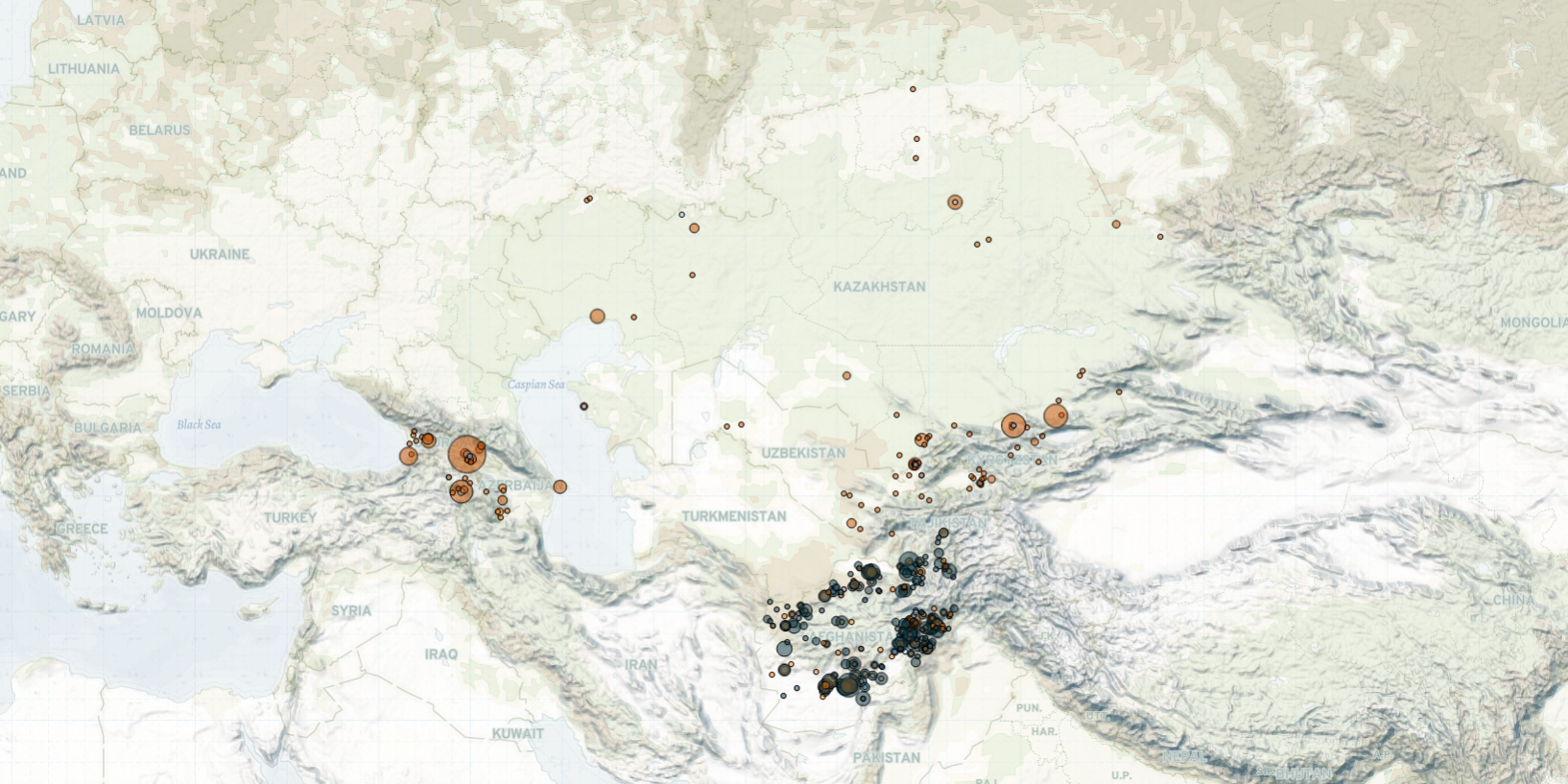 Last week in Central Asia and the Caucasus, Taliban and Afghan forces clashed across the country. Meanwhile, NATO troops announced a withdrawal plan from the country, similar to the US, as an upcoming peace summit was postponed. Casualties from landmine explosions were reported along the Armenia-Artsakh-Azerbaijan Lines of Contact. In Armenia, the families of the prisoners of war from the 2020 Artsakh (Nagorno-Karabakh) War demonstrated. In Georgia, protests over the construction of a hydropower plant resulted in meetings between the protesters and the government. Lastly, in Kyrgyzstan, a new constitution was approved by a controversial referendum.

In Afghanistan,1ACLED is currently conducting a review of sourcing and reporting of the conflict in Afghanistan from 2020. Afghan forces ramped up air and ground operations, claiming to have inflicted over 100 fatalities on the Taliban. Fighting was reported mainly in Kandahar, Helmand, Kunduz, and Urozgan provinces. Additionally, in Sozma Qala district of Sar-e Pol province, a road blocked by the Taliban was reopened during intense clashes in which 19 Taliban were killed. The Taliban also targeted Afghan forces, leading to fierce clashes, the most lethal of which took place in Herat, Wardak, Balkh, and Zabul provinces. The Taliban used suicide attacks with car bombs in the Shindand district of Herat and Shah Joi district of Zabul.

Additionally, there were a number of attacks targeting civilians in Afghanistan last week, often perpetrated by unknown groups. The Taliban also claimed that Afghan airstrikes and shelling caused civilian casualties in Balkh, Kunar, and Nangarhar provinces.

In a separate development, NATO forces announced that their troops would withdraw from the country within a few months, following the recent decision of the US to pull out its troops on 11 September 2021 (AP, 14 April 2021). The news led Afghan politicians to raise concerns about a potential “civil war” if a political agreement between the Taliban and the Afghan government is not achieved soon (TOLO News, 19 April 2021). Meanwhile, the long-awaited peace summit in Turkey was once again delayed this week until after Ramadan, as the Taliban refused to join for a second week (Al Jazeera, 21 April 2021). The Taliban did not share any specific reason for their refusal, but the group has previously stated that they would not attend any summit until all foreign forces withdraw from Afghanistan (Reuters, 21 April 2021).

Along the Armenia-Artsakh-Azerbaijan Lines of Contact, one Armenian serviceman was injured by a landmine in the Jabrail region in the Azerbaijani-controlled part of the de facto Artsakh Republic. The soldier was searching for missing servicemen from the 2020 Artsakh (Nagorno-Karabakh) War.

In Armenia, protests calling for the return of prisoners of war and missing servicemen during the 2020 Artsakh (Nagorno-Karabakh) War continued in Yerevan. On 13 April, demonstrators blocked the entrance of the Shirak region’s Administrative building in Gyumri city, demanding a meeting with Prime Minister Nikol Pashinyan about the prisoners. The entrance remained blocked for over a day, despite police interventions that resulted in clashes with the demonstrators. After a meeting with government representatives, the unrest ended. The issue is likely to impact the parliamentary elections in June 2021 (RFE/RL, 11 April 2021).

In Georgia, protests took place last week against the construction of the Namakhvani hydropower plant (HPP) in Tbilisi, Poti, and Kutaisi cities, and across several towns of the Imereti region where the HPP is located. Last week, government representatives agreed to meet with the protesters on 16 April, although no concrete results were reached (Civil Georgia, 16 April 2021). This is the first time protesters met with government officials since the protests began in October 2020 against the HPP’s potential impacts on the environment and local livelihoods (JAM News, 5 March 2021).

In Kyrgyzstan, on 11 April, local elections were held along with the constitutional referendum. The voters were asked if they approved the new constitution following the country’s shift to a presidential system back in January 2021 (The Diplomat, 6 April 2021). With a turnout of over 37 percent, over 79 percent of voters approved the new constitution, which equips President Sadyr Japarov with expanded powers, such as the ability to appoint all judges and heads of law enforcement agencies (Eurasianet, 11 April 2021). As a result, opposition parties protested in Bishkek and Osh, demanding that the country’s Central Election Commission annul the election results due to voter fraud allegations (RFE/RL, 12 April 2021), though critics note that the opposition’s concerns about the elections and the new constitution may result in future unrest (RFE/RL, 13 April 2021). In addition, a journalist and an election monitor were reportedly attacked by unknown assailants in Osh for filming election code violations at polling stations, resulting in calls for Kyrgyz authorities to investigate attacks on journalists during elections and the referendum (CPJ, 13 April 2021).