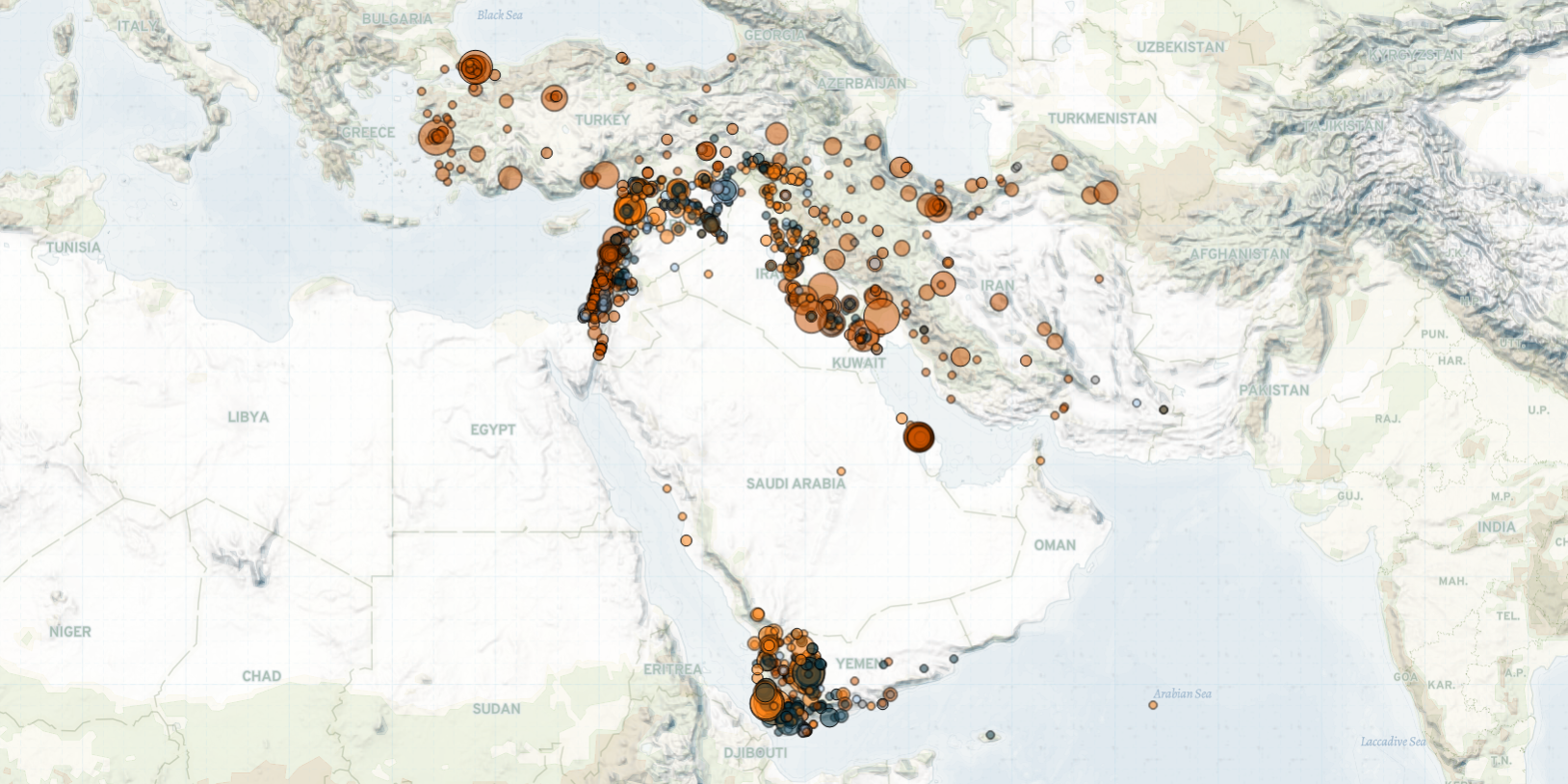 In Yemen, Marib remains the focal point for conflict between Houthi and pro-Hadi forces. Relative to the previous week, the governorate saw an uptick in violence. This was driven by an increase in armed clashes, with the majority of violence concentrated in the Sirwah district. According to pro-Houthi sources, Houthi forces continued their advance on Marib city, capturing Dush al Khashab and Hammat ad Dayrah, both of which are roughly 10 km north of Marib City (Hayrout, 15 April 2021; Twitter, 15 April 2021).

In Bahrain, demonstrations continued throughout the week against the ongoing detention of prisoners in Jaw Central Prison amid a COVID-19 outbreak at the facility. However, demonstrations declined last week by over 50%, possibly as a result of the government partially acquiescing to the demands of protesters by releasing 150 prisoners on 10 April (Middle East Eye, 10 April 2021). Yet, protests were still significantly higher than anytime in the past year. Sustained demonstrations throughout the week indicate that the government’s actions have failed to meet the demands of activists.

In Syria, HTS clashed with members of an unidentified Islamist armed group in Kafr Deryan in the western Idleb countryside, killing two foreign members of the faction and detaining several others. The Islamist group is accused of having previously kidnapped and killed the minister of higher education in the Salvation Government. In Idleb city and its surrounding areas, HTS continued its security campaign against Hurras Al Deen and other Islamist groups, detaining a Hurras Al Deen commander along with his wife and children from their house. Elsewhere, an IED went off near Afrin’s Turandah, killing a civilian and wounding three others. In the northern Aleppo countryside, Russian forces withdrew from two bases in Tell Refaat and Kashtaar areas and headed toward Aleppo city. There was no official statement from Russian forces about these withdrawals, though they may be related to ongoing negotiations between Turkey and Russia.

In Iraq, unknown militants carried out a drone attack on 14 April targeting US forces at Erbil International Airport. The militants landed a drone laden with TNT near a hangar inside the airbase section of the airport before detonating it. Only material damages occurred; flights resumed the next day (Al Jazeera, 15 April 2021). Elsewhere, Islamic State (IS) members detonated what is suspected to be a suicide vehicle-borne IED in the predominately Shiite Al Ataka market in Baghdad’s Sadr City. The attack killed five, including the attacker, and injured 20. Five vehicles were also destroyed (Reuters, 15 April 2021).

Lastly, an explosion at Natanz nuclear facility in Iran destroyed its internal power system and damaged thousands of uranium enrichment centrifuges, according to the head of Iranian parliament’s research center (Times of Israel, 20 April 2021). Citing two unnamed American and Israeli intelligence officials, the New York Times (11 April 2021) reported that Israel had played a role in the attack. Experts suggest that Israel carried out the attack — likely through a remotely detonated device smuggled into the facility (Jerusalem Post, 13 April 2021) — to undermine the Biden administration’s effort to rejoin the nuclear deal with Iran (New York Times, 12 April 2021). Natanz nuclear facility was also the site of a previous incident in July 2020. The former head of Iran’s Atomic Energy Organization revealed last week that the blast was caused by explosives hidden inside a table (BBC, 12 April 2021). Inside Iran, many blame Israel also for the July incident (France24, 12 April 2021). For years, Israel has carried out covert operations against the Iranian nuclear program, including assassinations of its nuclear scientists (The Guardian, 27 November 2020).