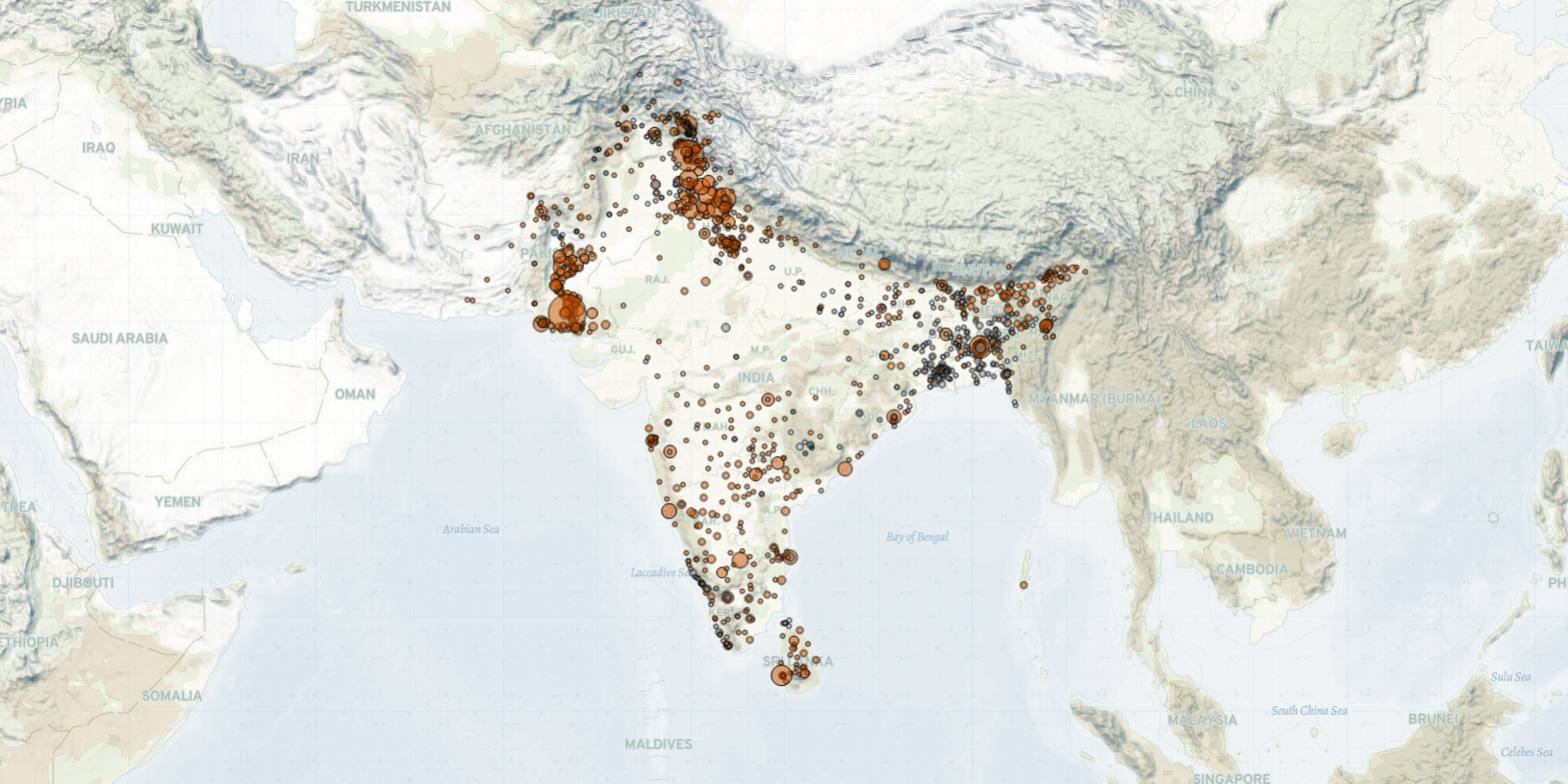 Last week in South Asia, military forces and domestic militants clashed in Jammu and Kashmir (J&K) union territory in India. Naxal-Maoist rebels have continued targeting security forces in Chhattisgarh state. The state assembly and local elections in several Indian states were conducted amid rival party clashes, targeted attacks, and election irregularities. Finally, violent clashes broke out between an Islamist party and security forces in Pakistan, after the former intensified their dissent against France over caricatures from November 2020 depicting the Prophet Muhammad.

In India’s J&K, security forces conducted operations against domestic militants last week. Five members of the Islamist groups Hizb-ul-Mujahideen and Al-Badr were killed in three separate encounters in Southern Kashmir during a joint operation by the Rashtriya Rifles and Central Reserve Police Force. In addition, some encounters and cross-border firing incidents were reported along the Line of Control (LoC). Military forces exchanged fire with unidentified armed groups and individuals who reportedly tried to cross the Indian border from Pakistan. Indian and Pakistani troops have been observing a ceasefire along the LoC and their International Border (IB), following their joint statement on 25 February earlier this year (The Hindu, 26 February 2021). Despite last week’s encounters along the LoC, no tensions were reported between the two countries, who are to meet again in Pakistan this month to discuss their relationship (Radio France International, 13 April 2021).

Meanwhile, Naxal-Maoist rebels remained active in Chhattisgarh state last week after the prior week’s deadly ambush of security forces. Last week, the Communist Party of India (Maoist) clashed with police in Bastar division of Chhattisgarh, known as the Maoist heartland. A Maoist commander died in the encounter and several other rebels were injured or killed. Naxal rebels abducted three female health workers engaged in coronavirus vaccinations from Bijapur district, though they were later released. Police forces recovered and defused IEDs planted by militants in at least three locations across Chhattisgarh. In the meantime, the Communist Party of India (Maoist) issued press statements and put up posters asking their forces to launch more attacks on police (The Free Press Journal, 10 April 2021). The rebels aim at continuing the momentum from 3 April, when they ambushed and killed at least 22 security forces. Maoists have also called for a general shutdown strike on 26 April to protest against the killing of four of their cadres by police on 16 March in Bihar state (Times of India, 12 April 2021).

Elsewhere in India, electoral violence continued during and after the state assembly and local elections. Five people died in two separate incidents in Cooch Behar district during the fourth phase of the assembly elections in West Bengal state. Paramilitary troops guarding a poll station opened fire and killed four rioters, who had surrounded them and tried to snatch their weapons (Deutsche Welle, 10 April 2021). Poll authorities banned political leaders from entering the district for the next 72 hours to quell the tensions (Hindustan Times, 11 April 2021). The major political rivals — the Trinamool Congress Party (TMC) and the Bharatiya Janata Party (BJP) – engaged in stone pelting, attacks, and clashes in other districts in West Bengal as well.

In Kerala, suspected members of the Hindu nationalist party Rashtriya Swayamsevak Sangh (RSS) killed a student member of their opponent Communist Party of India (Marxist), shortly after the state assembly elections concluded. The local elections in Uttar Pradesh took place amid violence over rigged voting and looting of ballot boxes. A BJP leader was shot and seriously injured in Kannauj district after returning from poll campaigning.

Lastly, in Pakistan, demonstrations took place in multiple cities after the far-right Islamist party Tehreek-e-Labbaik Pakistan (TLP) chief was detained. A day before the detainment, the TLP had warned the government that if the French ambassador is not expelled from Pakistan, they would stage a protest march to Islamabad from Lahore on 20 April (The Express Tribune, 20 April 2021). Demonstrations erupted in all provinces and led to the blocking of major roads. Members of the party clashed with police in several major cities, including Karachi and Lahore, leading to the death of at least seven people, including at least one police officer. The TLP has been agitating the public since November, alleging blasphemy by French President Emmanuel Macron over his defense of caricatures of the Prophet Muhammad (Al Jazeera, 14 April 2021; BBC News, 17 November 2020). As a result of the violent clashes, Pakistan’s government has decided to ban the TLP party, while France has called on its citizens to temporarily leave Pakistan, citing security concerns (Al Jazeera, 14 April 2021; BBC News, 15 April 2021).

Katerina Bozhinova is the South Asia Assistant Research Manager at ACLED. She holds a BA in Political Science and International Relations and an MSc in Sustainable Resource Management. Her research interests include land rights and environmental governance and policy.
21 April 2021
Share
TweetShare on Twitter Share on FacebookShare on Facebook Share on LinkedInShare on LinkedIn

Katerina Bozhinova is the South Asia Assistant Research Manager at ACLED. She holds a BA in Political Science and International Relations and an MSc in Sustainable Resource Management. Her research interests include land rights and environmental governance and policy.