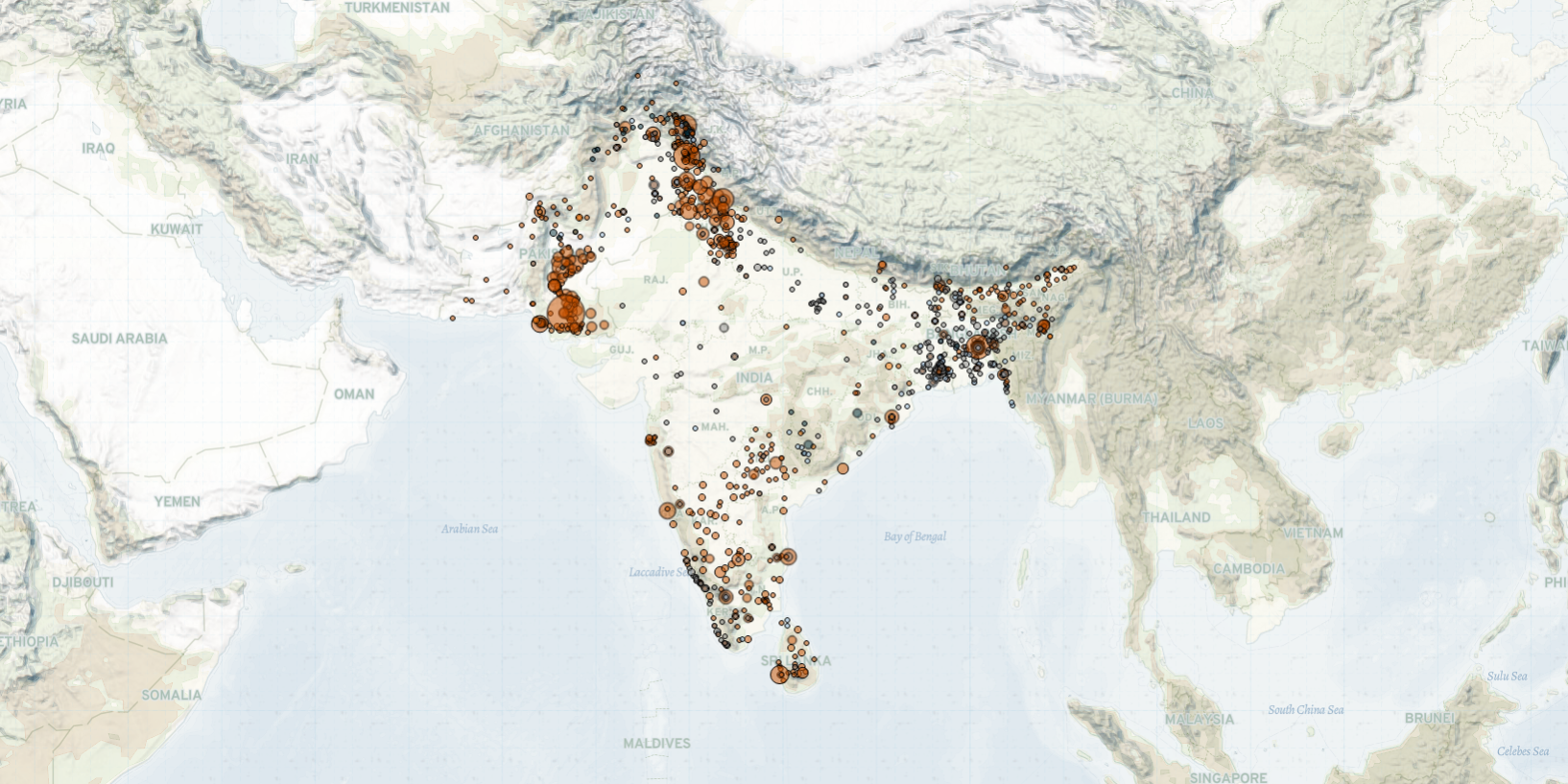 Last week in South Asia, Taliban militants took responsibility for a suicide bombing attack in Balochistan province in Pakistan. An Islamist party continued to demonstrate against France over caricatures of the Prophet Muhammad from November 2020, leading to clashes with the police. In India, Naxal-Maoists targeted civilians over their alleged cooperation with police and development activities. Electoral violence and political rival clashes continued in West Bengal and Uttar Pradesh states. Mob violence incidents were reported amid increasing coronavirus infections and lockdown measures in India. Finally, in Bangladesh, police killed at least seven workers demonstrating over labor issues at a power plant.

In Pakistan, a suicide bomb explosion at a parking lot of a hotel in Balochistan’s capital Quetta killed at least five people and injured at least a dozen. Initial reports suggested that China’s ambassador to Pakistan was the target of the bombing (The Eurasian Times, 23 April 2021). According to the Interior Minister of Pakistan, the ambassador was staying at the hotel, but was not present during the explosion (Reuters, 22 April 2021). Tehreek-i-Taliban Pakistan (TTP) took responsibility for the bombing and claimed that police officers and other government officials were the target, without mentioning the Chinese delegation (Reuters, 22 April 2021; BBC, 23 April 2021). The attack signals that the TTP may be shifting away from remote tribal areas to Pakistan’s cities. It also raises questions about TTP’s strategy as Balochistan falls outside the operational domain of the Pakistani Taliban (The Diplomat, 22 April 2021). Last month, TTP also claimed responsibility for a bomb attack in Chaman city in Balochistan that targeted security forces and left three people dead.

Elsewhere in Pakistan, far-right Islamist party Tehreek-e-Labbaik Pakistan (TLP) continued demonstrations against the arrest of their leader and clashed with police. Violence broke out between members of the banned party and police in Lahore city, as the TLP blocked roads and surrounded a police station (Deutsche Welle, 18 April 2021). Three people were killed and hundreds of others, including police officers, were injured. Eleven security personnel were abducted and released a day later after negotiations with the government. The far-right Islamist party has denounced the French government over defending the right to publish caricatures depicting the Prophet Muhammad from November 2020. They have since demanded the expulsion of the French ambassador from Pakistan.

In India, Naxal-Maoist violence increased in the Red Corridor compared to the week prior. Rebels engaged in targeting civilians and construction workers. In Chhattisgarh state, Maoists killed two students, a government official, and a construction laborer over alleged cooperation with police and their involvement in development projects. Construction and road connectivity development is considered disadvantageous to their surprise attack tactics (The New Indian Express, 21 March 2021). Naxal-Maoist rebels have been gaining traction before the general shutdown strike on 26 April, which they announced would be held to protest the killing of Maoists during a police operation on 16 March in Bihar state (Times of India, 12 April 2021). Security forces ramped up operations to prevent more civilian attacks. Police teams clashed with Communist Party of India (Maoist) in Odisha and Chhattisgarh, killing a commander and another rebel.

Electoral violence continued during the ongoing state assembly elections in West Bengal state and the local polls in Uttar Pradesh state. At least five people, including members and supporters of the main political rivals the Trinamool Congress Party (TMC) and the Bharatiya Janata Party (BJP), were killed during clashes and targeted attacks in West Bengal. Despite the rising number of coronavirus cases in the state, high voter turnout and clashes between the BJP and TMC have continued (The Hindu, 18 April 2021). In Uttar Pradesh, a candidate for the local panchayat elections was killed during an exchange of fire with a rival. Rioters attacked polling booth officers, voters, and police over allegations of fake voting in several locations in the state.

As a record high number of daily COVID-19 cases were reported in India last week, several incidents of coronavirus-related violence took place across the country (Foreign Policy, 23 April 2021). Locals and street vendors assaulted police teams who tried to prevent gatherings and to enforce new lockdown measures in Maharashtra, Madhya Pradesh, and Uttar Pradesh states. Health workers were attacked while trying to perform examinations and vaccination campaigns in Uttar Pradesh and Maharashtra. Violence against police and health workers was also common during the nationwide lockdown last year (for more on political disorder during the first wave of the pandemic in India, see this ACLED piece).

Lastly, in Bangladesh, police opened fire at demonstrating power plant employees, killing at least seven of them in Gandamara town. The workers were demonstrating over unpaid wages and demanding reduced hours during the holy month of Ramadan (Reuters, 17 April 2021). Following the incident, political parties, labor organizations, and activists across the country staged peaceful protests, calling for justice for the victims and arrests of the police officers engaged in the clashes. In 2016, at least three people were killed by police trying to pacify demonstrators who argued over the construction of the same power plant. Those killed had defied acquisition of their land by the plant owner (New Age, 27 April 2021). The power plant is among the major foreign investments by China, which has initiated a series of projects to build closer ties with Bangladesh (Reuters, 17 April 2021).

Katerina Bozhinova is the South Asia Assistant Research Manager at ACLED. She holds a BA in Political Science and International Relations and an MSc in Sustainable Resource Management. Her research interests include land rights and environmental governance and policy.
28 April 2021
Share
TweetShare on Twitter Share on FacebookShare on Facebook Share on LinkedInShare on LinkedIn

Katerina Bozhinova is the South Asia Assistant Research Manager at ACLED. She holds a BA in Political Science and International Relations and an MSc in Sustainable Resource Management. Her research interests include land rights and environmental governance and policy.