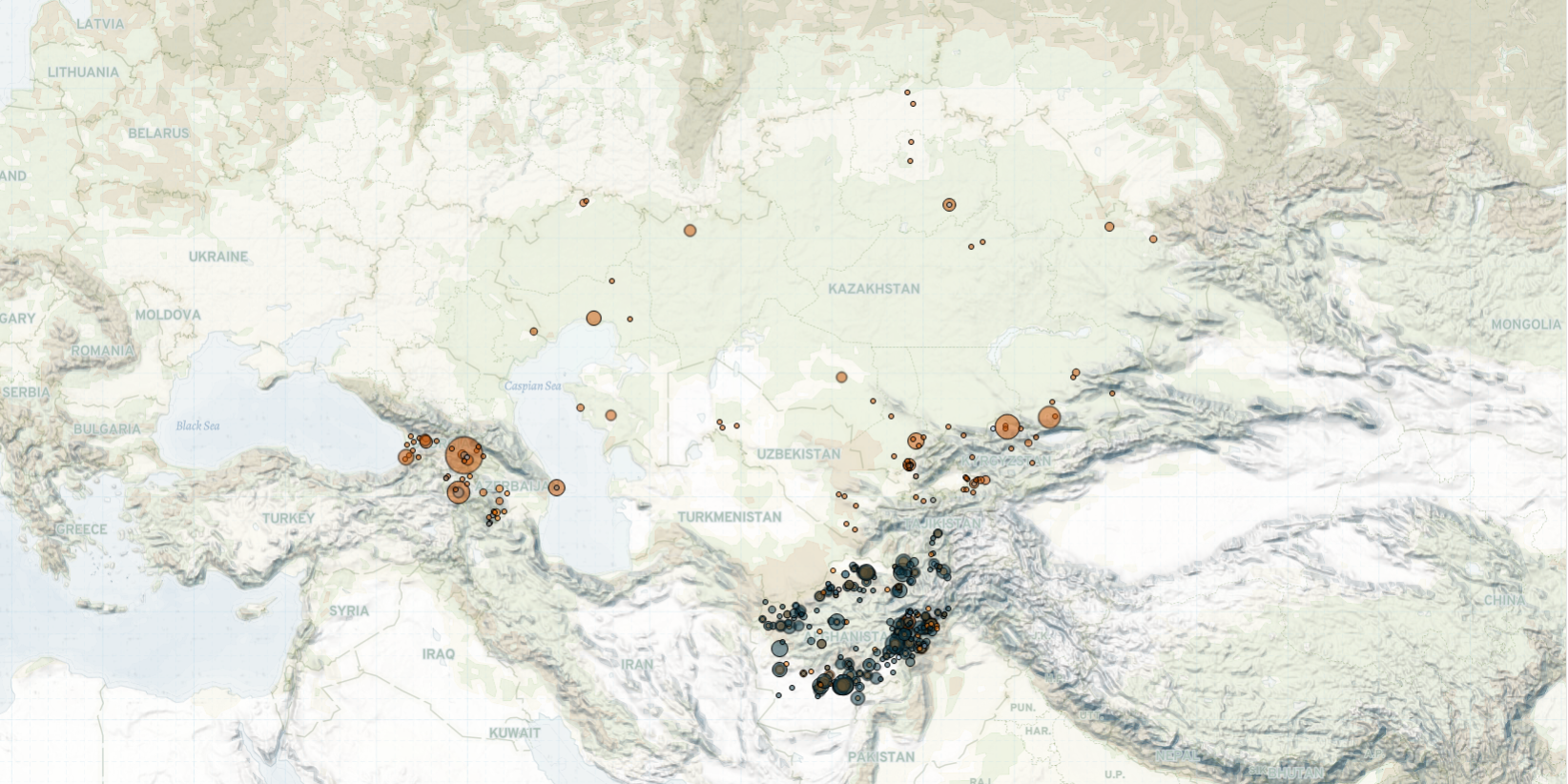 Last week in Central Asia and the Caucasus, clashes between the Taliban and Afghan forces continued in Afghanistan. The Islamic State (IS) also surfaced in the country, targeting civilians in Ghor province, where the group has rarely shown a presence. Along the Armenia-Artsakh-Azerbaijan Lines of Contact (LoC), accusations of ceasefire violations were reported by both sides of the conflict. Remnant landmines from the 2020 Artsakh (Nagorno-Karabakh) War caused civilian casualties similar to past weeks. In Armenia, the prime minister’s visit to the southern Syunik region triggered unrest among locals worried about the increasing presence of Azerbaijani forces in neighboring provinces. In Central Asia, locals expressed concerns about the division of water resources across the Kazakh-Russian, Kyrgyz-Tajik, and Tajik-Uzbek borders.

In Afghanistan,1ACLED is currently conducting a review of sourcing and reporting of the conflict in Afghanistan from 2020. violence between Afghan forces and the Taliban was mainly concentrated in Ghazni province last week, followed by Herat and Kandahar provinces. Afghan forces launched a number of air and ground operations, killing dozens of Taliban militants across 18 provinces. The Taliban also conducted lethal attacks on Afghan forces and took control of areas in Chaghcharan city of Ghor province, a military base in Pul-i-Khumri district of Baghlan province, and some checkpoints in Shah Joi district of Herat province. In the Ghoryan district of Herat province, the Taliban used a suicide attack with a car bomb to destroy a building used by police forces. Twelve civilians were also wounded in the attack. Two more suicide attacks took place last week by unidentified militants in Kandahar and Kabul cities, targeting police and intelligence forces.

In a separate development, an IS militant, reportedly the military chief of Pachir Wa Agam and Haska Mina districts of the Nangarhar province, was killed by Afghan National Directorate of Security (NDS) in the Kuzkunar district of Nangarhar. Afghan forces, mainly the NDS, have conducted over a dozen operations in 2021 targeting IS. Last week, IS killed four Hazara community members in the Dawlatyar district of Ghor province, marking the first attack the group has conducted in Ghor since October 2017. IS attacks have been on the rise since early 2021, compared to the same period in 2020, and have mainly taken place in Nangarhar and Kabul.

Along the Armenia-Artsakh-Azerbaijan LoC, one Azerbaijani and one Armenian civilian were hit by a landmine while conducting agricultural activities. Additionally, Armenia and Azerbaijan accuse each other of ceasefire violations. Artsakh authorities report that on 20 April, Azerbaijani forces opened fire on Stepanakert, the villages of Shosh, and Mkhitarashen (Artsakh Ministry of Foreign Affairs, 22 April 2021). Meanwhile, Azerbaijan reports that Armenian forces fired towards their border forces located in Seidlyar village of the Zangilan region, near the Azerbaijani-Armenian border. The report adds that Armenian troops also fired on the positions of Russian peacekeepers in the region last week (JAM News, 22 April 2021).

In Armenia, Prime Minister Nikol Pashinyan’s visit to the southernmost Syunik region resulted in discontent among locals who hold Pashinyan responsible for Armenia’s territorial losses in the 2020 Artsakh (Nagorno-Karabakh) War. A number of demonstration events took place in different parts of the region last week as demonstrators blocked roads and threw eggs at Pashinyan’s convoy. Many people were arrested, which provoked opposition demonstrations in Yerevan in support of the Syunik demonstrators. The region borders Azerbaijan’s exclave, the Nakhchivan Autonomous Republic, in the west. To the east, it borders the Zangilan and Gubadly districts of the de facto Artsakh Republic, which were largely captured by Azerbaijan during the 2020 war, leading Armenian forces to withdraw (RFE/RL, 21 April 2021). Syunik residents have been concerned about their security since then and held similar demonstrations in December 2020 during another visit by Pashinyan.

In Central Asia, several border riots and protests broke out last week. In Kazakhstan’s Atyrau region, bordering Russia, Kazakh authorities began building a fence to demarcate the border  with Russia, about 10 percent of which was still to be completed (Sputnik News, 19 April 2021). However, the residents of a village on the border, Koptogai, protested, claiming that the demarcation was cutting their access to a nearby river, depriving them of drinking and irrigation water. After the protest, the authorities suspended the demarcation work (Eurasianet, 19 April 2021).

Meanwhile, violence erupted on the Kyrgyz-Tajik border. In the Ak-Sai village of Kyrgyzstan’s Batken region, right next to the Vorukh exclave of Tajikistan, a group of Tajik villagers threw stones at Kyrgyz employees working at the Golovnoy water collector. The demonstrators, concerned about the distribution of water resources in the region, claim that any work at the site should be conducted jointly. This is the ninth Tajik-Kyrgyz border-related event ACLED records in 2021. Kyrgyzstan and Tajikistan have been discussing a potential land swap in the region since early-2020. This has not yet been finalized and is thus causing problems for local populations that depend on water resources for their agriculture and grazing activities (The Diplomat, 15 January 2020).

On the Kyrgyz-Uzbek border, protests took place in the Kara-Suu and Ozgon districts of Osh Province, Kyrgyzstan, as the residents of two border villages oppose a land swap between Uzbekistan and Kyrgyzstan. As these lands are near the Kempir-Abad water dam, locals, who had also protested for the same reason in early April 2021, raised concerns about potential disruptions to water distribution after such a land swap. By the end of March 2021, Uzbek and Kyrgyz officials announced that they had come to an agreement on the final demarcation of the border, and Kyrgyzstan’s security chief said the problem was fully resolved (Eurasianet, 26 March 2021). However, shortly after, Kyrgyz authorities claim that no consensus was made about the water resources in another border village, Chechme, raising doubts about the agreement’s effectiveness (KNews, 30 March 2021).