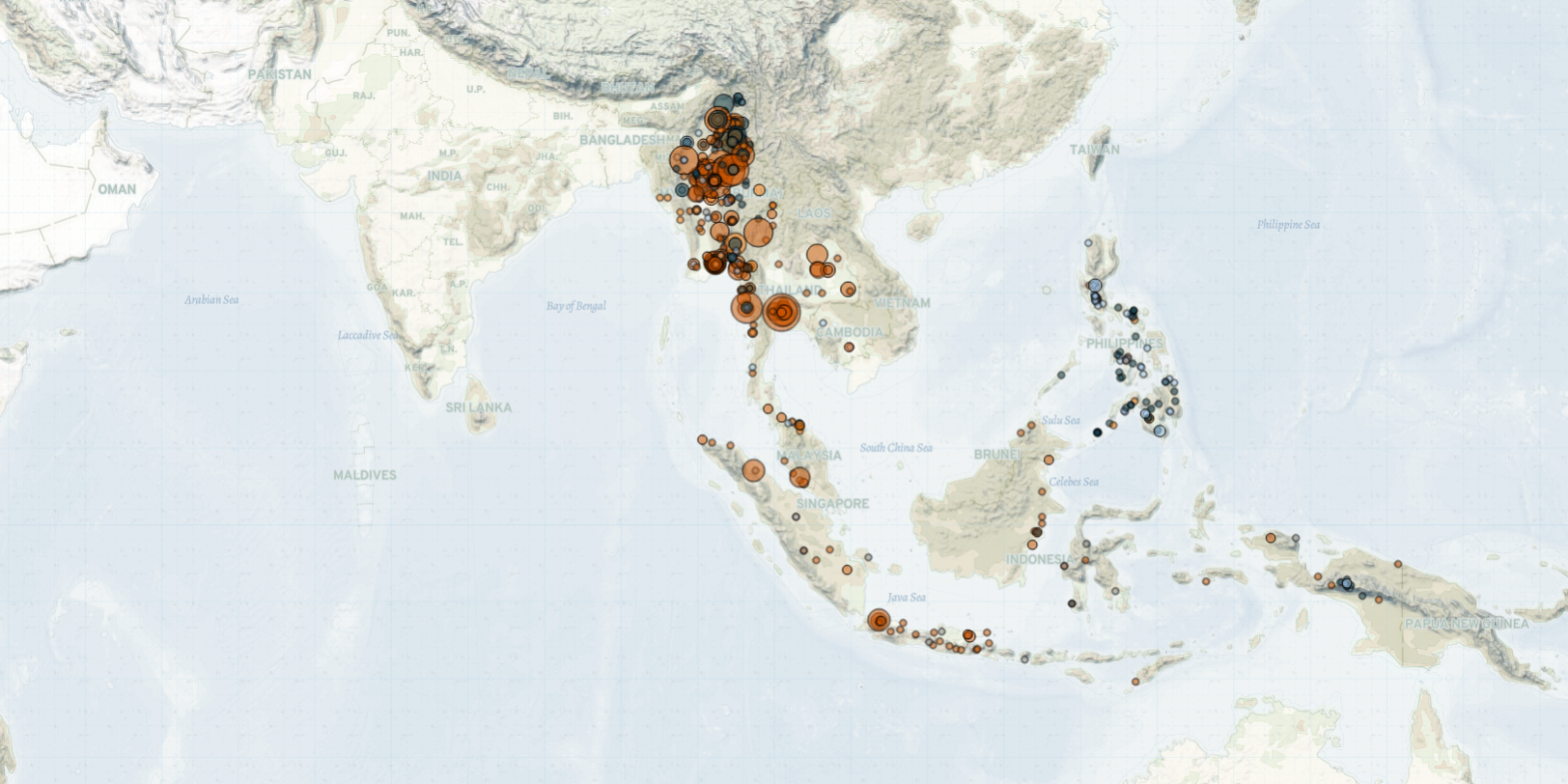 Last week in Southeast Asia, anti-coup protesters in Myanmar demonstrated in opposition to the consensus reached by Association of Southeast Asian Nations (ASEAN) leaders and Myanmar’s military chief during a meeting on 24 April. Meanwhile, there was an increase in reports of explosives being used to attack government and military infrastructure in the country. Additionally, fighting between the Myanmar military and newly formed armed resistance groups increased in Sagaing region and Chin state. Tensions also continue to remain high in Kayin and Kachin states as ethnic armed organizations (EAOs) clash with the military over control of strategic bases. In Indonesia, fighting between Papuan separatists and state forces increased last week after the rebels shot dead a high-ranking intelligence official. Meanwhile, a diplomatic spat between the Philippine and Chinese governments over disputed territory in the South China Sea continues to escalate as both sides attempt to assert their sovereignty over the region. In Thailand, anti-government protests continued unabated amid reports of the deteriorating health of detained protest leaders. Lastly, in Malaysia, protesters continue to demand that the state of emergency be lifted.

In Myanmar, demonstrations against the military coup, which have been ongoing for nearly three months, continued across the country. Following the ASEAN leaders’ meeting on 24 April, anti-coup demonstrators expressed their opposition to the “five-point consensus” that ASEAN leaders and the Myanmar military’s leader came to at the meeting (ASEAN, 24 April 2021). The consensus calls for an immediate end to the violence in Myanmar, and a restoration of dialogue between all concerned parties towards a peaceful solution. However, anti-coup supporters have criticized the consensus for failing to “reflect the views and voices of the Myanmar people” (Straits Times, 26 April 2021). They also demand the release of all political prisoners — a point not included in ASEAN’s five-point consensus.

Meanwhile, attacks on government buildings and military bases using improvised explosives are being reported with increasing frequency. Notably, two air force bases were hit by improvised rockets in Magway and Mandalay regions in central Myanmar — where such attacks on military facilities are rare. The military later stated that there were no casualties and only minor damage to one of the buildings (Channel News Asia, 29 April 2021). Additionally, dozens of explosions caused by improvised explosives were reported across Myanmar, targeting government buildings, banks, schools, and universities. No one has yet claimed responsibility for these attacks.

Elsewhere, tensions between the Myanmar military and EAOs continued to escalate. In Kayin state, the Karen National Union/Karen National Liberation Army (KNU/KNLA) attacked and captured a military base near the Myanmar-Thai border, killing several Myanmar military soldiers (DW, 27 April 2021). In response, the Myanmar military mounted airstrikes against KNU/KNLA positions, displacing many Kayin villagers. As well, hundreds of Thai villagers living near the border were forced to evacuate amid the increased instability (RFA, 27 April 2021). Separately, in Kachin state, the Kachin Independence Organization/Kachin Independence Army (KIO/KIA) continued to defend its position at the strategic hilltop of Alaw Bum, as the Myanmar military intensified its airstrikes in an attempt to recapture the base which was recently seized by the KIO/KIA.

In West Papua, Indonesia, there was a spike in clashes between Papuan separatists and state forces following the killing of the Papua province State Intelligence Agency chief during an ambush by the West Papua National Liberation Army (TPNPB) on 25 April. The incident elicited a strong reaction from the government, with President Joko “Jokowi” Widodo issuing an order for security forces to “chase and arrest all members [of Papuan rebel groups]” (Antara News, 26 April 2021). Following this, a series of battles broke out in Papua province, resulting in the death of at least one police officer. Amid these heightened tensions, the government, on 29 April, declared that Papuan rebels — which it refers to as “armed criminal groups” (KKB) — have been added to its list of “terrorist groups” (Jakarta Post, 29 April 2021). Human rights observers are concerned that this designation will lead to an increase in raids by security forces in West Papua. Such raids have often been accompanied by allegations of rights abuses against local civilians (Human Rights and Peace for Papua, 25 April 2021).

In the Philippines, tensions in the South China Sea continued to rise amid ongoing protests by Manila against the presence of Chinese vessels in the Philippine Exclusive Economic Zone (EEZ), particularly near the Whitsun Reef. Notably, the Philippine military announced that it conducted maritime drills in the Spratly Islands and the Scarborough Shoal. This led the Chinese Foreign Ministry spokesperson to assert Chinese sovereignty over the areas and to call on the Philippines to “stop actions complicating the situation” (Philippine Star, 28 April 2021). In response, the Philippines further protested the Chinese Foreign Ministry spokesperson’s remarks by filing yet another diplomatic protest (Philippine News Agency, 28 April 2021). On top of daily diplomatic protests against the presence of Chinese vessels in the Whitsun reef, Manila has already filed several protests to Beijing since March 2021 over the disputed maritime region. Amid these developments, external parties such as the European Union are also urging ASEAN to adopt a legally binding code of conduct to ease tensions in the region (Manila Bulletin, 24 April 2021).

In Thailand, anti-government demonstrations continued unabated as People’s Party members across the country protested in solidarity with protesters in Bangkok who have been demonstrating in front of the Supreme Court on a daily basis since March of this year. The overwhelming majority of demonstrations saw People’s Party members standing still in opposition to the lèse majesté law, which has been used to detain protest leaders. Tensions outside the Supreme Court also mounted last week as police intervened in the protests. The increase in tensions comes amid news of the deteriorating health of a protest leader, Parit Chiwarak, who has been on a hunger strike since 15 March to oppose the denial of bail for protest leaders by authorities. News about the detained protest leader’s health in custody has been closely watched by anti-government protesters. However, notwithstanding Parit’s hospitalization and the increasing protests, authorities continue to deny requests for bail to be granted (Reuters, 30 April 2021).

Finally, there was an increase in protests linked to coronavirus restrictions in Malaysia as the country struggles to contain the latest wave of infections. For the second week in a row, opposition and youth groups came together to demand that the state of emergency, which has been in place since January 2021, be lifted so that parliament can reconvene. Other than parliamentary sittings, all elections have also been suspended under the state of emergency. The imposition of the state of emergency is widely regarded as a political move by the government — which came into power without an election — to postpone elections and to remain in power (AP, 12 January 2021). Additionally, several protests against ongoing restrictions on movement were held in Tawau city, Sabah state, which has been hit particularly hard by the pandemic. For more on how state leaders around the world have used powers, such as declaring states of emergency in response to the coronavirus pandemic, to bolster their positions and hold on power, see this recent report reviewing findings from ACLED’s COVID-19 Disorder Tracker project.