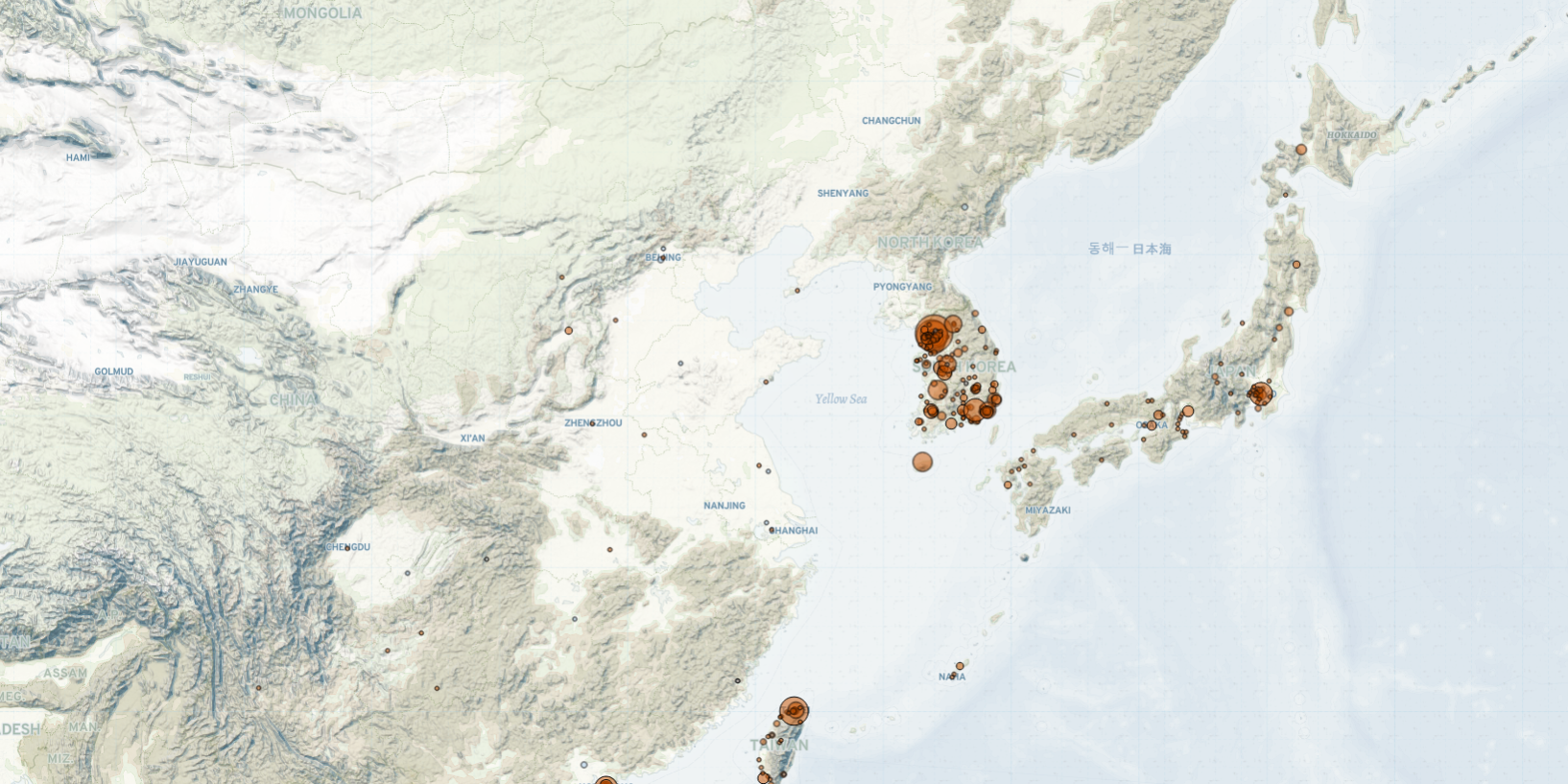 Last week in East Asia, labor unions across the region held rallies to mark May Day on 1 May. The North Korean authorities imposed lockdowns on some areas of the country in order to collect leaflets dropped by South Koreans criticizing the Pyongyang government. In Japan, demonstrations were held across the country to oppose revisions to the constitution. In Mongolia, five lawmakers from the minority opposition Democratic Party (DP) began a hunger strike as the electoral commission approved the presidential candidacy of a controversial DP member. In Hong Kong, the government ordered all foreign domestic helpers to undergo mandatory COVID-19 testing, prompting protests against the discriminatory nature of the order.

People took to the streets across East Asia to mark May Day or International Workers’ Day. Minor clashes between the demonstrators and police were reported in Taipei and Seoul. In Taiwan, around 3,000-5,000 workers from various industries marched through Taipei to demand a higher minimum wage and pension security (CNA, 5 May 2021; FTV, 1 May 2021). In South Korea, major labor unions took to the streets to urge authorities to improve workplace safety and to resolve social inequality (Yonhap News Agency, 1 May 2021). Despite the South Korean government’s assurance to do more to protect workers’ rights in response to the protests, labor activists announced a nationwide strike in the latter half of the year if changes in the working environment are not achieved (Dong-a Ilbo, 1 May 2021).

In Japan, workers’ groups affiliated with the two largest nationwide labor unions held marches across the country to demand wage increases and better working conditions amid the ongoing coronavirus pandemic. Many May Day rallies in Japan were reduced in size or canceled given the country’s recent resurgence of coronavirus cases (Tokyo Shimbun, 1 May 2021). Similarly, in Hong Kong, the annual Labor Day mass rally was canceled this year due to the pandemic. In lieu of a rally, pro-democracy groups organized street booths across the city to call for support for detained democracy activists.

On 26 and 27 April, the North Korean government ordered a 10-day lockdown of some areas in North Hwanghae, South Hwanghae, and South Pyongan province (Daily NK, 6 May 2021). The reason behind the lockdown is yet to be confirmed. However, it is assumed that the authorities imposed the lockdown in order to collect leaflets recently released via balloons from South Korea denouncing the North Korean government. The leaflets were sent by a North Korean defectors’ group, despite a recent amendment to a South Korean law that bans such actions. The law has been criticized by human rights groups who argue that the amendment restricts free speech at Pyongyang’s behest (Reuters, 30 April 2021). The North Korean government responded by calling the launches a “serious provocation” (NK News, 1 May 2021). This has raised concerns that North Korea might take further actions against South Korea. In June 2020, Pyongyang authorities blew up a joint liaison office in Kaesong used for talks between the two countries to show their discontent over a similar incident (CNN, 16 June 2020).

In Japan, demonstrations related to the revision of the Japanese constitution were held in several locations across the country on 3 May, the anniversary of the ratification of the pacifist constitution. Protesters believe that Article 9 of the current constitution, which renounces war and the use of force, should remain unchanged. The government has proposed amending the article in order to define the role of the Self Defense Forces (SDF), the de facto military of Japan. The concern is that this would allow Japan to legally become involved in armed conflicts (for more on this, see this recent ACLED infographic).

In another related development in Japan, a bill, which aims to facilitate the logistics of voting in a national referendum to change the constitution, is expected to pass during the ongoing Diet session (The Japan Times, 6 May 2021). While the actual exact proposed changes to the constitution have not been yet revealed, the ruling Liberal Democratic Party (LDP) argues that amending the current constitution is needed to include a clause, among possible others, on dealing with emergency situations, such as the COVID-19 pandemic. The opposition, however, argues that the LDP is trying to find excuses for its failure to respond to the COVID-19 pandemic (The Japan Times, 9 May 2021). During debates over the amendment, over 500 people gathered near the Diet to oppose the referendum facilitation bill and the revision of the constitution in principle (Asahi Shimbun, 6 May 2021). The protesters expressed concern that the proposed bill does not include a minimum vote turnout in a national referendum, especially as, amid the COVID-19 pandemic, the turnout may be very low (Tokyo Shimbun, 6 May 2021).

In Mongolia, five lawmakers from the opposition DP began a hunger strike sit-in in Ulaanbaatar after the election commission decided to accept the presidential candidacy of one DP member over another (Montsame, 6 May 2021). The protesters claim that the commission was influenced to accept a ‘weaker’ DP candidate by the ruling Mongolian People’s Party (MPP), casting further doubts about the integrity of the electoral process (Mongolia Focus, 6 May 2021). This development reflects the deep divisions inside the main opposition party ahead of the upcoming presidential elections.

Meanwhile, in a last-ditch effort, the current president vetoed an amendment to the Presidential Election Law, which was adopted on 29 April by the MPP majority parliament. The president claims that parliament violated the constitutional law by amending the law (Montsame, 6 May 2021). The amendment, which further clarifies that the current president is not allowed to run for re-election, is seen as highly controversial, as any changes to this law one year before an election are considered illegal.

Laura Sorica is East Asia Research Manager at ACLED, overseeing political violence and protests in Japan, South Korea, Taiwan, and Mongolia. Laura holds two BA degrees in Political Science and Linguistics, and a MA from University of Tsukuba’s Department of International and Advanced Japanese Studies. Her previous experiences included working in the private sector, the Romanian Embassy in Tokyo, and as an academic researcher in Japan. Her past research examined the US process of securitizing the Iranian and North Korean missile threats that led to the Aegis Ashore deployment in Romania, Poland, and Japan. She is fluent in Romanian, English, and Japanese.
Anders Lee

Anders Lee is the East Asia Assistant Research Manager at ACLED. He holds an MSc in Development Studies and has experience conducting research on development issues in Myanmar. His research interests include international migration and post-conflict state building.
12 May 2021
Share
TweetShare on Twitter Share on FacebookShare on Facebook Share on LinkedInShare on LinkedIn

Laura Sorica is East Asia Research Manager at ACLED, overseeing political violence and protests in Japan, South Korea, Taiwan, and Mongolia. Laura holds two BA degrees in Political Science and Linguistics, and a MA from University of Tsukuba’s Department of International and Advanced Japanese Studies. Her previous experiences included working in the private sector, the Romanian Embassy in Tokyo, and as an academic researcher in Japan. Her past research examined the US process of securitizing the Iranian and North Korean missile threats that led to the Aegis Ashore deployment in Romania, Poland, and Japan. She is fluent in Romanian, English, and Japanese.