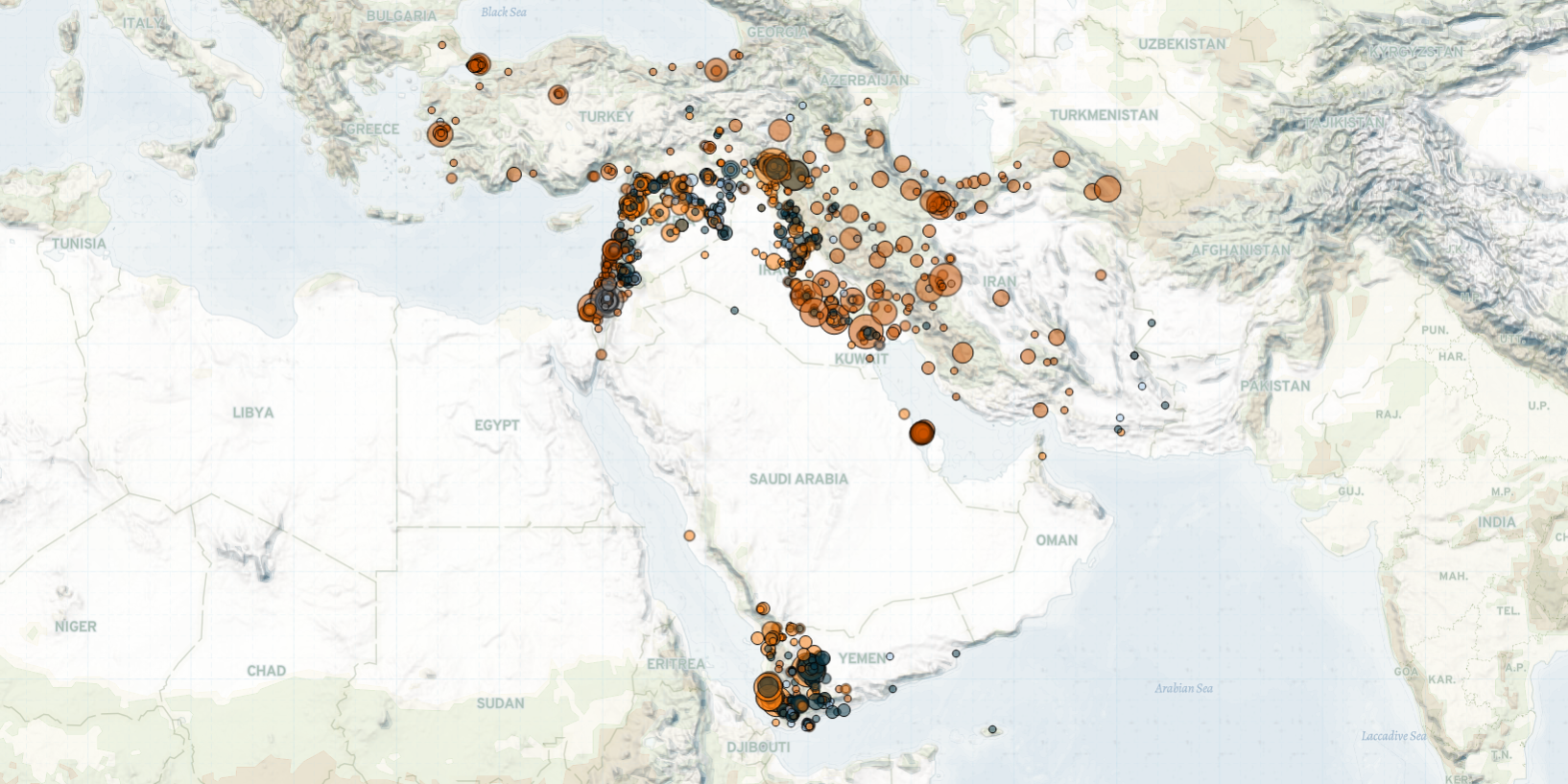 Last week in the Middle East, protests were held in several countries in support of Palestinians as tensions escalated in East Jerusalem. Clashes were reported at the Al Aqsa mosque and in the Sheikh Jarrah neighborhood. In Yemen, fighting between pro-Hadi and Houthi forces decreased across the country, particularly in Marib, although pro-Hadi and Southern Resistance forces made significant territorial gains in Ad Dali. Elsewhere, a weapons warehouse belonging to an Islamist armed group was targeted by an unidentified drone attack, resulting in three fatalities. Lastly, one demonstrator was killed in the Iraqi capital after security forces used live ammunition to discourage hundreds of former Popular Mobilization Forces demonstrators from storming the Ministry of Finance.

Across the Middle East, including in Iran, Jordan, and Lebanon, dozens of demonstrations were held in solidarity with Palestinians in East Jerusalem (Al Quds) as unrest continues in the occupied West Bank. Tensions came to a head on 7 May as tens of thousands of Palestinian worshippers attended the final Friday prayer of Ramadan at the Al Aqsa mosque (Al Jazeera, 7 May 2021). Many stayed on afterwards to demonstrate in support of Palestinians facing eviction in the Sheikh Jarrah neighborhood. Intense clashes erupted as Israeli police fired rubber bullets and stun grenades at Palestinians, who responded by throwing stones, bottles, and fireworks. Seventeen police and over 200 Palestinians were injured, with dozens requiring hospitalization (Times of Israel, 07 May 2021).

Throughout last week, residents of Sheikh Jarrah and their supporters held nightly demonstrations in the neighborhood. On several occasions, Israeli security forces intervened by spraying skunk water, a chemically enhanced type of sewage water (Al Jazeera, 6 May 2021). They also physically assaulted the demonstrators. Illegal settlers additionally attacked Palestinians and their homes, using pepper spray and live fire. The recent eviction demands against Palestinian families were filed by a settler organization registered in the US. This right-wing organization bought the land from two Jewish associations who in turn claim to have purchased from Palestinian owners in 1876 (DW, 8 May 2021). While the Israeli government argues that the Sheikh Jarrah case is a private “real-estate dispute,” the UN has warned that the pending evictions could amount to “war crimes” (Times of Israel, 7 May 2021). On 9 May, the Israeli Supreme Court delayed its decision on whether to evict the Palestinian families. However, the conflict has significantly escalated. Israel and Palestinian armed groups have exchanged heavy fire in recent days after a Hamas ultimatum for Israelis to leave Sheikh Jarrah and the Al Aqsa mosque expired on 10 May.

In Al Bayda, pro-Al Qaeda in the Arabian Peninsula (AQAP) channels claimed attacks against Houthi forces in Dhi Maddahi and Al Kinbah areas, a week after they had reportedly clashed with Houthi forces in the governorate (Twitter, 6 May 2021). This could signal an uptick of AQAP activity in Al Bayda following weeks of hiatus — the last AQAP/Houthi clashes in the governorate were reported around 23 March. Al Bayda also witnessed intense clashes between Al Humayqani tribesmen and Houthi forces in Al Habaj front over five consecutive days last week (Al Omanaa, 5 May 2021; Khabar News Agency, 5 May 2021). In Ad Dali, the clashes initiated by Houthi forces the previous week continued into last week, with pro-Hadi and Southern Resistance forces reportedly making significant territorial gains as they launched counter-offensives (Al Masdar, 1 May 2021).

In Saudi Arabia, Houthi forces continued to target the Saudi heartlands with drone and missile strikes, with Saudi forces claiming to have intercepted most attacks.

In Syria, there was an explosion at a weapons warehouse belonging to an Islamist armed group in Idleb’s Foah. The warehouse, which was suspected to have been targeted by a drone attack, was located near an IDP camp. Two Islamist fighters and a woman passing by were killed. In southern Syria, Israel launched airstrikes targeting regime army bases in the Quneitra countryside, though no casualties were reported.

Lastly, in Iraq, hundreds of former Popular Mobilization Forces members protested in front of the Ministry of Finance in Baghdad. The protesters demand the renewal of their contracts after they had been terminated. Iraqi security forces used live ammunition to discourage the protesters from attempting to storm the building. The live fire killed one protester, injuring others (Al Sumaria TV, 4 May 2021).