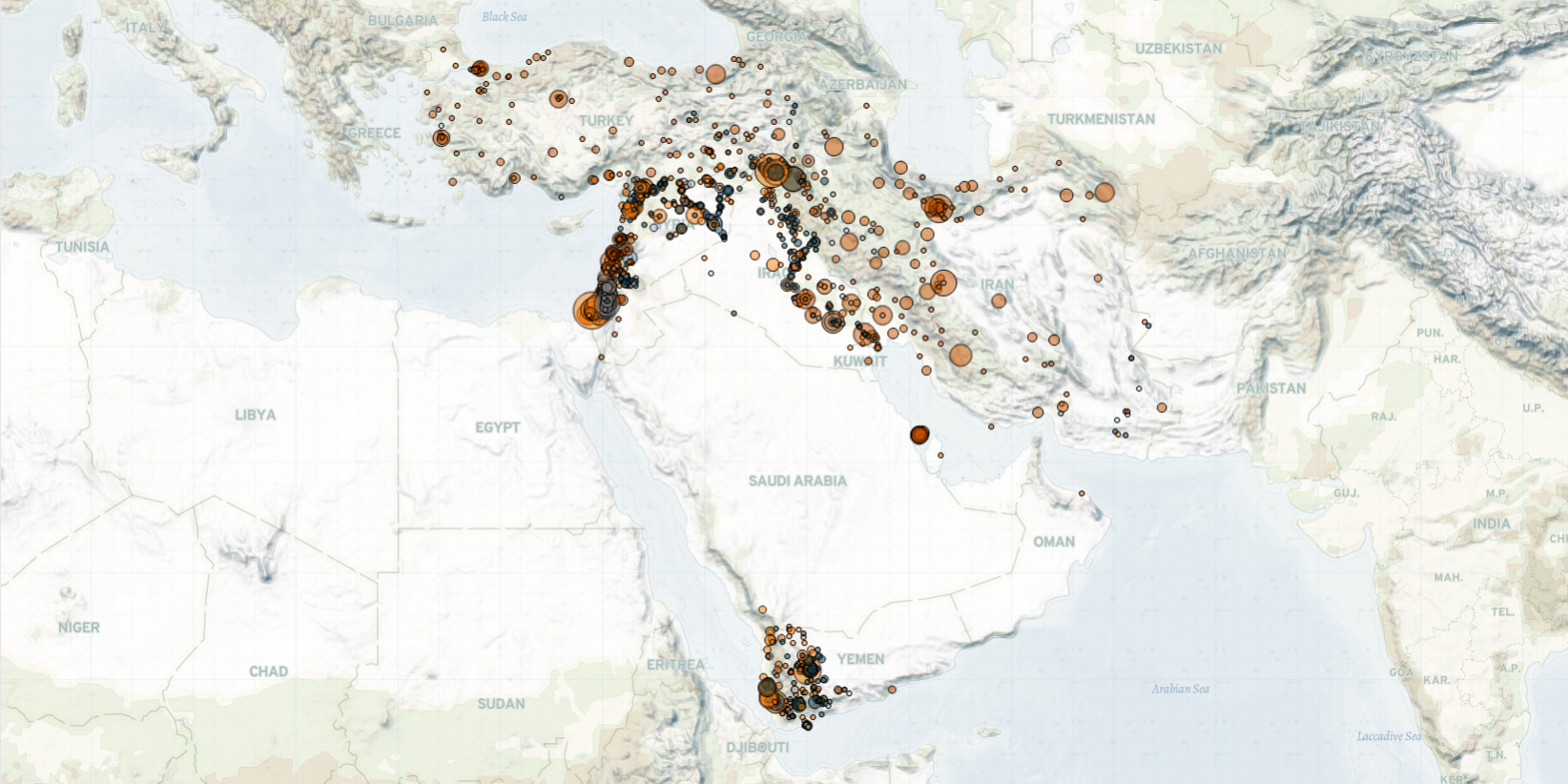 In the last two weeks in the Middle East, an 11-day military conflict broke out between Israel and Palestinian armed groups in the Gaza Strip, while Arabs and Jews engaged in political violence inside Israel and throughout the occupied West Bank. Across the Middle East, hundreds of demonstrations were held in solidarity with Palestine. Meanwhile, airstrikes were carried out by Russia and Israel in Syria, while the Syrian Democratic Forces (QSD) launched a large-scale security operation against the Islamic State (IS) in the Deir-ez-Zor countryside. In Iraq, riots broke out following the killing of a prominent activist in Kerbala. In Yemen, the overall level of political violence continued to decrease as fighting subsided in Marib and Taizz governorates, although the Houthi stronghold of Sadah was targeted by Saudi-led coalition airstrikes. Elsewhere, fighting between the Kurdistan Workers’ Party (PKK) and Turkish military forces intensified inside Turkey and in northern Iraq. Lastly, Syrians in Lebanon voting in the Syrian presidential election were targeted by angry Lebanese rioters over their support for President Bashar Assad.

Across the Middle East, including in Iraq, Turkey, Lebanon, Jordan, Bahrain, Kuwait, Oman, Qatar, and Yemen, hundreds of demonstration events were held in support of Palestinians. On 10 May, simmering tensions between Israel and Palestine boiled over into the most intense violence seen since the 2014 Gaza War. For 11 days, Israel and Palestinian armed groups in the Gaza Strip engaged in heavy exchanges of fire. According to the Israel Defense Forces (21 May 2021), Hamas and allied Islamic Jihad fired more than 4,300 rockets and mortars towards Israel, about 90% of which were intercepted by the Iron Dome. At least 12 Israelis were reportedly killed during the conflict.

Meanwhile, Israel pounded the Gaza Strip with heavy airstrikes, targeting Hamas and allied Islamic Jihad’s militants and infrastructure, including a vast tunnel network. The bombardment took a heavy toll on Palestinian civilians. According to the UN Office for the Coordination of Humanitarian Affairs (22 May 2021), at least 129 out of over 250 Palestinians killed were civilians, including over 60 children. Israel destroyed over 180 residential and commercial properties during the course of the conflict, including buildings that housed several local and international media outlets (Al Jazeera, 19 May 2021). Israel justifies the bombing of residential buildings by claiming that they housed military assets, but harsh international criticism has been voiced against its heavy-handed campaign and choice of targets (Times of Israel, 26 May 2021). A ceasefire mediated by Egypt began early on 21 May and has held thus far into this week.

Throughout the last two weeks, tensions also ran high in the West Bank and in Israel’s predominantly Arab cities, and those with mixed Arab and Jewish populations. Over 400 riot events were recorded during this period, involving clashes between Palestinians and Arab citizens of Israel, and Israeli security forces as well as Jewish Israeli rioters. Over 20 Palestinians and at least one Arab Israeli citizen were killed in the confrontations. Furthermore, over 70 events of settler violence against Palestinians and their properties were reported, while Palestinians and Arab citizens of Israel engaged in over 10 cases of violence against Israeli civilians and their properties. Moreover, in at least 20 cases, Palestinians attacked Israeli military forces with guns, knives, and vehicles.

Meanwhile, in Syria, Russian warplanes carried out dozens of airstrikes on northern Lattakia and the western Idleb countryside. Attacks on Tardeen village wounded several civilians. Elsewhere, an Israeli airstrike targeted a vehicle carrying ammunition along the Syrian-Lebanese border in the area adjacent to the Lebanese Harmel region. The vehicle likely belonged to the regime and/or a pro-regime militia (Naharnet, 14 May 2021). In eastern Syria, QSD carried out a large-scale anti-IS security operation in Deir-ez-Zor countryside following the killings of several of its members. During the operation, hundreds of Arab civilians were detained, including members of the Democratic Federation of Northern Syria (DFNS). While some were later released, others were kept in detention. In Quneitra, an agreement was reached under Russian mediation between the regime’s military intelligence and local dignitaries in Um Batna. This follows a prolonged period of negotiations and threats by regime forces to launch military operations in the town. The agreement stipulates the relocation of 30 wanted individuals along with their family members toward the Syrian north. In turn, the regime would end the blockade imposed against Um Batna (Asharq Al Awsat, 21 May 2021).

In Iraq, unknown militants assassinated a prominent activist in Kerbala city on 8 May. The assassination triggered riots involving clashes with security forces across several areas in Iraq, including in Basrah, Nassriya, and Baghdad. Rioters burned tires in front of the Iranian consulate in Kerbala city on 9 May. Two days later, demonstrators burned pictures of the Islamic Revolutionary Guard Corps (IRGC) commander. Police attempted to disperse the crowds with live ammunition, injuring dozens of protesters (Rudaw, 9 May 2021).

Elsewhere, the Iraqi Army and Peshmerga established a Joint Operations Center in Khanaqin district, Diyala province. The Joint Operations Center was established to better coordinate counter-IS operations between the Iraqi Army and the Peshmerga in internally disputed areas of Iraq. Both Arabs and Kurds have been blaming the lack of coordination between these two forces as the reason for continued IS attacks where their areas of control overlap (Basnews, 20 May 2021). Lastly, on 21 May, IS militants shot and killed the head of the Tarmiyah Youth Association in Baghdad, a local volunteer relief group (Baghdad Today, 21 May 2021).

In Yemen, political violence continued the downward trajectory observed since mid-March, with ACLED recording the lowest level of violence in the week of 15 May since the beginning of the year. This is primarily the function of a significant decrease in activity in Marib and Taizz governorates. Political violence in Marib, which initially saw an increase of 38% in the week of 8 May, declined sharply by over 44% in the week of 15 May. This represents a fluctuation in the frequency of clashes between pro-Hadi forces and Houthi forces along the main frontlines of Al Kasarah and Al Mashjah, west of the city. In addition, clashes between pro-Hadi forces and local tribesmen on 19 May testifies to the fragile situation in the anti-Houthi camp. The clashes took place east of Marib city, on the main road leading to the Safer oil and gas facility, and resulted in the burning of more than 25 gas and oil trucks (Twitter, 20 May 2021).

In Taizz, political violence increased significantly over the week of 8 May, mostly taking place in Al Mudhaffar district in the north and northwest of Taizz city, where pro-Hadi forces claimed to have thwarted several Houthi infiltration attempts. Despite the decline in political violence that followed over the week of 15 May, attacks targeting civilians increased. Three citizens were killed by a Houthi supervisor, and an explosion was reported in the qat market of Al Hawban, which left two civilians dead and an additional 21 injured.

In other areas, the Houthi stronghold of Sadah saw a sustained increase in levels of political violence over the last two weeks, with Saudi-led coalition airstrikes accounting for the majority of events. On 18 May, one of those airstrikes reportedly destroyed a health center and killed one of its workers (Yemen News Agency – SABA, 18 May 2021). Meanwhile, in Ad Dali, political violence significantly decreased over the last two weeks after clashes between pro-Houthi and anti-Houthi forces erupted in late April.

In Saudi Arabia, Houthi attacks continued at a sustained rate over the week of 8 May. Houthi forces targeted the Asir region for three consecutive days. They also targeted various locations in Najran city with more than 10 bomb-laden drones and missiles on 13 May — all of which Saudi forces claim to have intercepted. In contrast, only one Houthi attack was recorded against Saudi Arabia during the week of 15 May, returning to January levels.

Elsewhere, fighting between Turkish military and PKK forces intensified in northern Iraq and Turkey. PKK militants have increasingly carried out drone attacks targeting Turkish military facilities, with seven attacks recorded in Iraq and three inside Turkey over the last two weeks. Meanwhile, a high-ranking Kurdish militant, Sofi Nurettin, was killed in a Turkish airstrike in Iraq on 8 May. Turkish officials — who have long claimed that People’s Protection Units (YPG) is the “the Syrian extension” of the PKK — allege that Nurettin acted as the head of operations of the PKK’s “Syrian wing” from 2015 to 2020 (Vatan, 18 May 2021). According to Turkish security officials, Nurettin is the highest-ranking member of the PKK’s armed wing ever killed (Daily Sabah, 17 May 2021).

Lastly, in Lebanon, supporters of Syrian President Bashar Assad who were on their way to the Syrian embassy to cast their vote for the Syrian presidential election were attacked by groups of angry Lebanese rioters. Cars were pelted with stones and windshields were smashed. In another incident, a group of Syrians were run over by a Lebanese driver. The next day, several Syrian shops were vandalized in Wadi Khaled over their owners’ participation in the election. This follows the call by the head of the Lebanese Forces — a far-right Christian political party — for Assad’s voters to go back to Syria, claiming that the regime “does not pose a threat to them” (Middle East Eye, 20 May 2021). While in recent years fighting in Syria has subsided, according to the UN, the country is not ready for the return of refugees in the absence of a peace deal (Associated Press, 20 May 2021).