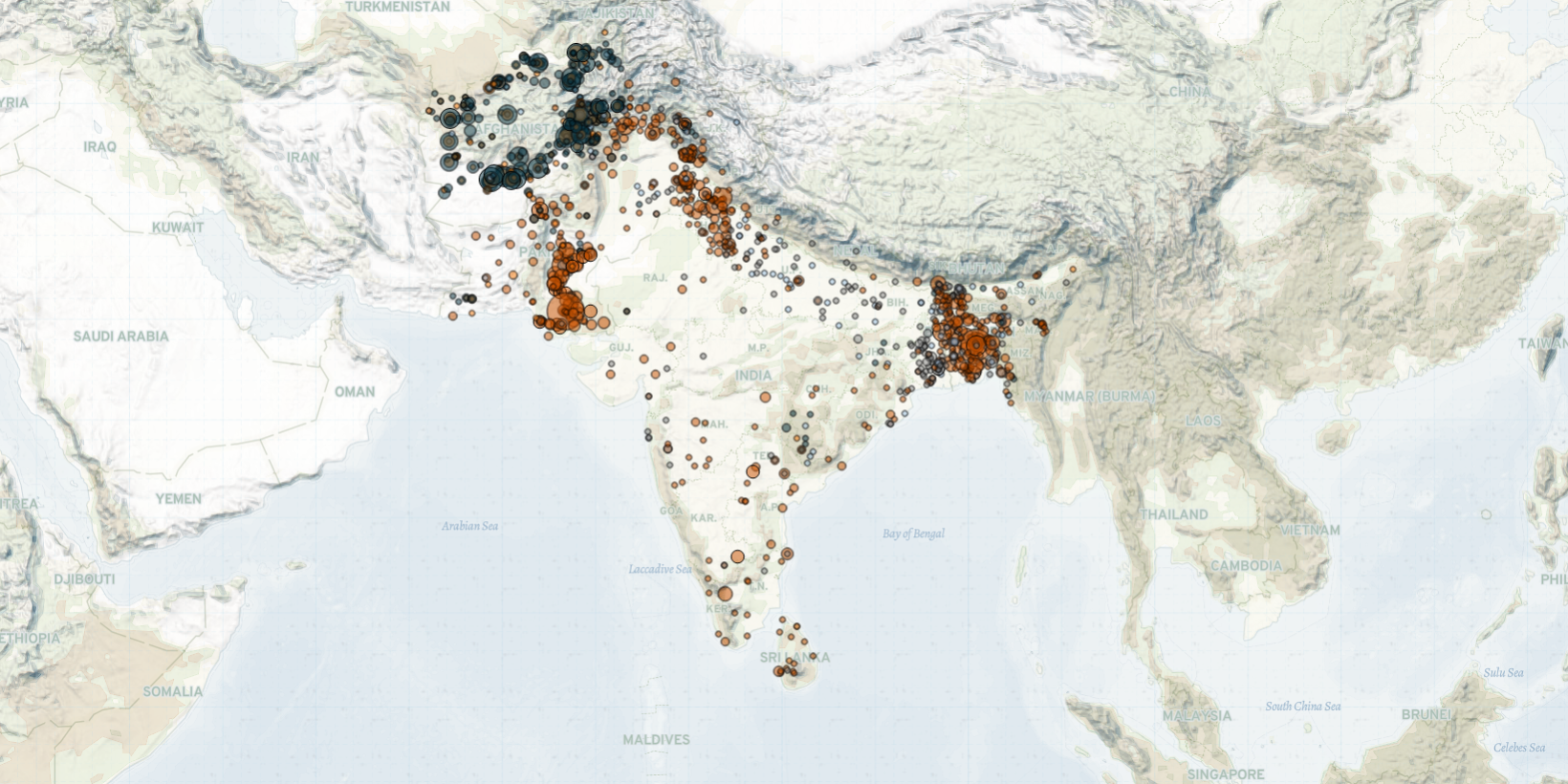 During the past two weeks in South Asia and Afghanistan, political violence continued in Afghanistan, Pakistan, and India. In Afghanistan, targeted attacks on civilian minorities were reported and violence between Taliban and Afghan forces continued. In Pakistan, domestic militant groups continued targeted attacks on security forces and civilians. In India, armed clashes between security forces and Naxal-Maoists resumed following a lull at the beginning of May. Post-election violence continued in West Bengal and Uttar Pradesh states in India, though reported events and fatalities decreased significantly relative to the first week of May. Violence surrounding local elections was also reported in Bangladesh. Demonstration events spiked in Pakistan and Bangladesh. Lastly, coronavirus-related violence and demonstrations continued across South Asia.

In Afghanistan,1ACLED is currently conducting a review of sourcing and reporting of the conflict in Afghanistan from 2020. despite a three-day ceasefire between Taliban and Afghan forces to mark the Muslim holiday Eid Al Fitr, violence remained high over the past two weeks. Although several clashes were reported in the Helmand and Urozgan provinces, there was an overall decrease in the number of battle events during the ceasefire for the observance of Eid Al Fitr, from 13 to 15 May. However, following the ceasefire, Afghan military forces continued to target the Taliban with ground and air operations, resulting in over 700 reported militant fatalities. Afghan forces also recaptured areas and villages within Kandahar, Kunduz, Herat, and Baghlan provinces. Meanwhile, the Taliban seized areas in Urozgan, Helmand, Laghman provinces, while capturing the Nerkh and Jalrez districts of Wardak province and Dawlat Shah district of Laghman province. The Taliban’s capture of the Nerkh district is significant due to its proximity to Kabul (Reuters, 11 May 2021; DW, 12 May 2021). It enables the group to carry out attacks and to potentially capture the Afghan capital, Kabul — though US Peace Envoy Zalmay Khalilzad has downplayed this possibility (AP, 18 May 2021). Meanwhile, the Taliban’s capture of Dawlat Shah district facilitated the group’s attack on Laghman’s capital, Mehtar Lam city, another important urban area of the country (VOA, 23 May 2021).

Civilians continue to be deeply affected by the ongoing clashes and insecurity in the country. Intense fighting has displaced thousands in Zabul, Kunduz, and Baghlan provinces during the month of May  (OCHA, 19 May 2021; Pajhwok News, 20 May 2021).

Additionally, in the deadliest attack against civilians in 2021, at least 90 were killed and 240 were wounded when three explosions, including a suicide bomber with a car, targeted a girls’ high school in Kabul city (New York Times, 9 May 2021). The attack took place in a neighborhood predominantly inhabited by Hazara community, a Shiite Muslim group. Afghan officials accuse the Taliban, but their spokesperson Zabihullah Mujahid denies the accusation, condemning the attack and blaming the Islamic State (IS) (Twitter, 8 May 2021). While IS claims responsibility for other attacks including a bombing in a Kabul mosque that killed 12 people, it too has not claimed responsibility for the attack on the girls’ high school in Kabul. Separately, unclaimed attacks targeting government workers also continued.

Continuous attacks targeting civilians during the month of Ramadan and the following Eid Al Fitr  renewed fears that armed groups in the country will ramp up the violence, emboldened by the withdrawal of US troops (United States Institute of Peace, 20 May 2021). At the same time, the Taliban and the government met in Qatar on 14 May, the second day of the ceasefire, and decided to continue peace talks (Al Jazeera, 14 May 2021). No date has been set yet for the next meeting (Afghanistan Times, 25 May 2021).

In Pakistan, a roadside bomb exploded on 21 May near a vehicle carrying Maulana Abdul Qadir Luni, the leader of the Jamiat Ulema-e-Islam-Nazaryati (JUI-N) party in Chaman town of Balochistan province, killing at least six people, including three other leaders of the party. The explosion occurred after the conclusion of a rally being held in solidarity with Palestinians amid the Israeli-Palestinian conflict in Gaza. Officials claim that Luni was the target of the explosion (Dawn, 22 May 2021), though Luni survived the explosion with minor injuries. No group has yet claimed responsibility for the attack. The JUI-N is a religious political party that has openly supported Al Qaeda and the Afghan Taliban (News International, 28 February 2016). The party held protest rallies and funeral prayers following the death of Osama Bin Laden in 2011.

In India, armed clashes between security forces and Naxal-Maoist militants increased over the past two weeks, compared to the beginning of May. Clashes were reported in Maharashtra, Jharkhand, and Chhattisgarh states, resulting in at least 19 fatalities. In two separate clashes in Gadchiroli district of Maharashtra, 15 Naxal-Maoist were reported killed. The security forces in Maharashtra have intensified search operations in areas bordering Chhattisgarh, anticipating more movements from the Naxal-Maoists during the ongoing season for collecting tendu leaves, which are used as wrappers for tobacco. Security personnel suggest that the Naxal-Maoists “are on the move during this period to extort resources from tendu contractors” (Indian Express, 21 May 2021).

Elsewhere in India, two fatalities were reported following attacks on civilians over election-related incidents in the state of Uttar Pradesh and West Bengal. In Uttar Pradesh, a teacher was shot dead over a rivalry related to a recently concluded panchayat election. In West Bengal, violence following the state assembly election results announcement on 2 May subsided over the last two weeks. At least one fatality was recorded after a Bharatiya Janata Party (BJP) member was killed by supporters of Trinamool Congress Party (TMC), the incumbent party in West Bengal. Following the announcement of results on 2 May, violence had escalated in the first week of May with at least 27 people killed in clashes between rival parties, though both the number of events and fatalities decreased in the last two weeks.

In Bangladesh, two fatalities were reported while more than 50 people were injured in factional clashes between supporters of the Awami League (AL) ahead of local-level union council elections in the Barisal division.

Meanwhile, demonstration events spiked in Bangladesh following the arrest of Rozina Islam, an investigative journalist, on 17 May. She has been detained under the Official Secrets Act and is charged with stealing health ministry documents (Al Jazeera, 18 May 2021). She has extensively reported on various irregularities in the health sector of Bangladesh, including the corruption and mismanagement in the procurement of materials and the recruitment of health personnel during the coronavirus pandemic (Prothom Alo, 18 May 2021). More than 150 demonstration events have been reported across the country since her detention.

Asena Karacalti is the South Asia Assistant Research Manager at ACLED, mainly overseeing the Afghanistan dataset.She holds a BA in Law, and an MSc in Cultural Anthropology and Development Studies from KU Leuven, Belgium. Her research interests focus on the transit experiences of migrant and refugee populations and political violence across the Middle East and North Africa. She has past experience as a lawyer and as an expert in migration and asylum organizations.She has previously worked as the Central Asia & the Caucasus, and Africa Research Manager at ACLED.
Ashik KC