Regional Overview: Mexico, Central America, and the Caribbean
22-28 May 2021 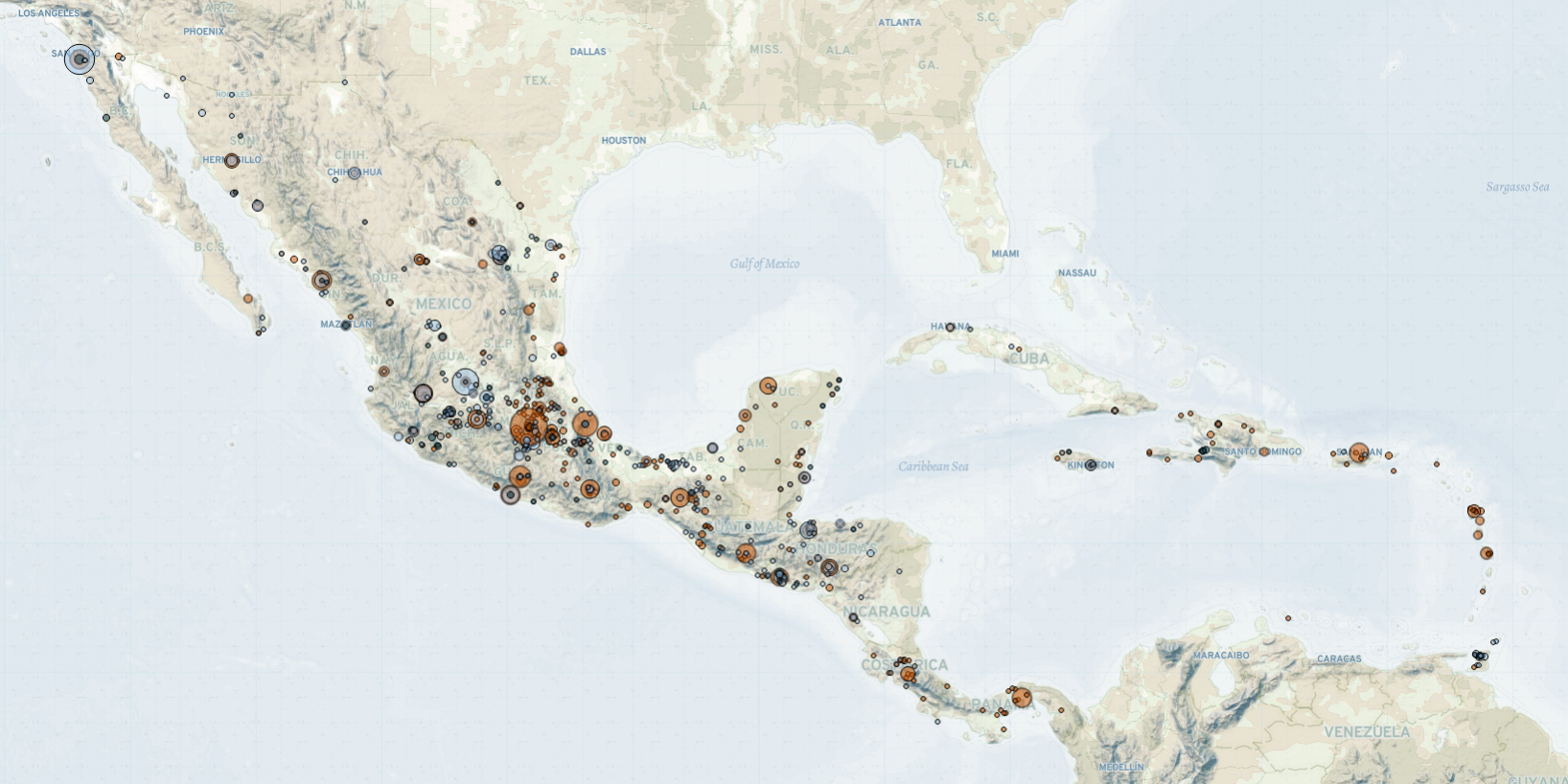 Last week in Mexico, Central America, and the Caribbean, demonstrations remained high. In Mexico and Honduras, violence targeting politicians continued ahead of elections, resulting in the killing of four candidates by unidentified armed men and gangs. In Nicaragua, the repression of members of the opposition and critics of the government of Daniel Ortega triggered a rare protest. Elsewhere, criminal violence continues at a high level. In Mexico, criminal groups set vehicles on fire to block roads in at least six municipalities in the state of Michoacan. In Honduras, gang attacks targeting taxi drivers doubled compared to the previous week.

In Mexico, violence against candidates and members of political parties continues at a high level ahead of the federal election scheduled for 6 June. Last week, ACLED recorded at least 12 attacks against government officers, politicians, and candidates running in local government elections. Attacks were perpetrated by gangs and unidentified armed men in at least ten of the country’s 33 states, and resulted in the deaths of three candidates in separate incidents. Mexican authorities claim that a majority of the killings targeting politicians are related to organized crime dynamics (Infobae, 23 May 2021). Similar to what was observed ahead of the 2018 elections, criminal groups have intensified their attacks against candidates who might stand against their criminal activities. Ultimately, the aim is to secure the election of politicians who favor the interests of criminals operating in the area (La Razon, 31 May 2021). Thus far in 2021, most violence targeting politicians in the country has been recorded in states heavily disputed by gangs, which include Guerrero, Michoacan, and Veracruz.

Similarly, in Honduras, a member of the Liberal Party of Honduras (PLH) and a member of the National Party of Honduras (PNH) — the two main political forces in the country — were killed by armed men in the municipalities of Tocoa and San Pedro Sula. Local organizations have reported that criminal groups are often involved in these attacks as they seek to influence electoral results by having politicians favoring their criminal activities elected (Expediente Publico, 11 February 2021). These killings are reminiscent of violence in the lead up to the November 2017 elections (TeleSur, 22 November 2017). Between January and November 2017, the United Nations High Commissioner for Human Rights (UNHCHR) recorded at least 15 killings of politicians, active local representatives, party activists, and candidates in the election (La Tribuna, 12 March 2018).

These attacks take place amid tensions around the parliament’s approval of electoral reforms on 25 May (Proceso Digital, 25 May 2021). The reforms aim to prevent fraud in the vote counting process, as witnessed in the 2017 elections. Although the law was welcomed by the United States, local critics claim that the reforms fail to modernize the voting process. Some denounce the reforms for allowing criminals or corrupted officials pending trials to participate in electoral processes until they are convicted (El Heraldo, 26 May 2021).

In Nicaragua, members of the opposition protested against the government’s crackdown on political opposition and activists in the country. This follows the police raid of the offices of the Confidencial newspaper, whose director is the brother of Cristiana Chamorro. Cristiana Chamorro is a candidate in the presidential elections scheduled for 7 November and is the daughter of former president Violeta Chamorro, elected in the 1990 elections against current President Daniel Ortega (Reuters, 1 June 2021). She is also the former director of the Violeta B de Chamorro Foundation, a non-profit organization for the defense of freedom of expression. Last week, authorities announced the opening of an investigation against the candidate for alleged money laundering while leading the foundation and jailed two former workers of the foundation (CNN, 31 May 2021). Analysts describe the move as another government-led attempt to suppress candidates and to secure a victory in the upcoming elections (Deutsche Welle, 25 May 2021).

In Mexico, violence continues in the state of Michoacan. Organized crime groups set roadblocks with burning vehicles in at least six municipalities. The roadblocks are meant to hinder law enforcement intervention in the Tierra Caliente region (Infobae, 28 May 2021). The region has been disputed between the Jalisco New Generation Cartel (CJNG) and members of the United Cartels — an alliance of different criminal groups created to push back incursions from the CJNG (Insight Crime, 25 May 2021). They seek to gain control over strategic assets in the state, known to be a hotspot for synthetic drug production (Infobae, 15 May 2021).

To support the roadblocks held by criminal groups, a group of residents threw stones at officers of the National Guard in the municipality of Buenavista. Allegedly, the residents were pressured by criminal groups to riot in order to prevent law enforcement from entering the Terrero community (Infobae, 30 May 2021). According to authorities, criminal groups have been paying local residents to attack law enforcement (Milenio, 25 January 2021). Conversely, other residents have been demonstrating and asking for increased security in their community. In El Aguaje, El Limoncito, and El Terrero communities, 70% of the population has fled the violence and clashes between criminal groups (La Jornada, 25 May 2021).

Finally, in Honduras, attacks perpetrated by gangs against taxi and bus drivers doubled last week compared to previous weeks. These attacks are likely connected to the activities of gangs, who target drivers refusing to pay extortion fees to operate. Gangs have been heavily relying on extortion payments — known as “war taxes”– as a key source of revenue. They mostly target passenger transportation workers and small business owners (Canal 6, 6 May 2021; La Tribuna, 24 March 2021). Increasing attacks and extortions prompted taxi drivers in San Pedro Sula to demonstrate. Between January and May 2021, ACLED records at least 40 fatalities in attacks targeting taxi and bus drivers; this represents nearly a 50% increase compared to the same period in 2020.