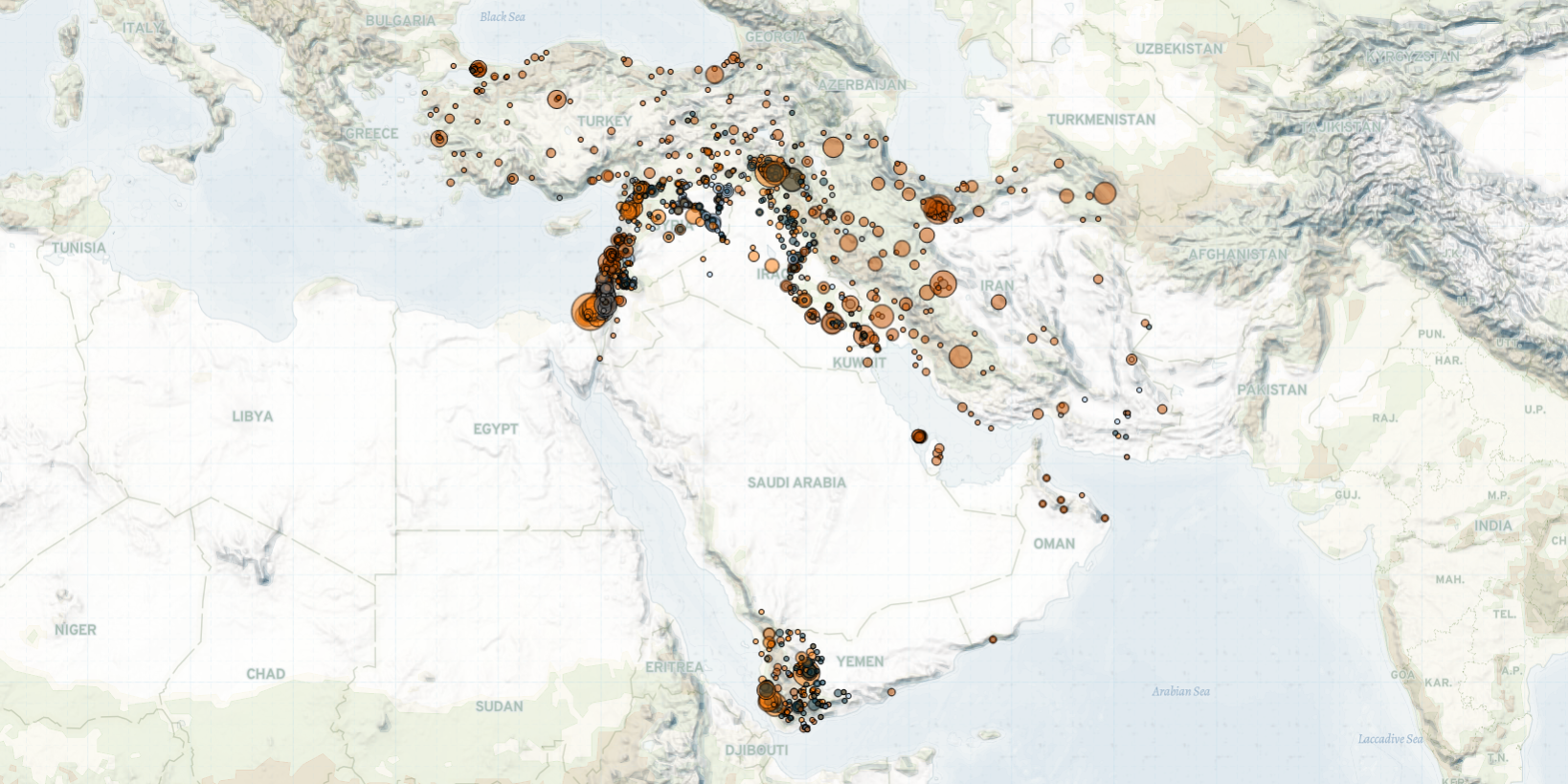 Last week in the Middle East, the overall level of violence remained low in Yemen, although a slight increase in fighting was reported in Al Jawf, Hodeidah, and Marib. Meanwhile, demonstrations broke out in Syria, mainly in Dar’a province, against the Syrian presidential elections. Anti-government demonstrations were also staged in Iraq. These demonstrations turned violent after a group of demonstrators set fire to police caravans and vehicles, with police responding in turn by using live ammunition. The ceasfire beween Israel and Palestinian armed groups continues to hold, while demonstrations also decreased in the West Bank. Elsewhere, mass demonstrations over unemployment were held in Oman, while oil and gas industry workers protested in Iran’s southern provinces.

In Yemen, political violence increased slightly by 13% last week compared to the week before, although it remains at its lowest levels since the beginning of the year. It was the second week with the fewest events since January 2021. This slight increase was driven by events in Al Jawf, Hodeidah, and Marib. In Al Jawf, armed clashes between pro-Hadi and Houthi forces took place on a number of fronts, including in Al Jadafir and Nudhudh. In Hodeidah, Houthi forces continue to target civilian areas in At Tuhayat, Ad Durayhimi, and Hays districts at a sustained rate. On 27 May, a Houthi drone targeted a school in At Tuhayat district and injured four children.

In Marib, political violence slightly increased due to sustained Saudi-led coalition airstrikes in Sirwah and Medghal districts, to the west of Marib city. On 25 May, in a notable incident, Hadi Information Minister Muammar Al Iryani announced that a Hezbollah military leader was killed as the result of an airstrike (Twitter, 25 May 2021). However, despite the increased number of airstrikes, last week saw the fewest battle events in a week since the Houthis launched their offensive on Marib in early February 2021. It is unclear yet whether this trend will hold, and whether it is linked to ongoing diplomatic efforts and possible renewed Houthi engagement (OSESGY, 31 May 2021).

In Saudi Arabia, low levels of Houthi attacks continued for the second consecutive week. This could be linked to supposedly secret talks between Iran and Saudi Arabia in Iraq. Allegedly, during these talks, Riyadh has asked Tehran to stop Houthi attacks on the kingdom, and in exchange, Saudi Arabia would help sell Iranian oil (Middle East Eye, 13 May 2021).

In Syria, protests broke out in several areas across the country against the Syrian presidential elections scheduled for 26 May, though they were mainly concentrated in Dar’a province. In Dar’a city, regime forces used live ammunition to disperse protesters, wounding four. Shop owners across the Dar’a countryside went on a general strike in protest of the elections. Bashar Al Assad was announced the winner of the elections with over 95% of the votes (Reuters, 28 May 2021). This was dismissed as a farce by the Syrian opposition and by most of the international community (Reuters, 28 May 2021). Elsewhere, an IED went off in Aleppo’s Jarablus, killing three civilians and wounding seven others. In Afrin, another IED detonated, killing a displaced civilian.

In Iraq, Iraqi security forces arrested Qasim Muslih, the Anbar Operations Commander of the Popular Mobilization Forces (PMF), on 26 May in Baghdad. Muslih is allegedly responsible for directing some of the rocket attacks targeting US and Coalition forces in Ain Assad Air Base. The PMF responded by blocking one of the entrances to the Green Zone and by deploying vehicles to the streets, including around the Turkish embassy and the residence of the Iraqi Prime Minister. The PMF withdrew its deployment after custody of Muslih was handed over to a security authority within the PMF. Muslih was the commander of the PMF 13th Brigade (Liwa al-Tafuf) before being appointed as the Commander of Anbar Operations (Reuters, 26 May 2021).

Elsewhere in the country, protests continued in Tahrir Square in Baghdad, demanding both the resignation of the Al Khadimi government as well as state action to detain individuals responsible for assassinating activists and demonstrators. Iraqi security forces used live ammunition to disperse thousands of demonstrators in the area, while demonstrators set fire to police caravans and vehicles in the square. The violence resulted in the death of two demonstrators and the injury of 26 others, with several security personnel wounded. At least 11 arrests were also reported (New York Times, 25 May 2021).

The ceasefire between Israel and Palestinian armed groups in the Gaza Strip continued to hold last week, while demonstrations in the West Bank significantly decreased. Sporadic settler violence against Palestinians and their properties continued throughout the week, although at a lower rate compared to the week prior. There are, however, concerns over a possible renewed spike in violent confrontations as Hamas has called for a “Day of Rage” in the West Bank on 4 June. They have called on Palestinians to hold mass marches and to “block streets that pass through the West Bank” and to “clash with settlers who are working to impose a fait accompli under the auspices of the occupation government” (Times of Israel, 1 June 2021).

In Oman, a rare wave of protests erupted throughout the country last week. Omanis took to the streets of Salalah and Sohar, in addition to a number of other smaller towns, to demand more employment opportunities. Amid reports of a “massive police response” (Al Jazeera, 24 May 2021), Sultan Haitham bin Tariq ordered the immediate opening of 2,000 full-time temporary government jobs and announced a plan to create 15,000 private-sector jobs over the next two years (Associated Press, 25 May 2021). It is unclear, however, if this will be enough to prevent further protests in the heavily indebted Gulf country, which is engaging in structural reforms to diversify its economy.

Lastly, in Iran, over a dozen demonstration events were staged by Iran’s oil and gas industry workers outside the Parliament in Tehran, and in the southern oil producing provinces of Khuzestan, Bushehr, Hormozgan, as well as Kohgiluyeh and Boyer-Ahmad. Both official employees of the state-owned National Iranian Oil Company and private contractors took part in the demonstrations, demanding higher wages amid high inflation rates. Facing harsh working conditions in the high heat in southern parts of Iran (Radio Farda, 3 August 2020), oil and gas industry workers have staged sporadic protests in Iran in recent years over their working conditions and low salaries. Iran has the world’s second largest natural gas reserves and the fourth largest oil reserves, with the government’s revenue heavily relying on oil exports (World Bank, 30 March 2021).