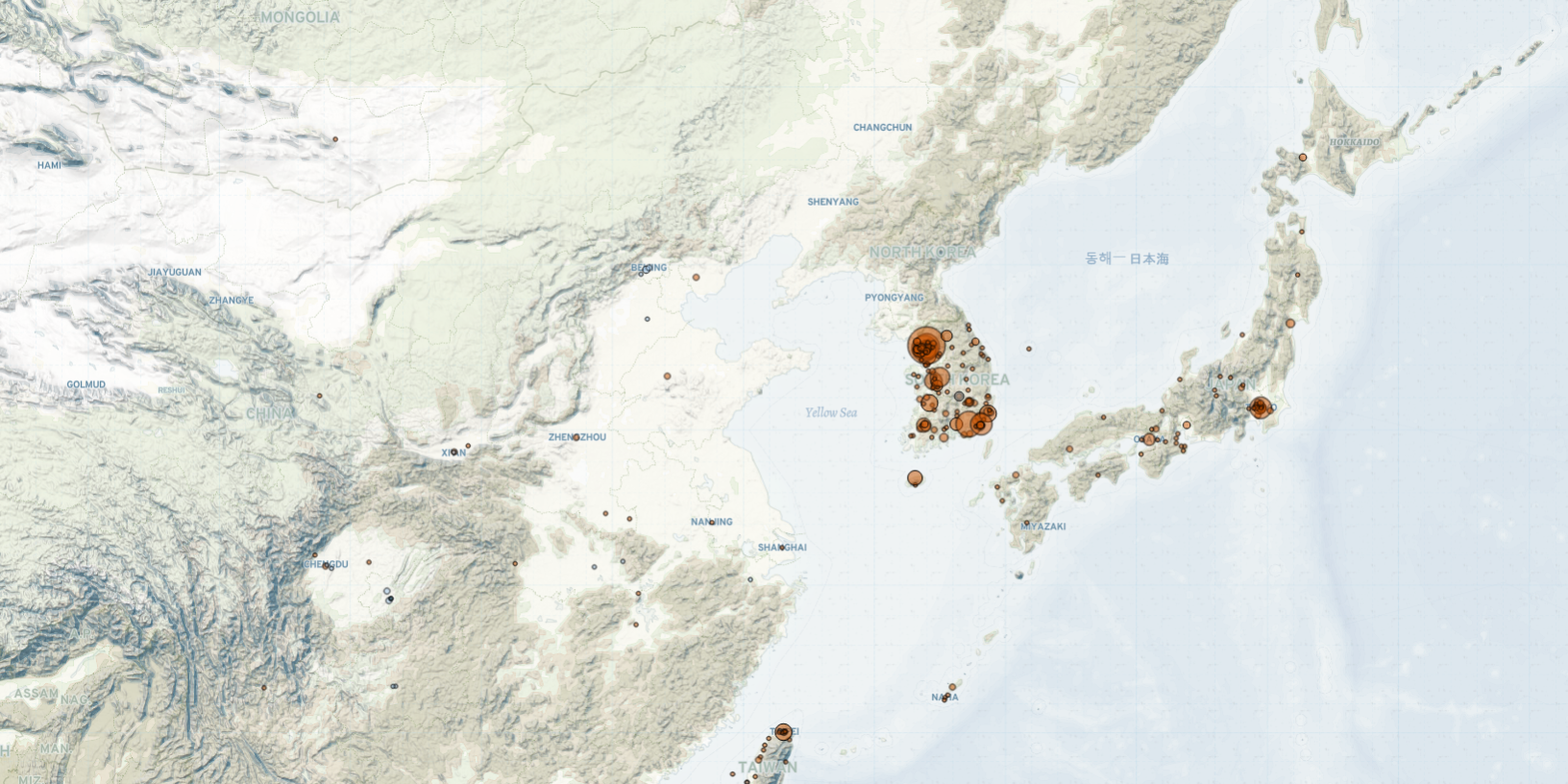 Last week in East Asia, public gatherings were held in Hong Kong to commemorate the 1989 Tiananmen Square protests, despite a sweeping ban on the annual vigil due to coronavirus restrictions. In Taiwan, amid a surge in COVID-19 infection cases, people protested by driving cars outside the Presidential Office to demand the government accelerate the procurement of vaccines. In Japan, LGBT groups demonstrated in Tokyo and Sapporo, urging the government to pass a bill banning discrimination against sexual minorities. Lastly, the death of a female sergeant in the military after being sexually harassed by a colleague sparked demonstrations and public outrage in South Korea.

In Hong Kong, the government imposed a ban on the annual candlelight vigil at Victoria Park for the second consecutive year as part of broader COVID-19 restrictions (South China Morning Post, 27 May 2021). Despite the ban, defiant crowds held public gatherings on 4 June to commemorate the 1989 Tiananmen Square protests. Despite heavy police deployment, citizens found creative ways to circumvent the ban, such as by encircling Victoria Park while holding candles (AP, 4 June 2021). Meanwhile, commemorative events were held at other sites, including evening masses at churches, many of which were coordinated by the Justice & Peace Commission of the HK Catholic Diocese (RFA, 4 June 2021). At least six people were arrested on 4 June in relation to the commemorative event (South China Morning Post, 4 June 2021). Additionally, a protest related to the commemoration was reported in Japan. About 200 people, including Uyghurs and people from Hong Kong, held a rally in Tokyo on 4 June, demanding the Chinese government investigate the truth behind the massacre and to apologize (Sankei Shimbun, 4 June 2021).

Demonstration activity decreased significantly in Taiwan last week as the government imposed strict restrictions amid a surge in coronavirus infections. The majority of the protest events recorded last week were generally small demonstrations organized by minority opposition parties demanding the government improve its response to the pandemic. Members of the pro-reunification Chinese Unity Promotion Party even called on the government to accept China’s assistance (UDN, 4 June 2021). Under current regulations, vaccine imports from mainland China are banned in Taiwan. Opposition parties demand that the government consider more procurement options amid a recent sharp increase of COVID-19 infections (DW, 27 May 2021). Although China offered to help Taiwan deal with the recent outbreak, the Taiwanese government has not yet accepted any offers and has instead accused China of hampering Taiwan’s efforts to procure vaccines from other countries (DW, 27 May 2021). Despite outdoor gatherings being limited to ten people, one large-scale demonstration was reported in Taipei (ET Today, 3 June 2021). Protesters drove in a convoy of almost 100 vehicles outside the Presidential Office Building, asking the government to speed up the delivery of internationally-approved coronavirus vaccines (ET Today, 3 June 2021).

In Japan, LGBT groups campaigning for the enactment of a bill to promote LGBT rights protested last week in Tokyo and Sapporo (Mainichi Shimbun, 30 May 2021; Hokkaido Shimbun, 3 June 2021). The bill, which was drafted by the ruling Liberal Democratic Party (LDP) aiming to reflect the anti-discrimination principle of the Olympic Charter, was approved by the opposition parties but has yet to be submitted to the Diet. The delay seems to be caused by conservative LDP members who expressed concern regarding the wording of the bill, which they feel could be interpreted as contravening conservative values (The Japan Times, 26 May 2021). Protesters gathered in Tokyo and Sapporo to demand the LDP pass the bill before both the Tokyo Olympics commence and the current Diet session ends in mid-June. Protesters have additionally criticized two LDP lawmakers’ discriminatory remarks towards the LGBT community. During discussions on the bill, one LDP lawmaker said that gay people “go against the preservation of the species,” while another lawmaker said it was “absurd” that transgender women are asking to use women’s bathrooms (The New York Times, 5 June 2021).

Lastly, in South Korea, a sexual assault victim’s death in the military inflamed public anger last week. A female master sergeant of the Republic of Korea Air Force is reported to have taken her life in late May after allegedly being sexually abused by a male colleague. Protesters affiliated with various civic groups took to the streets with heightened criticism over the sexual harassment case and alleged cover-up of the incident by air force officials (AP, 4 June 2021). As a result, President Moon ordered military investigators to conduct a “strict probe” into the sexual violence case and any secondary assault (YNA, 3 June 2021). Despite the immediate resignation of the air force chief on 4 June, public anger over the sergeant’s death is likely to continue with the ongoing investigation. South Korea’s military has been criticized for failing to protect victims of sexual violence or other forms of abuse (Al Jazeera, 5 June 2021). In March, a transgender soldier, who was expelled from the military after undergoing gender confirmation surgery, took her life, triggering another public outcry.