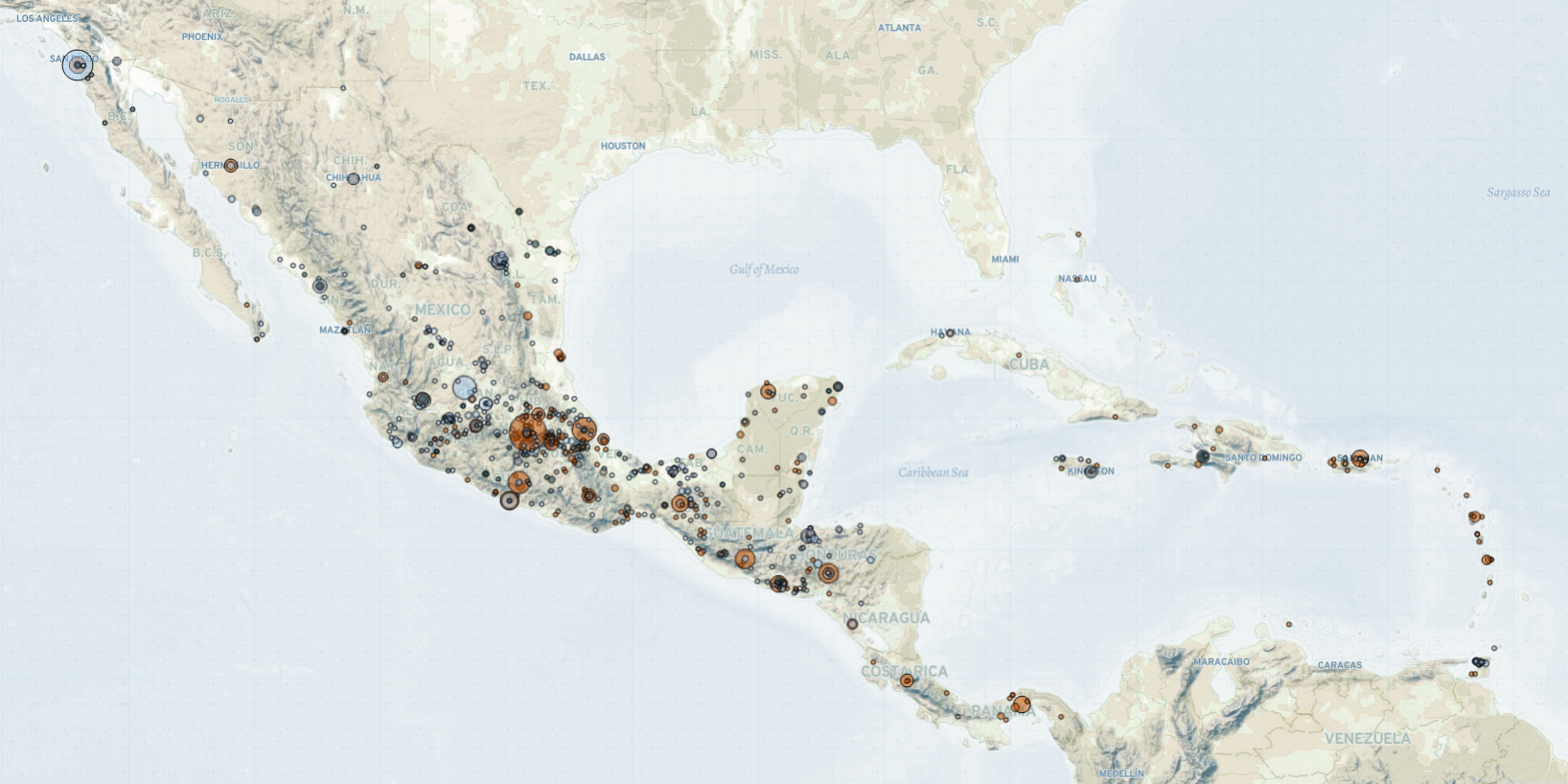 Last week in Mexico, Central America, and the Caribbean, levels of violence remained high. In Mexico, the number of attacks targeting candidates and government officials increased during the week of the elections. In Nicaragua, the government continued to arrest members of the opposition and contenders in the presidential elections. In Haiti, gangs affiliated with the G-9 alliance attacked several police stations in the southern districts of Port-au-Prince over an ongoing territorial dispute within the alliance. In Honduras, unidentified armed men killed a member of the Garifuna indigenous community in Comayagua. In Guatemala, anti-corruption protests took place against the dissolution of the anti-corruption Special Prosecutor’s Office against Impunity (FECI).

In Mexico, violent incidents targeting candidates and government officials continued to increase prior to and after the elections held on 6 June. The majority of incidents were recorded in the states of Veracruz, Oaxaca, Puebla, and Baja California. According to local organizations, these attacks are primarily perpetrated by criminal groups seeking to maintain power for politicians favoring their interests (InsightCrime, 3 June 2021). However, the responsibility of violence around the federal election cannot be solely attributed to gangs. Amidst voting, mob violence also increased last week compared to the previous week. In at least 15 of the 32 states, supporters of different parties clashed, destroyed ballots, and attacked polling station officials, attempting to influence election results. Tensions continued beyond voting day, as demonstrators too contested the results on grounds of alleged electoral fraud and vote-buying. A majority of demonstrations were recorded in the state of Tlaxcala, where the President’s National Regeneration Movement (MORENA) won most of the mayorships previously held by the Institutional Revolutionary Party (PRI) (Milenio, 7 June 2021).

These elections were particularly contentious as they encompass unprecedented voting for over 20,000 elected positions across the different administrative levels. The elections were also decisive to confirm MORENA’s dominance of the Mexican political scene and ability to implement its reform agenda. In the legislative elections, MORENA is set to lose its absolute majority in Congress. This suggests that opposition parties’ strategy of running as coalitions has paid off. However, at the state level, the PRI, which has traditionally ruled the majority of states, lost almost all of its governorships to MORENA (LSE Blog, 10 June 2021). Similarly, at the municipal level, although MORENA lost its grip on Mexico City, it won the majority of municipalities, followed by the PRI and the National Action party (PAN) (El Economista, 9 June 2021).

In Nicaragua, five major political figures were detained by police ahead of the presidential elections scheduled for 7 November. On 6 June, police detained Felix Madarriaga, Arturo Cruz, and Juan Sebastián Chamorro: candidates in primary elections for the Citizens for Freedom movement and the National Unit Blue and White (UNAB) opposition parties. They were arrested for allegedly inciting foreign interference in national affairs and plotting against the government of Daniel Ortega. International organizations and local opposition denounced the arrests as a state-led initiative to prevent political opposition from running in the next election (BBC, 9 June 2021). According to the Treason Law approved in December 2020, people accused of inciting foreign interference or disrupting national order are banned from running for elected positions (AP, 21 December 2020). In the first two weeks of June, at least six members of the opposition and activists have been arrested by state forces.

In Haiti, members of the G-9 gang alliance attacked and seized control of police stations in the southern districts of Port-au-Prince, killing eight police officers and seizing weapons. The attacks are allegedly connected to an internal dispute within the G-9 alliance over the splitting of territories in Port-au-Prince (Le National, 8 June 2021). Members of civil society denounce the lack of government action to combat the activities of gangs in the capital, amidst claims of collusion with ruling elites (Rezonodwes, 6 June 2021). Recently, the Gran Ravin and Village de Dieu gangs agreed to a ceasefire after being allegedly bought off by state officials to allow the interim Prime Minister to drive through their territory (Le National, 9 June 2021).

In Guatemala, anti-corruption protests took place in four departments of the country against the planned dissolution of the anti-corruption body, FECI. FECI was originally created in 2012 to support the United Nations’ International Commission against Impunity (CICIG), in charge of investigating organized crime networks and corruption. The Guatemalan Attorney General initiated legal proceedings against FECI, claiming that its mandate was unconstitutional after former president Jimmy Morales ended the CICIG’s mandate in 2019 (Prensa Libre, 10 June 2021). Protesters and civil society claim that this is part of the government’s wider strategy to criminalize human rights defenders and justice officials (Amnesty International, 8 June 2021). The CICIG and the FECI have prosecuted public servants accused of corruption, and precipitated both the resignations and arrests of former presidents (Epicentro, 28 December 2020; Insight Crime, 14 October 2020).

In Honduras, a member of the Garifuna indigenous community was killed by unidentified armed men. The body of the victim was found in the city of Comayagua bearing signs of torture. Although the identities of the perpetrators remain unknown, members of this indigenous group have reportedly been the target of attacks for their activism protecting natural resources and indigenous territories (Amnesty International, 7 June 2021). Thus far in 2021, ACLED records at least three attacks against members of the Garifuna indigenous community, resulting in the deaths of at least six people.