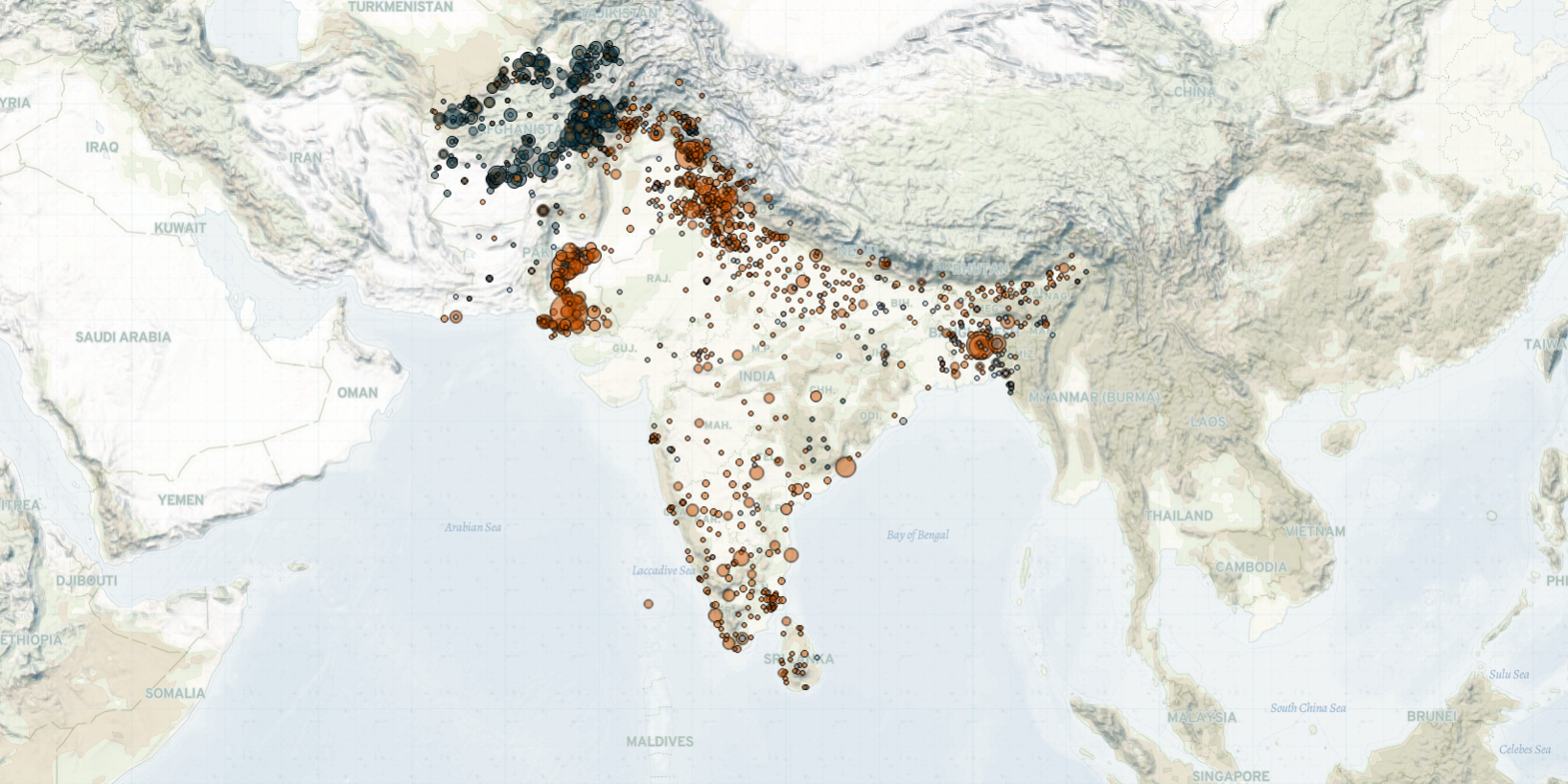 Last week in South Asia, the Taliban seized territory from Afghan state forces as lethal battles and attacks on civilians continued across Afghanistan. Baloch separatist groups launched attacks on security forces and engaged in remote violence in Pakistan. In India, Naxal-Maoist rebels reappeared in the south and clashed with police teams across the Red Corridor. Islamist militants attacked police in Jammu and Kashmir Union Territory, taking advantage of a drop in anti-militancy operations due to the coronavirus pandemic.

In Afghanistan,1ACLED is currently conducting a review of sourcing and reporting of the conflict in Afghanistan from 2020. the Taliban and Afghan state forces clashed in 32 out of 34 provinces last week. The Taliban made territorial gains across large areas, capturing villages, and Afghan military posts and bases. The group also gained control over 20 districts across 11 provinces last week. Meanwhile, Afghan forces continued their operations and airstrikes, as both parties traded control over Khan Abad district in Kunduz province and Dawlat Abad district in Faryab province. In one operation, Taliban militants besieged and killed at least 23 Afghan military commandos at a base in Dawlat Abad district. In the provinces of Herat, Badakhshan, and Ghor, Afghan state forces surrendered or fled, leaving control to the Taliban without clashes. Military and local government sources have attributed the recent relative ease with which the Taliban has captured territory to delays in the arrival of reinforcements and exaggerated reports of Taliban troop numbers (TOLO News, 20 June 2021). Upon territorial losses, Afghan President Ashraf Ghani replaced the Defense Minister and the Interior Minister (Al Jazeera, 19 June 2021). The Afghan military’s capacity to carry airstrikes and extensive operations is unlikely to improve in the short term, as American and foreign contractors withdraw from the country along with NATO forces. Afghan troops rely on those contractors to keep their air and ground forces running through training and maintenance (New York Times, 19 June 2021).

Also in Afghanistan, violence targeting civilians continued last week. Seven members of the Hazara ethnic group were killed in Kabul city when Islamic State militants detonated two bombs which they had planted in a minibus. The Taliban also targeted civilians, including government workers and former security forces. Meanwhile, in a series of separate events, unidentified groups killed at least four polio vaccinators and wounded several others in multiple districts of Nangarhar province, including in Jalalabad city. The attacks led to the suspension of the vaccination program in eastern Afghanistan (Amnesty International, 16 June 2021).

In Pakistan, Baloch separatists stepped up attacks on security forces in Balochistan province. At least four Pakistani forces personnel were killed in an IED attack by the Baloch Liberation Army​​ (BLA) near Quetta city. In Kech district, the Baloch Liberation Front (BLF) targeted military personnel in proximity to Turbat airport, killing one soldier. Suspected Baloch separatists also injured at least four civilians in two explosions in Quetta and Sohbatpur districts. Following these incidents, the Counter Terrorism Department launched operations in several areas across Balochistan, and killed at least four BLA militants at a coal mine in Kachhi district. Baloch separatist groups have been carrying out an insurgency since 1948, demanding the independence of Balochistan from Pakistan. Since 2020, the insurgency has created increasing security challenges for Pakistani security forces, as separatists have created new alliances and expanded their operational capabilities (for more on organized violence in Balochistan, see this ACLED analysis piece).

Notably in India, Naxal-Maoist rebels resurfaced in Andhra Pradesh state and exchanged fire with security forces conducting a combing operation. At least six Naxal-Maoists, including a senior leader, were killed. A day prior to the encounter, Naxal-Maoists exchanged fire with Odisha state police, before managing to escape and cross into Andhra Pradesh (The Indian Express, 17 June 2021). In recent years, increased patrolling and combing operations in Andhra Pradesh have almost completely cleared the state of rebels (The Indian Express, 17 June 2021). The last recorded encounter between rebels and security forces in the state was almost a year ago in July 2020.

Meanwhile, Naxal-Maoists also clashed with security forces in Jharkhand and Chhattisgarh state, resulting in the deaths of one rebel and a civilian. Naxal-Maoists have also reportedly begun using WhatsApp to recruit youth from the Maratha caste in Maharashtra state, urging them to initiate violent demonstrations against the government (India Today, 16 June 2021). For years, members of the Maratha caste have demonstrated peacefully, highlighting their relative socio-economic disadvantage compared with other forward castes, and demanding caste-based reservations, which were ruled against by the Supreme Court in May (The Indian Express, 5 June 2021). According to police reports, Naxal-Maoists have been operationally weakened by the coronavirus pandemic and have recently focused on drawing new members (The Indian Express, 17 June 2021).

Elsewhere in India, the Islamist militant group Lashkar-e-Taiba (LeT) was active last week in Jammu and Kashmir. LeT militants fired at a police team enforcing coronavirus curfew hours in Sopore town, killing two police officers and two civilians, and injuring at least four more, in its deadliest attack in 2021 thus far. According to local police, there has been a decline in anti-militancy operations due to the coronavirus (Daily Excelsior, 13 June 2021). This may have allowed militants to take advantage of authorities’ shifted focus towards enforcing lockdown restrictions and to launch attacks in cities. As a result of the attack, police intensified their operations and killed an LeT militant during a cordon-and-search operation launched in Srinagar district.