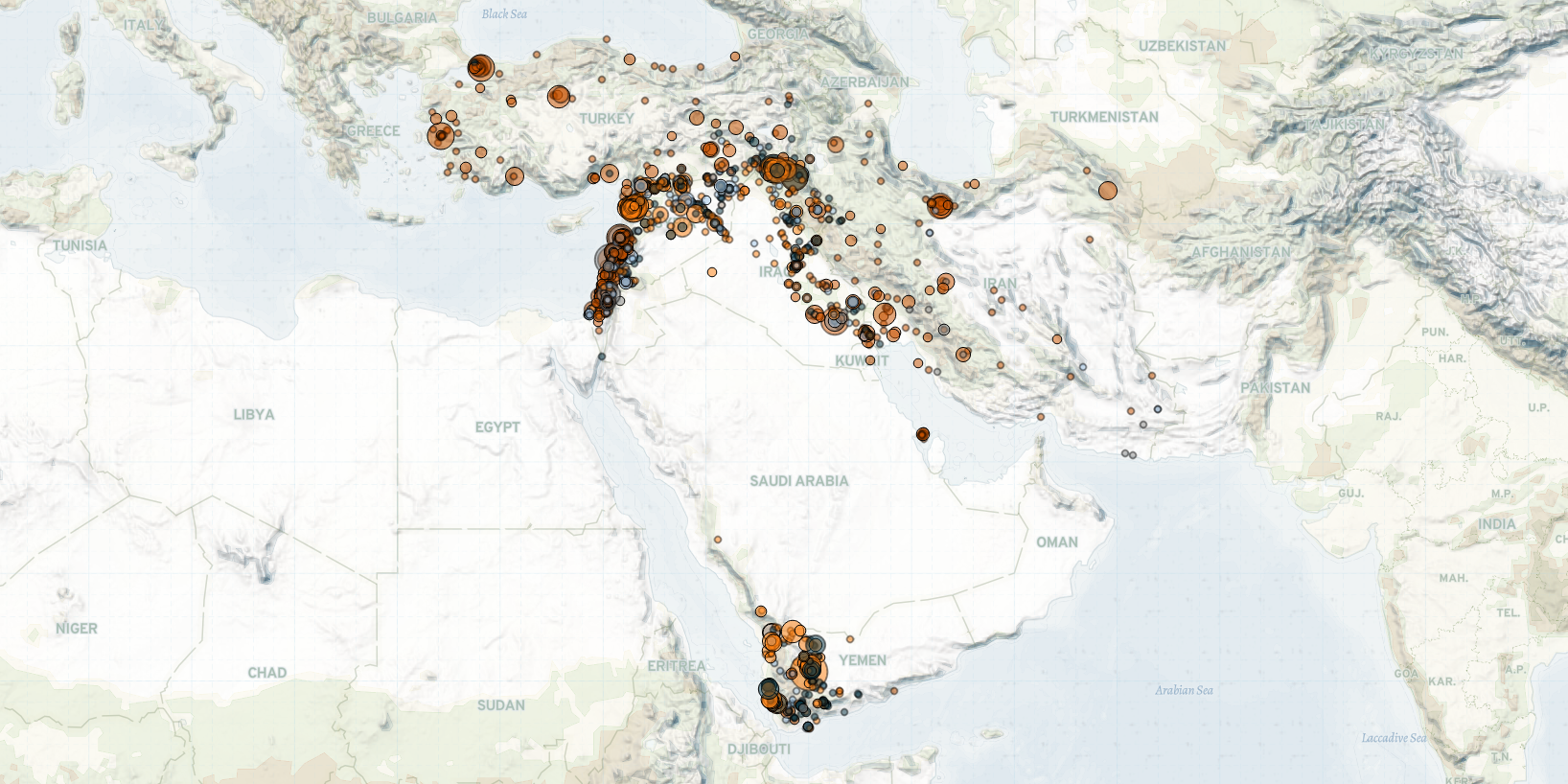 Last week in the Middle East, political violence remained high in Yemen as the Houthi offensive on Marib city continued, and pro-Hadi forces and Hazmiyah Resistance tribesmen launched an offensive on Houthi forces in As Sawmaah district. Meanwhile, Houthi forces increased their drone and missile attacks on Saudi forces in Asir and Najran provinces. In Iraq and Syria, pro-Iran militant positions were targeted by US warplanes after repeated attacks on US and Global Coalition forces. Israeli forces launched an airstrike on a Hamas position in the Gaza Strip, following the release of incendiary balloons from Palestine into Israel. In Turkey, an increase in protests was driven by different groups protesting homophobia and transphobia, as well as the withdrawal from the Istanbul Convention on preventing and combating violence against women and domestic violence. Lastly, demonstrations against the deteriorating economic conditions in Lebanon and the exchange rate to the US dollar continued and saw a sharp increase across the country.

In Yemen, the renewed Houthi offensive on Marib city continued last week, with high levels of political violence recorded again in the governorate. Saudi-led coalition airstrikes continued at a sustained rate throughout the week. Armed clashes, however, decreased drastically in the second half of the week, with only two events reported between 28 June and 2 July. Whether this drop in armed clashes signals a new halt in the offensive, after intense combat from 18 to 27 June, remains to be determined.

Constrastingly, there was a significant increase in armed clashes in Al Bayda governorate last week. Pro-Hadi forces and Hazmiyah Resistance tribesmen launched an offensive on 2 July, targeting Houthi forces in As Sawmaah district in the east of the governorate. A number of locations were recovered from Houthi forces during this unexpected offensive. It is likely that pro-Hadi forces intensified fighting in Al Bayda, as a way to force Houthi forces to redirect their war effort and thus alleviate the pressure on Marib. Al Qaeda in the Arabian Peninsula (AQAP) also claimed a Katyusha rocket attack targeting Houthi forces in As Swamaah district.

Elsewhere in the country, after weeks of mounting tensions between the pro-Hadi and Southern Transitional Council camps in southern Yemen, armed clashes broke out in Abyan governorate. The rival groups fought over control of Lawdar district’s Security Department.

In Saudi Arabia, Houthi forces continued to ramp up their drone and missile attacks in Asir and Najran provinces last week. Saudi forces claim to have intercepted most of them.

Meanwhile, US warplanes launched airstrikes on pro-Iran militia positions in Syria and Iraq on 28 June, in response to repeated attacks against US and Coalition forces in Iraq. In Iraq, US airstrikes targeted three positions of the Sayyid al Shuhada Brigade and the Kataib Hezbollah Brigades of the Popular Mobilization Forces (PMF) near the Syrian-Iraqi border within Al Qaim district. The strike killed four members of the Sayyid al Shuhada Brigade and injured several PMF members. In Syria, the strikes also targeted Sayyid al Shuhada and PMF positions in Al Heri village in Deir-ez-Zor, near the border. Nine PMF members were killed and several others were wounded, including civilians (BBC, 28 June 2021). The strikes mark the second attack on pro-Iran militias since US President Biden took office in January 2021.

Meanwhile, Turkish forces and opposition rebels clashed with Syrian Democratic Forces (QSD) on the Menbij front in the eastern Aleppo countryside. The clases follow Turkish and opposition shelling barrages on QSD positions in the area. In the greater Idleb area, Russian warplanes launched airstrikes coinciding with regime shelling barrages in the area, though no casualties were reported.

In Palestine, anti-government demonstrations continued last week in response to the killing of activist Nizar Banat by Palestinian Authority (PA) security officers on 24 June. In response to the demonstrations, the Fatah Movement organized several demonstrations in support of President Mahmoud Abbas and the PA. Meanwhile, unidentified Palestinian militants launched incendiary balloons from the Gaza Strip into Israel, causing at least four fires to erupt. In retaliation, Israeli military warplanes targeted a Hamas Movement position within the Gaza Strip, causing material damages (The Guardian, 2 July 2021). Also in Palestine, the Night Confusion Unit continued their anti-settlement demonstrations on a near-daily basis, clashing with Israeli soldiers in Bayta, where Israeli settlers have aimed to expand the illegal settlement of Evyatar. On 2 July, settlers vacated the Evyatar settlement as part of a government deal, which will allow the settlement to remain intact and under military surveillance (Times of Israel, 2 July 2021).

In Turkey, police forces violently suppressed an LGBT Pride march in Istanbul and detained 46 protesters, including a journalist. Police forces subsequently intervened in two further protests against homophobia and transphobia in Ankara and Eskisehir. A large number of demonstration events were observed involving women’s groups last week, in defiance of the government’s decision to withdraw from the Istanbul Convention on preventing and combating violence against women and domestic violence. The largest such demonstration was attended by thousands on 1 July in Beyoglu, Istanbul, just hours after President Erdogan defended the withdrawal from the convention (Reuters, 1 July 2021). Clashes erupted with riot police, who used tear gas and water cannons against demonstrators.

Last week in Lebanon, nationwide demonstrations continued over worsening economic and living conditions, and the plummeting value of the national currency. Nearly a third of all demonstration events were accompanied by obstructive road blocking with tires and other obstacles. During a demonstration in Tripoli, demonstrators clashed with Lebanese military forces, leaving 11 soldiers and eight demonstrators wounded (El Nashra, 27 June 2021). The demonstrations continued to spike as the Lebanese pound fell to a record low for a second continuous week, having lost more than 90% of its value against the US dollar since the start of the economic crisis in October 2019 (Al Jazeera, 30 June 2021). Meanwhile, fights broke out in gas stations across Lebanon over the filling of fuel, amid a nationwide fuel shortage.