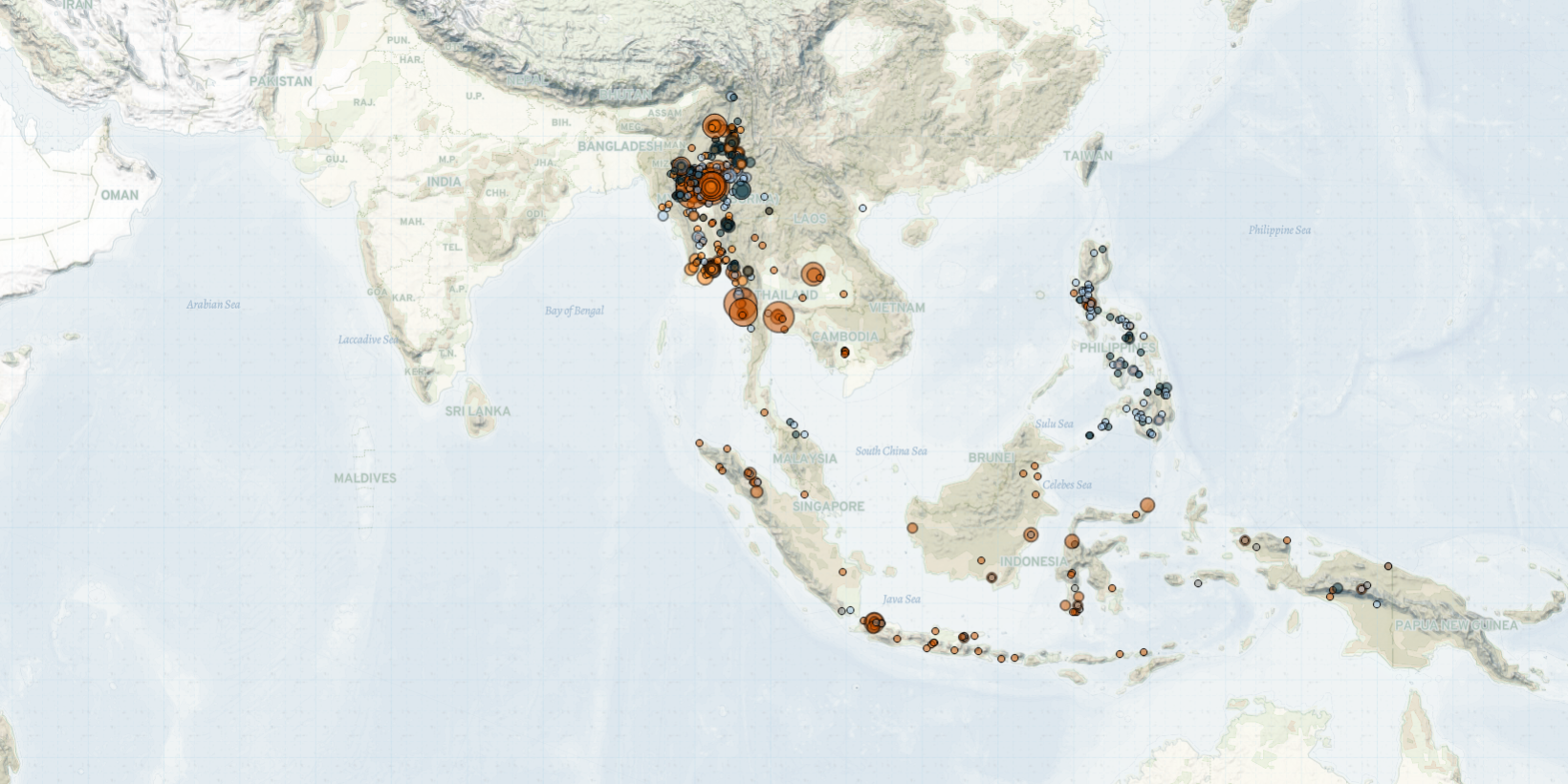 Last week in Southeast Asia, anti-coup protesters in Myanmar continued to demonstrate against the military regime. Meanwhile, over 2,200 detainees — including activists and journalists — were released on 30 June in a nationwide amnesty. Additionally, deadly clashes between the Myanmar military and People’s Defense Force (PDF) groups were reported in the Sagaing region. Meanwhile, territorial clashes between warring Shan armed groups continued in Shan state. In the Philippines, authorities announced the formation of a civilian volunteer group to counter criminality, prompting concerns from opponents and rights groups that the move could lead to the worsening of human rights abuses. Elsewhere, in Papua province, Indonesia, locals torched several government buildings in opposition to the Constitutional Court’s decision to disqualify two candidates from running in the regency elections. Finally, in Thailand, anti-government demonstrations continued despite COVID-19 restrictions on public gatherings.

Five months after the 1 February coup, anti-coup demonstrators in Myanmar continue to stage rallies in opposition to the military regime, despite crackdowns by security forces. Last week, protests were largely concentrated in Mandalay, Sagaing, Tanintharyi, and Yangon regions, as with previous weeks. On 26 June, demonstrators took to the streets to mark the death anniversary of student leader Salai Tin Maung Oo, who was executed 45 years ago under the previous military junta (Irrawaddy, 26 June 2021; Myanmar Now, 26 June 2021).

Separately, on 30 June, the military regime released more than 2,200 detainees across the country, including political prisoners and journalists (AP, 1 July 2021). However, prominent activists and politicians from the National League for Democracy (NLD) remain in custody. Critics have expressed skepticism and have suggested that the nationwide amnesty was merely a stunt to gain international recognition (RFA, 30 June 2021). The Assistance Association of Political Prisoners (AAPP), a human rights group that has been publishing lists of political prisoners since the coup, issued a statement warning that the regime is “only trying to make the case to be given credentials at the UN in September” (AAPP, 30 June 2021). It is expected that both the military regime and the National Unity Government will be presenting their credentials before the United Nations’ Credentials Committee in September as the representative of Myanmar at the General Assembly (Burma News International, 24 June 2021).

Meanwhile, clashes between the Myanmar military and local PDF groups continued in the Sagaing region last week. The PDF groups claim that the military suffered heavy casualties during the clashes over the weekend (Irrawaddy, 28 June 2021; Myanmar Now, 29 June 2021). Notably, locals claim that the Kachin Independence Organization/Kachin Independence Army (KIO/KIA) assisted local PDF groups during several clashes with the military last week. The KIO/KIA has refuted these claims, stating that no orders were issued by its leadership to join these clashes, although some of their soldiers may have provided support in these clashes in their individual capacity (Myanmar Now, 29 June 2021). Elsewhere, in Katha township, Sagaing region, clashes between the Myanmar military and the KIA/KIO continued.

In Shan state, clashes between the two rival Shan ethnic armed organizations (EAOs) — the Restoration Council of Shan State/Shan State Army-South (RCSS/SSA-S) and the Shan State Progress Party/Shan State Army-North (SSPP/SSA-N) — increased last week. The two sides continue to clash over territorial disputes, despite calls by locals to end the conflict. Public frustration with the armed groups mounted in Namhkan township after a youth leader died in SSPP/SSA-N detention. On 28 June, following his death, over 200 people protested to express their anger at the SSPP/SSA-N (Burma News International, 29 June 2021). During the march, unidentified assailants targeted protesters with bombs, but accidentally killed two of their own men instead. Two civilians were also injured by the blasts (Burma News International, 1 July 2021).

In the Philippines, reports of drug violence remain relatively muted relative to earlier weeks. However, the lull comes amid the formation of the “Global Coalition of Lingkod Bayan Advocacy Support Groups and Force Multipliers,” a civilian volunteer group envisioned to assist police in fighting crime (Philippine National Police, 26 June 2021). In a speech announcing the coalition on 25 June, President Rodrigo Duterte floated the idea of arming these civilian volunteers to help enforce the law (Bulaltlat, 3 July 2021). This comes amid the president’s past rhetoric on the drug war, which many consider to be equivalent to giving “permission to kill” (BBC, 4 June 2020), which has led to a rise in anti-drug vigilantism across the country over the years.The Philippine National Police has publicly supported the president’s idea of the civilian volunteer group, claiming that it encourages “volunteerism and definitely not vigilantism,” particularly with regard to illegal drugs and the communist insurgency (Philippine News Agency, 27 June 2021).  This prospect has been roundly condemned by human rights groups and critics of the government, who warn that it could lead to increased vigilantism and could worsen human rights abuses in the country (Philippine Daily Inquirer, 29 June 2021; HRW, 1 July 2021). Reports of civilian fatalities — including children — during the government’s anti-drug and anti-communist operations have elicited strong condemnation from advocacy groups (Philippine Daily Inquirer, 22 June 2021; Davao Today, 18 June 2021).

In Papua province, Indonesia, fighting between Papuan separatists and state forces decreased last week. Nonetheless, civilians were displaced by rioting that saw the burning of several government buildings in the Yalimo regency. Local rioters set fire to eight government buildings after the Constitutional Court disqualified a pair of candidates running for the regency elections because one of the candidates was found to have been convicted in a criminal case (Kompas, 1 July 2021; Liputan6, 29 June 2021). The rioters also destroyed the bridge connecting the Yalimo regency to the neighboring Jayawijaya regency. Following this, nearly 1,000 villagers fled their homes to seek shelter at nearby security posts and churches (Kompas, 1 July 2021).

Lastly, in Thailand, anti-government protesters continued to take to the streets last week, despite the introduction of a ban on gatherings of more than 20 people in light of rising COVID-19 infections (Thai PBS World, 27 June 2021). Notably, protests by the United People for Thailand (UPT) — also known as Thai Mai Thon — that took place alongside protests by the People’s Party movement — also known as Ratsadon — increased last week. The leader of the UPT, which was formed in April, had earlier announced that he would not make any demands on monarchy reform — a key demand of the People’s Party movement — and would instead focus primarily on ousting Prime Minister Prayut Chan-o-cha (Bangkok Post, 4 April 2021). His stance drew criticism from some commentators, who saw it as a stumbling block to a more progressive future (Khaosod, 10 April 2021). It also prompted People’s Party protesters to pledge to distance themselves from his movement (Bangkok Post, 10 April 2021).